“Freedom of the press is guaranteed only to those who own one” (Liebling, 1964). With the explosion of publishing platforms made possible by the Internet, this quote from Liebling rings truer today than it did in the 1960s. The demise of the journalistic watchdog and the rise of the citizen journalists (Bruns, 2008) have created a dynamic that means it is up to the reader to navigate between professional journalism, irresponsible click-bait, opinion blog posts, and agenda driven articles. Grassroots reporting (blog indexes, personal blogs) and the rise of citizen journalism have created an active audience that not only follows the news, but contributes (Bruns, 2008). The journalistic role of gatekeeping, filtering information before publishing, has diminished, transforming the role instead to gate watcher (Bruns, 2008) or scout in the jungle of information (Brüggemann, 2017), leaving journalists to filter information which is already published. With no dedicated watchdog, open publishing platforms allow everyone with access to the internet to have a voice. This, in turn, is enabling content that is directly or indirectly guided or influenced by those who may carry subjective, agenda-driven intentions, be it an organization, NGO, advertiser, broadcaster, or individual science communicator.

This is blurring the boundaries between environmental journalism and advocacy (Rosenstiel et al., 2016) which we, the authors, believe can have both a positive and negative impact on the way readers understand and interpret marine conservation. In some fields this is allowing more

extensive reporting on events such as climate conferences (Rosenstiel et al., 2016), yet it is also creating the opportunity for self-promotion, which depending on the agenda of the writer, can pose threats to the public's objective understanding of marine conservation and the issues facing the planet.

Recently, an opinion piece published in the New York Times discussed the trend of “just add water” that is seeing the triumphant announcement of large marine protected areas, which are protecting relatively empty waters as opposed to prioritizing coastal habitats that are home to 25% of all marine species (Rocha, 2018). While this opinion is not shared by all scientists (MacPherson, 2018), others (Barnes et al., 2018) stress the need to report outcomes as opposed to area when it comes to announcing new protected areas, arguing that the focus should be on anticipated biodiversity gains rather than the square kilometers protected. The root of this problem may, in fact, lie with the issuer of the original press release (e.g., an NGO) or the opinion piece may have been politically motivated. Crucially, there is an issue of transparency which needs to be improved from both sides: the source (the issuer of the press release) and the entity covering the story.

Another difficulty is simply distinguishing between science journalism—a responsibility to inform and educate the public (Xu, 2013), assess, critique and contextualize science and scientists rather than promote it (Borel, 2015), and science communication, which explains how a natural phenomenon works or describes “the how” of new scientific discoveries. The important difference is that how science communicators portray their topic depends on their intentions, which should be transparent (Borel, 2015). Xu argues that the ability for scientists to publish directly to the general public, without going through the official publishing process, is creating a new “science-media ecosystem.” Though a direct link between scientists and the public can be beneficial, journalist Brooke Borel highlights the importance of journalistic scrutiny in questioning the intentions of scientists or organizations publishing their own scientific outreach (Borel, 2015).

While some argue that we are in an “Unlikely Golden Age” at the height of production in terms of both quantity and quality of science and environmental journalism (Hayden and Check Hayden, 2018), we believe that despite this, there is a lack of capacity when it comes to reporting on marine conservation. An example is a recent article by The Guardian (Summers, 2018) which reports on a new scientific study concerning a controversial whale shark tourism site in the Philippines (which one of the authors and her team studies). The journalist reports only one side of the controversy, omitting all previous research from the same study site, and fails to include an outside quote. The article also reported illegal activity which lacked original sources.

The implications of poorly executed journalism such as this are far reaching. They can miseducate the public on complex topics and undermine conservation efforts. Are journalists at capacity and not able to dedicate their full time to covering marine conservation, similar to that of other environmental journalists (Detjen et al., 2000)? Or are there simply too few experts, with only a small group of journalists producing the vast majority of coverage (Brüggemann and Engesser, 2014)? Either way, how can this knowledge gap be moderated?

Communication professionals in NGOs can mitigate a lack of journalistic capacity in the marine conservation space if they commit to balanced, transparent self-reporting, and to help independent and objective reporting. However, this is not always the case. Mongabay's 2016 Conservation, Divided series highlighted that the biggest NGOs often issue “press releases that could convince a misanthrope to love people [and] make whatever they do sound like a resounding success, even when the reality is much more complex” (Hance, 2016). Biased self-reporting can also be off-putting for donors. A recent analysis commissioned by ISEAL, the global best practice community of standard setters, found that funders are more likely to believe communications that contain negative as well as positive impact (Chilvers, 2017). This suggests there is an opportunity for professional marine conservation communicators to contribute to objective reporting while improving relationships with key partners.

Finally, whether or not coverage of marine conservation efforts is the result of sponsored or embedded arrangements (e.g., a journalist given access to a remote marine location through an NGO sponsorship), conservation communicators must permit journalistic contents to be produced independently with objectivity and independence needed in the persuasion of the truth.

We believe there is a need for a code of professional ethics for marine conservation communicators that promotes trust, accountability, independence, and solutions-based reporting, all the while furthering the value of a compelling story. These guidelines (Table 1) draw together existing resources as well as emerging areas of focus and can be used as a tool by communication practitioners and scientists to create a professional ethics code, but can also be adopted by journalists and other content creators. Acknowledging the limitations of our own knowledge and the small sample size of opinions collated, we present them not as a final or comprehensive list, but as a starting point for much needed future collaborative work in this space. 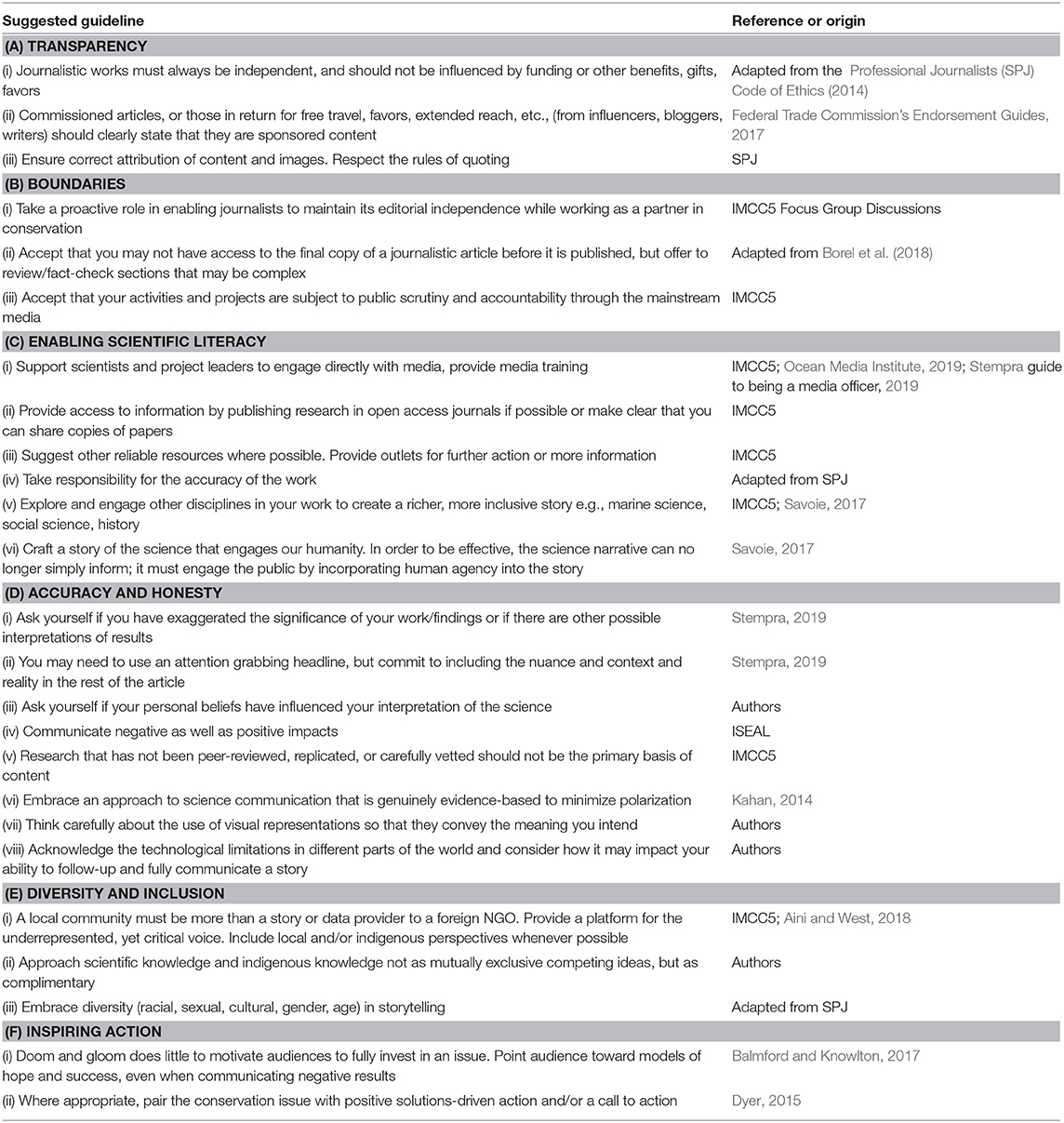 Table 1. Suggestions to include in a code of professional ethics for marine conservation communicators.

In conclusion, no matter how much conservation groups have sway over social media and public relation platforms, those are not a replacement for independent journalism. While we should continue to strongly advocate for conservation, we should not make it difficult for journalists to inform the debate with facts and a commitment to making all voices heard. We hope this article will spark a conversation about the necessity of a code of professional ethics for marine conservation communicators.

MU conceived the idea and scope of problem. GS, LE, MU, and SS devised main conceptual ideas and designed the article. SS and LE took notes at the focus group discussion. All authors provided critical feedback and contributed to develop the final manuscript.

No funding was received for this work. Open access fees sponsored by Marine Stewardship Council (MSC).

4. Borel B. (2015). The Problem With Science Journalism: We've Forgotten That Reality Matters Most. The Guardian. Available online at: https://www.theguardian.com/media/2015/dec/30/problem-with-science-journalism-2015-reality-kevin-folta (accessed February 21, 2019).

9. Chilvers A. (2017). Guidelines for Effective Communication of the Impact of Sustainability Initiatives. London: Kayak Gold Consulting on behalf of ISEAL. Consultant report available upon request.

24. Stempra (2019). Guide to Being a Media Officer. Available online at: https://petition.parliament.uk/petitions/241584?fbclid=IwAR3beySOJey8-T3CAPJYsCE7WUXjxnq0desqYhAomsCVmtERHLCL_9JTUJI (accessed March 22, 2019).

Copyright © 2019 Erickson, Snow, Uddin and Savoie. This is an open-access article distributed under the terms of the Creative Commons Attribution License (CC BY). The use, distribution or reproduction in other forums is permitted, provided the original author(s) and the copyright owner(s) are credited and that the original publication in this journal is cited, in accordance with accepted academic practice. No use, distribution or reproduction is permitted which does not comply with these terms.