Mitochondrial dysfunction is at the heart of neurodegeneration (Karbowski and Neutzner, 2012), since neuronal cells are especially dependent on high fidelity mitochondria to meet their extraordinary energy demand. Loss of mitochondrial fidelity due to accumulation of damage is thought to be one of the central mechanisms for the death of neuronal cells associated with virtually all neurodegenerative disorders as well as aging. Damage to mitochondria is caused mainly through reactive reaction intermediates of the mitochondrial electron transport chain (ETC) namely reactive oxygen species (ROS) and reactive nitrogen species (RNS). Main targets of ROS and RNS are mitochondrial proteins as well as mitochondrial DNA but also mitochondrial lipids. Especially damage to proteins of the ETC and to mitochondrial DNA, which codes mainly for ETC components, impacts mitochondrial health as a subpar ETC gives rise to even more reactive intermediates through electron leakage. Various repair, salvage, and maintenance mechanisms are in place to deal with such stresses and to keep mitochondria in a healthy and functional state. On the level of mitochondrial DNA, various repair mechanisms are active, drawing from the large redundancy of mitochondrial DNA with up to 10,000 copies per cell (Bogenhagen and Clayton, 1974). On the protein level, removal of damaged proteins takes place via specialized proteases in the matrix and inner mitochondrial membrane (Rugarli and Langer, 2012) or through the ubiquitin–proteasome system during outer mitochondrial membrane-associated degradation (OMMAD; Neutzner et al., 2007). On the organellar level, the mitochondrial network is maintained through dynamic fission and fusion of mitochondrial tubules essential for adaption of the network to cellular demand (Youle and van der Bliek, 2012). Furthermore, removal of irreparable mitochondrial subunits by mitophagy, a specialized autophagic process, is essential for maintaining organellar fidelity (Youle and Narendra, 2011). Lastly, on the cellular level, irreparable damage to the mitochondrial network causes the induction of apoptosis, thus constituting a complete removal of dysfunctional organelles (Tatsuta and Langer, 2008; Karbowski and Neutzner, 2012). In the case of neuronal tissue with its very limited capacity for regeneration, induction of the cell death program is deleterious and results in the irreparable loss of neuronal function leading ultimately to neurodegenerative disease.

Here, treatment of SH-SY5Y neuroblastoma cells with the dopaminergic and noradrenergic neuron-specific ROS generator 6-OHDA, the mitochondrial ETC complex I inhibitor rotenone, or the Aβ peptide was employed to study mitochondrial function in a model for neuronal cells under neurodegenerative stress. As revealed by cytochrome c staining, following treatment with 6-OHDA (Figure 1B), rotenone (Figure 1C), or Aβ peptide (Figure 1D) the mitochondrial network is considerably fragmented when compared to control cells (Figure 1A). The extent of mitochondrial fragmentation was strongest with 6-OHDA, still strong following rotenone and less pronounced after Aβ treatment. These data are consistent with mitochondrial fragmentation in neuronal cells in response to neurodegenerative stress evoked by exogenous ROS, mitochondria-generated ROS as well as mitochondrial dysfunction due to Aβ, respectively. 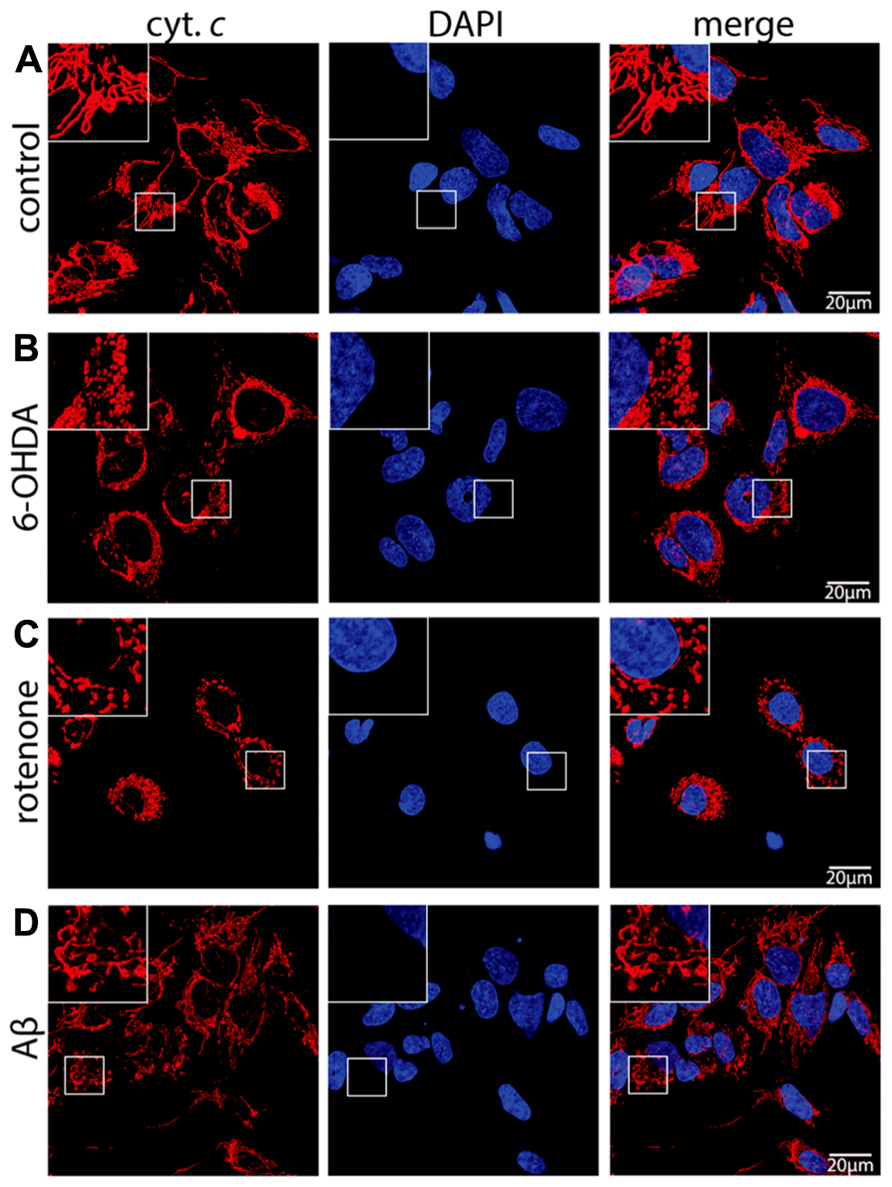 To study the role of MARCH5 in the mitochondrial response to neurodegenerative stress in neuronal cells, wildtype MARCH5, ubiquitin ligase activity negative MARCH5H43W, or mitochondria-targeted yellow fluorescent protein (mitoYFP) as control were stably expressed in SH-SY5Y cells. As shown in Figure 2A and consistent with previous observations in HeLa cells (Karbowski et al., 2007), expression of MARCH5 in SH-SY5Y cells had no discernible impact on mitochondrial morphology, while expression of dominant-negative MARCH5H43W caused considerable elongation of the mitochondrial network when compared to control cells. In addition and as also reported previously (Karbowski et al., 2007), MARCH5H43W localized to distinct sub-mitochondrial foci in SH-SY5Y cells while wildtype MARCH5 localized to mitochondria in a circumscribing fashion. 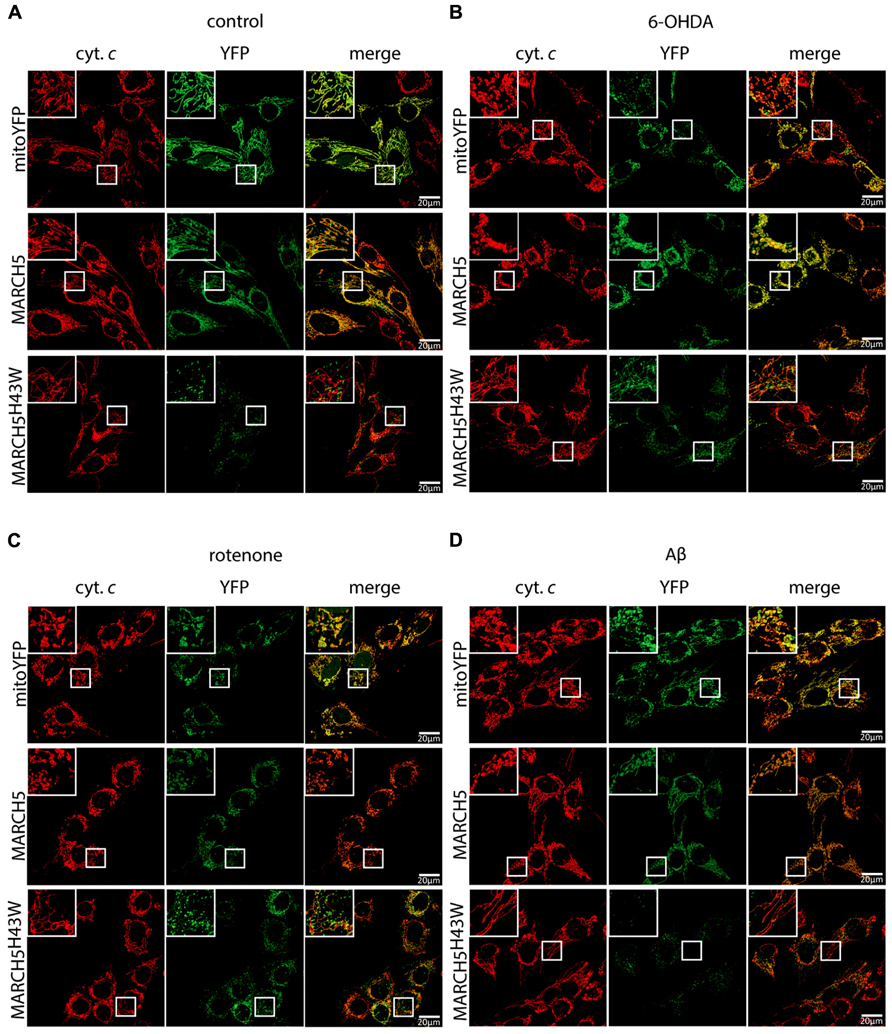 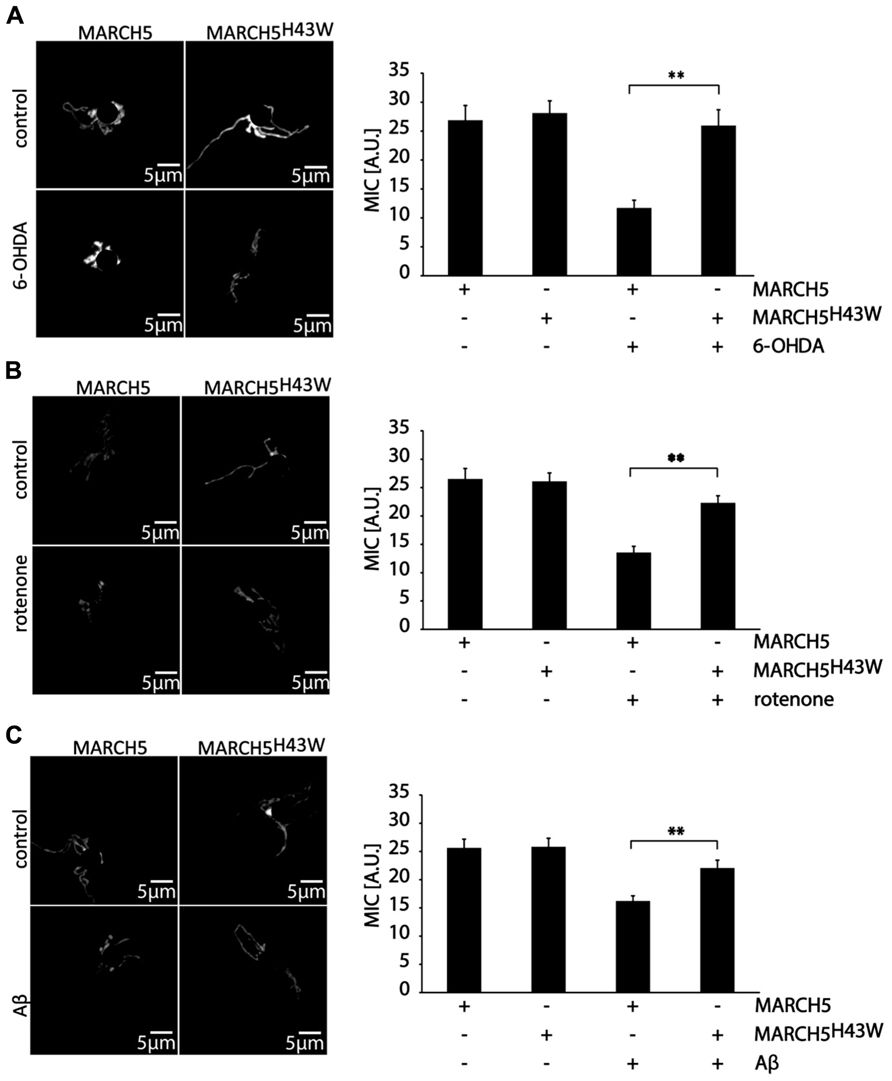 FIGURE 3. Inactive MARCH5 supports mitochondrial interconnectivity under neurodegenerative stress conditions. SH-SY5Y co-transfected with expression plasmids for PA-GFP and either MARCH5 or MARCH5H43W were treated with 75 μM 6-hydroxydopamine for 6 h (A), 5 μM rotenone for 6 h (B), or 25 μMAβ peptide for 24 h (C) and mitochondrial interconnectivity was measured following activation of PA-GFP in a small area of the mitochondrial network. Shown is one representative picture and the average of three independent experiments with 15 cells each/condition. Statistical significance was analyzed using Student’s t-test with ** marking p < 0.01. Error bars represent SEM.

To further gain insight into the mechanisms responsible for MARCH5H43W-mediated protection from neurodegenerative stress, cellular levels of ROS were assessed using single cell analysis of CellRox fluorescence. To this end, first, ROS levels were measured in cells expressing MARCH5, MARCH5H43W or mitoYFP and no significant difference between either group was detected (Figure 5A). Analysis of MARCH5 or MARCH5H43W expressing cells treated with 6-OHDA revealed an increase in intracellular ROS in MARCH5 cells, while expression of MARCH5H43W prevented this 6-OHDA-mediated spike in ROS almost completely (Figure 5B). Similarly, expression of MARCH5H43W was able to blunt ROS production following treatment with rotenone, while ROS levels were elevated about twofold in MARCH5 expressing cells compared to untreated MARCH5 expressing control cells (Figure 5C). As for mitochondrial stress evoked by treatment with Aβ, ROS levels in MARCH5H43W expressing cells were about 50% compared to cells producing MARCH5. However, Aβ treatment caused still an increase in ROS even in the presence of inactive MARCH5, albeit to a lower extent compared to control cells (Figure 5D).

FIGURE 5. Inactivation of MARCH5 blunts ROS production under neurodegenerative stress conditions. (A) SH-SY5Y cells expressing mitoYFP, MARCH5-YFP, or MARCH5H43W-YFP were treated with the ROS-sensitive dye CellROX and intracellular ROS levels were measured using image analysis of confocal pictures. SH-SY5Y cells expressing MARCH5-YFP or MARCH5H43W-YFP were treated with 75 μM 6-hydroxydopamine for 6 h (B), 5 μM rotenone for 6 h (C), or 25 μMAβ peptide for 24 h (D) and mitochondrial membrane potential was measured as in (A). Shown is the average of four independent experiments with 10 cells per condition. Statistical significance was analyzed using Student’s t-test with ** marking p < 0.01 and n.s. marking no significant difference. Error bars represent SEM.

Statistical analysis was performed using unpaired, two-tailed Student’s t-test as implemented in Microsoft Excel. A p-value of <0.05 or smaller was considered statistically significant and is marked with *, while p-values of <0.01 are marked with **. Error bars represent the standard error of the mean (SEM).

While MARCH5 is involved in the removal of proteins associated with specific neurodegenerative disorders such as ataxin-3 in Machado–Joseph disease or mSOD1 in amyotrophic lateral sclerosis likely supporting mitochondrial function, MARCH5 activity during general mitochondrial oxidative stress does not seem to confer a protective effect. Mitochondrial fragmentation in response to oxidative insults evoked by external ROS generators such as 6-OHDA or internal ROS generators such as rotenone or Aβ was greatly diminished in cells expressing MARCH5H43W, while wildtype MARCH5 did not prevent the remodeling of the mitochondrial network in response to stress. Thus it is conceivable that during neurodegenerative stress, removal of damaged proteins from mitochondria through MARCH5 seems not to be as essential as one might expect from an ubiquitin ligase involved in mitochondrial protein quality control. Rather, the function of MARCH5 as mitochondrial morphogen modulating Drp1 activity might be important in this context. And indeed we previously showed that inactivation of MARCH5 protects neuronal cells from stress-induced cell death (Fang et al., 2012) likely through the inhibition of Drp1-dependent mitochondrial fragmentation in accordance with previous observations where inhibition of Drp1 activity strongly delayed cell death (Frank et al., 2001). Thus, the function of MARCH5 in regulating mitochondrial morphology might also be the main factor in the here observed positive effect on mitochondrial fidelity upon expression of dominant-negative MARCH5H43W. Fragmentation of the mitochondrial network is a response to potentially lethal stress conditions such as increased oxidative stress or loss of membrane potential. As mitochondrial fragmentation is an integral part of the apoptotic program with forced fragmentation sensitizing cells to apoptotic stimuli (Lee et al., 2004), shortening mitochondria does not seem to have a protective effect on cells but might rather be seen as preparation for starting the cell death program although mitochondrial fission per se is not an apoptotic stimulus (Youle and van der Bliek, 2012). In contrast, elongation of mitochondria seems to be protective as evidenced by de-sensitization to apoptotic stimuli following increased mitochondrial fusion (Neuspiel et al., 2005). Also during stress-induced mitochondrial hyperfusion (SIMH), enhanced fusion and therefore highly interconnected mitochondrial tubules prove to increase resistance against certain stresses (Tondera et al., 2009). While most experimental stress conditions induce mitochondrial fragmentation, stress at levels well below the apoptotic threshold induces mitochondrial elongation. The SIMH-associated adaption of mitochondrial morphology is brought about in an Mfn1- and OPA1-dependent but Mfn2-independent manner and is likely not achieved by forced mitochondrial elongation due to inhibition of Drp1 function (Tondera et al., 2009). The increased interconnectivity during SIMH conditions mitochondria against further stress potentially by boosting their ATP production likely via increased availability of substrates and ETC intermediates in fused mitochondrial reticulum with its extended matrix space. Whether inactivation of MARCH5 induces SIMH is unclear as mitochondrial elongation in the absence of external stress is evident in MARCH5H43W expressing cells, however, the observed increase of mitochondrial membrane potential in unstressed cells and the blunting of stress-induced ROS production point in this direction. This leaves the question, which additional pathways besides inhibition of Drp1-mediated fission might be influenced by MARCH5H43W as simply inhibiting Drp1 does not seem to evoke SIMH (Tondera et al., 2009). Based on our results, one might speculate that MARCH5 as upstream regulator of Drp1 is important during cellular stress responses and might modulate the activity of other targets besides Drp1. The notion of MARCH5 regulating other such targets is supported by our observation that expression of wildtype MARCH5 did not preserve mitochondrial function under neurodegenerative stress conditions although no effect on mitochondrial interconnectivity was observed (Karbowski et al., 2007). Importantly, expression of MARCH5 in the absence of stress conditions did not impact mitochondrial membrane potential or ROS production further hinting to a role for MARCH5 during mitochondrial stress. Thus, based on our observations following dominant-negative MARCH5H43W expression and the effects of wildtype MARCH5, it seems conceivable that MARCH5 is involved in the decision for stress-induced fragmentation versus protective mitochondrial elongation. Taken together, our data further support a role of MARCH5 in the modulation of Drp1 activity during mitochondrial fission and implicate MARCH5 in mitochondrial stress response pathways. As the mitochondrial stress response is pathophysiologically significant from diabetes to cardiovascular disease to neurodegeneration, blockage of MARCH5 might be an interesting therapeutic strategy.

This work was supported by SNF grants (31003A_129798 and 31003A_146118), a grant of the Gottfried und Julia Bangerter-Rhyner foundation to Albert Neutzner as well as grants from the Chinese Scholarship Council to Lei Fang and Jia Li. The authors want to acknowledge the imaging facility and the FACS facility of the Department for Biomedicine, University Hospital Basel for outstanding technical support.

Copyright © 2013 Fang, Li, Flammer and Neutzner. This is an open-access article distributed under the terms of the Creative Commons Attribution License (CC BY). The use, distribution or reproduction in other forums is permitted, provided the original author(s) or licensor are credited and that the original publication in this journal is cited, in accordance with accepted academic practice. No use, distribution or reproduction is permitted which does not comply with these terms.