Background: Diffusion tensor imaging (DTI) allows the analysis of changes in microstructure, through the quantification of the spread and direction of water molecules in tissues. We used fractional anisotropy (FA) maps to compare the integrity of WM between patients and controls. The objective of the present study was to investigate WM abnormalities in patients with frontal lobe epilepsy secondary to focal cortical dysplasia (FCD). Materials and Methods: We included 31 controls (12 women, 33.1 ± 9.6 years, mean ± SD) and 22 patients (11 women, 30.4 ± 10.0 years), recruited from our outpatient clinic. They had clinical and EEG diagnosis of frontal lobe epilepsy, secondary to FCD detected on MRI. Patients and controls underwent 3T MRI, including the DTI sequence, obtained in 32 directions and b value of 1000 s/mm2. To process the DTI we used the following softwares: MRIcroN and FSL/TBSS (tract-based spatial statistics). We used a threshold-free cluster enhancement with significance at p < 0.05, fully corrected for multiple comparisons across space. Results: Areas with FA reduction in patients were identified in both hemispheres, mainly in the frontal lobes, cingulum, and forceps minor (p = 0.014), caudate e anterior thalamic radiation (p = 0.034), superior longitudinal fasciculus (p = 0.044), uncinate fasciculus, and inferior fronto-occipital fasciculus (p = 0.042). Conclusion: Our results showed a widespread pattern of WM microstructural abnormalities extending beyond the main lesion seen on MRI (frontal lobe), which may be related to frequent seizures or to the extent of MRI-invisible portion of FCD.

Epilepsy secondary to focal cortical dysplasia (FCD) usually begins early in life, is often refractory to antiepileptic drug (AED) therapy, and a frequent cause of focal motor status or focal epilepsy, which may be life-threatening (Desbiens et al., 1993). The term FCD designates a spectrum of abnormalities of the laminar structure of the cortex (Guerrini and Parrini, 2010; Blümcke et al., 2011) and is present in a significant proportion of epilepsy surgical series, in particular in the pediatric population (Fauser et al., 2006; Blümcke et al., 2011).

Barkovich et al. (2001) classified different types of FCD as malformations due to abnormal neuronal proliferation or due to abnormal cortical organization, that may be located in areas of eloquent cortex. In addition, the epileptogenic zone may be more extensive than the lesion visualized on MRI alone (Palmini et al., 1995; Rosenow et al., 1998). Intracranial EEG recordings have demonstrated that epileptic activity exhibits complex propagation patterns within and between hemispheres (Duchowny et al., 2000), often extending beyond the MRI visible lesion (Tassi et al., 2002; Najm et al., 2007).

Diffusion tensor imaging (DTI) is a non-invasive imaging technique that can examine molecular diffusion of water within the brain by applying gradients in at least six non-collinear directions. DTI can evaluate white matter integrity and may detect abnormalities in earlier stages than conventional T2- or T1-weighted imaging (Pierpaoli et al., 1996; Lee et al., 2004). The measurement of white matter integrity used in this study is fractional anisotropy (FA), which is determined by the directional magnitude of water diffusion in three-dimensional space. The tract-based spatial statistic (TBSS) provides an automated whole brain voxel-by-voxel analysis of FA without a priori bias for different brain regions.

The aim of this study was to investigate white matter changes in patients with frontal lobe epilepsy due to FCD using DTI.

We studied 31 controls (12 women, 33.1 ± 9.6 years, mean ± SD) and 22 patients (11 women, 30.4 ± 10.0 years) with MRI defined FCD, recruited from our outpatient clinic at our University Hospital from May 2009 to April 2010. Informed consent was obtained for participation in the studies, approved by the Internal Review Board of our institution. 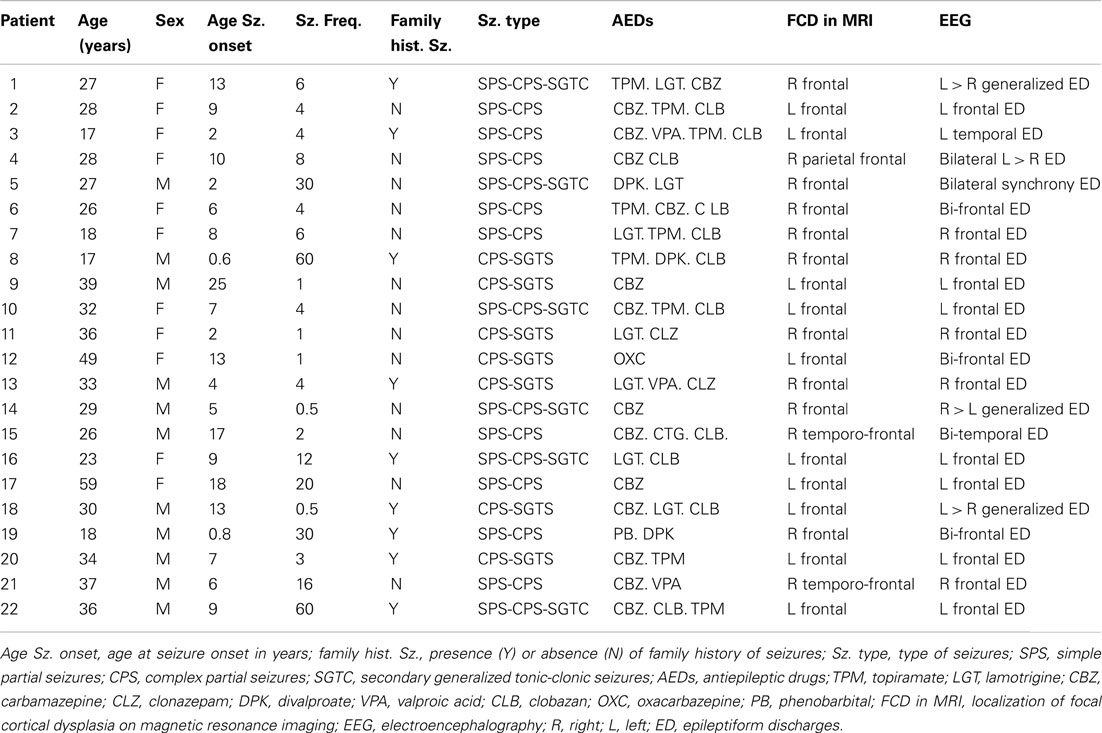 All patients were under investigation for epilepsy surgery and Table 1 shows the summary of their investigation. At this point only four of these patients have confirmation of FCD by pathology.

For processing the DTI, all imaging data were transferred to a cluster of Linux workstations. The structural images were visually inspected for any structural abnormalities by a neuroimaging expert. First DICOM images were converted to 4D-Nifti file using the MRIcroN program. Preprocessing and analyses of diffusion data was done with an in-house protocol using FSL. For voxelwise analysis of FA values we applied TBSS (also included in FSL), with threshold-free cluster enhancement with significance at p < 0.05, fully corrected for multiple comparisons across space (Smith et al., 2006). For localizing the significant results we used the atlases offered by FSL (http://www.fmrib.ox.ac.uk/fsl/data/atlas-descriptions.html#wm).

3. Comparison of FA values in all patients after flipping the images with right-sided lesions to the left side versus normal controls. 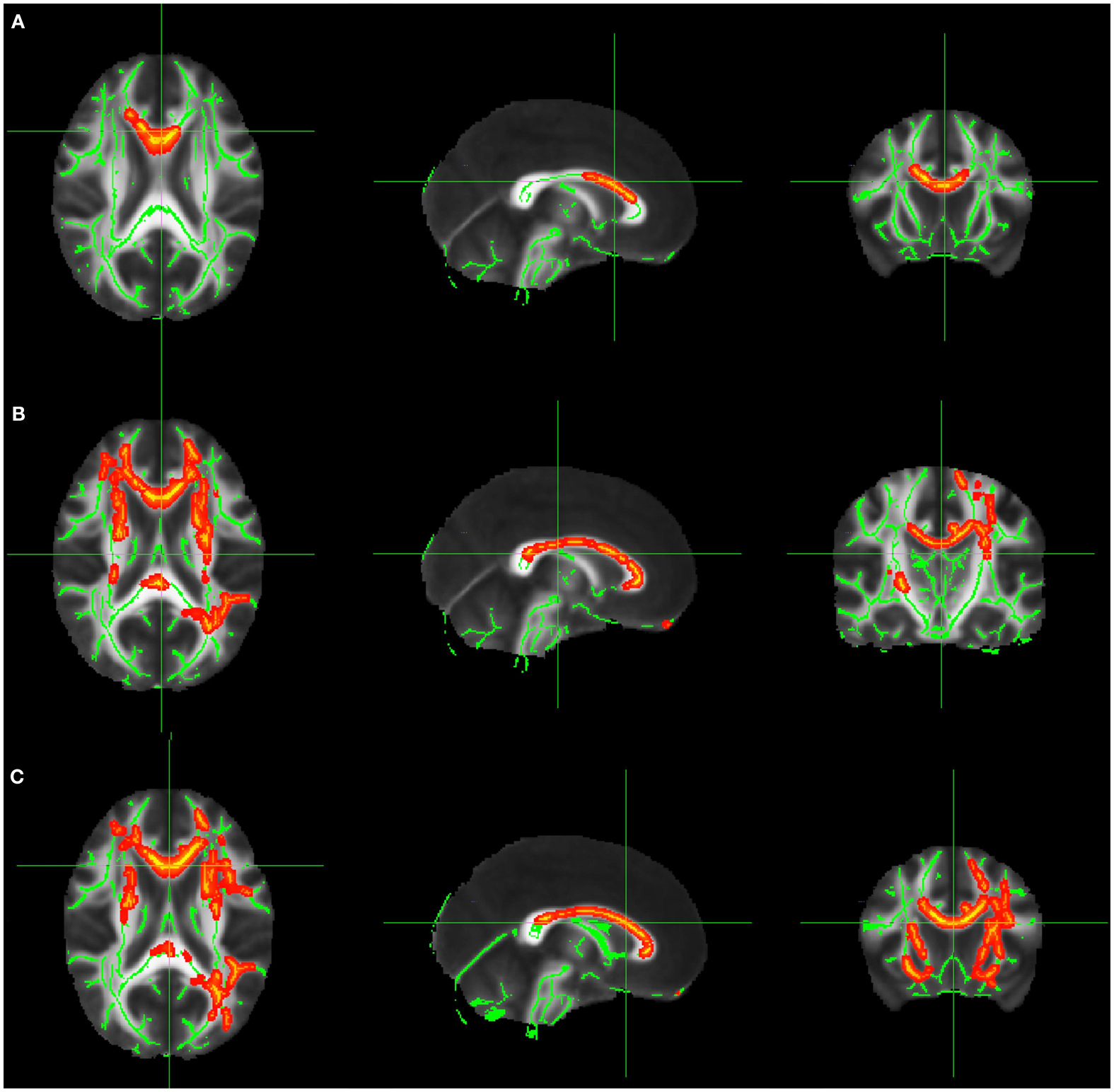 We found a widespread pattern of WM microstructural abnormalities extending beyond the MRI visible lesion and putative epileptogenic area in patients with frontal lobe epilepsy secondary to MRI identified FCD.

Both groups (left and right-sided MRI lesions) demonstrated bilateral and widespread FA changes; however, these were slightly more extensive in the group with left-sided FCD. Perhaps this could be related to the fact that the dominant hemisphere for language may be more vulnerable to damage.

In one study (Eriksson et al., 2001) of 22 epilepsy patients with FCD (although only four had MRI evidence of isolated lesions), all patients had DTI abnormalities corresponding to the MRI lesion. Fifteen of these patients had areas of structural disorganization as shown by decreased anisotropy or increased diffusivity values outside the lesion visible on conventional MRI (Eriksson et al., 2001).

Decrease of FA was also detected in the superior longitudinal fasciculus in both analyses. This is the largest fiber tract of the long association fiber system and connects the prefrontal, parietal, and temporal cortices (Catani et al., 2002). We also found FA reduction in the uncinate fasciculus, which connects the anterior temporal lobe with medial and orbital prefrontal cortex areas in a bidirectional way (Schmahmann and Pandya, 2006).

Reduced FA may indicate one of the three processes (or a combination of these): degradation of both axonal membranes and myelin (Beaulieu et al., 1996; Pierpaoli et al., 2001), abnormalities of myelin with sparing of the axons (Gulani et al., 2001; Song et al., 2002), or reduced density of myelinated axons (Takahashi et al., 2002).

Unfortunately, we were not able to perform correlations between EEG abnormalities and FA abnormalities, or between the extent of visible FCD and the degree of FA abnormalities, because this was a group analysis. Another limitation of this paper is that we had confirmation of FCD on histopathology in only four patients, since the others are still waiting or refused surgery.

Diffusion tensor imaging and tractography in patients with FCD may be useful in the detection and delineation of MRI-invisible structural abnormalities, and in determining both the connectivity of a given area of the cortex and the spatial relationship between the lesion and major white matter tracts.

Further studies need to be conducted to evaluate the usefulness of DTI for the delineation of white matter abnormalities in patients with epilepsy.

This research was supported by a grant from Fundação de Amparo à Pesquisa do Estado de São Paulo (FAPESP), process 2008/55997-1.

Table A1. Areas of significant reduction of FA values for the comparison of patients with right-sided focal cortical dysplasia lesions versus normal controls. 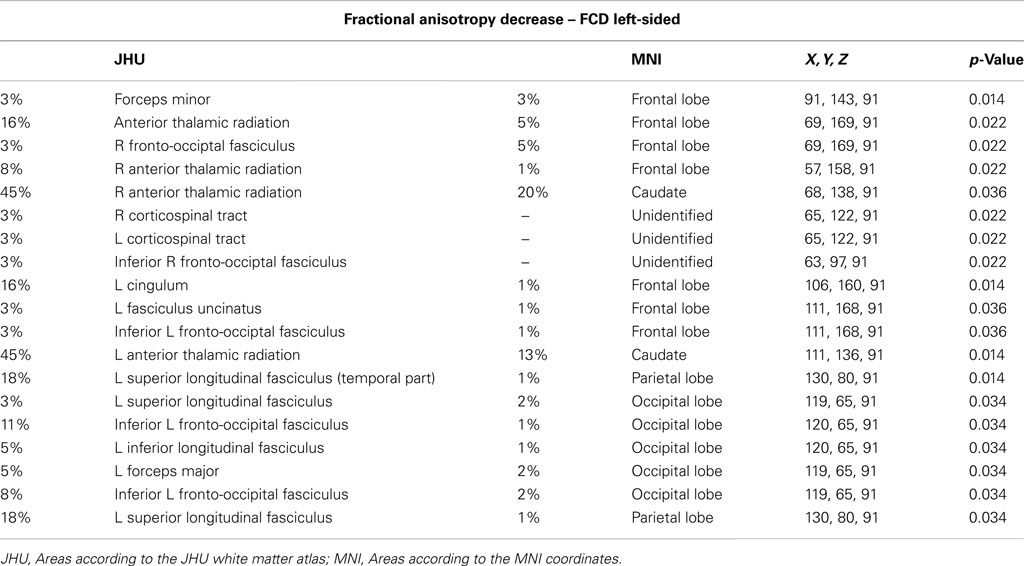 Table A2. Areas of significant reduction of FA values for the comparison of patients with left-sided lesions versus normal controls. 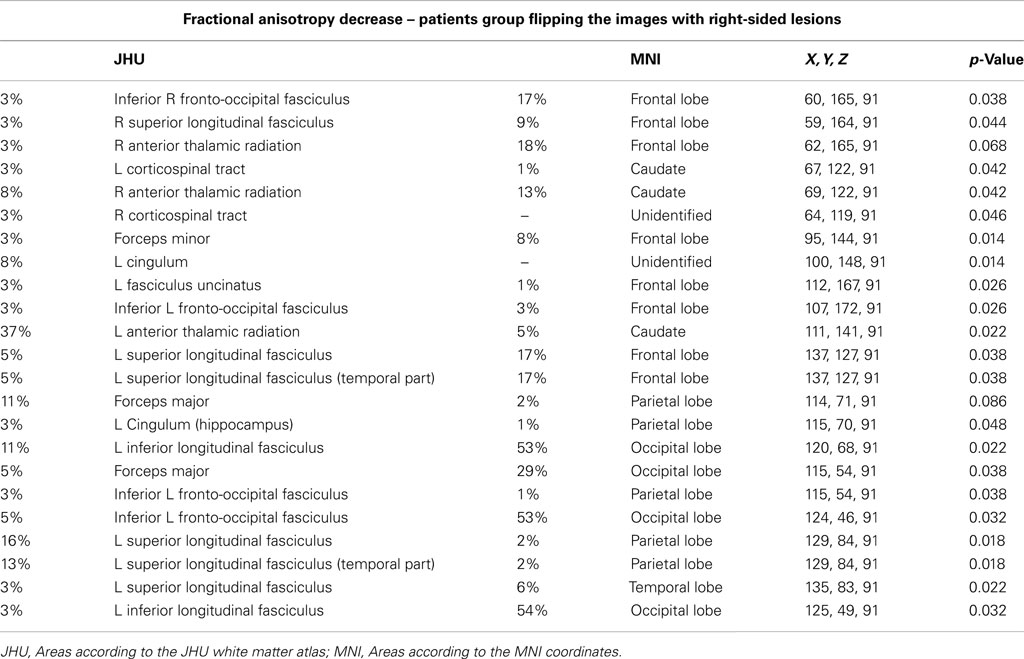 Table A3. Areas of significant reduction of FA values for the comparison of all patients after flipping the images with right-sided lesions to the left side versus normal controls.

Copyright: © 2012 Fonseca, Yasuda, Tedeschi, Betting and Cendes. This is an open-access article distributed under the terms of the Creative Commons Attribution License, which permits use, distribution and reproduction in other forums, provided the original authors and source are credited and subject to any copyright notices concerning any third-party graphics etc.