Methods:In the present study, 55 children with a body mass index (BMI) in the ≥95th percentile for age and sex were enrolled in a tertiary care hospital and underwent 24 h of ABPM and detailed biochemical investigations.

The epidemic of obesity, along with hypertension (HT) and cardiovascular disease, is a growing contributor to global disease burden (1). Studies have shown that pediatric hypertension is the strongest predictor of adult hypertension and increases cardiovascular mortality risk in adults (2). Measurement of blood pressure (BP) is difficult in children as there may be variations in BP in response to a number of physiological and environmental stimuli (3, 4). Ambulatory blood pressure monitoring (ABPM) may overcome these challenges and help in characterization of BP in children. The recent American Academy of Pediatrics (AAP) guidelines for screening and management of high blood pressure in children and adolescents included revised normative blood pressure tables based on normal-weight children and excluded overweight and obese children (2). The new guidelines recommends the use of ABPM for confirmation of HT in children, whenever feasible.

This is an observational study and was carried out in a tertiary care teaching hospital in central India. As per departmental protocol, all outpatient-registered children undergo anthropometry with a trained staff. For the present study, children aged 5–18 years with a body mass index (BMI) in the ≥95th percentile for age and sex were enrolled after obtaining written informed consent. Children with congenital malformations, chronic kidney disease, congenital heart disease, malignancy or bone marrow transplant, evidence of raised intracranial pressure, taking medications which are known to increase blood pressure, and other systemic illnesses associated with hypertension were excluded from the study. The study was carried out from December 2015 to December 2017.

For ambulatory blood pressure monitoring (ABPM), a Meditech ABPM-05 device was use (8). The patients underwent 24 h ABPM with an appropriately sized cuff. ABPM was applied to the non-dominant arm and the device was programmed to record BP every 20 min during waking hours and 30–60 min during sleeping hours. After application of ABPM, 3 resting office BP measured with an oscillometric device was compared with the readings obtained through ABPM. Agreement of an average 3 office and 3 ABPM levels within 5 mm Hg was considered appropriate (9). Parents were instructed to maintain a diary of daily activity, sleep, awake time, and medications taken. ABPM variables were reported as mean ambulatory systolic blood pressure (SBP), mean diastolic BP during a 24 h period, daytime and nighttime periods, BP loads (percentage of readings above the ambulatory 95th percentile), and percentage dipping. Ambulatory hypertension was diagnosed when the average ambulatory systolic or diastolic BP was ≥95th percentile for height and sex as per the normative values for ABPM (10). Dipper was classified as having a decrease in average systolic and diastolic BP ≥ 10% during sleep and non-dippers as <10% dipping during sleep (9). White coat hypertension is defined as office BP in the >95th percentile and normal ABPM, while masked hypertension is defined as normal office BP with ambulatory hypertension.

This study protocol was approved by the Institutional Human Ethics Committee (IHEC) of the institute (IHEC-LOP/2015/IM0080). All children diagnosed as having hypertension were managed as per standard treatment protocols. Nutrition, physical activity, and other lifestyle modifications for obese children were also provided as per standard protocol. 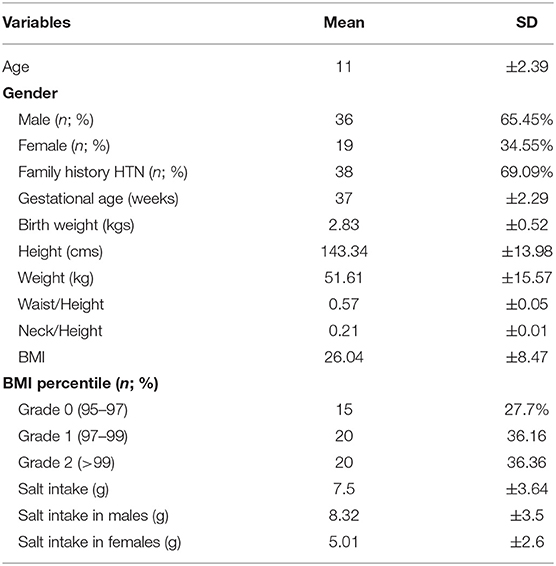 Table 1. Distribution of study population by general factors which may be associated with obesity (n = 55). 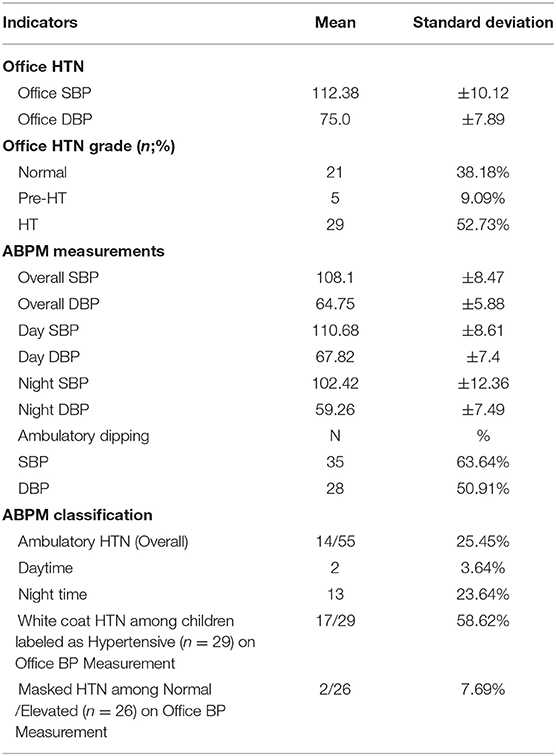 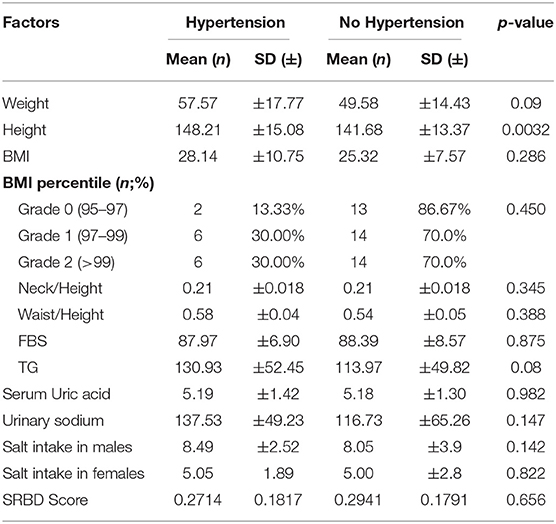 Table 3. Distribution of variables by stratified by presence of hypertension. 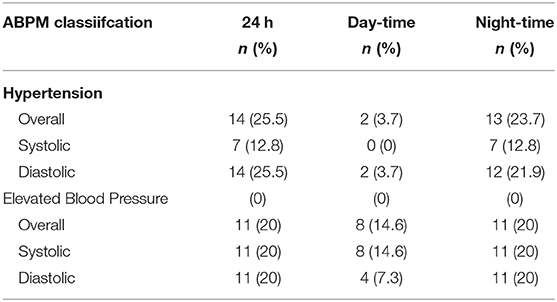 We also calculated the office blood pressure which will predict ambulatory hypertension in obese children as per the recent AAP nomograms. For office SBP percentile the area under curve (AUC) was 0.773 (95% CI: 0.619–0.926, p = 0.005) and for office DBP percentile, the AUC was 0.802 (95% CI: 0.638–0.966, p = 0.002) (Figure 2). The optimal cut offs for office blood pressure which predicts ambulatory hypertension in obese children were in the 93rd percentile for systolic BP (sensitivity-67% and specificity−78%) and the 88th percentile for diastolic BP (sensitivity−83% and specificity−62%). However, these cut-offs are lower than those used for the definition of hypertension based on readings taken in clinic or office and still have lower sensitivity and specificity, thereby indicating the indispensability of ABPM for the diagnosis of hypertension in children. We assessed various cut-offs of office blood pressure to identify children who have to undergo ABPM for diagnosis of hypertension. Figure 3 shows that, office SBP > the 85th percentile or DBP > the 85th percentile can be used as cut-off for the decision of doing ABPM which will not miss children with ambulatory hypertension. 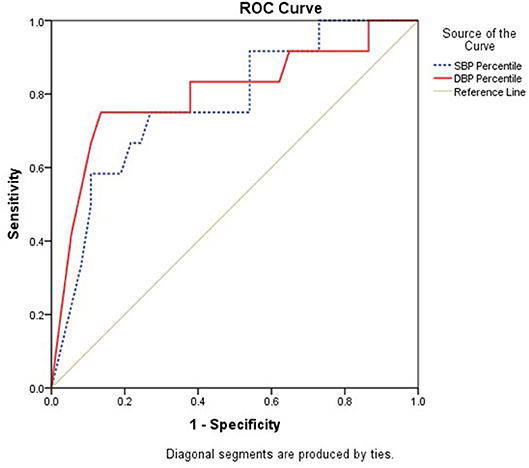 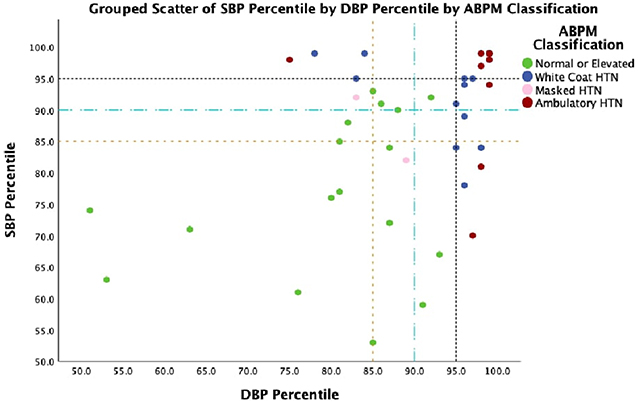 The present study shows a high prevalence of ambulatory hypertension in obese Indian children (25.45%) with a high percentage of children having impaired dipping status. In the present study, the presence of masked hypertension and white coat hypertension is found to be 7.69 and 58.62% respectively, using the newer AAP nomograms for office blood pressure monitoring. Our estimated cut-offs to predict ambulatory hypertension are lower than the existing definition of hypertension based on office reading and do not have optimal diagnostic test properties, thus emphasizing the role of ABPM for diagnosis of hypertension in obese children. A recent study assessing the impact of 2017 blood pressure guidelines by AAP in overweight/obese youth found a 13% increase in the prevalence of high blood pressure as compared to European Society of Hypertension Guidelines 2016 (12, 13). Another study comparing AAP 2019 normative tables and fourth report found a 12% increase in the prevalence of children with blood pressure in at least the 90th percentile was observed by using the new nomogram without yielding any added advantage in identifying individuals with early cardiac organ damage (13).

The American Academy of Pediatrics 2017 guidelines emphasized on evaluation for white coat hypertension before diagnosing hypertension, as the observed frequency of WCH is high in pediatric studies (14, 15). The prevalence of WCH in our study was more than 58%, implying that these children would have been subjected to unnecessary tests and inappropriate treatment in the absence of ambulatory blood pressure monitoring. The present evidence regarding the underlying mechanism and long term consequences of WCH on cardiovascular health in children remains unclear (14, 16).

After publications of newer AAP nomograms, only a few studies were conducted to predict ambulatory hypertension based on office blood pressure in adolescents. Hamdani et al. evaluated ambulatory blood pressure monitoring in 247 adolescents and found that clinic systolic in the 85th percentile may be the optimal threshold at which ambulatory BP monitoring should be performed (21). The authors also concluded that 2017 clinical practice guidelines have a higher sensitivity for ambulatory hypertension detection when compared with fourth report percentiles.

The major strengths of the present study are: (1) This study demonstrates feasibility and significance of performing ABPM among obese children. (2) This study also suggests that by using AAP 2017 clinical practice guidelines, a higher number of obese patients are diagnosed with hypertension.

The study is not without limitations, with some major limitations being: (1) The clinical BP was measured by an auscultatory method and ambulatory blood pressure was measured by an oscillatory method, which are not correlated and have restricted reproducibility (21, 22); (2) a formal sample size calculation was not done and convenient sample size based on hospital visits over a duration of 2 years was used. A small sample size in the study was another limitation. (3) Since this study was conducted on children with obesity, the model can't be generalized to children without obesity and lastly, currently used German nomograms are derived from a homogenous Caucasian European population, which is likely not generalizable to children of different races worldwide.

Due to ethical restrictions imposed by the author's Ethics committee, it is not possible to deposit data to a public repository. Interested researchers are kindly asked to send appropriate requests to the corresponding author Girish C. Bhatt, drgcbhatt@gmail.com.

The studies involving human participants were reviewed and approved by All India Institute of Medical Sciences, Bhopal. Written informed consent to participate in this study was provided by the participants' legal guardian/next of kin.

GB conceptualized and wrote the manuscript. PG, SJ, SG, NG, and RM helped in carrying out the research work and reviewed the manuscript for critical inputs. AP and GB developed the protocol and carried out statistical analysis. All authors read and approved the final version of the manuscript.

Part of this study was carried out as an Indian council of Medical Research (ICMR) short term studentship (STS) ID 2016-01459.

We would like to thank Mr. Bhagwan Singh Meena and Mr. Rajendra for helping in the anthropometry of registered patients in pediatric OPD. We are thankful to the parents and children for participating in the study.

Copyright © 2020 Bhatt, Pakhare, Gogia, Jain, Gupta, Goel and Malik. This is an open-access article distributed under the terms of the Creative Commons Attribution License (CC BY). The use, distribution or reproduction in other forums is permitted, provided the original author(s) and the copyright owner(s) are credited and that the original publication in this journal is cited, in accordance with accepted academic practice. No use, distribution or reproduction is permitted which does not comply with these terms.