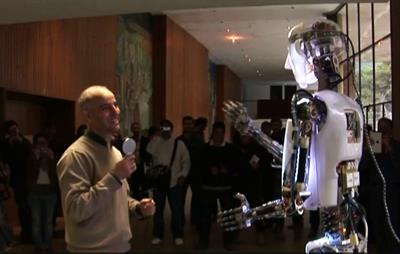 Immersive Journalism: Virtual Reality in the Presentation of News


Description: Research on humanoid robotics is attacking problems such as human-robot interaction, whole body control, object manipulation and tool use. These research efforts must be supported by an adequate software infrastructure which allows experimenting with new hardware and algorithms while at the same time reducing debugging time and maximizing code-reuse. The complexity of humanoid robots and their peculiar application domain require that further software engineering efforts are devoted to support the proper integration of diverse capabilities.

Congratulations to our authors, reviewers and editors across all Frontiers journals – for accelerating new knowledge and solutions, and helping everyone to live great lives on a healthy planet.

Virtual Environments is a first-tier electronic specialty that aims to publish major work in the general field of virtual environments. This includes but is not limited to immersive virtual reality, augmented reality, mixed reality, projection based display systems such as Caves and domes, advances in digital holography, and VE software and platforms.
A VE system dynamically substitutes or augments real world sensory data by digitally generated data. Hence it includes all of the sensory streams – visual, auditory, haptic, olfactory, stimulation of thermal receptors, and of course integrated multisensory data streams. The specialty of Virtual Environments welcomes articles in the domains of technological advances, display and tracking algorithms, interaction paradigms, experimental studies with participants, novel applications, and associated ethical issues.

The extensive deployment of immersive virtual environments in many aspects of society that was predicted as imminent in the early 1990s is only now becoming a strong likelihood. Today's wide field-of-view head-mounted displays, whole body tracking systems and depth cameras, can be purchased at a fraction of the cost of devices with equivalent functionality in the recent past. How should games be designed, for example, taking into account that now your virtual representation and the characters with whom you interact are not tiny figures on a screen but are life-sized, in 3D stereo, sharing the space in which you are apparently located; that you move and perceive not by using your fingers on a joystick but with your whole body? What kind of interaction paradigms work best in these environments? These questions are not new but have been tackled by researchers since the early 1990s. Such studies have been typically limited to a few dozen participants. However, now perhaps millions will be using these paradigms, thereby generating masses of online data about usage. We welcome articles that reflect the fact that times are changing, where the boundaries between ‘virtual’ and ‘real’ become increasingly blurred.

Our ultimate goal is to accelerate the progress of research at this time when this field is facing the challenge of becoming implicated in mass products, and also being increasingly used in the psychological and cognitive sciences.

Authors submitting manuscripts other than Original Research should highlight in their cover letter how their publication record on the same topic has prepared them for contributing to the field. We also request that prospective organizers of Research Topics provide the Editorial Office with their CV and clarify in the proposal how their research expertise qualifies them to organize a Research Topic on that particular subject.

For all queries regarding manuscripts in Review and potential conflicts of interest, please contact computerscience.editorial.office@frontiersin.org