The gamma distribution is the most common probability distribution function used for this purpose. It has two parameters, shape and scale, and broadly reflects the shape of the axon diameter distribution, which has been consistently observed to be right-skewed and heavy-tailed (i.e., an asymmetric distribution, in which the right tail of the distribution is much longer than the left tail). Recently Pajevic and Basser (2013) argued, from neurophysiological perspective, that this skewed profile optimizes information transfer and capacity along bundles of axons. They also reported optimum distributions, based on parameters describing the fiber's ability to transmit information, that outperform the gamma distribution, in practical applications such as AxCaliber (Assaf et al., 2008).

Here we introduce another probability distribution function that provides a good representation of the heavy-tailed axon diameter distribution, the generalized extreme value distribution. We empirically compared the generalized extreme value distribution with the gamma distribution and fourteen others, without any prior assumptions with respect to the anatomy or metabolic requirements of axons. We assessed different probability functions using electron microscopy images of mouse corpus callosum in which we manually measured more than 20,000 axons. In addition, we examined previously published electron microscopy data for the human and macaque corpus callosum (Liewald et al., 2014).

Figure 1. An example electron microscopy image of mouse corpus callosum. On the right panel the circular representation of the measured axons is presented. 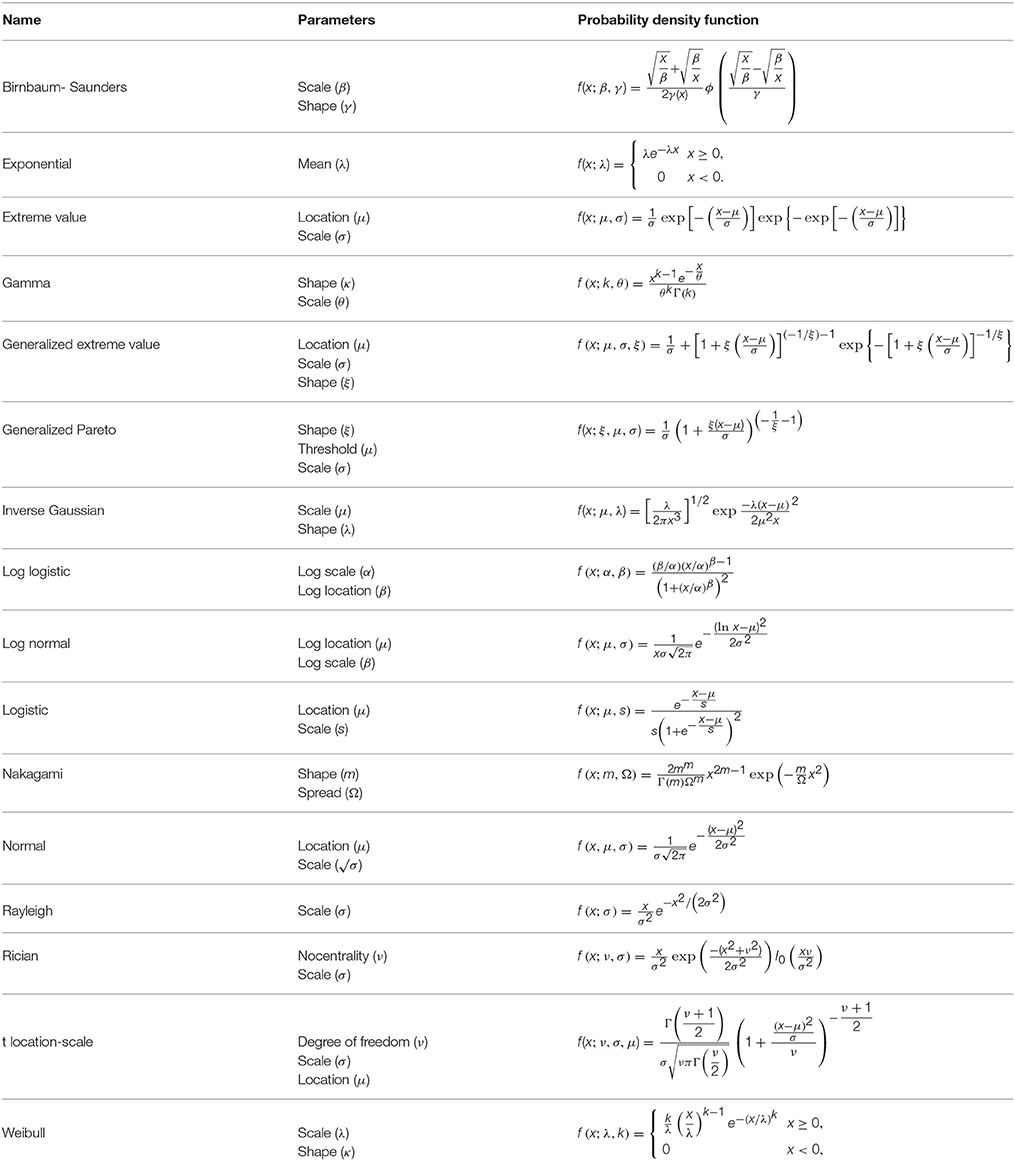 To evaluate the performance of the distribution functions, the Akaike Information Criterion (AIC) was used (Akaike, 1974); it trades off goodness of fit against model complexity. AIC measures the relative quality of a statistical model, in which the model with the lowest AIC score is ranked highest. The AIC was corrected for finite sample sizes and was calculated as follows:

where L and k are the maximum value of the likelihood function and the number of estimated parameters, respectively. In addition to AIC, the Bayesian Information Criterion (BIC) amd negative log-likelihood values were also assessed. However, we only report the AIC, as all criteria used led to same rankings of tested distributions. 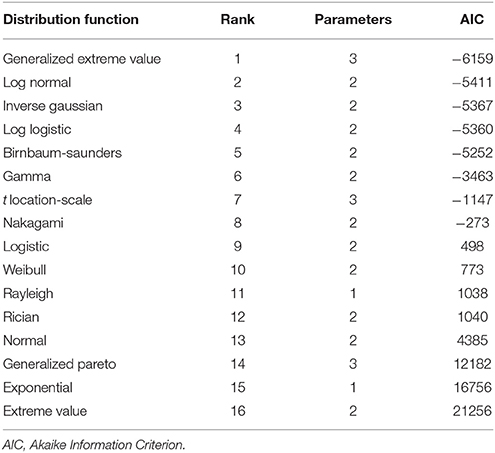 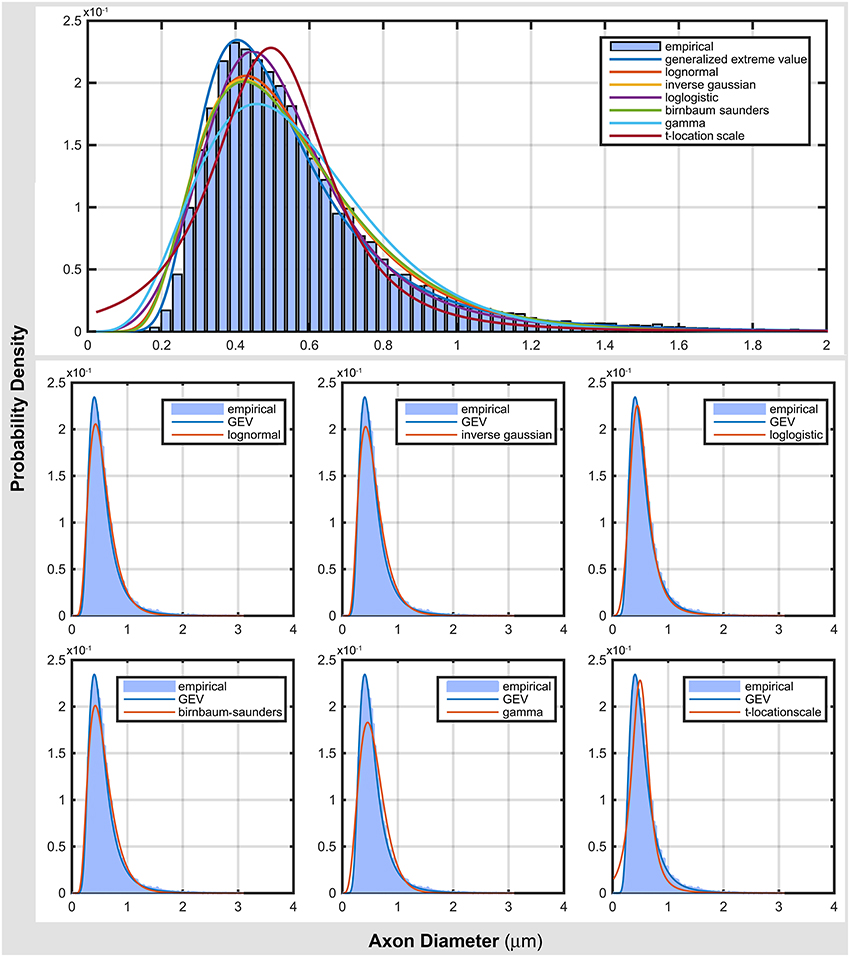 Figure 3 demonstrates the cumulative distribution of top five distribution functions, together with their error. The error plot (Figure 3B) shows that generalized extreme value function had relatively constant errors across axon diameter values. The remaining distributions showed two error peaks, one before and one after the mode. gamma and t-location-scale distributions had the highest negative and positive error values. 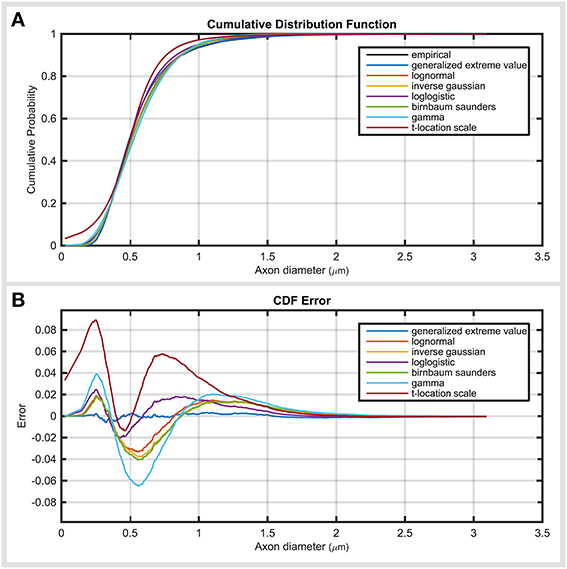 Sub-Regions of the Corpus Callosum 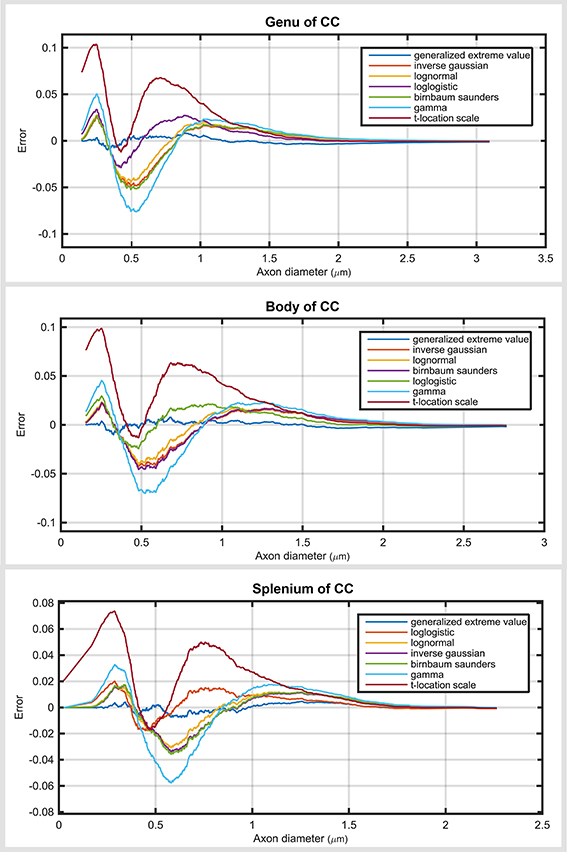 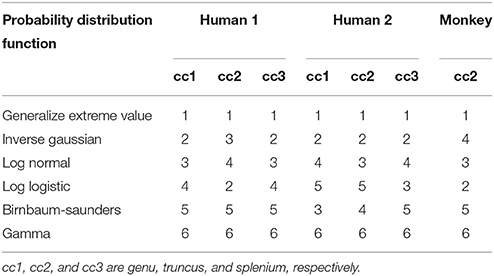 Unlike previous studies (Gov, 2009; Perge et al., 2012; Pajevic and Basser, 2013), we did not explicitly focus on explaining the skewness of the axon diameter distribution. Rather, we evaluated a range of parametric probability distribution functions to find the most parsimonious model in terms of unknown parameters that optimized model accuracy. Model selection did not consider prior knowledge about axon morphometry.

As discussed in (Sepehrband et al., 2016), our estimated values are higher than those reported in a previous study (median of 0.25 μm and mean of 0.43 μm) (Innocenti et al., 1995). The difference could be due to the shrinkage artifact caused by older techniques for embedding and fixation of the tissue. We used a method that, in some settings, has been demonstrated to produce almost no shrinkage during processing compared to 40–70% shrinkage with other techniques (Hanssen et al., 2013).

We would like to thank Gayeshika Leanage from Centre for Advanced Imaging of UQ, and Dr. Kathryn Green from Centre for Microscopy and Microanalysis of UQ, for their valuable input, and help during animal preparation and histological imaging.

The Supplementary Material for this article can be found online at: https://www.frontiersin.org/article/10.3389/fnana.2016.00059

All procedures were performed with the approval of The University of Queensland Animal Ethics Committee, under the guidelines of the National Health and Medical Research Council of Australia. One 8-week-old male C57Bl/6J mouse was reared and housed at the Queensland Brain Institute animal facility, The University of Queensland. The animal was housed on a 12 h light/dark cycle and free access to food and water were provided.

We scanned a mouse brain, as mouse models of neurological diseases are commonly used due to the availability of relevant mouse mutants and of gene targeting technology (Sillitoe et al., 2012). The adult mouse was anesthetised with an intraperitoneal injection of approximately 8–9 mg/mL sodium pentobarbitone (Lethabarb™; Virbac, AU) and then transcardially perfused with 0.9% saline solution (0.9% w/v NaCl in MilliQ™ (Millipore, AU) water) for 5 min followed by 4% PFA (4% w/v paraformaldehyde; ProSciTech, AU) with 0.2% Magnevist® (1 mM gadopentetate dimeglumine, Bayer) in PBS (phosphate-buffered saline, 137mM NaCl; 10mM Na2HPO4; 1.8mM KH2PO4; 2.7mM KCl; pH 7.4) for 10 min. The steps for fixation and storage are similar to Dyrby et al. (2011), previously optimized for diffusion-weighted MRI studies. The brain was post-fixed in 4% PFA with 0.2% Magnevist® in PBS and stored at 4°C. The brain was then incubated in PBS and 0.2% Magnevist for 4 days prior to MRI to remove the PFA prior to MRI. A Magnevist concentration of 0.2% and incubation for 4 days were found to be optimal for obtaining good SNR and contrast for ex vivo brain imaging (Huang et al., 2009). A high concentration of Magnevist can influence estimation of extra-axonal water diffusivity (D'Arceuil et al., 2007) and fraction but at the concentration used in this study, Magnevist does not affect the diffusion properties such as apparent diffusion coefficient and fractional anisotropy (D'Arceuil et al., 2007). The calculated water: Magnevist ratio in the white matter is around 1/5500 with a very short interaction of 1 ns between two molecules and radius of separation between the two molecules being 0.1–1 nm (Micskei et al., 1993; Sherry et al., 2009).

The brain was sectioned sagittally at 50 μm thickness using a vibratome after the imaging. The sections were placed in 12 well-plates containing PBS with sodium azide and stored at 4°C. A mid-sagittal section was selected. EM imaging was then performed on sub-sections of the corpus callosum.

On the mid-sagittal section, the corpus callosum was isolated and samples of the genu, body, and splenium were separated. Sample preparation was carried out according to the methods of Wilke et al. (2013). After polymerization of the resin blocks, sections were cut on a UC6 ultra-microtome (ultracut S, Reichert, Leica, Sweden) at 60 nm, and imaged at x5000 in a transmission electron microscope at 80 kV (JEM 1011, Jeol, Japan) at the Centre for Microscopy and Microanalysis of The University of Queensland. Images were captured with an Olympus Morada digital camera.

Estimation of axon diameters from EM was performed in MATLAB® software, version R2013a (Mathworks, Natick, MA). Each axon was manually selected by drawing a circle on its transverse section (20,128 axons were segmented). Basic statistics of the axon diameters were then calculated. One-way Analysis of Variance (ANOVA) with Tukey-Kramer post-hoc correction was performed to evaluate mean differences across sub-regions of the corpus callosum. P < 0.01 was taken to be statistically significant.

Copyright © 2016 Sepehrband, Alexander, Clark, Kurniawan, Yang and Reutens. This is an open-access article distributed under the terms of the Creative Commons Attribution License (CC BY). The use, distribution or reproduction in other forums is permitted, provided the original author(s) or licensor are credited and that the original publication in this journal is cited, in accordance with accepted academic practice. No use, distribution or reproduction is permitted which does not comply with these terms.