The lower stations of the auditory system display a complex anatomy. The inner ear labyrinth is composed of several interconnecting membranous structures encased in cavities of the temporal bone, and the cerebellopontine angle contains fragile structures such as meningeal folds, the choroid plexus (CP), and highly variable vascular formations. For this reason, most histological studies of the auditory system have either focused on the inner ear or the CNS by physically detaching the temporal bone from the brainstem. However, several studies of neuroimmune interactions have pinpointed the importance of structures such as meninges and CP; in the auditory system, an immune function has also been suggested for inner ear structures such as the endolymphatic duct (ED) and sac. All these structures are thin, fragile, and have complex 3D shapes. In order to study the immune cell populations located on these structures and their relevance to the inner ear and auditory brainstem in health and disease, we obtained a clarified-decalcified preparation of the rat hindbrain still attached to the intact temporal bone. This preparation may be immunolabeled using a clearing protocol (based on iDISCO+) to show location and functional state of immune cells. The observed macrophage distribution suggests the presence of CP-mediated communication pathways between the inner ear and the cochlear nuclei.

The role of inflammation is increasingly recognized in cochlear damage (Kalinec et al., 2017) and central auditory responses (Fuentes-Santamaría et al., 2017). Therefore, the immune system is being targeted to get novel insights in the onset, progression, and variability of auditory disorders. Both the ear (Fujioka et al., 2014) and brain (Louveau et al., 2017) have undergone a paradigm shift from the idea of an “immune-privileged” organ (with barriers) to that of a tightly regulated neuroimmune communication network with defined points of entry and exit (Louveau et al., 2017). However, the involvement of neuroimmune barriers, and in particular the choroid plexus (CP), which has been clearly established in the brain (Marques et al., 2017) has been so far largely neglected in the frame of the auditory system, mainly for lack of methods to study them in situ.

The auditory brainstem and periphery are anatomically very complex (the inner ear is appropriately called a “labyrinth”). Moreover, the anatomy of cerebellopontine angle blood vessels (Kim et al., 1990) and CP (Tubbs et al., 2016) displays high interindividual variability. In situ imaging techniques such as CT or MRI allow morphological study of the system, but not characterization of cell populations. On the other hand, removing the brain from the temporal bone rips apart brainstem meninges and often distorts the lateral part of CP upon paraflocculus dislodgement from the bony recess. Both these problems are solved by employing a cleared preparation of the intact auditory system which allows in situ labeling and imaging of cell populations without physical sectioning.

Several clearing protocols allowing to image through bone have been established in mouse (Susaki and Ueda, 2016), where the whole cleared body may be labeled and imaged. Clearing rat brains has been proven more difficult but possible (Stefaniuk et al., 2016). Here, we have adapted the iDISCO+ clearing method (Renier et al., 2016) in order to clarify hindbrain and temporal bone of adult rats, and we used this preparation to characterize the neuroimmune structures surrounding the rat auditory brainstem.

Experiments were performed on inbred Wistar rats average age: [49 ± 17 days (mean ± S.D.; n = 6)]. Animals were housed with 12 h/12 h light/dark cycle, food and water provided ad libitum. Experiments were performed during the light phase. This study was carried out in accordance with the recommendations of Act 26/2014, Italian Ministry of Health. The protocol (number 155/2017-PR) was approved by the Italian Ministry of Health and University of Pavia Animal Welfare Office (OPBA). All efforts were made to minimize number of animals used and animal suffering.

For all experiments except blood vessel tracing, animals were anesthetized with diethyl ether until complete areflexia and transcardially perfused with heparinized Krebs solution until complete blood clearance, followed by 4% PFA in PBS. For blood vessel tracing, animals were anesthetized and decapitated without transcardiac perfusion; the brain was rapidly dissected out (3–6 min from decapitation to fixation) and immersed in 4% PFA. All samples were postfixed overnight in 4% PFA and then cryoprotected in 30% sucrose solution until sinking. 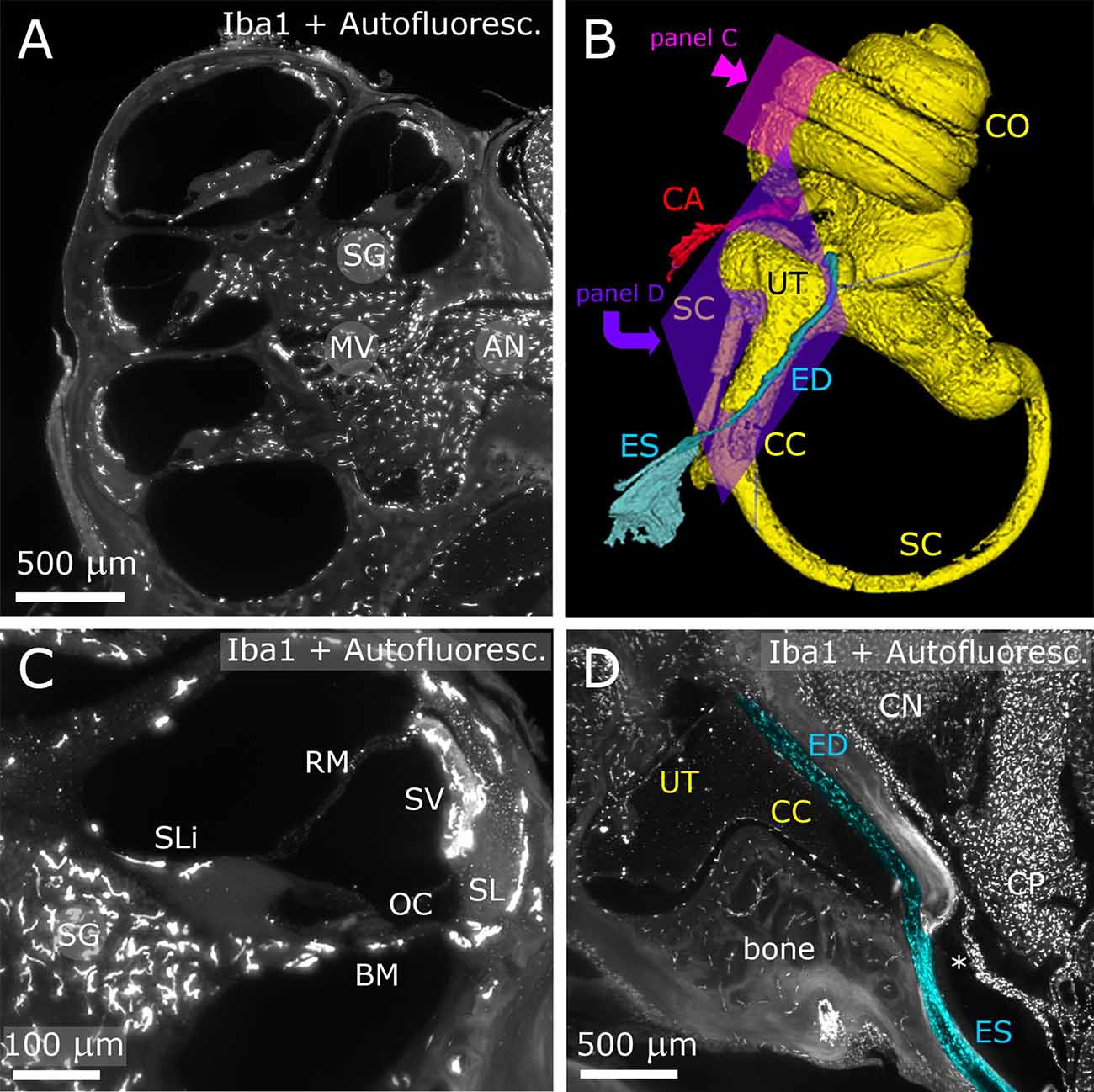 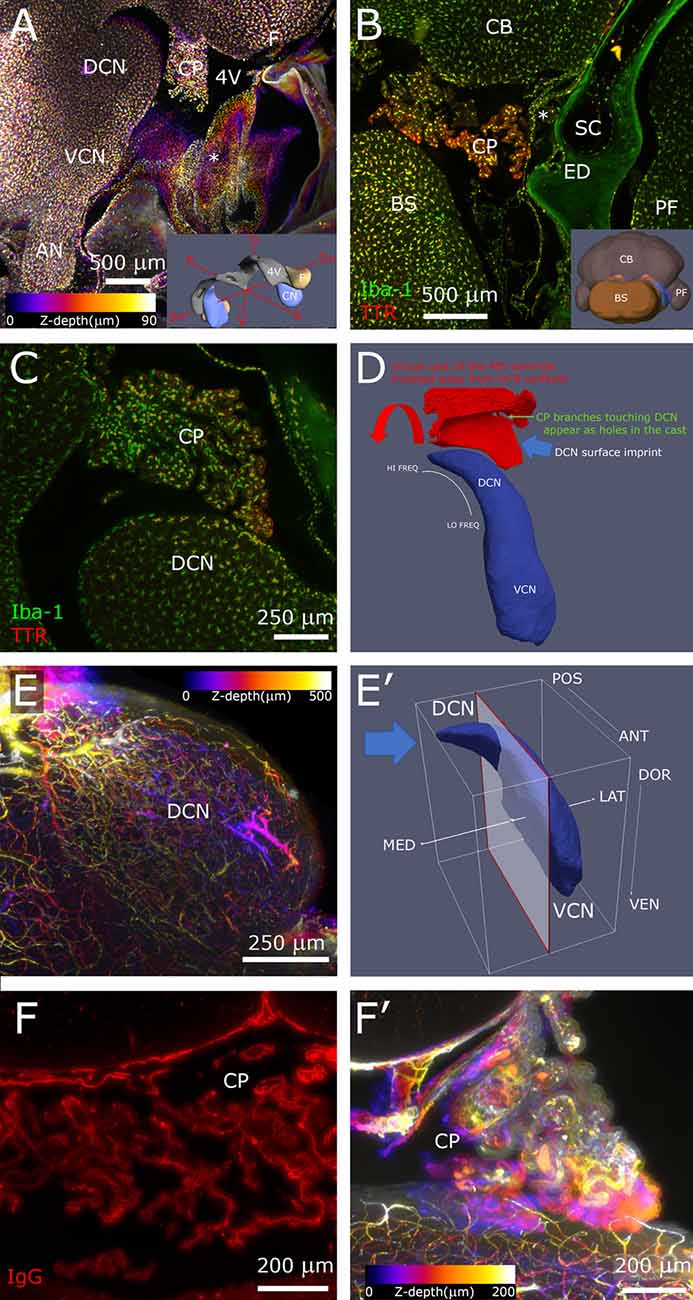 In the brainstem, the meningeal fold surrounding the foramen of Luschka was clearly delineated (Figure 2A), and marked the passage from the 4th ventricle to subarachnoid space. Similarly, the dural fold covering the ED and sac was visible in association to the temporal bone (Figures 1D, 2B). Microglia and macrophages (Figures 2A–C) were clearly labeled throughout the sample. IgG labeling allowed vessel reconstruction throughout the whole DCN (Figures 2E,E′), and in all brain parenchyma. In the CP, however, the stroma was labeled (Figures 2F,F′), consistent with the presence of fenestrated endothelium permeable to macromolecules (Strazielle and Ghersi-Egea, 2013).

The CP was attached to the dorsal side of the 4th ventricle (Figure 2A) and filled the lateral ventricular expansion around the DCN (Figure 2B) in all rats observed (n = 6). Occasionally, a branch from the CP formed a “foot” structure, connected to the CP body through a thin stalk, that reached DCN surface and appeared to touch it (Figure 2C). Points of contact could be counted by automated segmentation of the ventricle volume surrounding DCN, where they appeared as holes (Figure 2D). The number of contacts was quite variable (from 0 to 13, n = 4), and the distribution was not tonotopic. Macrophages were observed in CP “feet”; colocalization with TTR, which labels CP epithelium, showed their localization in the stroma rather than on the CSF side (Figure 2C).

By combining decalcification and iDISCO+ clearing, we have obtained a rat preparation that allows visualization of cell populations in the auditory system from the cochlea to the brainstem while keeping all surrounding immune structures in situ. After observation of the macrophage populations in the auditory brainstem and periphery, three points are especially worth focusing on, all involving the microanatomy of neuroimmune gates.

First, the CP forms (seemingly random) close contacts with the DCN, where the plexus epithelium and the DCN surface appear to touch. This association is likely conserved from rat to human, since sporadic CP-DCN associations have been observed in autoptic human samples (Terr and Edgerton, 1985), and elucidating interactions in rodents may therefore yield new strategies for treating human hearing disorders. This is particularly interesting given that in the rat, upon cochlear ablation, the DCN displays an acute neuroinflammatory reaction mainly in its surface facing the ventricle (Perin et al., 2017), rather than in its deep layer receiving cochlear nerve fibers (Trussell and Oertel, 2017), and that CP trafficking of macrophages is observed after stroke (Ge et al., 2017) and spinal cord injury (Shechter et al., 2013).

Second, the CP also reaches the dural fold covering the ED and sac (which drains the inner ear endolymph into a dural sinus). Given that the dura is permeable to several inflammatory factors (Zhao et al., 2017), the observed configuration could play a role in the still largely unexplored relations between inner ear fluids and CP (Salt and Hirose, 2018). Perilymphatic spaces of the ear, on the other hand, are continuous with CSF spaces (Salt and Hirose, 2018), but so far their relations to meninges and CP have not been studied.

Finally, the cerebellopontine angle represents a unique brain region where CP and meninges are in close contact: all other ventricles are closed within the brain parenchyma, and other CPs only contact the ventricular surface. Given that the immune populations of meninges and CP differ in both roles and ontogeny (Prinz et al., 2017), and that CSF is regionally heterogeneous and involved in modulating neural responses (Veening and Barendregt, 2010) it appears highly likely that contacts between these two structures are regulated. The cleared preparation we have developed allows visualization of cell populations in this special neuroimmune assembly in several pathophysiological conditions.

PP and RP contributed the biological idea and analyzed the images. PP performed the experiments and wrote the article. FV, PB and FH performed the lightsheet scans.

The Supplementary Material for this article can be found online at: https://www.frontiersin.org/articles/10.3389/fnana.2019.00015/full#supplementary-material

Copyright © 2019 Perin, Voigt, Bethge, Helmchen and Pizzala. This is an open-access article distributed under the terms of the Creative Commons Attribution License (CC BY). The use, distribution or reproduction in other forums is permitted, provided the original author(s) and the copyright owner(s) are credited and that the original publication in this journal is cited, in accordance with accepted academic practice. No use, distribution or reproduction is permitted which does not comply with these terms.