Many models suggest that time perception is mediated by a unitary mechanism. For example, scalar expectancy theory (SET), the dominant model of timing for the past 30 years, suggests that temporal processing is mediated by a centralized clock-counter module in which elapsed time is measured by the summation of pacemaker pulses (Gibbon et al., 1984). A number of alternative, neurally plausible models have been proposed with clock processes that incorporate either the pacemaker-counter elements of SET, or other neural dynamics such as decay processes or state-dependent network activity (Staddon and Higa, 1999; Karmarkar and Buonomano, 2007; Simen et al., 2011a,b). While these models differ in the mechanisms utilized for the temporal control of behavior, they all suggest that timing is accomplished by a single, amodal process. Support for the hypothesis that timing is mediated by a single mechanism comes from several sources. A number of studies demonstrate that performance is independent of whether the task utilizes motor or “perceptual” temporal representations (Ivry and Hazeltine, 1995; Meegan et al., 2000). Additionally, although an effect of interval duration has been postulated for over a hundred years, such an effect has not been consistently identified; Lewis and Miall (2009), for example, failed to identify a fundamental change in timing performance or “break-point” using stimuli ranging from 68 ms to 16.7 min.

We suggest the alternative hypothesis that timing functions are mediated by multiple, overlapping neural systems, which may be flexibly engaged depending on the task requirements. These systems may function independently of one another and may be adaptively engaged pro re nata, such that single or multiple systems may be active during any one timing task, depending on environmental conditions and behavioral requirements. One line of support for this hypothesis comes from a quantitative meta-analysis of 41 neuroimaging studies of time perception in which we found that different neural structures were engaged depending on stimulus duration and the “motor” or “perceptual” nature of the task (Wiener et al., 2010a). Of particular interest in this context, however, is the fact that the meta-analysis also demonstrated two areas engaged across all tasks: supplementary motor area (SMA) and right inferior frontal gyrus (rIFG). In subsequent analyses of this dataset, however, we found that even in regions active across several conditions there is evidence of multiple timing mechanisms at work. Consider the SMA for example. Recent observations suggest that the SMA is a heterogeneous structure that may be functionally divided into the SMA “proper” and pre-SMA (Nachev et al., 2008). A rostro-caudal gradient in the SMA has been proposed according to which SMA and pre-SMA subserve motor and cognitive processes, respectively. Consistent with this finding, we found evidence for a functional gradient in the SMA, wherein perceptual timing tasks are more likely to activate voxels within the pre-SMA while motor timing tasks are associated with SMA proper activation-likelihood (Figure 1A). 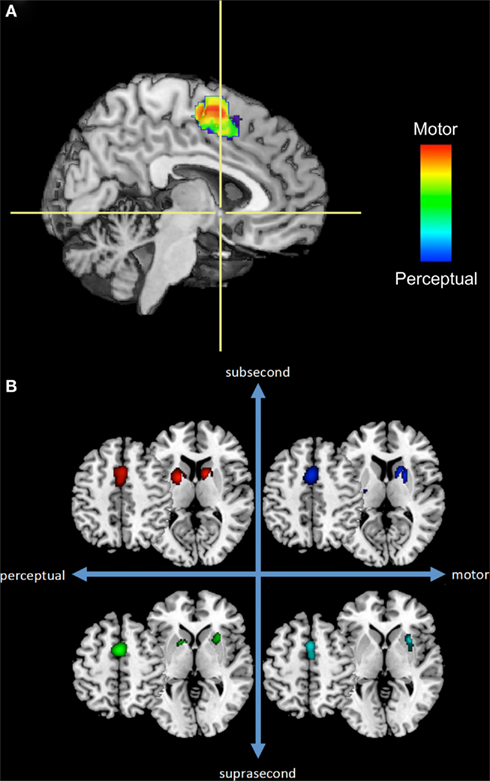 Figure 1. A subset of the results from our previous meta-analysis of neuroimaging timing studies. (A) Sagittal section of a rendered brain including SMA voxels from perceptual or motor timing tasks (regardless of duration length) and their overlap. Crosshairs are located at the anterior commissure with the vertical axis dividing the SMA and pre-SMA. (B) Separate ALE results for SMA and basal ganglia regions across four temporal contexts.

Fractionation of temporal processing may also be evident in the basal ganglia, a brain region often implicated in studies of time perception and with high connectivity to the SMA. Figure 1B depicts voxels from SMA and basal ganglia regions with significant activation-likelihood. Once again, different patterns of activation-likelihood were noted as a function of the duration of the stimulus and nature of the task. For example, there was a greater propensity for the basal ganglia to be activated during sub-second timing tasks. However, it is crucial to note that the basal ganglia interact with numerous other regions, and so these activation patterns must be considered in the larger context of interactive networks.

Additional work beyond neuroimaging also argues for multiple timing systems. For example, we recently adopted a behavioral genetics paradigm to look at single-nucleotide polymorphisms in genes associated with different aspects of the dopamine system (Wiener et al., 2011). We found that a polymorphism affecting the expression of striatal D2 receptors was associated with poorer performance on a perceptual timing task, but only when the intervals tested were below 1 s. In contrast, subjects with a polymorphism affecting the expression of the enzyme catechol-O-methyltransferase (COMT), which is known to regulate prefrontal dopamine tone, were impaired during supra-second, but not sub-second timing. This work suggests that different dopaminergic systems may underlie distinct timing procedures.

Another line of data supporting the claim that multiple mechanisms mediate timing comes from the fact that at least under some circumstances timing mechanisms appear to be both modality-specific and mediated by local neural structures. For example, adaptation to focal regions of the visual field produces duration distortions that are localized to that spatial region (Burr et al., 2007). Interestingly, modality-specific regions appear to be invoked for temporal expectations even in the absence of the stimuli themselves (Bueti and Macaluso, 2010), suggesting that the process may be mediated by simulation.

The fact that subject strategies influence the neural circuits recruited for timing is also consistent with the hypothesis that multiple distinct procedures underlie timing. For example, a recent study demonstrated that subjects recruited different neural networks depending on whether they implicitly used a beat-based or duration-based strategy (Grahn and McAuley, 2009). Similarly, recordings from rodent striatum demonstrate that patterns of temporally varying neural activity may reflect an integration of the passage of time with its associated action (Portugal et al., 2011), further suggesting that the computations contributing to temporal control may critically depend on both environmental and behavioral context.

The above discussion is not intended to be exhaustive. Differences in performance on tasks assessing timing for synchronized or syncopated beat timing (Jantzen et al., 2004), as well as explicit or implicit timing to temporal intervals (Coull and Nobre, 2008; Wiener et al., 2010b) have also been identified. A challenge for future research will be to identify these different timing networks and to clarify the functional relationship between them.

The authors would like to acknowledge that this article contains the separate opinions of all three authors. At the recommendation of the editors, these opinions were combined into a single article.

Ivry, R. B., and Hazeltine, R. E. (1995). Perception and production of temporal intervals across a range of durations: evidence for a common timing mechanism. J. Exp. Psychol. Hum. Percept. Perform. 21, 3–18.

Copyright: © 2011 Wiener, Matell and Coslett. This is an open-access article subject to a non-exclusive license between the authors and Frontiers Media SA, which permits use, distribution and reproduction in other forums, provided the original authors and source are credited and other Frontiers conditions are complied with.