Foundation for Research and Technology Hellas (FORTH), Greece

Mortality, Recurrence, and Dependency Rates Are Higher after Acute Ischemic Stroke in Elderly Patients with Diabetes Compared to Younger Patients

It is well known that diabetes is significantly associated with stroke, and patients with diabetes mellitus (DM) are at greater risk of stroke than individuals without diabetes (Brott et al., 1989; Recommendations on Stroke Prevention, Diagnosis, and Therapy, 1989; Ullberg et al., 2015). A few studies have investigated the association between DM and long-term prognosis of patients following acute ischemic stroke (AIS; Rankin, 1957; Mahoney and Barthel, 1965); however, the evidence for this association among elderly patients remains controversial. A report from China demonstrated that DM independently predicted poor outcomes within 6 months after AIS in Chinese patients (Wang et al., 2013). However, differences in long-term outcomes among elderly stroke patients with DM have not been established.

Therefore, in this study, we aimed to evaluate differences in long-term outcomes between younger patients (<75 years old) and elderly patients (≥75 years old) with diabetes following AIS from a hospital-based stroke registry in Tianjin, China.

All consecutive patients with AIS who were hospitalized in three stroke units in Tianjin, China between January 2006 and September 2014 were recruited for this study. Stroke was defined according to the World Health Organization’s criteria, and a diagnosis of AIS was confirmed in all patients based on neuroimaging evidence (Banks and Marotta, 2007). Those patients diagnosed with transient ischemic attack were excluded. DM was defined by a previous or new-onset physician diagnosis of DM, or use of hypoglycemic medications.

The ethics committee of Tianjin Medical University General Hospital approved the study, and patients or their next of kin provided written informed consent for participation in accordance with the Declaration of Helsinki.

According to the Trial of Org 10172 in Acute Stroke Treatment (TOAST) criteria, ischemic stroke subtypes were classified according to etiology as stroke due to large artery atherothrombosis (LAA), stroke due to cardioembolism (CE), stroke due to small artery occlusion (SAO), stroke of other determined etiology, and stroke of undetermined etiology (Murray and Lopez, 1997). Neurological deficits were assessed using the National Institutes of Health stroke scale (NIHSS; Marini et al., 2004), and the level of disability was measured using the Barthel index (BI; Gur et al., 2012) and modified Rankin scale (mRS; Olindo et al., 2003). Stroke severity was categorized into three groups based on the NIHSS score: mild (NIHSS: ≤7), moderate (NIHSS: 8–16), and severe (NIHSS: ≥17) (Deng et al., 2012).

Outcome measures for stroke were mortality, recurrence, and dependency rates 12 and 36 months after AIS. Death was defined as all-cause mortality at the corresponding time points after hospital admission. Stroke recurrence was defined as any new-onset vascular event, including stroke, myocardial infarction, and venous thrombosis, at least 30 days after stroke. Dependency was defined as an mRS score ≥3 (Fonarow et al., 2010). Mortality rates at 12 and 36 months after AIS were calculated as the number of all-cause deaths within 12 and 36 months divided by the total number of patients at the corresponding time points. The recurrence rate was calculated as the proportion of patients with new-onset vascular events, including patients who died of vascular events, during the follow-up period. The dependency rate was calculated as the number of patients with an mRS score ≥3 divided by the total number of stroke survivors at 12 and 36 months after AIS.

All patients were categorized into two groups by age: younger group (<75 years old) and elderly group (≥75 years old). All continuous variables, which included age, NIHSS, BI, mRS, and laboratory values (TC, TG, HDL-C, LDL-C, FG, and HbA1) are presented as the mean (standard deviation) or median (interquartile range, IQR) and compared between groups using the Student’s t-test or Mann–Whitney U test. All categorical variables, including ischemic stroke subtype, stroke severity, and stroke risk factors, are presented as the number (percentage); the differences between groups for categorical variables were analyzed using the Chi-squared test. A multivariate logistic regression analysis was performed to assess factors associated with stroke outcomes by adjusting for covariates (including stroke subtype, severity, and risk factors). The results of the multivariate analysis are presented as adjusted odds ratios (ORs) with 95% confidence intervals (CIs). All statistical analyses were performed using SPSS version 15.0 (SPSS Inc., Chicago, IL, USA), and P-values <0.05 resulting from two-tailed tests were considered statistically significant. 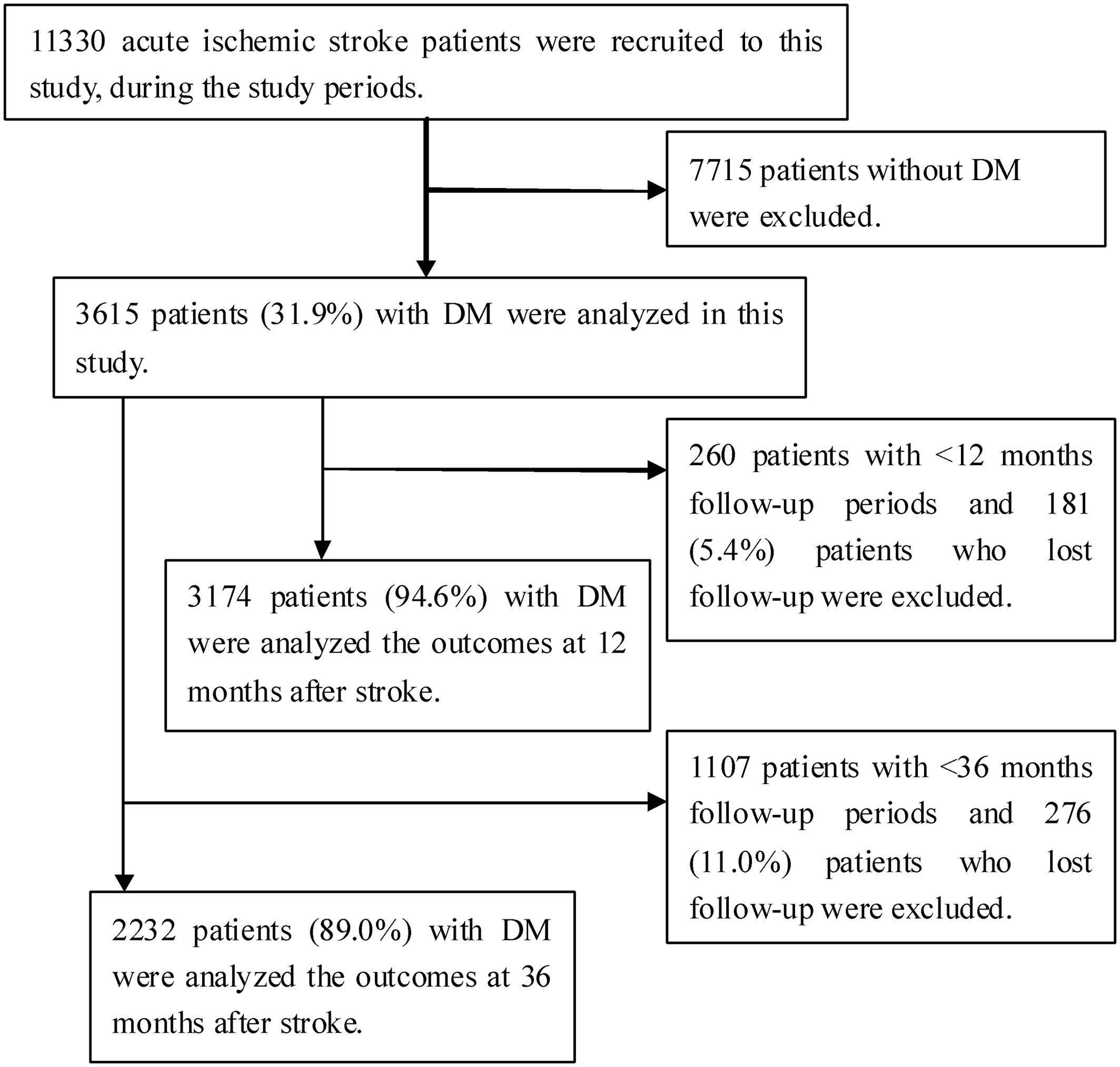 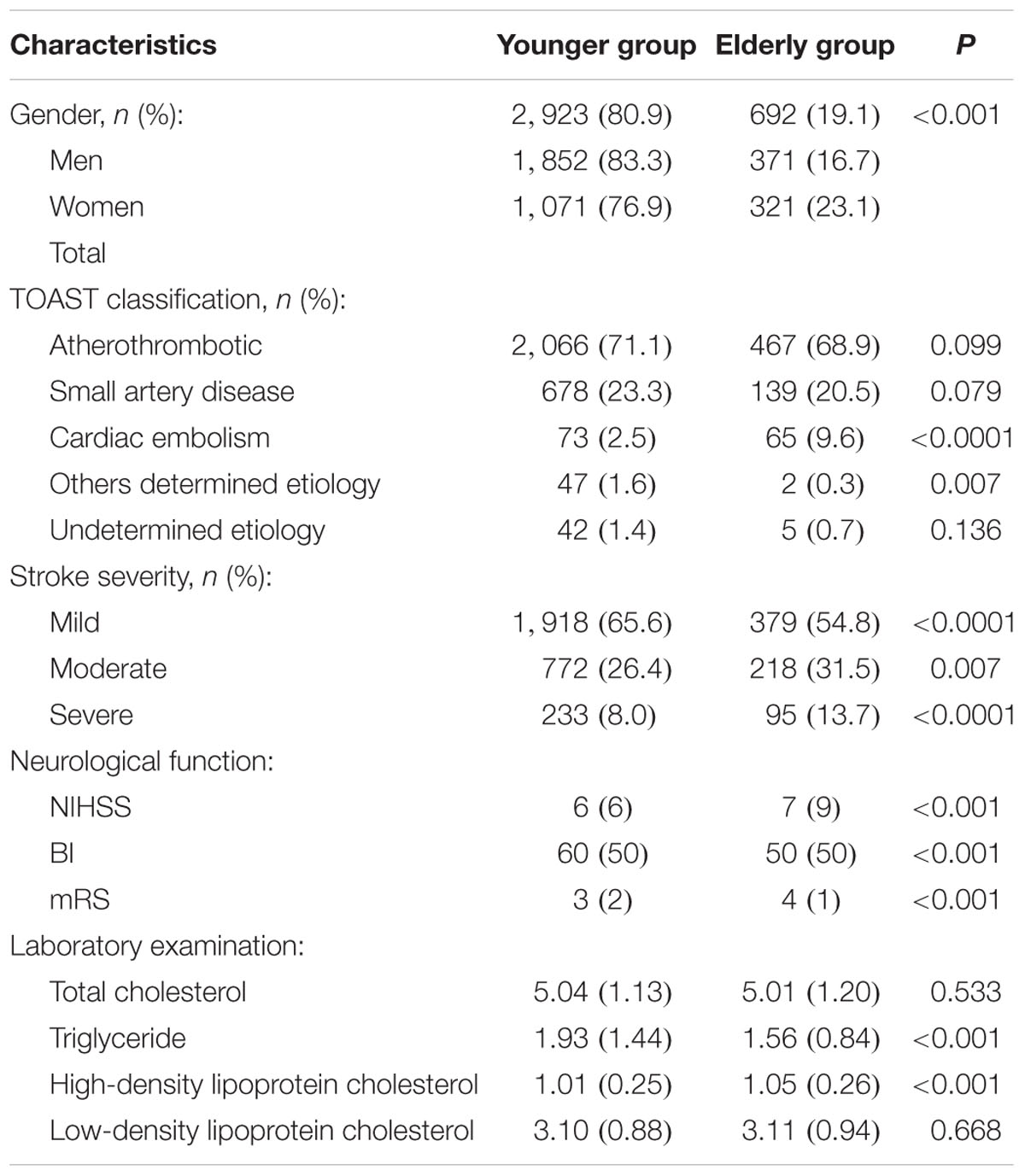 TABLE 1. Demographical and clinical characteristics in ischemic stroke patients with DM by age.

TABLE 2. The prevalence of risk factors in ischemic stroke patients with DM by age.

TABLE 3. The OR of mortality, recurrence, and dependency at 12 and 36 months after stroke among stroke patients with DM by age∗.

In this study, we assessed and compared the outcomes and associated risk factors at 12 and 36 months after AIS between younger patients (<75 years old) and elderly patients (≥75 years old) with DM in China.

Previous studies have indicated that ischemic stroke greatly affects the older population (Lovett et al., 2004; Rothwell et al., 2005; Lloyd-Jones et al., 2009; Feigin et al., 2014). Several studies have reported different trends in the prevalence of hypertension, DM, and AF (Olindo et al., 2003; Bhalla et al., 2004; Marini et al., 2004; Gur et al., 2012) among elderly individuals. A study based on a multicenter stroke registry in China reported that patients aged 80 years and older were more likely to have a stroke with a TOAST classification of CE (11.6%). Furthermore, there were higher rates of hypertension (72.1%) and AF (23.4%) and lower rates of DM (17.5%), dyslipidemia (5.6%), current smoking status (22.8%), and heavy drinking (2.5%) among AIS patients ≥80 years old compared to patients <80 years old (Deng et al., 2012). Consistent with these studies, in this study, elderly patients exhibited different clinical features and stroke risk factors than younger patients. The proportions of patients with a TOAST classification of CE, severe stroke, and AF were higher in the elderly group than in the younger group. Younger patients were more likely to have a previous history of hypertension and dyslipidemia and were more likely to be current smokers and alcohol consumers than elderly patients. However, there was no significant difference with respect to artery stenosis or obesity between the two groups.

Previous studies have demonstrated that older patients have worse outcomes after stroke than do younger patients (Lovett et al., 2004; Kimura et al., 2005; Palnum et al., 2008; Tu et al., 2010, 2011). A study conducted in China reported a mortality rate of 34.78%, a dependency rate of 43.81%, and a recurrence rate of 36.02% at 12-month follow-up among AIS patients ≥80 years old (Deng et al., 2012). Another study reported that the 1-year case-fatality rate and disability rate in patients ≥80 years old were 33.8 and 37.8%, respectively (Tu et al., 2011). Findings from a multivariate analysis in another study revealed that TOAST classification of CE and LAA and moderate and severe stroke were associated with mortality and recurrence 3 months after stroke; moderate and severe stroke also were associated with dependency 3 months after stroke. In addition, moderate and severe stroke were significantly associated with mortality and dependency at 12 months (Bereczki et al., 2009).

There are several limitations to this study. First, all patients were from the local hospital in Tianjin, China, resulting in a limited representation of the general population. Second, all patients were from the local university hospital or neurological specialty hospital, and accordingly, the proportion of patients with severe stroke was higher in this study than in previous studies. However, we adjusted the results by gender, stroke subtype, stroke severity, and risk factors in the multivariate analysis, thus addressing the effect of stroke severity on patient outcomes in our results. Third, pre-stroke information, including medication usage and complications such as pneumonia and urinary tract infection, were not analyzed in this study; therefore, we were unable to assess the impact of these factors on outcomes among elderly patients.

This is the first study to assess the long-term (12 and 36 months) outcomes following AIS between younger and elderly AIS patients with DM in China. Mortality, dependency, and recurrence rates were significantly higher in the elderly group than in the younger group at both 12 and 36 months after AIS. The relationship between age and outcomes remained even after adjusting for stroke subtypes, severity, and risk factors. Age was a predictor of poor long-term outcomes among stroke patients with DM, it was independent of the benefit from treatment using antidiabetic. Poor outcomes in elderly patients may be partly explained by the higher frequency of women, less frequent use of secondary measures to prevent stroke, and poor health care within the elderly population. Thus, management and secondary prevention should be emphasized in elderly patients with DM in China to reduce mortality, recurrence, and dependency after stroke.

BL, JW, and ZA made substantial contributions to the conception and design of the study. XL, TW, YL, HG, XG, YZ, and WZ made substantial contributions to the acquisition, analysis, and interpretation of data. XN and JW substantially contributed to the analysis and interpretation of data. BL, JW, and ZA supervised the study. BL and ZA were involved in obtaining funding for the study. All authors contributed to the drafting of the manuscript and approved the final version.

This work was supported by Tianjin Health Bureau of Science and Technology Fund Key Projects (contract: KY12, and 2013KG120), a Local Key Project of Binhai New District, Tianjin of China, and The Project of Prevention and Treatment System on Cerebrovascular Disease in Dagang Oilfield, China.

Recommendations on Stroke Prevention, Diagnosis, and Therapy (1989). Report of the WHO task force on stroke and other cerebrovascular disorders. Stroke 20, 1407–1431.

Copyright © 2016 Long, Lou, Gu, Guo, Wang, Zhu, Zhao, Ning, Li, Wang and An. This is an open-access article distributed under the terms of the Creative Commons Attribution License (CC BY). The use, distribution or reproduction in other forums is permitted, provided the original author(s) or licensor are credited and that the original publication in this journal is cited, in accordance with accepted academic practice. No use, distribution or reproduction is permitted which does not comply with these terms.