Mobile Device Applications for the Visualization of Functional Connectivity Networks and EEG Electrodes: iBraiN and iBraiNEEG

Jorge A. Fuentes3 and

Another brain test is Electroencephalography (EEG), a well-known electrophysiological diagnosis method that measures the electrical activity of the brain. It is a noninvasive technique in which electrodes are attached over the scalp. There are two systems for the placement of electrodes: 10–20 corresponding to 21 electrodes (Jasper, 1958; Klem et al., 1999), and 10–10 which corresponds to 65 electrodes (Nuwer et al., 1998). EEG is the principal diagnostic tool for diseases such as epilepsy.

Mobile devices (such as smartphones and tablets) are becoming increasingly common among users. In a study published by Scott Wilson on November 6, 2013 (Wilson, 2013), sales of phones and tablets are increasing in an annual growth rate of 21.8% (Table 1), implying a broad base of potential users for each application. Mainly, there are four operating systems for mobile devices: iOS used by Apple devices (13.9% of iPhone and iPad), Android used by Samsung Electronics Co Ltd., LG Electronics Inc., Sony Corporation, Google Inc., HTC Corporation, Motorola Inc., Huawei, Xiaomi, etc. (corresponding to 82.8%), Windows Phone (2.6%), Blackberry OS (0.3%) and others (0.4%; IDC Research, Inc., 2015). In the medical field, 79.0% of medical students and 74.8% of junior doctors in United Kingdom owned a smartphone (Payne et al., 2012), and in USA 87% of medical doctors use a smartphone or tablet device in their workplace (Ventola, 2014).

In this article, we describe two applications for iOS and Android-based mobile devices covering 96.7% of the mobile market. One application shows the seven standard functional connectivity networks (Yeo et al., 2011) superimposed on a cerebral cortex (transparent brain) and the other one interactive application shows 21 10–20 EEG electrodes over the Yeo et al. (2011) standard networks.

A mask of the network-level parcellation published by Yeo (Yeo et al., 20112) was used to create the mesh model of the seven standard functional networks (Yeo et al., 2011). These mesh models were built using the Model Maker module (marching cubes algorithm [Lorensen and Cline, 1987]; number of smoothing iterations: 10, filter type for smoothing: Sinc, target reduction during decimation: 25% triangles to be removed, split normals, calculate the normal vectors for the points, pad the input volume with zero value voxels) from the 3D Slicer 3.6.3 software.

MNI coordinates for standard 10–20 EEG electrodes were computed previously (Rojas and Gálvez, 2013). Then using that MNI coordinates, red spheres were positioned over the mesh of the brain cortex and the functional connectivity meshes.

Two applications called iBraiN2 and iBraiNEEG2 were developed for the visualization of Functional connectivity networks.

The application name, iBraiN2, is an acronym that stands for “intrinsic Brain Networks”.

The iBraiN2 application shows a 3-D transparent brain, merged with one of seven standard functional networks (Yeo et al., 2011) that can be selected by the user. The brain can be rotated using the controls on the screen (arrows), and the brain size can be changed by a pinch gesture. From Figures 1–5 the user can see the Graphical User Interface (GUI) of the application and how it is used. 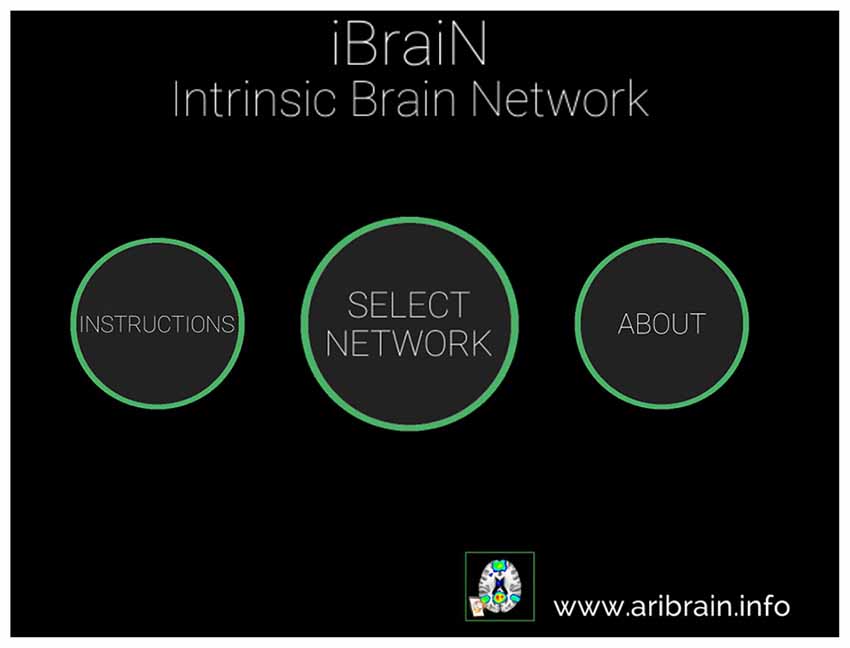 Figure 1. Main window of the iBraiN2 application. By touching “Instructions”, user instructions appear for iBraiN2, by pressing “About” iBraiN2 authoring information appears, and by touching the “Select Network” button the application displays a menu to select a functional connectivity network (see Figure 2). 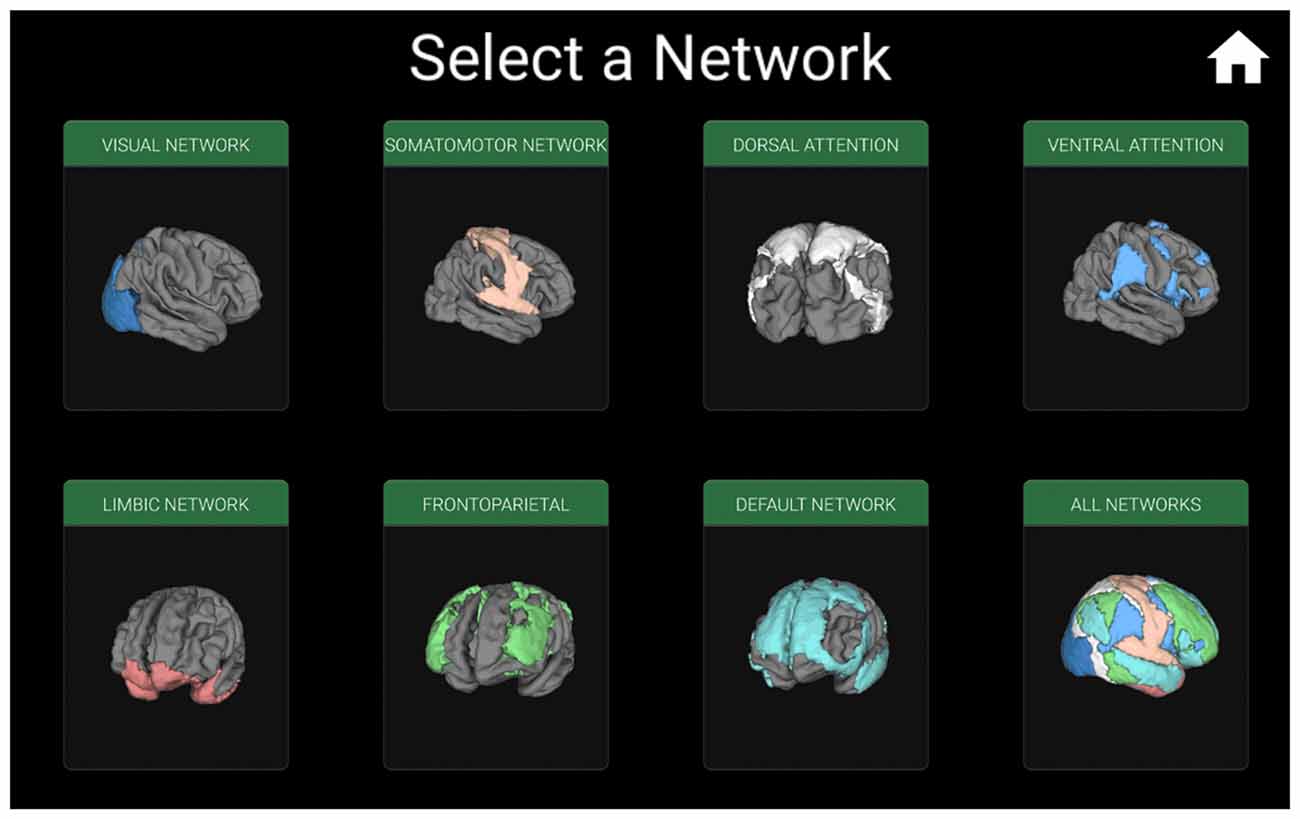 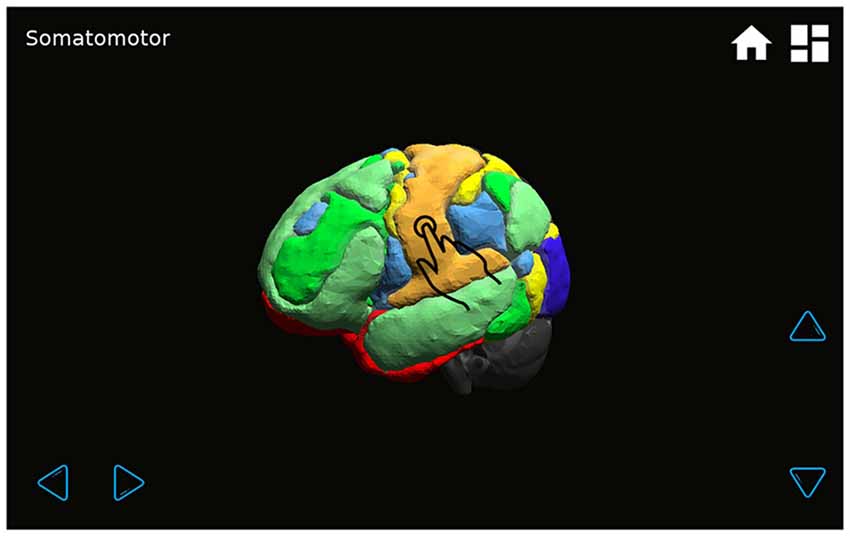 Figure 3. A transparent brain with seven superimposed functional connectivity networks is shown by touching the “All Networks” button (Figure 2). By pressing each network, its name will appear in the upper left-hand corner. The brain can be rotated by pressing the four light blue arrows.

Figure 4. Visual functional connectivity network. In the transparent brain, it can be clearly seen that the visual network is located only in the occipital lobe, and it has no connectivity with other brain regions. The network can be rotated by touching the arrows on the lower right and lower left-hand corners. 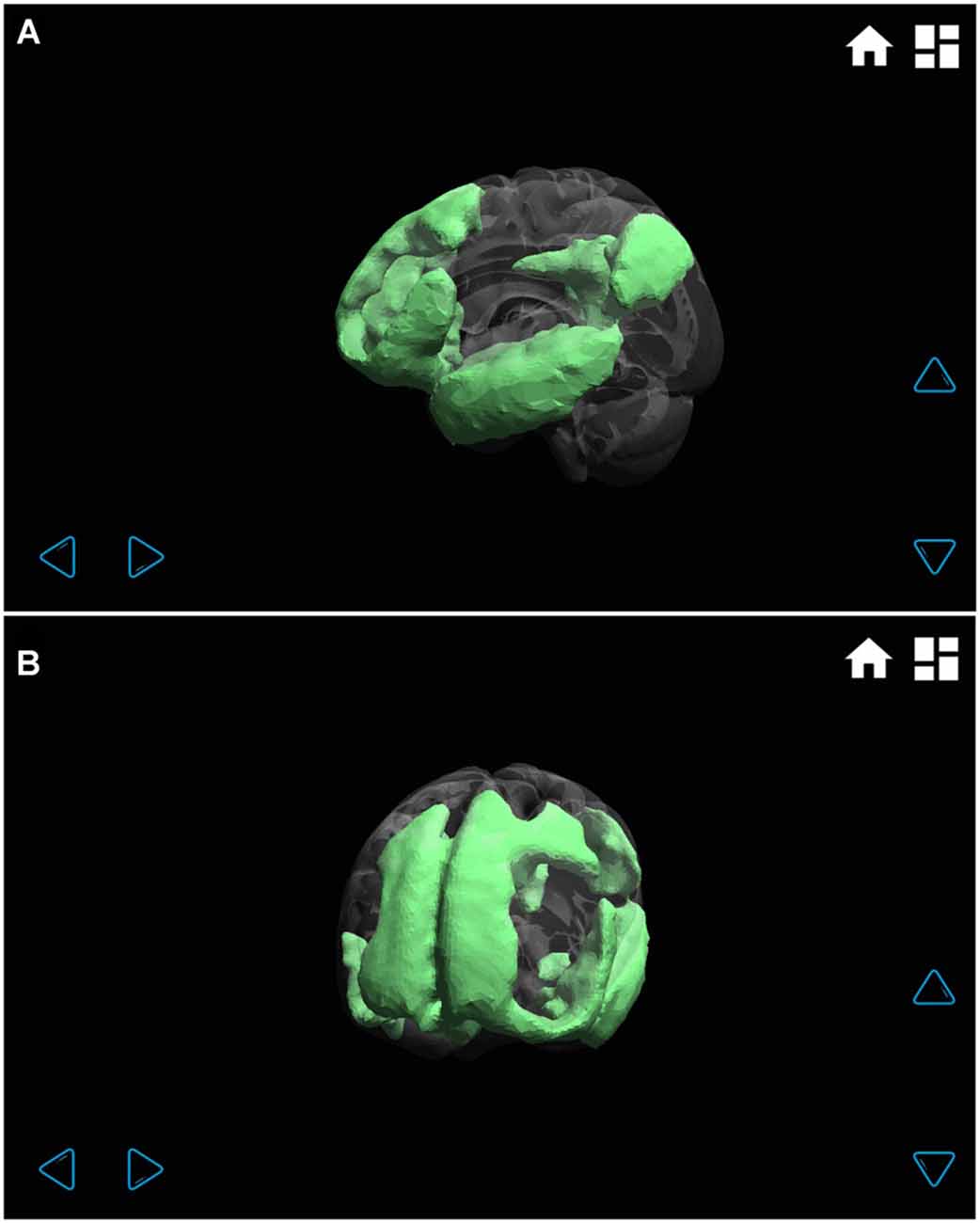 Figure 5. Default mode functional connectivity network displayed at different angles (A left hemisphere, and B left frontal). Through the transparent brain, the different regions that make up this wide network can be clearly seen: mainly frontal, parietal and temporal lobe regions.

The application name, iBraiNEEG2, is an acronym standing for “intrinsic Brain Networks EEG”.

The application shows a transparent brain with seven connectivity networks upon it (Yeo et al., 2011) and 21 red spheres on the brain in the standard 10–20 EEG electrode positions as determined in a previous work (Rojas and Gálvez, 2013). The various GUI windows are shown in Figures 7–9. The name of each EEG electrode and functional network is displayed interactively by touching on each red sphere and on the light bulb, respectively Figures 8, 9.

Figure 7. iBraiNEEG2 main window. iBraiNEEG2 user instructions will be shown by touching the “Instructions” button; by pressing “About” the iBraiNEEG2 authoring information appears, and “Start” shows the transparent brain with the seven connectivity networks (Yeo et al., 2011) and red spheres for the 10–20 electroencephalography (EEG) electrodes (Figure 8). 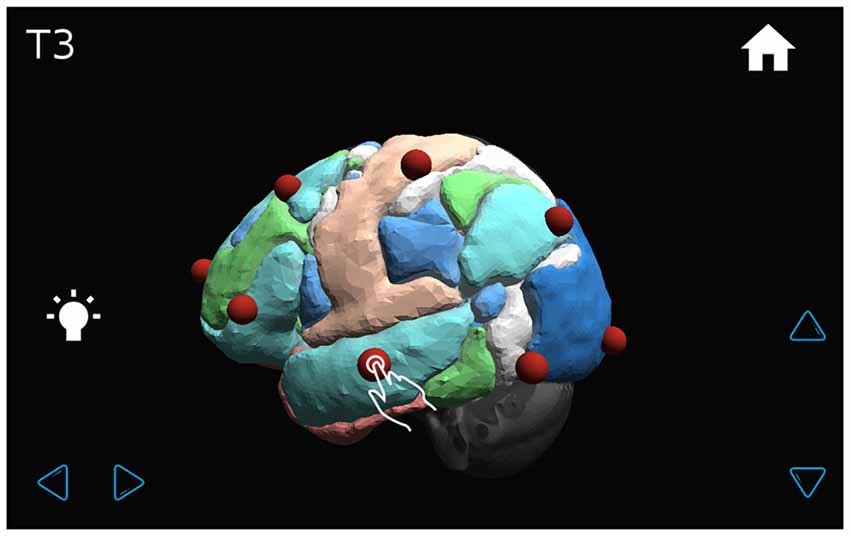 Figure 8. The transparent brain is shown with seven connectivity networks (Yeo et al., 2011) and red spheres on the 10–20 EEG electrode positions. By touching a sphere, the name of the electrode appears on the upper left-hand corner of the screen (for example, T3). 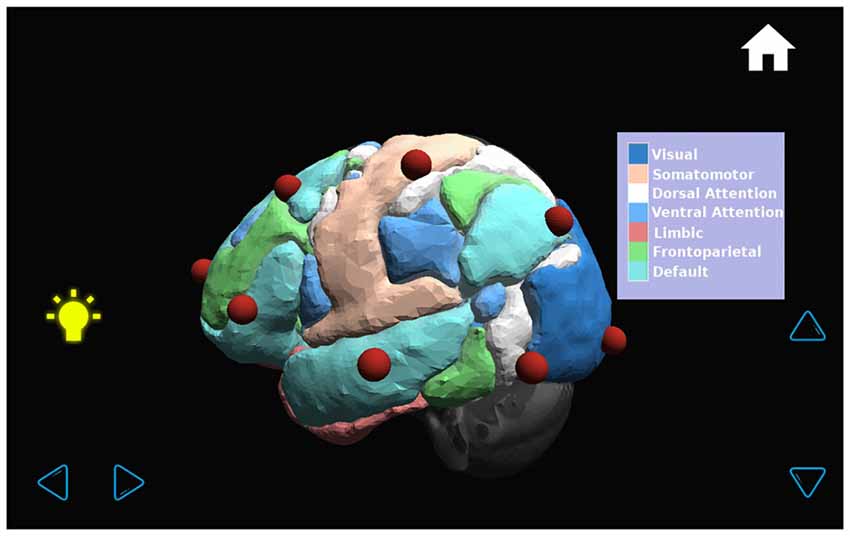 Figure 9. By pressing the bulb on the left of the screen, the name of each of the seven functional connectivity networks (Yeo et al., 2011) appears with a color palette in a window on the right side of the screen.

To install this application on an Android mobile device, select Google Play Store (Google Inc.) and search for the “iBraiNEEG2” application (use QR code in Figure 10A). In iOS App Store (Apple Inc.), search “iBraiNEEG” (without the number 2) and install (to install it use QR in Figure 10B). More information about both applications can be found at http://www.aribrain.info website.

Should the scientific community adopt a brain atlas as a functional connectivity gold standard, future updates of the applications would greatly benefit from the use of such atlas. A very relevant candidate for this standard would be a recently published brain atlas (Glasser et al., 2016) that uses multi-modal magnetic resonance images from the Human Connectome Project (HCP).

In conclusion, the applications for mobile devices shown here are useful for education and training purposes (medical professionals) in functional connectivity related topics and EEG analysis regarding standard functional connectivity networks. Also, the advantage of applications for mobile devices is associated with their portability and availability.

Pieper, S., Lorensen, B., Schroeder, W., and Kikinis, R. (2006). “The NA-MIC kit: ITK, VTK, pipelines, grids and 3D slicer as an open platform for the medical image computing community,” in Proceedings of the 3rd IEEE International Symposium on Biomedical Imaging: from Nano to Macro (Arlington, VA), 698–701.

Copyright © 2016 Rojas, Fuentes and Gálvez. This is an open-access article distributed under the terms of the Creative Commons Attribution License (CC BY). The use, distribution and reproduction in other forums is permitted, provided the original author(s) or licensor are credited and that the original publication in this journal is cited, in accordance with accepted academic practice. No use, distribution or reproduction is permitted which does not comply with these terms.