Alzheimer’s disease (AD) is a devastating neurodegenerative disorder affecting millions of people worldwide. The etiology of AD is not known, and intense research involving multimodal neuroimaging data (e.g., MRI, functional MRI, PET etc.) is extensively used to identify the causal molecular process for AD. In this context, various imaging-based databases accessible to researchers globally, are useful for an independent analysis. Apart from MRI-based brain imaging data, the neurochemical data using magnetic resonance spectroscopy (MRS) provide early molecular processes before the structural or functional changes are manifested. The existing imaging-based databases in AD lack the integration of MRS modality and, thus, limits the availability of neurochemical information to the AD research community. This perspective is an initiative to bring attention to the development of the neuroimaging database, “ANSH,” that includes brain glutathione (GSH), gamma aminobutyric acid (GABA) levels, and other neurochemicals along with MRI-based information for AD, mild cognitive impairment (MCI), and healthy subjects. ANSH is supported by a JAVA-based workflow environment and python providing a simple, dynamic, and distributed platform with data security. The platform consists of two-tiered architecture for data collection and management further supporting quality control, report generation for analyzed data, and data backup with a dedicated storage system. The ANSH database aims to present a single neuroimaging data platform incorporating diverse data types from healthy control and patient groups to provide better insights pertaining to disease progression. This data management platform provides flexible data sharing across users with continuous project monitoring. The development of ANSH platform will facilitate collaborative research and multi-site data sharing across the globe.

Hence, the inclusion of neurochemical data is required and will play a profound role in AD research for identifying a causal molecular process for AD, possible therapeutic development, and monitoring disease progression. ANSH is the first platform where antioxidant, neurotransmitter, and energy metabolites are discussed and will be available to the research community.

Since then, many initiatives progressed toward the open sharing and reusability of the original data. This section briefly describes more details of these databases. The University of Washington School of Public Health supported by the National Institute of Health (NIH) started the Alzheimer’s Disease Research Center (ADRC) with a mandate to provide a comprehensive advanced AD research and related disorders from 39 ADRCs at various medical schools across the United States. NACC started with a behavioral and genetic dataset platform and then gradually incorporated MR imaging (Cronin-Stubbs et al., 2000; Beekly et al., 2004). Subsequently, an increasing number of experiments led to the generation of heterogeneous datasets, with an urgent need for standardization and distribution of this information. This initiative resulted in the creation of IDA-LONI for data sharing concerning the disease progression from various research sites globally1. IDA-LONI is a hub comprising approximately 138 studies from various disease datasets with new studies added overtime (Petersen et al., 2010). LONI is fortified with upload, download, quality check (QC), processing, and various other user-level sharing features. The Alzheimer’s disease neuroimaging initiative (ADNI; Petersen et al., 2010) and the human connectome projects are associated with this platform (Rex et al., 2003). LORIS is a web-based platform for neuroimaging studies (Das et al., 2011). LORIS consists of a wide range of datasets including neurological, behavioral, and imaging data from anatomical, functional maps, atlases, and MRI models. LORIS streamlined a framework for storing and processing behavioral, clinical, neuroimaging, and genetic data. The combination of the software platform and web-based approach for data management, throughput task, and data sharing to the approved users was supported by the Neuroimaging Archive Toolkit (XNAT; Marcus et al., 2007), Analysis of Functional Neuroimages (AFNI; Cox, 1996), Human Imaging Database (HID; Marcus et al., 2011), and Brain Imaging Data Structure (BIDS; Gorgolewski et al., 2016), which provide the user with the data management tools for a better analysis of data across a diverse number of neuroimaging datasets. The Neuro-Imaging Tools and Resource Collaboratory (NITRC) has played a vital role in hosting all the neuroimaging software repository, data, and toolboxes under one platform2.

MRS data can be generated from any part of the brain using single-voxel mode or multivoxel mode (Mandal, 2007). MRS data is generally smaller in size and easy to handle compared to MRI-based data. Various advanced packages are available to process MRS data, and absolute quantitation of various neurochemicals is also possible (Mandal and Shukla, 2020). These MRS-processing packages can be added with a suitable plugin so that processed MRS data can be utilized in multimodel big data analytics (Sharma et al., 2019). Various MRS pulse sequences are now available to detect specific neurochemicals (GABA, GSH, glutamate/glutamine) without any ambiguity (Terpstra et al., 2003). Figure 2A represents the MRS spectra from the left hippocampus by placing the single-voxel (25 × 25 × 25 mm3), MRS data was acquired using a 3T MRI (Achieva, Philips) scanner, and processed using the KALPANA software (Mandal and Shukla, 2020). Figure 2B represents absolute quantitation of GSH in relevant amount (mM) from the left hippocampus of HO, MCI, and AD patients (Mandal et al., 2015). Significant depletion of GSH level from the left hippocampus, as detected by in vivo MRS, is sensitive for comparing HO, MCI, and AD patients. MRS is also the only technique that can be used to detect the GSH conformers in vivo, and these conformers are likely to play an important role in the AD disease process (Mandal et al., 2017, 2019; Shukla et al., 2020). The changes in the GSH level are susceptible to AD pathology only. Data indicated that, GSH level in the left cerebellum of AD and HO did not alter significantly (p = 0.536); however, the specific change in GSH in the hippocampal regions in the same AD and HO groups was found to be significant (p < 0.001; Mandal et al., 2015). The database involving 31P MRS is critical to understand the impaired energy metabolism process (e.g., increased hippocampal pH) in the AD brain in contrast to the age-matched normal brain (Mandal et al., 2012; Rijpma et al., 2018). 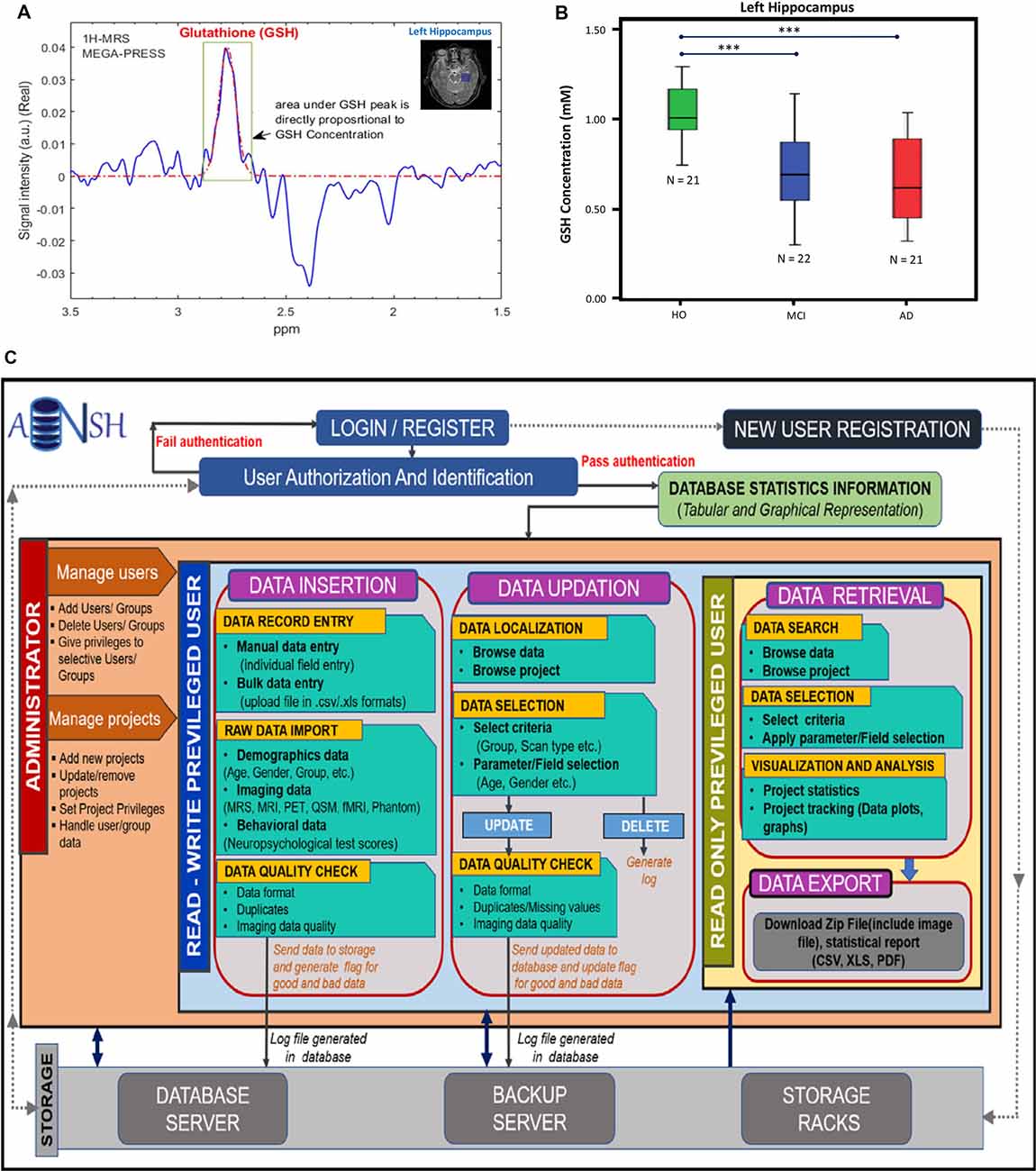 Figure 2. (A) 1H-MRS MEGA-PRESS edited spectra for in vivo glutathione (GSH) estimation in the left hippocampus of a HO brain. (B) Box–whisker plot showing significant GSH concentration depletion in the mild cognitive impairment (MCI) and AD groups compared to the HO group. ***The significance level was set at p < 0.001 (Mandal et al., 2015). (C) This workflow illustrates the conventions for the construction of database and management of data. The access of data is provided by the user authentication. The privileged user is provided with two main segments, i.e., data insertion and updation, where the user can review data and can make appropriate changes. Both segments follow the raw image quality control (QC) before putting the data in the backup servers. It will also keep a track of the data usage and generate logs for the changes. Read-only privileged users are enriched with the segment for data retrieval to export image data and the data reports using various search filters and data selection parameters. All segments are interconnected by the backend server and the rack system of the ANSH.

This perspective will bridge the gap providing the unique neurochemical data in AD research.

Technical Details of the ANSH Database in Brief

Some key features of the ANSH are: (1) distributive platform; (2) user login with privacy implementations; (3) quality check; (4) image viewer; (5) centralized approach to fetch data; (6) real-time tracking and backup of the database; (7) heterogeneous data; (8) effortless import/export of data with the use of data-processing pipelines; and (9) report generation.

ANSH provides a dynamic and comprehensive database management system for the heterogeneous neuroimaging datasets, specifically MRI and multinuclear MRS for HO, MCI, and AD categories along with the neuropsychological test scores. The MRI data consist of diverse 3D T1, T2-weighted, Flair, and QSM images for different age groups of healthy young as well as HO subjects. Other imaging modalities such as PET, fMRI, and DTI will also be added to the ANSH database. MRS data for GSH and GABA are provided for age-matched HO, MCI, and AD groups along with T1, T2-weighted, and Flair MRI dataset. The neuropsychological score broadly constitutes from the mini-mental state examination, clock drawing test, trail making tests. The flow diagram of the ANSH is presented in Figure 2C.

Data entry in the ANSH database can be accomplished individually using data entry forms or imported in bulk. Data insertion and updation rights are held by the administrator and given to the write-privileged users for the specified projects. Data retrieval rights are entitled to all users. The ANSH also provides detailed data report, data visualization plots (i.e., bar and pie charts) as image files and statistical information in the form of pdf and excel which can be exported afterwards.

In the ANSH database management system, the user can access the database through a secure desktop application. Data imported or entered, undergoes a rigorous quality assurance process with a quality flag level. This quality tagged data is sent to the server for storage and subsequently history logs are maintained and stored in the ANSH server tracking associated changes.

Data security is provided in multiple steps: (1) authorized users will be granted access to the database, (2) quarantine of sensitive files (e.g., user password file), where files are encrypted and hashed, (3) tracking user behavior against data, (4) successful/failed attempts to establish connection are logged to track intruders, (5) restricting user access by designing and granting appropriate user with limited administrative privileges, and (6) database backups are taken as a part of security protocol, where these backups allow to recover the lost data that may have resulted from hardware failure, data corruption, theft, or natural disasters.

The ANSH database construction is a sincere attempt to bring the critical neurochemical information from HO, MCI, and AD patients to the global researchers for comparative analysis. WE will also add Parkinson disease data and other mental disorders data in ANSH database. This novel program is in an expanding stage and needs further infrastructure support to build a robust system to cater to the Indian and global brain research community.

The original contributions presented in the study are included in the article, further inquiries can be directed to PM through email pravat.mandal@gmail.com.

Copyright © 2020 Mandal, Sandal, Shukla, Tripathi, Singh and Roy. This is an open-access article distributed under the terms of the Creative Commons Attribution License (CC BY). The use, distribution or reproduction in other forums is permitted, provided the original author(s) and the copyright owner(s) are credited and that the original publication in this journal is cited, in accordance with accepted academic practice. No use, distribution or reproduction is permitted which does not comply with these terms.