Systemic chronic active Epstein-Barr virus infection (sCAEBV) is an intractable disease that present activated EBV-infected T- or NK-cells and their clonal proliferation. When inflammatory symptoms persist and proceed, a lethal complication of hemophagocytic lymphohistiocytosis (HLH) develops, but its biomarker to represent the pathophysiology and an effective agent to cure have not been developed as of today. It is known that interferon-γ (IFN-γ) level in the peripheral blood increases in HLH correlatedly with the disease condition and that antagonistic anti-IFN-γ antibody is effective against HLH. We examined the plasma level of IFN-γ to investigate its role in the disease condition of sCAEBV. sCAEBV was diagnosed based on the criteria conforming to the definition of sCAEBV in the WHO classification issued in 2017. As it was previously reported, disease activity was defined as the condition positive for any one of the followings: fever, liver dysfunction, progressive skin lesions, vasculitis, and uveitis. Eighteen sCAEBV patients were examined. Their plasma IFN-γ levels were significantly higher than those of healthy donors. The levels in sCAEBV patients with disease activity were higher than those without disease activity. The mRNA expression of IFNG was detected in EBV-infected cells of all patients. We also detected a correlation between plasma IFN-γ levels and mRNA levels of EBV-infected cells in peripheral blood mononuclear cells. These results suggest that EBV-infected cells produce IFN-γ in sCAEBV. Although the difference was not significant, the patients whose plasma IFN-γ levels at diagnosis were higher than 40 pg/mL tended to result in poorer survival than those with lower levels. We concluded that plasma IFN-γ is a potential biomarker that indicates disease activity of sCAEBV. Further study shall confirm its significance.

Systemic chronic active Epstein-Barr virus infection (sCAEBV) is an intractable, progressive disease (1, 2). The disorder is classified as a T-cell and NK-cell neoplasm in the revised edition of the WHO Classification of Tumours of Haematopoietic and Lymphoid Tissues published in 2017 (3). sCAEBV is not only a lymphoid neoplasm but is also an inflammatory disease. In sCAEBV, the activation of EBV-infected T- or NK-cells causes continuous or recurrent systemic inflammation and progresses to a lethal complication called hemophagocytic lymphohistiocytosis (HLH). The only curative treatment strategy that can eradicate EBV-infected T- or NK-cells today is allogeneic hematopoietic stem cell transplantation (allo-HSCT) (4), but sCAEBV patients with disease activity result in poorer outcomes after allo-HSCT compared to those without. Disease activity is defined as the status with any one of the following conditions: fever, elevated alanine transaminase (ALT), vasculitis, and uveitis (5, 6). Unfortunately, medical treatment that successfully controls disease activity has not been established. It is an urgent issue to clarify the mechanism of disease activity development and to establish an effective treatment strategy for sCAEBV.

There are reports of inflammatory cytokines being responsible for the inflammation occurrence in sCAEBV (7). Among those cytokines, interferon-γ (IFN-γ) is important in the pathogenesis of HLH (8). It is now clear that this cytokine is produced and secreted in EBV-positive NK-cells and induces the differentiation and the activation of macrophages, which are responsible for HLH development in EBV-positive NK-cell neoplasms (9). In this study, we investigated the role of IFN-γ in the development of sCAEBV.

We diagnosed patients based on the diagnostic criteria of sCAEBV (4, 6), which was developed by the Research Group of Measures Against Intractable Diseases of the Ministry of Health, Labor, and Welfare of Japan. The criteria are compatible with the definition of sCAEBV in the WHO 2017 classification.

2. EBV infection of T- or NK-cells in the affected tissue or PB.

The definition of liver dysfunction was an increase in ALT levels to two times higher than the upper limit of normal. Progressive skin lesions and vasculitis were diagnosed by pathological examination. Uveitis was diagnosed by the patients’ attending physicians and ophthalmologists. The disease status of patients without any of these clinical findings was determined as inactive.

Isolation and identification of sCAEBV cells

Detection of the clonality

The clonal proliferation of EBV-infected cells was detected by Southern blotting for EBV-terminal repeat (11).

We examined 18 sCAEBV patients (age of 18-63 years, median 33 years; ten males, eight females; CD4 type n = 7, CD8 type n = 1, and CD56 type n = 10). The characteristics of the patients are summarized in Table 1. The clonal proliferation of infected cells was detected in the PBMCs of all patients. Fourteen patients had disease activity. Three patients accompanied HLH and 2 of them were untreated. 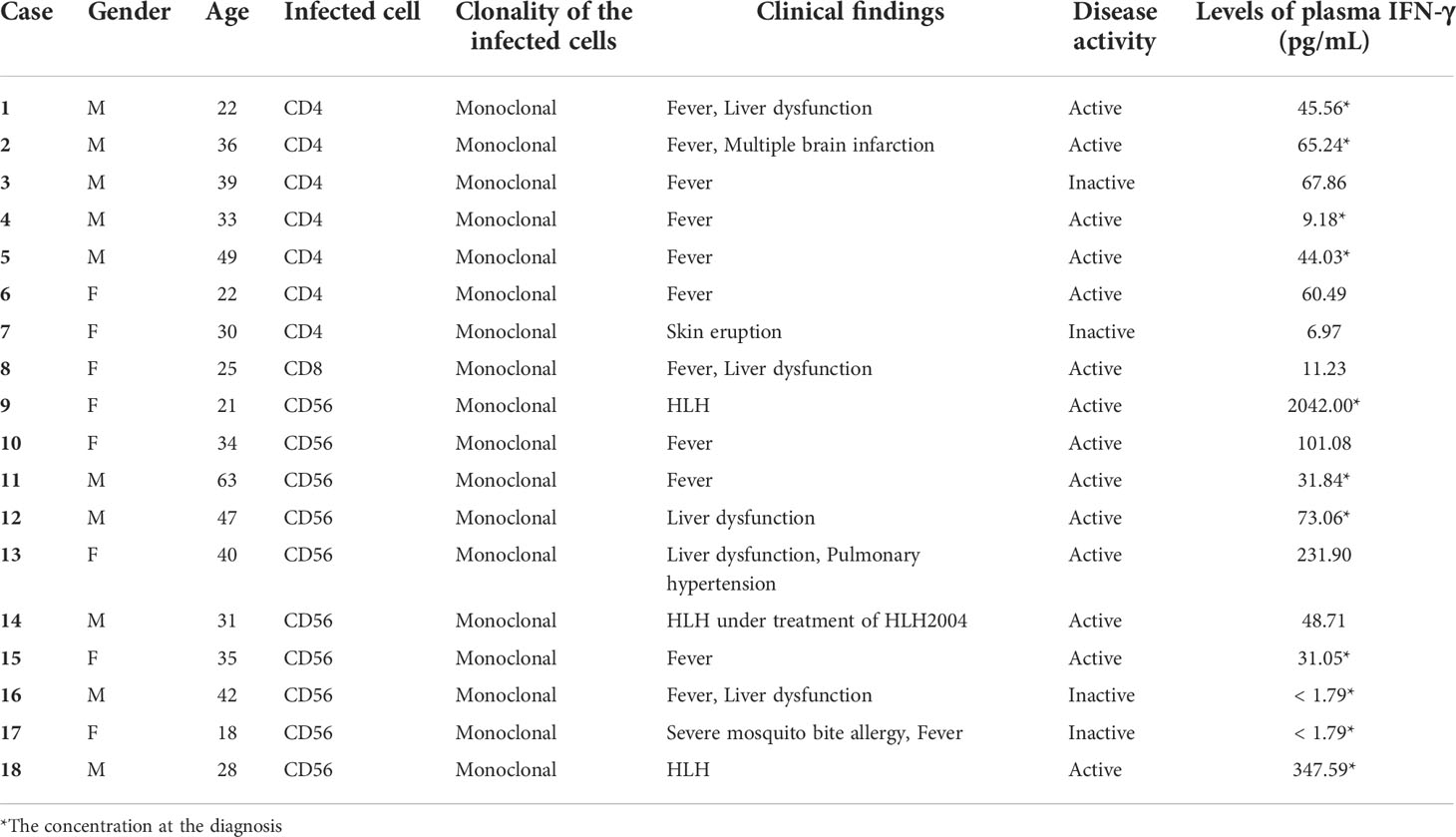 Table 1 The characteristics of the patients. 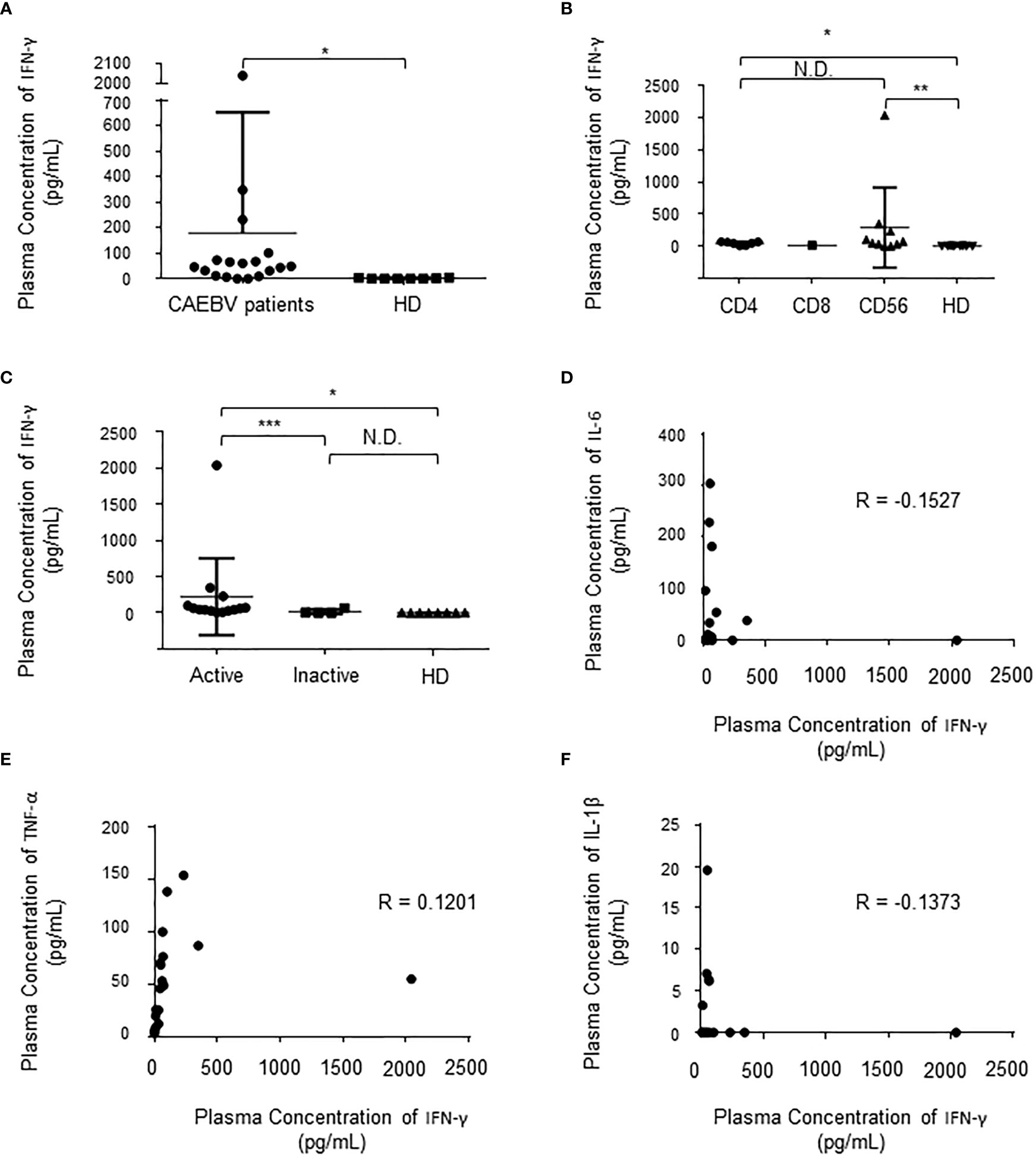 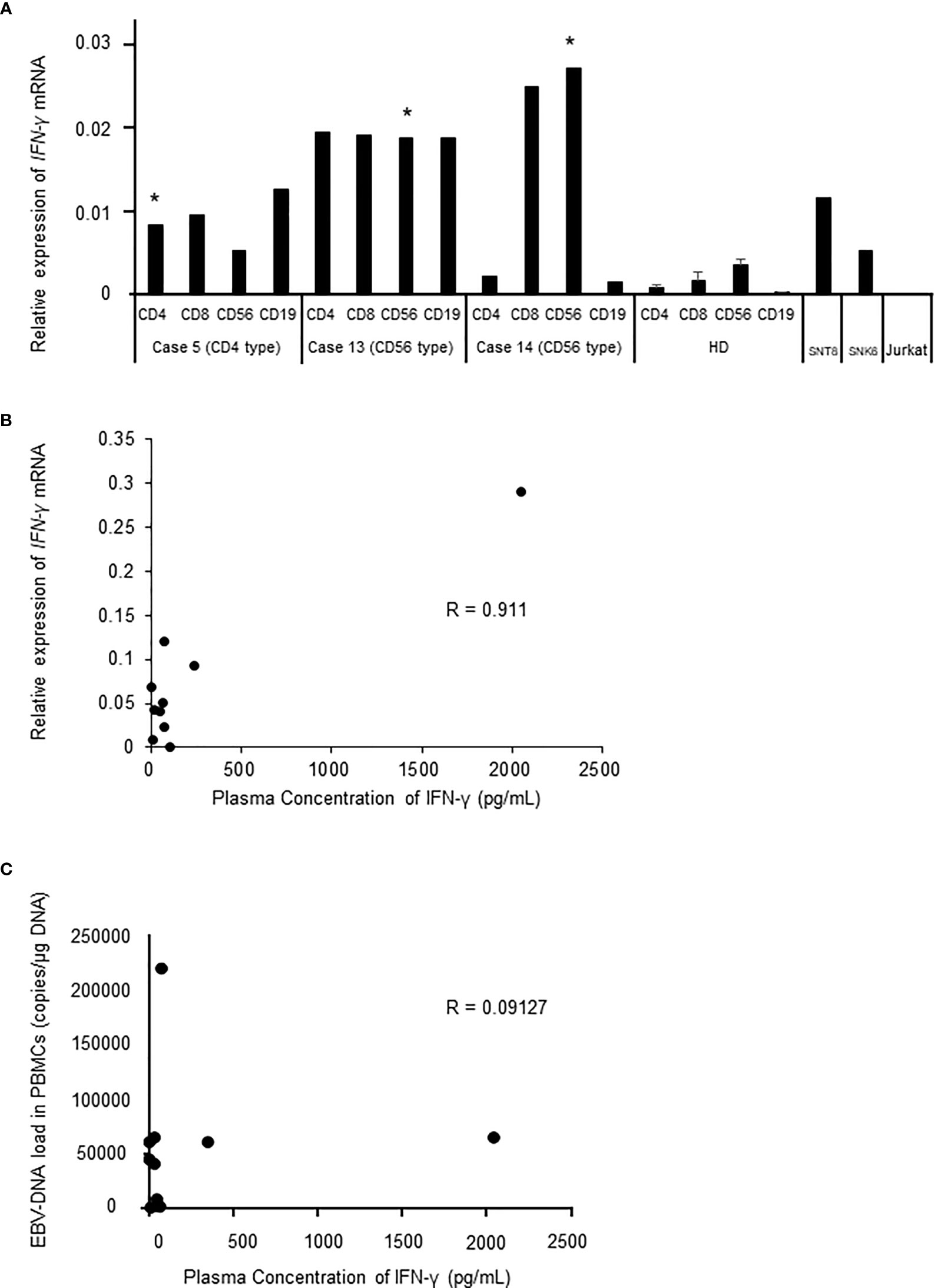 Do plasma IFN-γ levels affect the survival of sCAEBV? 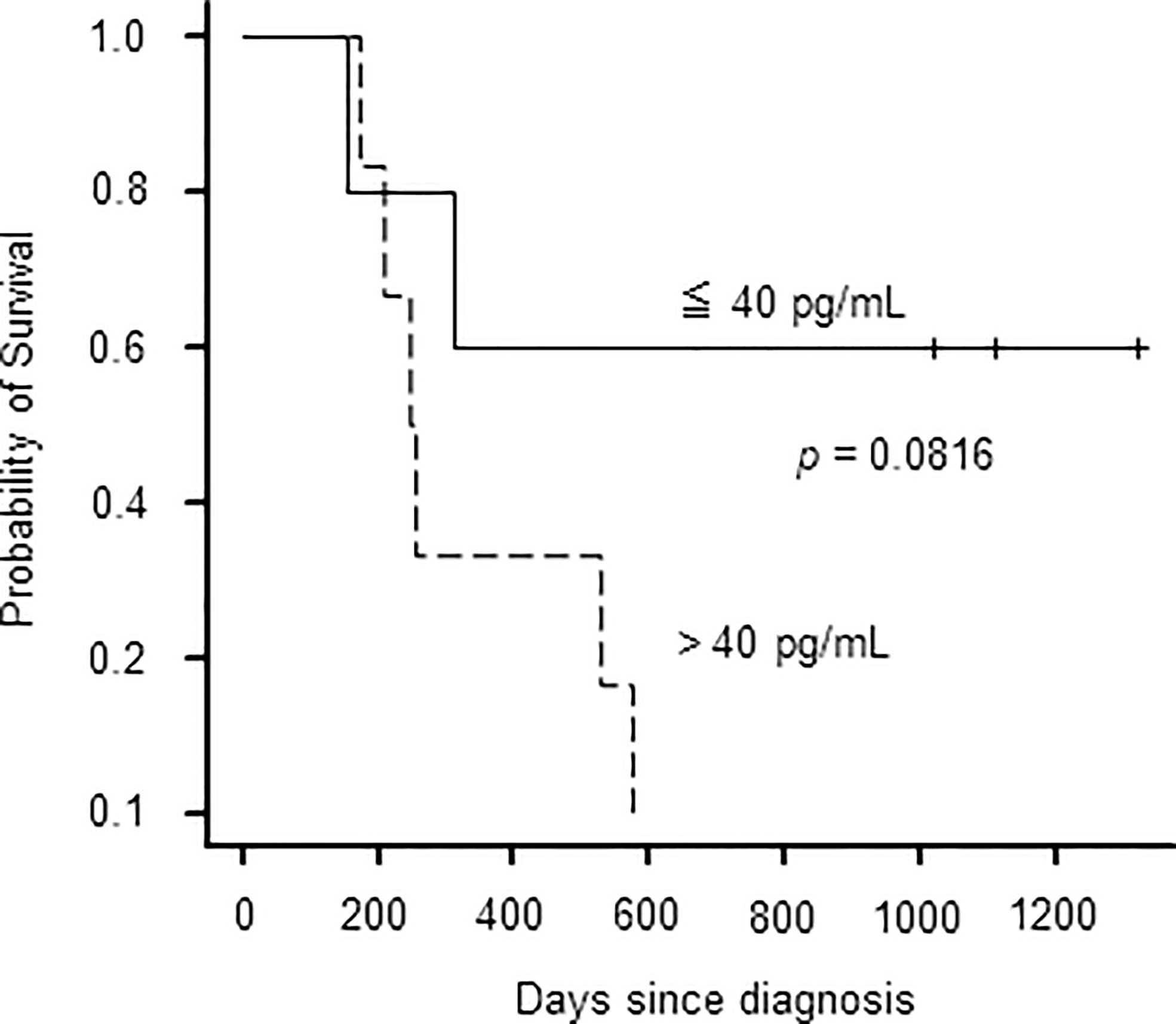 Figure 3 The probability of survival of sCAEBV patients by plasma concentration of IFN-γ.

The plasma IFN-γ levels during the clinical course

Finally, we examined if plasma IFN-γ level decreased to coincide with the resolution of disease activity of sCAEBV. Case 18 received an allo-HSCT, but did not achieve complete response. In EBV-infected T- or NK-cells of sCAEBV, STAT3, a substrate of JAK1/2, is constitutively activated and mediates the expression of mRNA of IFN-γ (7). Based on a report stating the efficacy of ruxolitinib on inflammatory symptoms of sCAEBV (17), we treated Case 18 with ruxolitinib. We started its administration 5 mg/day and increased to 10 mg/day. Fever resolved on the next day of the ruxolitinib initiation. The clinical findings on day 7 are shown in Table 2. The patient became afebrile and his liver function improved. Interestingly, the concentration of IFN-g in the plasma decreased after this treatment. 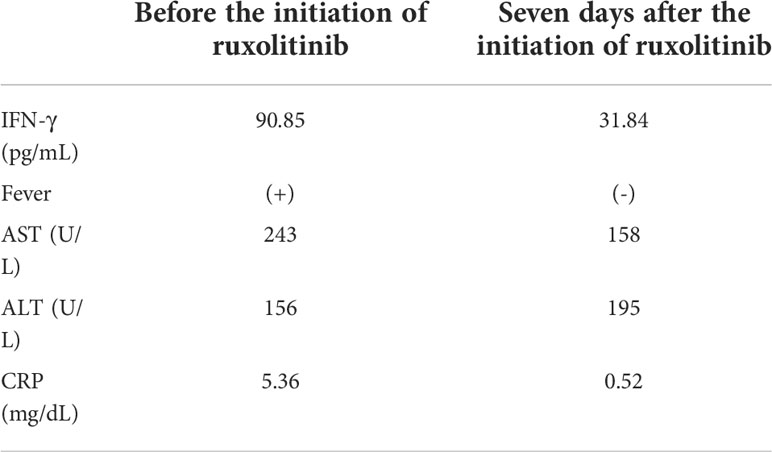 Table 2 The effects of ruxolitinib on Case 18.

We had reported that IFN-γ is produced in EBV-infected T- and NK-cells of sCAEBV patients (7). We had also reported that constitutively activated STAT3 in EBV-infected cells contributed to the production of IFN-γ (7). In this study, we detected an elevated expression of IFNG mRNA in EBV-infected cell fraction and a correlation between the plasma IFN-γ levels and the mRNA levels of EBV-infected cells. These results suggest that EBV-infected cells produce IFN-γ in sCAEBV. We also detected IFNG mRNA expression in the fractions of the non-infected cells of the patients PBMCs. Not only T or NK cells but also B cells, monocytes, and macrophages can produce IFN-γ (18). Thus, these EBV-negative cells may be activated and may play some roles in the production of IFN-γ in sCAEBV. Various types of immune cells not only exist in PB but also infiltrate the lesions of sCAEBV including EBV-negative cells. We need to examine the infiltrating cells of pathophysiological tissues as well as examining PB.

IFN-γ is a cause of inflammatory symptoms and macrophage activation leading to HLH, a lethal complication. In the present study, we found that the concentration of IFN-γ is significantly higher in sCAEBV patients with disease activity compared to sCAEBV patients without disease activity. Two patients with the highest plasma IFN-γ levels had untreated HLH. In Case 18, as the activity of sCAEBV improved after starting ruxolitinib administration, the concentration of IFN-γ in the plasma decreased. These findings led us to assume that IFN-γ is a potent biomarker of disease activity and a cause of HLH. There was no significant correlation with IFN-γ concentration and the survival time probably because this study’s sample size was too small. Further study is necessary to prove the effects of IFN-γ on the outcome of sCAEBV.

Since IFN-γ is a cause of inflammation and HLH development in sCAEBV, it is indispensable to suppress IFN-γ to manage sCAEBV. Ruxolitinib, a JAK1/JAK2 inhibitor, is reported to reduce the expression of IFNG mRNA in EBV-infected T- and NK-cells of sCAEBV patients. Ruxolitinib had effects on the inflammatory symptoms of Case 18. We highly expect the drug to be a potent therapeutic remedy (7). Emapalumab, an IFN-γ-blocking antibody, has shown its usefulness in a clinical trial of pediatric primary HLH (19). This result suggests its potential efficacy in controlling the disease condition of sCAEBV.

Our study has a limitation for not targeting enough number of patients because sCAEBV is a rare disease. To explore the validity of IFN-γ as a biomarker and its correlation with prognosis, we must accumulate more cases and more biological samples. There is a movement to establish a registry system of sCAEBV in Japan. We hope this system will be effectively used to for further investigation targeting a larger number of registered cases of sCAEBV.

The studies involving human participants were reviewed and approved by Tokyo Medical and Dental University (TMDU) (Approval #G2000-176) and St. Marianna University School of Medicine (Approval #4753). Ruxolitinib treatment for sCAEBV was approved by the institutional review board of TMDU. The patients/participants provided their written informed consent to participate in this study.

We give special thanks to Ayako Komoto for her excellent editorial support to the authors during the preparation of this manuscript.

Copyright © 2022 Uemura, Ohashi, Yoshimori, Nishio, Hirakawa, Shimizu, Wada, Imadome and Arai. This is an open-access article distributed under the terms of the Creative Commons Attribution License (CC BY). The use, distribution or reproduction in other forums is permitted, provided the original author(s) and the copyright owner(s) are credited and that the original publication in this journal is cited, in accordance with accepted academic practice. No use, distribution or reproduction is permitted which does not comply with these terms.