University of the Azores, Portugal

The decline in abundance and diversity of insect communities is a current topic of concern to society as a whole (e.g., Hallmann et al., 2017; Sánchez-Bayo and Wyckhuys, 2019). This is because some factors in this process, e.g., climate change and habitat loss, are influenced by human activity (Ceballos et al., 2017; Meyer et al., 2020; Milanovic et al., 2021; Wagner et al., 2021). An important factor threatening insects is urbanization (McGlynn et al., 2019), which increases the area of urban settlements at the expense of agricultural land, forest, and other land uses (Goddard et al., 2010; Jones and Leather, 2012; Rocha et al., 2018; Milanovic et al., 2021). The effect of urbanization has been well-studied on ladybirds (Coleoptera, Coccinellidae) (Honek et al., 2021; Sloggett, 2021). This family includes a number of predatory species feeding mainly on aphids (Hodek et al., 2012). The aphidophagous species of coccinellids are easily identifiable (Jouveau et al., 2018), they can be picked up by sampling methods, which allows their research in the urban environment where they are assembled mainly on trees infested with aphid populations (Honek et al., 2017; Rocha et al., 2018). In addition to the availability of prey, coccinellids species are also affected by the microclimate, the possibility of immigration from source populations living in the city surroundings, and interactions with other species of the guild of aphid predators (Korányi et al., 2021; Sloggett, 2021). Therefore, coccinellids are a suitable subject for study into the effect of urbanization on insects. Covering urban areas with impervious surfaces, such as buildings and paved or tarmac roads, has a negative effect on the quality of habitats: urban green spaces (where coccinellid prey and its host plants can persist) is fragmented into small discontinuous islands (Rocha et al., 2018; Sloggett, 2021). Urbanization of large areas can thus negatively affect the presence and abundance of coccinellids in the area by reducing the availability of breeding sites and increasing the need for migration abilities of coccinellids to enable displacement from undisturbed habitats of the city surroundings to the center or between green islands in urban areas (Sloggett, 2021). Fragmentation of green spaces may cause a shortage of food and extinction or emigration of the local population of coccinellids.

Each city differs in both the size of its urbanized area and the expansion and degree of fragmentation of its urban green spaces (Cepelová et al., 2017; Greyvenstein et al., 2021). To study the effects of these differences, it is necessary to compare coccinellid populations in centers and outskirts for a number of different sized cities. Here, we report the results of a study investigating coccinellid occurrence and abundance in Prague, a city of ~1 million inhabitants located in the temperate zone of Central Europe. We used the results of a four-year study (2016–2019) of coccinellid communities on lime trees (Tilia spp.) carried out in this city, which enabled evaluation of differences in composition and abundance of native species in the outskirts and center. As the known negative impact of urbanization, we hypothesize that in the center of Prague, there will be lower diversity and abundance of coccinellids than in the outskirts.

Between 2016–2019, coccinellids were sampled in two areas, henceforth called “outskirts” and “center,” situated at a distance of ~10 km in the western part of Prague, Central Europe. The difference in urbanization at the outskirts and center areas was quantified as the percentage of the area surrounding the sampling sites (a circle of 500 m radius centered at each sampling site) covered by impervious surfaces (buildings, streets, parking places, etc.) (Honek et al., 2018b). This value was 39 ± 3.0% in the outskirts and 71 ± 5.6% in the center. This was determined using maps available at https://en.mapy.cz. Coccinellids were sampled at 14 localities (henceforth called sites), eight in the outskirts, and six in the center (Figure 1). At each site was a group of ≥5 lime trees (Tilia cordata Mill. and/or Tilia platyphyllos Scop.). Coccinellids were sampled on these groups of lime trees in regular intervals (Table 1). Sampling at a particular site and on a particular date is henceforth called a “sampling session.” In each sampling session, the coccinellids were collected of all lime trees present at the site. The result of the sampling session was therefore a mixed set of coccinellids from all lime trees growing at the site, henceforth called sample. The total number of samples collected is shown in Table 2. Sampling from the canopy up to a height of c. 3 m was standardized by using a standard sweep net (35-cm diameter, 140-cm handle) operated by J.S. (center) and A.H. (outskirts). Sampling (80–200 sweeps at each site) occurred between 08.00 and 18.00 h on sunny and calm days. The coccinellid adults were identified regarding species (for illustration see Nedvěd, 2020) immediately and were released at the site. 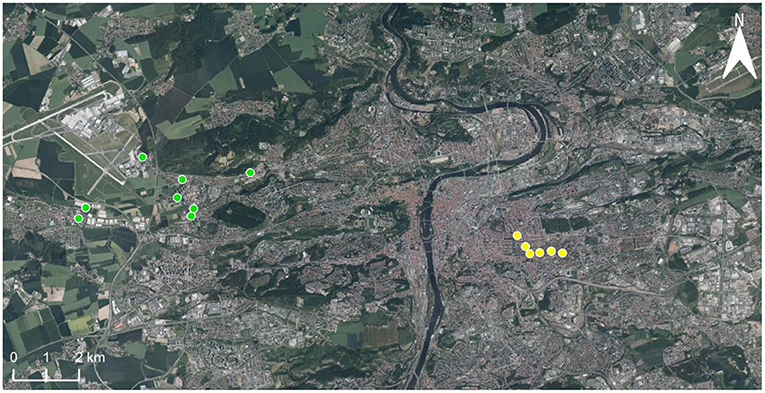 Table 1. Dates of sampling in the outskirts and in the center. 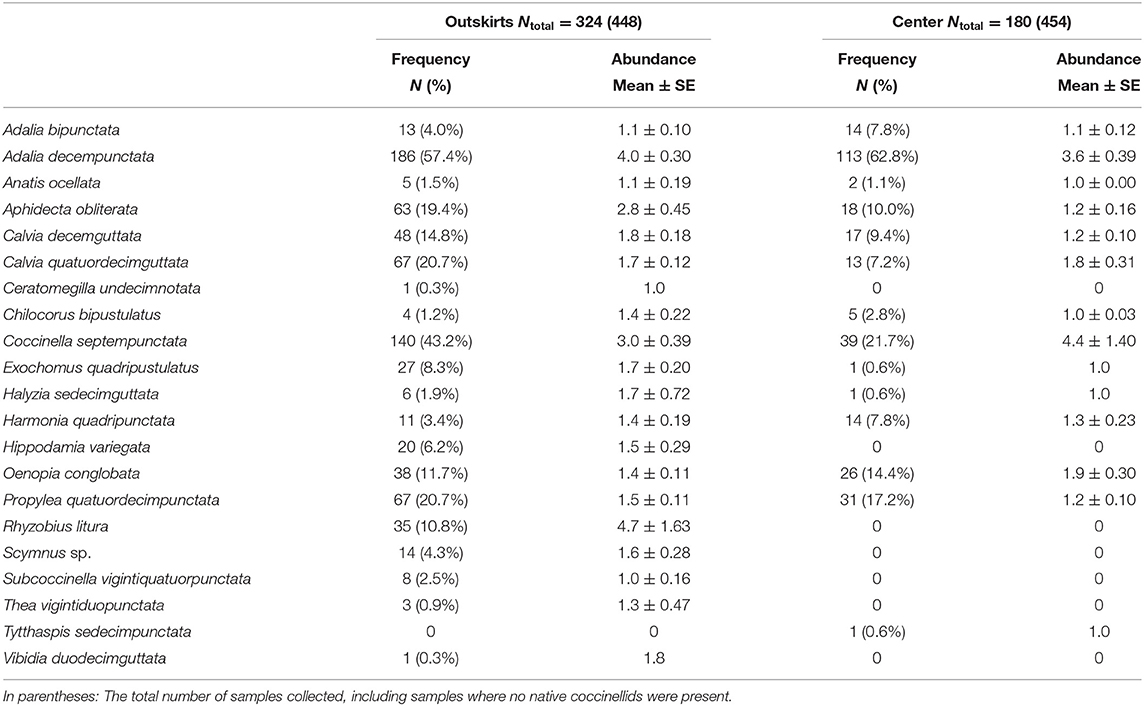 Analyses of results from sampling sessions included samples that consisted of ≥1 native coccinellid adult. The presence of coccinellid species was described by two characteristics: (i) the presence/absence of the species in the sample and (ii) the abundance of species, which was the number of individuals recalculated per 100 sweeps. Characteristic (i) was used as a standard to evaluate the differences in species occurrence between outskirts and centers, and characteristic (ii) was used to study the intraspecific differences in population density between the outskirts and centers. The occurrence of a particular species in an area (outskirts or center) was described as the percentage of sampling sessions with a positive characteristic value (i) and its abundance as the average of the characteristic values (ii). Characteristics (i) and (ii) were correlated, and a significant linear relationship was found between the two characteristics (Figure 2).

Figure 2. Relationship between the two characteristics of the presence of coccinellid species, species abundance (average number of individuals per 100 sweeps) and species frequency (the percentage of samples in which the species was found). Each symbol represents one species of coccinellid, in the species composition in the outskirts (■) and center (▴). Hollow symbols: outliers not included in the calculation of regression (□), Rhyzobius litura (Δ), Coccinella septempunctata. Regression: y = 0.0155x + 1.1192, R2 = 0.7944, n = 32, P < 0.001.

All species (regardless of their trophic specialization) were used to calculate the Shannon index describing species composition: Shannon index of diversity, H0, calculated as H0 = Σ(pi * ln(pi)), where pi is the proportion of the total number of captured individuals of species i.

The differences between means were tested by t-test or, when the normality test failed, by the Mann-Whitney (MW) test. To test for the difference in species occurrence in the outskirts vs. centers, a t-test was used for paired values, where the response variable was characteristic (i) (in angular transformation). The relationship between variables was fitted by a linear regression of y = ax + b. All calculations were performed using SigmaStat 3.5 software (Systat Software Inc, 2006).

Figure 3. The difference in abundance (number of individuals per 100 sweeps transformed as z scores) of Adalia decempunctata in the outskirts and in the center (PMW = 0.050, U = 11931.000). The graph plots the median and the 10th, 25th, 75th, and 90th percentiles as vertical boxes with error bars and outliers (dots).

Communities of coccinellids from the outskirts were richer in species (containing 20 species) than communities from the center (13 species). The presence of species in the communities of both areas (characteristic i) differed significantly [t(paired values) = 2,513, n = 21, P < 0.05]. The species diversity of communities in the outskirts was higher than that in the center. Expressed as the Shannon index (H0), the differences were significant in individual months except during May (Figure 4) and over the entire vegetative season (Nsmall = 180, Nbig = 324, U = 41907.000, PMW < 0.001). In the center, A. decempunctata and C. septempunctata significantly dominated the other species (Table 1). 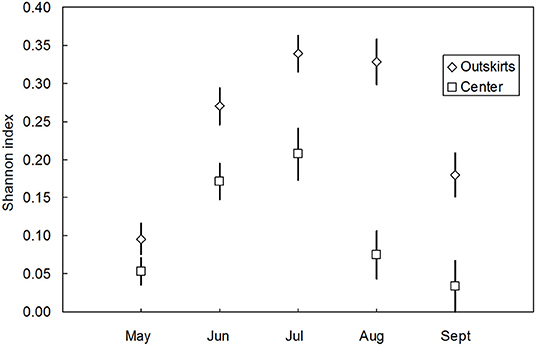 The urban area (center), compared to outskirts, appears at first glance as an environment hostile to coccinellids. This is especially true in agglomerations where most of the area of the center is impervious, covered with buildings or paved roads, and without urban green spaces. However, some cities, including Prague, are less hostile to coccinellids because of continuous green spaces (parks, gardens) and tree lines planted on the impervious surfaces of the streets. Coccinellids live in these small areas of urban green spaces, often in high concentrations (Honek et al., 2017; Rocha et al., 2018). A factor that positively affects the aggregation of coccinellids in the city is the restriction of urban green areas to small areas, whereas populations outside the city would be evenly scattered over a large area instead of being concentrated. The urban environment per se may favorably affect the living conditions of coccinellids. One positive effect may be the temperate microclimate of the center and the smaller difference between day and night temperatures in the urban area than in the outskirts (Bonan, 2002). Additionally, the aphid abundance in urban tree stands may be higher than that in stands growing in the country, probably due to stress, which makes host trees less resistant to aphids (Fluckiger and Braun, 1999; Mackos-Iwaszko et al., 2015).

The mechanism of the effects of urbanization on the abundance of native coccinellids can only be speculated. If there is a regular dispersion of native species from the outskirts to the center, then the absence or low frequency of some species may be caused by spatial isolation of Tilia stands in the center and the distance from source populations of native coccinellid species in the outskirts. Dispersions that manifested in the center of Prague were observed in C. septempunctata. In the 1980s, they occurred regularly in late July when the adults flew to hibernation sites after the end of the period of mass reproduction in crop fields (Honek, 1989). Significant flight activity was also found in A. bipunctata, A. decempunctata, and H. quadripunctata (Honek, 1977), but its causes, timing, duration, and distance were not established.

It can be concluded that the urban environment negatively affected coccinellid communities. The negative effect manifested even though the Prague agglomeration is relatively small (~1 million inhabitants) and, in the center, impervious surfaces take only approximately three quarters of the surface area. To evaluate the impact of urbanization on coccinellid communities in general, it is necessary to gather more data on cities that have different sizes and different proportions of built-up areas than those in the center of Prague.

JS and AH designed the experiments, collected data, analyzed the data, and performed the statistical analyses. ZM coordinate all work. All authors wrote and edited the manuscript.

We thank Ms. Helena Uhlířová, Jana Kohoutová, and Hana Smutná for their excellent technical assistance. We thank also Ing. Kateřina Křížová for her help with upgrade of the map (Figure 1).

Hodek, I., van Emden, H. F., and Honek, A. (2012). Ecology and Behaviour of the Ladybird Beetles (Coccinellidae). Chichester: Wiley-Blackwell.

Copyright © 2021 Skuhrovec, Honek and Martinkova. This is an open-access article distributed under the terms of the Creative Commons Attribution License (CC BY). The use, distribution or reproduction in other forums is permitted, provided the original author(s) and the copyright owner(s) are credited and that the original publication in this journal is cited, in accordance with accepted academic practice. No use, distribution or reproduction is permitted which does not comply with these terms.

Ladybirds: Conservation, Ecology and Interactions with Other Organisms