Parallels between spacing effects during behavioral and cellular learning

Repeated learning improves memory. Temporally distributed (“spaced”) learning can be twice as efficient than massed learning. Importantly, learning success is a non-monotonic maximum function of the spacing interval between learning units. Further optimal spacing intervals seem to exist at different time scales from seconds to days. We briefly review the current state of knowledge about this “spacing effect” and then discuss very similar but so far little noticed spacing patterns during a form of synaptic plasticity at the cellular level, called long term potentiation (LTP). The optimization of learning is highly relevant for all of us. It may be realized easily with appropriate spacing. In our view, the generality of the spacing effect points to basic mechanisms worth for coordinated research on the different levels of complexity.

Our ability to store information and to use it in a reflexive way is essential for the successful interaction with our environment. Understanding the mechanisms underlying learning and memory is a central goal in cognitive and neurosciences. A promising strategy in this direction may be to study parameters that optimize learning and memory.

Increasing the number of learning repetitions (e.g., memorizing vocabularies more often) improves memory, which is well known. Less well known may be, however, that massed learning is less efficient than spaced learning: two spaced learning sessions can be twice as efficient as two learning sessions without spacing (“massed” sessions). This means that the same amount of learning time can be twice as efficient if executed with the optimal spacing schedule. This phenomenon is called the “spacing effect”. As early as 1885 the German psychologist Herrmann Ebbinghaus observed in one of his numerous memory experiments that 38 learning repetitions distributed over three days resulted in the same memory performance as with 68 massed repetitions (Ebbinghaus, 1913). “Spacing interval” can mean the time without mental engagement between two presentations of the learning content. In principle, the learner can use this time to rehearse the learning content mentally. Alternatively, the spacing interval can be filled with different learning contents and quantified by their number.

Generality of the Spacing Effect

Spacing effects have been found with a variety of test paradigms including free recall, cued recall, and recognition memory (however see Litman and Davachi, 2010), and for a multitude of learning materials, like sense and nonsense syllables, words, word pairs (e.g., vocabulary learning), pictures, arithmetic rules, scientific, and mathematical concepts, or scientific terms (e.g., Ebbinghaus, 1913; Dempster, 1996). Spacing effects occur with multimodal (auditory and visual) stimulation (Janiszewski et al., 2003), with intentional, and also with incidental learning (e.g., Challis, 1993; Toppino et al., 2002). The spacing effect is observed from 4-year-old children (Rea and Modigliani, 1987) up to 76 year old seniors (Balota et al., 1989; Toppino, 1991). It has been also observed in animals such as rodents (Lattal, 1999), Aplysia (Mauelshagen et al., 1998), and even within Drosophila (Yin et al., 1995). Due to this universality, the mechanisms underlying the spacing effect are assumed to be basic and highly automatic (Rea and Modigliani, 1987; Toppino, 1991; Dempster, 1996).

Increasing the spacing interval, i.e., the time between learning repetitions (Figure 1A, Melton, 1970; Toppino and Bloom, 2002; Kahana and Howard, 2005) improves memory performance. However, it turns out that this effect is non-monotonic: After a certain optimal spacing interval, memory performance declines again (Donovan and Radosevich, 1999; Toppino and Bloom, 2002; Cepeda et al., 2009). 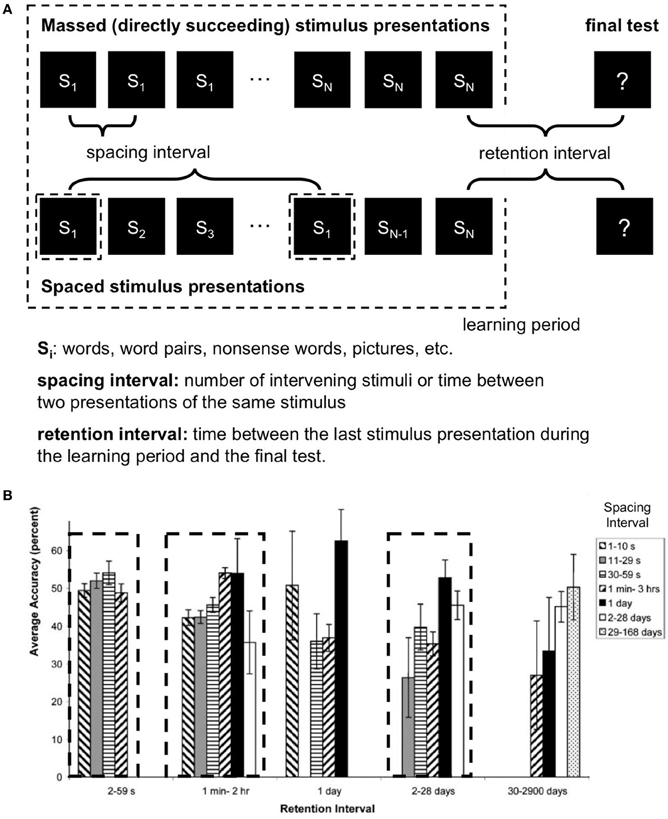 Of note, another so far little noted finding is the wide range of spacing intervals from seconds to months (Cepeda et al., 2006). As Cepeda et al. (2006) nicely summarized, there is an interaction between spacing interval and retention interval, suggesting more than one optimal pair of spacing—and retention-values. Thus, a 3D-representation of the dimensions spacing interval, retention interval and memory performance seems to contain several maxima at different time scales (Figure 1B for a 2D visualization of the 3D parameter space).

Most models for the spacing effect are exclusively cognitive without addressing neurobiological aspects (for overviews see Dempster, 1996; Cepeda et al., 2006). In the present opinion paper we want to direct attention to significant parallels between findings at the cognitive level about spacing effects and related findings at the cellular level with synaptic plasticity.

There is a common agreement that learning and memory are neurally implemented by synaptic plasticity, i.e., a change of synaptic strength, resulting in an enhancement or a reduction of signal transmission between two neurons. Two most often discussed mechanisms of synaptic plasticity are long-term potentiation (LTP) and long-term depression (LTD).

LTP is an enhancement of a chemical synapse between two neurons, lasting from minutes to months or longer. It is typically induced by high frequency stimulation (“HFS”) or by stimulation protocols with simultaneous pre- and postsynaptic neural stimulation (e.g., Cooke and Bliss, 2006). After LTP induction less presynaptic activity is necessary to induce postsynaptic action potentials than before, i.e., the flow of information via this specific synapse is facilitated significantly.

LTP has been found in animal cell slices (e.g., Lynch, 2003), in nearly all areas of the living mammalian brain (Lynch, 2004), including humans and human cell slices (Cooke and Bliss, 2006). LTP is found in different areas of the brain, like amygdala (Clugnet and LeDoux, 1990), hippocampus, cerebellum, and cortex (e.g., Malenka and Bear, 2004). Detailed LTP mechanisms differ between brain areas in a number of factors, like the contributing neurotransmitters, the intracellular molecular mechanisms and/or contributing membrane receptors, etc. (Malenka and Bear, 2004).

LTP 1 has decay times in the order of hours. It is independent of protein synthesis and relies on phosphorylation of synaptic receptors, on the variation of their number (e.g., Malenka and Bear, 2004), and on the alternation of intrinsic properties of their ligand-gated ion channels.
LTP 2 has a decay time in the order of days. It seems to rely on new syntheses (translation) of dendritic proteins from pre-existing messenger RNA.
LTP 3 has a decay time in the order of months. It relies on altered gene transcription and production of new proteins. Structural changes to the shape of existing synapses and the generation of new synapses were observed.

Most important for any type of stimulation protocol is, that a certain level of postsynaptic depolarisation (excitatory postsynaptic polarisation, “EPSP”) has to be reached for LTP induction. Which LTP phase will be attained depends on the stimulation protocol. Typically, HFS protocols were used: Trains of 50–100 electrical pulses with a typical frequency of 100 Hz for a certain time interval (e.g., 1 s) are applied repetitive with spacing intervals without stimulation in between. Spacing intervals differ between studies (from 0.5 s to 10 min or even longer, e.g., Albensi et al., 2007).

In summary, the number of pulses, their frequency, the number of stimulation units, their duration and the duration of the spacing intervals between units can differ between studies and seem to be differentially efficient in both cellular LTP and behavioral learning. A number of similarities between LTP and learning on the behavioral level point to a possible aetiological association and are listed in Table 1.

Table 1. Parallels between Spacing-Effects and LTP.

Successful learning depends on several factors. Highly important are (1) the number of learning units and (2) the temporal distance (spacing intervals) between learning units (amongst other factors). The universality of the behavioral spacing effects and the parallels to spacing effects at the LTP level indicate that basic learning mechanisms are at work. Clearly LTP takes place at the level of synapses and molecules, whereas most findings form the spacing literature are from a complex behavioral/system level. Further, we do not know whether LTP induced by spaced stimulations directly contributes to the improved long-term memory seen after spaced studying at the behavioral level. However, the patterns described above suggest an intriguing correlation between synaptic and cognitive processes, worth to be investigated further. Comparison of optimal spacing values for learning tasks from different levels of cognition with optimal spacing intervals between LTP stimulation units may further elucidate the interrelation between low and high level learning in a systematic manner. Related results may help to deepen our understanding of basic learning mechanisms on one hand and provide simple, efficient, and universally applicable learning rules on the other hand.

Thanks for helpful comments and corrections to Harald Atmanspacher and Michael Bach.

Clugnet, M. C., and LeDoux, J. E. (1990). Synaptic plasticity in fear conditioning circuits: induction of LTP in the lateral nucleus of the amygdala by stimulation of the medial geniculate body. J. Neurosci. 10, 2818–2824.

Copyright © 2012 Kornmeier and Sosic-Vasic. This is an open-access article distributed under the terms of the Creative Commons Attribution License, which permits use, distribution and reproduction in other forums, provided the original authors and source are credited and subject to any copyright notices concerning any third-party graphics etc.