Mathematics is a complex subject including different domains such as arithmetic, arithmetic problem solving, geometry, algebra, probability, statistics, calculus, … that implies mobilizing a variety of basic abilities associated with the sense of quantity, symbols decoding, memory, visuospatial capacity, logics, to name a few. Students with difficulties in any of the these abilities or in their coordination, may experience mathematical learning difficulties. Understanding the cognitive nature of the various mathematical domains, as well as the mechanisms mediating cognitive development, has fascinated researchers from different fields: from mathematics education to developmental and cognitive psychology and neuroscience.

The field of cognitive psychology has a long history in the studies of cognitive difficulties involved in developing the representation and learning general use of numbers in mathematics (e.g., Campbell, 2005). However, as Fletcher et al. (2007) note, there are “no consistent standards by which to judge the presence or absence of LDs [learning difficulties] in math” (p. 207), and there is still disagreement concerning the question of a definition, operational criteria, and prevalence (Lanfranchi et al., 2008; Mazzocco, 2008). In general, the term Mathematical Learning Difficulty (MLD) is used broadly to describe a wide variety of deficits in math skills, typically pertaining the domains of arithmetic and arithmetic problem solving. We will use MLDs to refer to learning difficulties in these domains as well as other mathematical domains like the ones mentioned above.

Within the field of mathematics education, many frameworks and theories have been developed to analyze teaching and learning processes and difficulties involved with these and other mathematical tasks (e.g., Freudenthal, 1991; Schoenfeld, 1992, 2011; Bharath and English, 2010). Recently, the field has shown interest in perspectives from cognitive neuroscience (e.g., Grabner and Ansari, 2010).

Although developmental and classification models in these fields have been developed (for example, Geary and Hoard, 2005; Desoete, 2007; von Aster and Shalev, 2007), to our knowledge, no single framework or model can be used for a comprehensive and fine interpretation of students' mathematical difficulties, not only for scientific purposes, but also for informing mathematics educators. As mathematics educators1, we believe that reaching a model that combines existing hypotheses on MLD, based on known cognitive processes and mechanisms, could be used to provide a mathematical profile for every student.

Our aims with this contribution are to: (1) provide an overview of the most relevant hypotheses in the present day's literature regarding possible deficits that lead to MLD and of possible classifications of MLD subtypes; (2) and to build on such literature, using a multi-deficit neurocognitive approach, to propose a classification model for MLD describing four basic cognitive domains within which specific deficits may reside.

In order to reach our first objective we will describe the current hypotheses on neurocognitive deficits that may lead to MLD specifically related to numbers, and then we will provide examples of the most relevant classifications of MLD, based on a possible deficit in basic cognitive functions.

Hypotheses for Difficulties in the Learning of Numbers

Certainly deficits that lead to difficulties in processing numbers are of primary importance among the hypotheses for MLD. The literature refers to two preverbal or non-symbolic systems for processing quantities: (1) the object tracking system (OTS) that is precise, limited by its absolute set size, and that creates an object file with concrete information for each objects observed simultaneously (Brannon and Roitman, 2003; Xu, 2003; Fayol and Seron, 2005; van Herwegen et al., 2008; Cordes and Brannon, 2009; Cantlon et al., 2010; Piazza, 2010); (2) the approximate number system (ANS) that is extensible to very large quantities, operates on continuous dimensions, and yields and approximate evaluation in accordance with Weber's law (Xu and Spelke, 2000; Mix et al., 2002; Halberda and Feigenson, 2008; Piazza, 2010).

The main hypotheses based on deficits in these systems and other mechanisms specific to numerical processing have been reviewed by Andersson and Östergren (2012), and classified into the following categories:

Classifications of MLD and the Hypothesis of Domain General Cognitive Deficit

As noted in the introduction, acquiring basic mathematical skills requires possessing, building and promoting a range of abilities. The core systems of number, seem to be quite important in understanding the nature of the development of numerical cognition, but these are not the only systems upon which success in mathematics lies. Many researchers have attempted to describe subtypes in MLD (Geary, 1990; Rourke, 1993; Fuchs and Fuchs, 2002; Geary, 2004; Geary and Hoard, 2005). Geary was one of the first who tried to connect “Mathematics Disorder” with neuropsychological deficits (Geary, 1994). He posited three key subtypes of deficits (confirmed in Geary and Hoard, 2005):

In general, Geary's classification and the others proposed in the literature (for a review see: Desoete, 2004, 2007; Stock et al., 2006) lead to the identification of the 3 subtypes listed, as well as, one based on a number knowledge deficit. However such classifications are not completely satisfactory because in general the profiles of the children met in practice do not appear to belong to any subtype, but instead be constituted of several characteristics pertaining different subtypes (Desoete, 2007).

We believe this to be the case, because the subtypes are not characterized by basic cognitive processes, such as working memory (WM), long term memory (semantic memory), executive functions, fact retrieval and, by extension, calculation and fluency. Together with the existing hypotheses of domain specific deficits in number processing that we have presented in section Hypotheses for Difficulties in the Learning of Numbers, we support an additional hypothesis of a domain general cognitive deficit underlying MLD (Geary, 2004; Geary and Hoard, 2005), which emanates from converging evidence showing that such cognitive functions are involved in mathematical performance in both adults and children (Fuchs et al., 2005; Andersson, 2007, 2008; Swanson et al., 2008).

Taking into account the literature presented as well as unpublished clinical observations, we propose a classification model for MLD (Table 1) describing four basic cognitive domains within which specific deficits may reside. For each subtype we also list specific systems involved and typical mathematical difficulties. 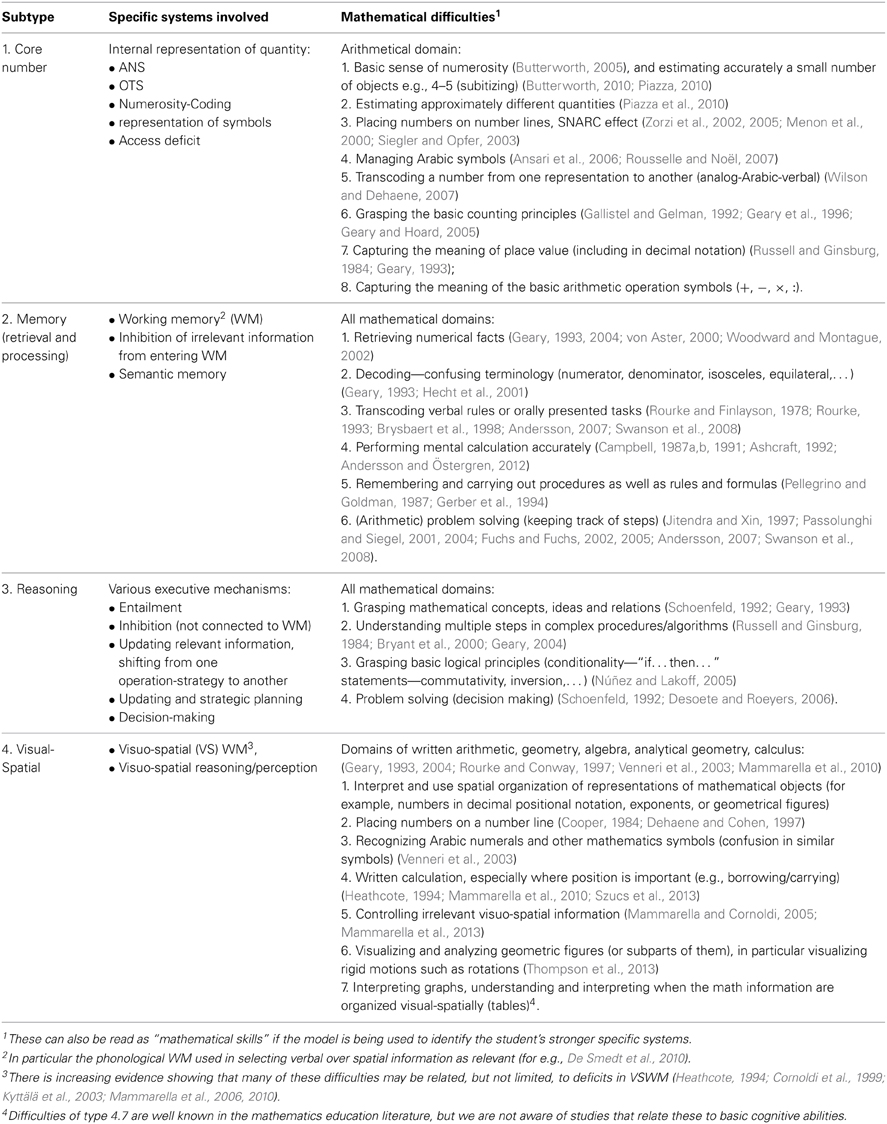 An analysis of a student's performance on a set of well-designed tasks can lead to the singling out of specific areas of difficulty (and strength), by comparing the specific systems and difficulties implied in each incorrect (or correct) answer to the tasks. The student's profile will be then described as a single subtype or as a combination of subtypes in which types of mathematical tasks and possible deficits to specific systems are highlighted.

We conclude highlighting the innovative value of the present etiological model. First, we may refer to it as being multidimensional in that it proposes a transition from the one-dimensional “Dyscalculia” to the multidimensional “Mathematical Learning Difficulties,” bringing into the picture mathematical domains other than the ones typically considered by the MLD literature until today. This leads to the second important feature: the model has direct implications for the field of mathematics education and may become an important tool for educators involved both in primary or secondary education. This is because the model allows to identify mathematical profiles of students early on, and these can be used to design more effective and comprehensive intervention programs, focusing on the students' strengths to compensate weaknesses and provide motivation. In fact, we believe, that in general intervention should focus mostly on the students' strengths, because this can have positive effects on motivation, while attempts to address students' weaknesses directly are likely to contribute to de-motivation and further failures. Moreover, educators, from researchers to teachers, can use the model to easily create tasks for working with their students.

Finally, the suggested classification model of MLD is expected to be clinically useful, as has been observed during a first study of its validity, the results of which will be soon submitted for publication. However we note that the model is at an early phase of development, and it can and will be improved through further research.

Mazzocco, M. M. (2008). “Defining and differentiating mathematical learning disabilities and difficulties,” in Why Is Math So Hard for Some Children? The Nature and Origins of Mathematical Learning Difficulties and Disabilities, eds D. B. Berch and M. M. Mazzocco (Baltimore, MD: Brookes Publishing Company), 29–47.

Schoenfeld, A. (1992). “Learning to think mathematically: problem solving, metacognition, and sense making in mathematics,” in Handbook of Research on Mathematics Teaching and Learning, eds D. A. Grouws and the NCTM (New York, NY: Maxwell Macmillan International), 334–370.

Schoenfeld, A. (2011). How We Think: A Theory of Goal-Oriented Decision Making and its Educational Applications. New York, NY: Routledge.

Copyright © 2014 Karagiannakis, Baccaglini-Frank and Papadatos. This is an open-access article distributed under the terms of the Creative Commons Attribution License (CC BY). The use, distribution or reproduction in other forums is permitted, provided the original author(s) or licensor are credited and that the original publication in this journal is cited, in accordance with accepted academic practice. No use, distribution or reproduction is permitted which does not comply with these terms.

Perspectives in Neuroscience of Special Education