Primary motor cortex (M1) excitability can be assessed using transcranial magnetic stimulation (TMS) and can be modulated by a conditioning electrical stimulus delivered to a peripheral nerve prior to TMS. This is known as afferent facilitation (AF). The aim of this study was to determine whether AF can be induced by digital nerve stimulation and to evaluate the relation between the interstimulus interval (ISI) required for AF and the latency of the E2 component of the cutaneomuscular reflex (CMR) and the prominent somatosensory evoked field (SEF) deflection that occurs approximately 70 ms after digital nerve stimulation (P60m). Stimulation of the digital nerve of the right index finger was followed, at various time intervals, by single-pulse TMS applied to the contralateral hemisphere. The ISI between digital nerve stimulation and TMS was 20, 30, 40, 50, 60, 70, 80, 100, 140, 180, 200, or 220 ms. Single-pulse TMS was performed alone as a control. SEFs were recorded following digital nerve stimulation of the index finger, and the equivalent current dipole of prominent deflections that occurred around 70 ms after the stimulation was calculated. CMRs were recorded following digital nerve stimulation during muscle contraction. Motor evoked potentials (MEPs) were facilitated at an ISI between 50 and 100 ms in 11 of 13 subjects, and the facilitated MEP amplitude was larger than the unconditioned MEP amplitude (p < 0.01). There was no significant correlation between the ISI at which AF was maximal and the latency of the P60m component of the SEF (r = −0.50, p = 0.12) or the E2 component of the CMR (r = −0.54, p = 0.88). These results indicate that the precise ISI required for AF cannot be predicted using SEF or CMR.

Digital nerve stimulation during voluntary muscle contraction can induce successive periods of facilitation and inhibition of electromyographic (EMG) activity in the contracting muscle (Caccia et al., 1973; Jenner and Stephens, 1982; Maertens de Noordhout et al., 1992; Ridding and Rothwell, 1999). This cutaneous reflex can be measured stably and is known as the cutaneomuscular reflex (CMR). The CMR consists of an early period of facilitation (E1, 30–40 ms) followed by a period of inhibition (I1, 40–50 ms) and a later, more prominent facilitation (E2, 50–80 ms). The E2 component of the CMR is believed to involve a transcortical pathway, and lesion data support this hypothesis (Jenner and Stephens, 1982). During the early phase of the E2 component, while EMG activity is increased, MEPs elicited by TMS are suppressed (Maertens de Noordhout et al., 1992). However, when TMS is applied at the peak of the E2 component, the MEP amplitude is enhanced (Maertens de Noordhout et al., 1992). Although these studies suggest that digital nerve stimulation enhances M1 excitability, the relation between the latency of the peak of the E2 component of the CMR that is induced by digital nerve stimulation during muscle contraction and the ISI required to evoke AF that is induced by digital nerve stimulation under resting conditions is unclear.

We aimed to determine whether AF could be induced by digital nerve stimulation and to evaluate the relation between the ISI required for AF and the latency of the E2 component of the CMR and the P60m component of the SEF.

Thirteen healthy, right-handed volunteers [age range, 22–29 years; mean ± standard deviation (SD) age, 23.5 ± 3.2 years] participated in this study. All subjects gave written informed consent. This study was approved by the ethics committee of Niigata University of Health and Welfare and conducted in accordance with the Declaration of Helsinki.

Monophasic-pulse TMS was delivered with a figure-of-eight-shaped coil (diameter, 95 mm) connected to a Magstim 200 (Magstim, Dyfed, UK). The coil was held with the handle pointing backward and laterally at approximately 45° to the sagittal plane. The optimal spot to elicit MEPs was carefully determined in each subject as the point where TMS consistently resulted in a large MEP in the right FDI, and the optimal coil position to evoke a stable MEP was marked on a cap worn by the subject (Miyaguchi et al., 2013). The TMS intensity used was the lowest stimulus intensity that induced an MEP with a peak-to-peak amplitude exceeding 1 mV in the relaxed FDI in at least 5 of 10 consecutive trials (Chen et al., 1999; Ridding and Rothwell, 1999).

Figure 1. Experimental protocol. The interstimulus interval (ISI) between digital nerve stimulation and transcranial magnetic stimulation (TMS) was 20, 30, 40, 50, 60, 70, 80, 100, 140, 180, 200, or 220 ms. Single-pulse TMS was delivered alone (without a conditioning stimulus) as a control. RMT_1 mV; the lowest stimulus intensity that induced an motor evoked potential (MEP) with a peak-to-peak amplitude exceeding 1 mV.

Subjects were seated comfortably inside a magnetically shielded room (Tokin Ltd., Sendai, Japan) with their head firmly positioned inside a 306-channel whole-head magnetoencephalography (MEG) system (Vectorview; Elekta, Helsinki, Finland). This device consists of 204 planar-type, first-order gradiometers arranged as 102 pairs and 102 magnetometers. This configuration of gradiometers specifically detects the signal immediately above the source current. Continuous MEG signals were sampled at 1000 Hz using a band-pass filter between 0.03 and 330 Hz. To elicit SEFs, the right index finger was electrically stimulated using a pair of ring electrodes with a monophasic square-wave impulse of 0.2-ms duration at 0.5 Hz (Neuropack ∑ Nihon Kohden, Tokyo, Japan) in consideration of subject fatigue. The intensity of electrical stimulation was three times the perceptual sensory threshold. MEG data were obtained from 50 ms before to 200 ms after the stimulation, and a total of 200 epochs were averaged to identify the SEF. To analyze SEFs, the band-pass filter was set between 0.5 and 100 Hz and the 20-ms period of data preceding the stimulus was used as the baseline. Source Modeling software (Elekta, Helsinki, Finland) was used to estimate the time course of source activities. The sources of the components of interest in the SEFs were estimated as the equivalent current dipoles using a least-squares search using a subset of 16–18 channels over the area with the largest response.

To record CMRs, the right index finger was electrically stimulated at three times the perceptual sensory threshold at 0.2 Hz during isometric contraction of the FDI muscle at 5% of the EMG maximum (Maertens de Noordhout et al., 1992; Ridding and Rothwell, 1999; Ridding et al., 2005). EMG data were rectified and averaged following 250 stimuli. Electrical stimulation is usually delivered at 3 Hz to record CMRs (Jenner and Stephens, 1982; Ridding and Rothwell, 1999; Ridding et al., 2005). However, we used 0.2 Hz to match the frequency of electrical stimulation used for afferent inhibition and AF measurements.

Table 1. Summary of the study protocol.

In afferent inhibition and AF measurements, the mean ± SD intensity of TMS was 49.7 ± 7.2% of the maximum stimulator output. Figure 2 shows the waveforms of the conditioned MEPs elicited at each ISI in one subject. 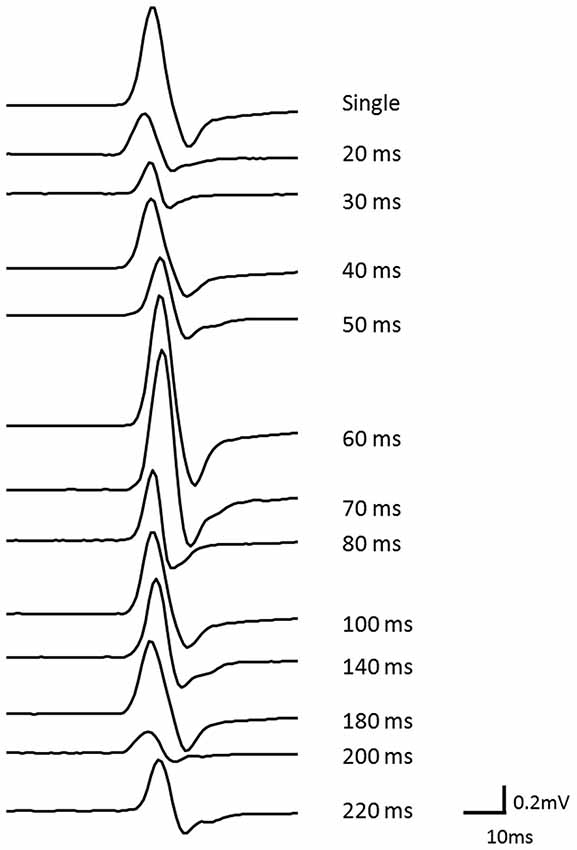 Effects of ISI on MEP Amplitude 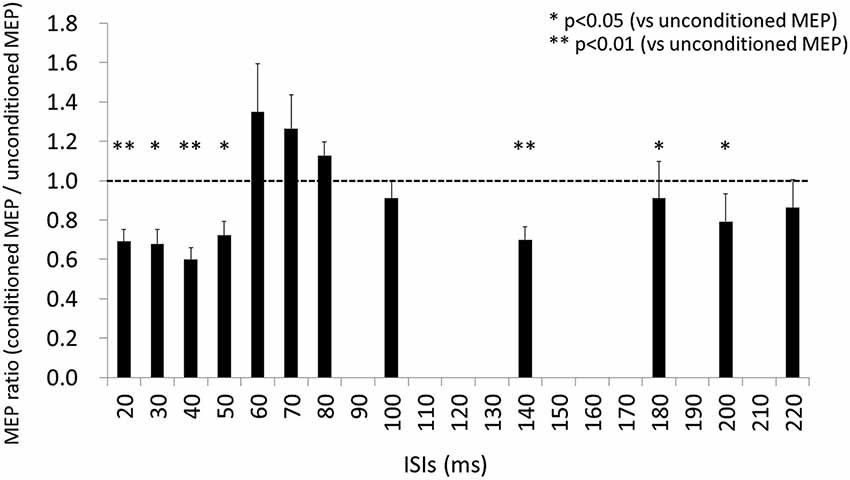 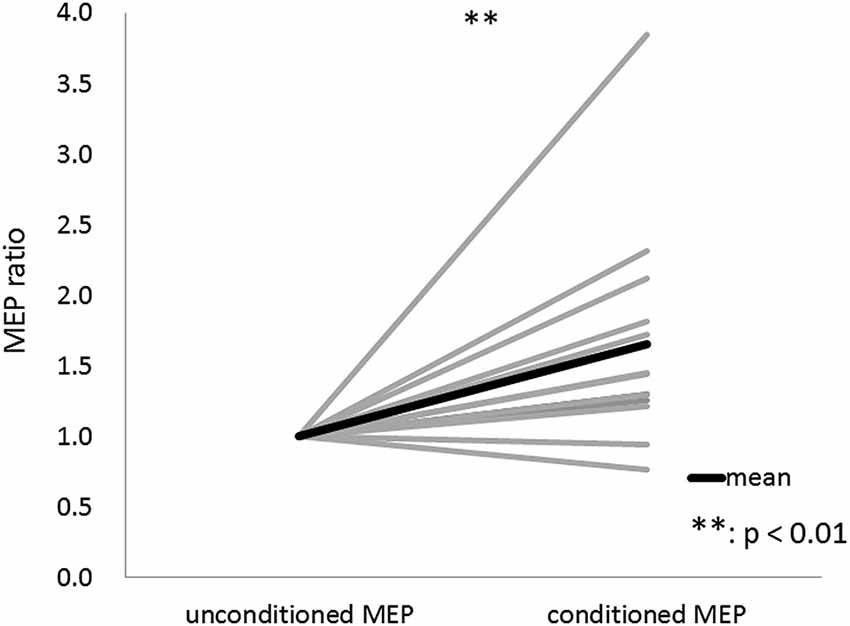 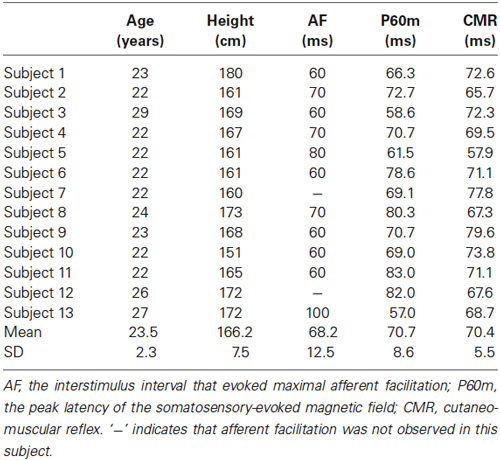 Relation Between AF and SEF

Relation Between AF and CMR

Figure 6A shows the waveform of CMRs evoked by digital nerve stimulation during muscle contraction in one subject. This waveform consisted of early excitation (E1), inhibition (I1), and secondary excitation (E2). The mean ± SD latency of the peak of the E2 component was 70.4 ± 5.5 ms (Table 2) and the latency was not significantly correlated with the ISI at which AF was maximal (r = −0.54, p = 0.88; Figure 6B).

The equivalent current dipole of N20 or N20m following digital nerve stimulation has been estimated to occur in Brodmann area 3b of the primary sensory cortex (Forss et al., 1995; Kimura et al., 1999; Inui et al., 2003), and P60m reflects activation of Brodmann area 1 or 2 (Huttunen et al., 2006) or an inhibitory postsynaptic potential in Brodmann area 3 (Wikström et al., 1996). However, there is little direct information regarding the origin of P60m. Brodmann areas 1 and 2 have direct projections to Brodmann area 4 (Strick and Preston, 1978; Jones et al., 1979). If P60m reflects the activity of Brodmann areas 1 and 2, we then hypothesize that activation of these areas would either increase or decrease the excitability of Brodmann area 4. However, no significant correlation was observed between the latency of the P60m peak and the ISI that evoked maximal AF. These results indicate that the precise ISI required for AF is unpredictable before AF is used in an experiment.

We investigated AF in 10-ms intervals to avoid fatiguing the subjects, but SEF and CMR latencies are defined with millisecond accuracy (Table 1). This difference in resolution is one of the limitations of this study. In future experiments we plan to probe AF in 1-ms intervals.

Copyright © 2014 Kojima, Onishi, Sugawara, Miyaguchi, Kirimoto, Tamaki, Shirozu and Kameyama. This is an open-access article distributed under the terms of the Creative Commons Attribution License (CC BY). The use, distribution and reproduction in other forums is permitted, provided the original author(s) or licensor are credited and that the original publication in this journal is cited, in accordance with accepted academic practice. No use, distribution or reproduction is permitted which does not comply with these terms.