Saccadic adaptation is the motor learning process that keeps saccade amplitudes on target. This process is eye position specific: amplitude adaptation that is induced for a saccade at one particular location in the visual field transfers incompletely to saccades at other locations. In our current study, we investigated wether this eye position signal corresponds to the initial or to the final eye position of the saccade. Each case would have different implications on the mechanisms of adaptation. The initial eye position is not directly available, when the adaptation driving post saccadic error signal is received. On the other hand the final eye position signal is not available, when the motor command for the saccade is calculated. In six human subjects we adapted a saccade of 15 degree amplitude that started at a constant position. We then measured the transfer of adaptation to test saccades of 10 and 20 degree amplitude. In each case we compared test saccades that matched the start position of the adapted saccade to those that matched the target of the adapted saccade. We found significantly more transfer of adaptation to test saccades with the same start position than to test saccades with the same target position. The results indicate that saccadic adaptation is specific to the initial eye position. This is consistent with a previously proposed effect of gain field modulated input from areas like the frontal eye field, the lateral intraparietal area and the superior colliculus into the cerebellar adaptation circuitry.

Saccades are fast eye movements which shift the retinal area of highest receptor density, the fovea, from one point of interest to another one. These movements are so fast that visual feedback can not be fully processed while the gaze is in flight. Therefore, the motor signal that steers the movements has to be prepared well in advance. Due to alterations in the oculomotor plant by growing or aging or due to a changed response behavior of the plant by muscle fatigue a fixed motor command would lead to dysmetric saccades after some time. For this reason, the motor signal steering the movement is continuously adjusted. This motor learning can be induced in the laboratory employing the McLaughlin paradigm (McLaughlin, 1967). Using eye tracking devices the target is shifted while the saccade is in mid flight. The error signal that drives the adaptation is the post-saccadic error signal, the distance between the detected target position on the retina and the expected target position (Wong and Shelhamer, 2011; Collins and Wallman, 2012; see Herman et al., 2013 for a review).

For eye movement recording and analysis we used the EyeLink1000 system (SR research). The right eye was recorded in every subject with 1k Hz sampling rate. Start and end of saccades were tagged when eye velocity exceeded or went below a threshold of 30 deg/s and acceleration exceeded or fell below a threshold of 8000 deg/s2. For stimulus presentation and data analysis we used MATLAB with the psychtoolbox extension (Brainard, 1997). The experiment was performed in accordance with the principals and ethical standards laid down in the 1964 Declaration of Helsinki and approved by the local ethics committee. 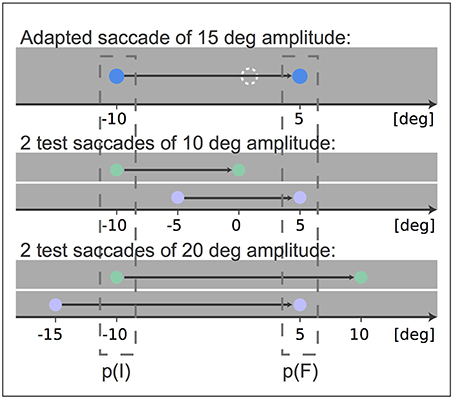 We used the pre-adaptation trials and the post-adaptation test trials of each saccade type to calculate the mean baseline amplitude Apre and the mean post-adaptation amplitude Apost, respectively. We excluded trials from the analysis in which the saccade was started in the time interval of 0–90 ms after target presentation and we excluded trials in which the executed saccade had an amplitude of less than 3.5 degree. That occurred in less than 1 % of the trials. The amplitude change AC of the adapted 15 degree saccade and the amount of adaptation that was transferred to the four test saccades, two matching the initial eye position p(I) of the 15 degree saccade and the other two matching the final position, p(F), was calculated as following 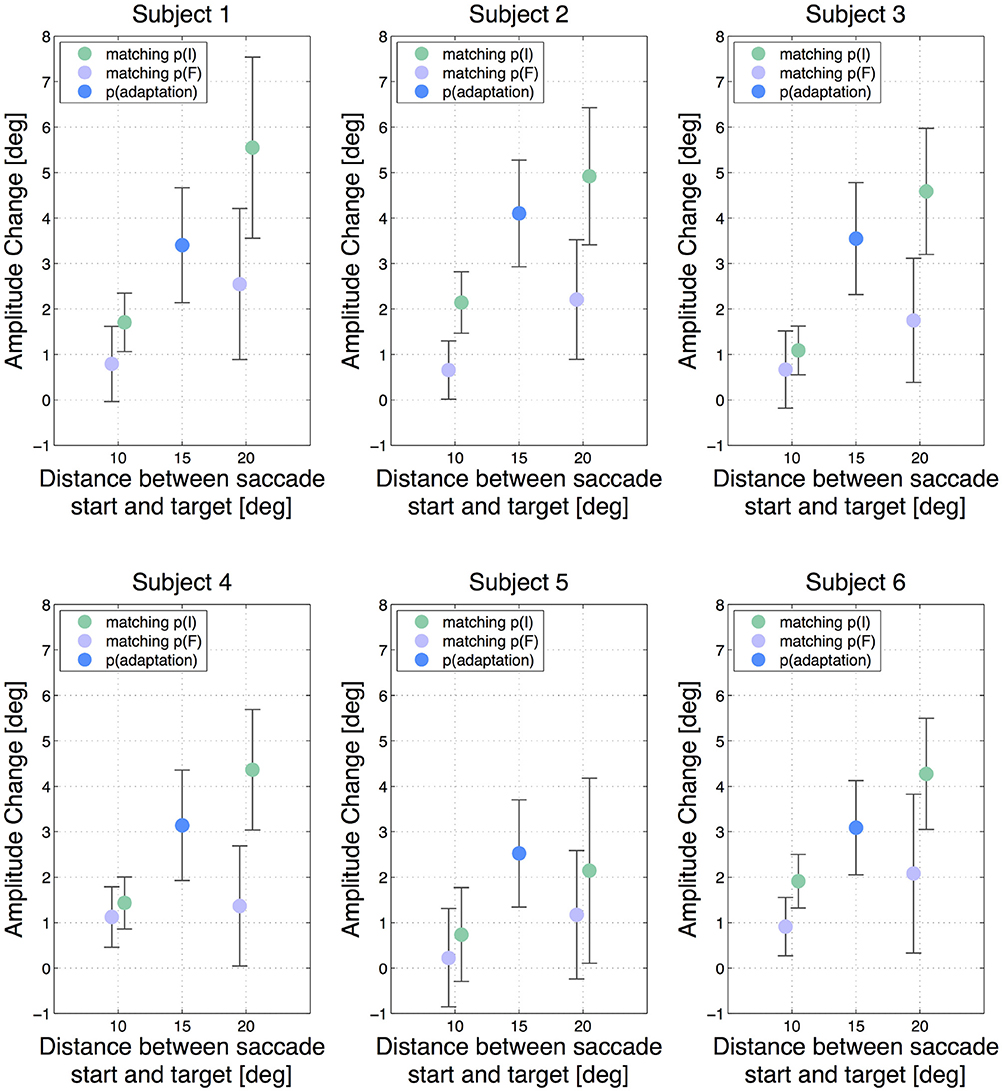 Figure 2. Amplitude changes of all subjects for all 5 saccade types. The error bars show the standard deviations. The blue dot indicates the gain change measured in the adapted 15 degree saccade. The green dots show the gain change in the saccades that had the same initial eye position p(I) as the adapted 15 degree saccade and the purple dots show the results for saccades having the same target position p(F). The horizontal offset between the two 10 degree saccades and the two 20 degree saccades, respectively, has been added manually to improve lucidity. A vertical difference between the green and the purple dots in one test saccade type indicates an offset in adaptation transfer.

Figure 3. Mean results of all six subjects. The error bars show the standard deviations. (A) Averages of amplitude change over the six subjects for all 5 saccade types. The blue dot indicates the gain change measured in the adapted 15 degree saccade (AC15 = 3.3 ± 0.5 degree). The green dots show the gain change in the saccades that had the same initial eye position p(I) like the adapted 15 degree saccade (AC10, p(I) = 1.5 ± 0.5 degree and AC20, p(I) = 4.3 ± 1.2 degree) and the purple dots show the results for saccades matching the final eye position p(F) (AC10, p(F) = 0.7 ± 0.3 degree and AC20, p(F) = 1.9 ± 0.5 degree). The test saccades of 10 degree amplitude show considerably less adaptation than the 20 degree test saccades. Furthermore, the saccades with the same saccade target positions p(F) like the adaptation saccade show significantly less adaptation than the saccades which were started at the same fixation position like the adaptation saccade in the case of the 20 degree saccades as well as in the case of the 10 degree saccades. Again the little horizontal offset has been added manually. (B) The bars present the normalized offset in adaptation state δStype between the test saccades started at p(I) and the test saccades ending at p(F).

In previous studies, we proposed a possible mechanism based on eye position gain fields which may underlie the general eye position specificity in saccadic adaptation (Havermann et al., 2011; Wulff et al., 2012). The configuration of this proposed mechanism might also explain the assignment of the amplitude modification to the initial eye position. The cerebellum is a crucial structure for inward adaptation of reactive saccades (see Pelisson et al., 2010 for a review). Furthermore, in the cerebellum the motor command modifications might be restricted to that neuronal input composition, which was received by the cerebellum during the motor learning (Edelman and Goldberg, 2002). This way a saccade's amplitude is only effectively influenced by prior adaptation if the active input to the cerebellum during the generation of that saccade resembles the active input during the generation of a previously inaccurate, and thus adapted, saccade. On the one hand, the neurons that fire in relation with the generation of a saccade are determined by the saccade amplitude in many brain areas, for example in the superior colliculus, the frontal eye field and the lateral intraparietal area. If now the test saccade has a different amplitude than the adapted saccade, the neuronal input to the cerebellum during saccade generation will also be different. Experiments show that indeed a test saccade with a differing amplitude shows less adaptation than the adapted saccade (Frens and Van Opstal, 1994; Collins et al., 2007; Schnier et al., 2010). On the other hand, the neuronal input composition to the cerebellum is also influenced by gaze direction during saccade generation. This results from the occurrence of so called eye position gain fields, which modulate a neuron's firing rate by the current position of the eye (Andersen and Mountcastle, 1983; Zipser and Andersen, 1988). The neuron then responds to both the retinal target location as well as the current eye position. The eye position modulation has the form that the cell response varies monotonically with the initial eye position in the orbit. Mathematically, the response of a neuron with an eye position gain field modulation can be approximated by the product of a Gaussian function of retinal target position and a sigmoid function of initial eye position (Pouget and Sejnowski, 1997). Neurons with such eye position gain fields occur in several areas of the oculomotor pathway, like in the fastigial nucleus (Fuchs et al., 1993), the nucleus reticularis tegmenti pontis (NRTP) (Crandall and Keller, 1985), the superior colliculus (SC) (Van Opstal et al., 1995; Campos et al., 2006), the lateral intraparietal area (LIP) (Andersen et al., 1990), the frontal eye field (FEF) (Cassanello and Ferrera, 2007), area V3A (Galletti and Battaglini, 1989) and area V6A (Galletti et al., 1995). Hence, the composition of the target command that is received by the cerebellum includes output of areas with gain field modulation like the FEF, LIP, and SC. Thus, if a test saccade has the same start position as the trained adapted saccade, the input to the cerebellum during saccade generation is more similar between test and adaptation saccade as if the initial eye positions differ, due to the gain field modulation. Therefore, the test saccade with the same starting position as the adapted saccade should be influenced to a larger degree by the modification of the motor command during the adaptation. The result we present here is in good accordance with this prediction of the gain field based mechanism of eye position specificity in saccadic adaptation since we found a higher amount of adaptation being transferred to the test saccades with the same starting eye position.

Conception and design of the experiment, data analysis: SG. Interpretation of the data, revising the content, final approval of the version: SG, ML.

This work was supported by the German Science Foundation DFG LA-962/6.

Andersen, R., and Mountcastle, V. B. (1983). The influence of the angle of gaze upon the excitability of the light-sensitive neurons of the posterior parietal cortex. J. Neurosci. 3, 532–548.

Copyright © 2016 Gremmler and Lappe. This is an open-access article distributed under the terms of the Creative Commons Attribution License (CC BY). The use, distribution or reproduction in other forums is permitted, provided the original author(s) or licensor are credited and that the original publication in this journal is cited, in accordance with accepted academic practice. No use, distribution or reproduction is permitted which does not comply with these terms.