Mobile Phone Apps in the Management and Assessment of Mild Cognitive Impairment and/or Mild-to-Moderate Dementia: An Opinion Article on Recent Findings

Due to demographic changes, there has been a growing number of aging population. For example, in Europe older adults, aged 55+ years, form 25% of the whole population (Global AgeWatch Index 2015: Insight report., 2015). This increasing trend in the rise of older population groups brings about serious economic and social changes accompanied with a number of aging diseases such as dementia (Klimova et al., 2015).

At the moment, the prevalence of dementia reaches 58 million people worldwide, however, by 2050 it should triple since each year there are about 9.9 million of new dementia cases (Langa, 2015; WHO dementia, 2016). The key symptom of dementia is the global deterioration of cognitive functions, which is usually progressive and irreversible in nature. Other symptoms of dementia include a considerable loss of memory, orientation problems, impaired communication skills, depression, behavioral changes, and confusion (Craik and Salthouse, 2002; Salthouse, 2012). In addition, people with dementia suffer from behavioral disorders such as apathy, depression, delusions, hallucinations, aggression, irrelevant sexual behavior, or sleeping problems. All these symptoms impose a significant emotional and physical burden not only on the patients themselves, but also on their caregivers who have to look after these patients because they are dependent on their help (Hahn and Andel, 2011). In fact, 80% of the caregivers are family members whose quality of life rapidly declines after taking care of their loved ones suffering from dementia (Alzheimer's Association, 2015).

Nevertheless, in the early phases of dementia patients are still able to take care of themselves by modifying their life styles with little or no additional ongoing support, in which especially the availability and adoption of health-focused mobile phone apps can help both the patients and their caregivers with the self-management of dementia (Archer et al., 2014). Boulos et al. (2014) estimate that there are over 40,000 health-related apps on the market. However, Singh et al. (2016) argue that many mobile apps are not designed to meet the specific needs of patients with dementia and/or their caregivers. This finding has been also confirmed by Conci et al. (2009) who point out that older people are willing to accept and adopt a new technology if it meets their needs and expectations. The main barriers seem to be poor technical knowledge and skills, negative attitudes toward the use of this technology, as well as inaccurate perceptions of people with dementia (Klimova et al., 2016; O'Connor et al., 2016). Furthermore, there is a general lack of clinical trial evidence supporting the use of mobile apps (Singh et al., 2016), as well as interventions focusing on the needs of the dementia cohort of patient (Zhang et al., 2016).

Nevertheless, as Coppola et al. (2013) indicate, through proper training and appropriate strategies, technology can improve the quality of life of people with cognitive disorders. They also claim that mobile apps have the potential to reduce depression and stimulate cognitive functions. The very positive feature of mobile phones is that they do not have any stigma for the individuals who use or wear them (Joe and Demiris, 2013). Thanks to their ubiquitous nature, mobile phones can collect a huge number of various data (e.g., physiological or behavioral) in real time with limited burden on the client. These data can then provide decisions about treatment options and monitoring response (Arean et al., 2016).

Users of mobile phone apps can easily download the software programs to their mobile device with the Internet capability. These programs can be then used in several ways, which can help people with MCI and/or dementia to reduce their cognitive impairments (cf. Vardeh et al., 2013). The programs for the improvement of cognitive disorders in dementia are especially used for tracking wandering people via global posting system (GPS) (Faucounau et al., 2009), scheduling activities of their daily life or appointments at their doctor, or communication (Thorpe et al., 2016). Most of these mobile phone apps work on Android platforms, which allow users to change the sensitivity of the touch interface and can provide a vibration feedback when the screen is touched. Screen protectors can also help decrease glare (Coppola et al., 2013).

Recent Findings on the Use of Mobile Apps for Dementia

Thorpe et al. (2016) explored the adoption of smartphone and smartwatch with six mobile apps (scheduling, navigation, communication, orientation, emergency help, and monitoring) among people with mild dementia. In their study they discovered that the smartphone should be used for input and smartwatch for output, e.g., notifications, orientation, and behavior sensing. The most appreciated function by patients was scheduling which reminded or notified them about the activities they should perform. The navigation or emergency support functions were not considered to be that much useful. The most important aspect for patients with dementia was personalization of both devices, i.e., tailoring the devices to their individual needs. This was in fact confirmed in other research studies as well (Faucounau et al., 2009; Lanza et al., 2014; Leng et al., 2014; Malinowsky et al., 2014). Faucounau et al. (2009) argue that it is a must to involve end-users in the co-design of new technologies in order to develop tailored devices, as well as testing them in a real-world context (Thorpe et al., 2016). Lanza et al. (2014) also point out that familiarization is one of the key aspects in the usability of these devices and apps by patients with dementia since patients with dementia are generally older people and they like to use what they already know. Yamagata and Kowto (2013) or Onoda et al. (2013) emphasize that the touch accuracy for these people might cause a difficulty and therefore technical aspects of the devices should be considered, e.g., weight of device, screen size, or the layout of buttons and taskbar. Thus, if all these features are taken into account, then the person-centered care can be provided as it has been discussed in Leng et al. (2014). Boulos et al. (2014) list the key ingredients necessary for a successful app. These include content quality, usability, need to match the app to consumer's general and health literacy levels, device connectivity standards, security and user privacy.

Furthermore, the findings of the research studies (Onoda and Yamaguchi, 2014; Sangha et al., 2015; Zorluoglu et al., 2015) show evidence that mobile phone apps are effective in cognitive screening and the assessment and diagnosis of dementia. The potential of mobile apps for the diagnosis and assessment of dementia is that these apps are more accurate than the traditional, manual testing; they are easily administered and understood by older people; some can be self-administered (cf. Onoda and Yamaguchi, 2014); they save time; they can minimize the examiner's biases; early diagnosis enables patients to stay independent on their tasks of daily living; they may cut potential costs on treatment and hospitalization; they target to improve the overall quality of life of older individuals; and they are ecological (cf. Klimova et al., 2017). For example, Onoda and Yamaguchi (2014) reported that their CADi2 had high sensitivity (0.85–0.96) and specificity (0.81–0.93) and were comparable with traditional neuropsychological tests such as MMSE or VTF. The same is true for Zorluoglu et al. (2015) study in which the findings of MCS and MoCA tests were compared, and the scores of individuals from these tests were correlated (r2 = 0.57). These results are also in compliance with Allard et al. (2014) who maintain that traditional devices are often not capable to detect sensitive declines in cognitive functions due to natural variation at the time of testing. In addition, mobile devices can provide repeated and reliable assessments of cognitive functions.

Table 1 below then summarizes the principal benefits and limitations of the use of mobile phone apps in the management and assessment of MCI and/or mild-to-moderate dementia. 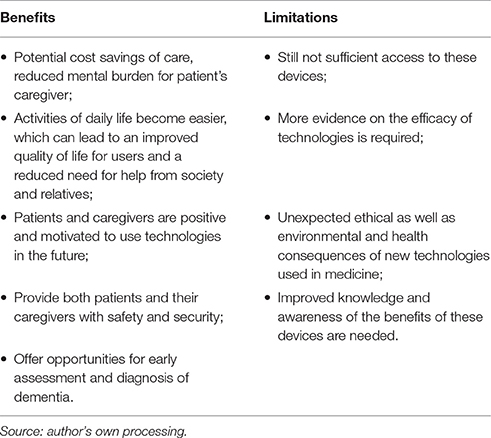 Table 1. Benefits and limitations of the use of mobile phone apps in the management and assessment of MCI and/or mild-to-moderate dementia.

The author of this opinion article indicates that the mobile phone apps can provide support for patients with MCI and/or mild-to-moderate dementia in their activities of daily life, and especially, in the early diagnosis of this cognitive disorder. In addition, they can reduce both mental and economic burden of patients and their caregivers. Nevertheless, more evidence-based research studies should be conducted to prove the efficacy of mobile phone apps intervention in the management of cognitive disorders such as dementia to properly address this issue (cf. Boulos et al., 2014; Garcia-Casal et al., 2016) since more research is performed with healthy older individuals (cf. Kueider et al., 2012; Powers et al., 2013; Lampit et al., 2014; Toril et al., 2014).

And although older people will be becoming digitally more savvy, training should be provided to avoid social anxiety of using these mobile phone apps. In addition, companies developing health-related mobile phone apps should focus on meeting specific needs of their potential older clients whose number will be rapidly rising in the near future (cf. Thorpe et al., 2016).

BK contributed to the drafting, analyses, and final version of the whole manuscript. The author read and approved the final manuscript.

The reviewer KO and handling Editor declared their shared affiliation.

The paper is supported by the project Excellence (2017) run at the Faculty of Informatics and Management of the University of Hradec Kralove, Czech Republic.

Copyright © 2017 Klimova. This is an open-access article distributed under the terms of the Creative Commons Attribution License (CC BY). The use, distribution or reproduction in other forums is permitted, provided the original author(s) or licensor are credited and that the original publication in this journal is cited, in accordance with accepted academic practice. No use, distribution or reproduction is permitted which does not comply with these terms.