Objective: To assess the neurotherapeutic effect of HBOT on prolonged post-concussion syndrome (PPCS) due to TBI, using brain microstructure imaging.

Conclusions: The mechanisms by which HBOT induces brain neuroplasticity can be demonstrated by highly sensitive MRI techniques of DSC and DTI. HBOT can induce cerebral angiogenesis and improve both white and gray microstructures indicating regeneration of nerve fibers. The micro structural changes correlate with the neurocognitive improvements.

Traumatic brain injury (TBI) is a significant public health concern in military and civilian populations (Chiu and LaPorte, 1993). The estimated number of TBI cases occurring each year is 10 million globally and 1.7–3.8 million in the United States alone. 75–90% of those are defined as mild TBI (mTBI) (Selassie et al., 2013; Marin et al., 2014).

The post-concussion syndrome (PCS) is a complex of symptoms consisting of headaches, dizziness, imbalance, vertigo, fatigue, changes in sleep pattern, neuropsychiatric symptoms (e.g., behavioral and mood changes, confusion), and cognitive impairments (in memory, attention, concentration and executive functions) (McCauley et al., 2005). PCS is most often described in the setting of mTBI, but may also occur after moderate and severe TBI. In Eight to Ninty percent of mTBI cases, the symptoms fade away in 7–10 days (McCrory et al., 2005; Hadanny and Efrati, 2016). Still, in 10–20 percent, PCS may persist for weeks or months due to structural and/or metabolic brain damage. Twenty-five to thirty-three percent of those retain a permanent brain injury and experience persistent PCS; the symptoms turn chronic and endure more than 6 months (Kashluba et al., 2004; Bazarian et al., 2005; Iverson, 2005; Sterr et al., 2006; King and Kirwilliam, 2011).

The current study was aimed at evaluating the effects of HBOT on brain microstructure in chronic neurological deficiencies stemming from TBI. This has not been studied in humans so far.

A retrospective analysis of patients suffering from chronic neurocognitive impairment due to TBI, treated at Sagol Center for Hyperbaric Medicine and Research at Assaf Harofeh Medical Center, Israel, between September 2013 and December 2015. The study was approved by the Institutional Review Board of the hospital (0030-15-ASF) and registered in the US National Institute of Health Clinical Trials registry (NCT02452619).

Inclusion criteria: Patients with chronic neurocognitive impairment started only after TBI, persisting over 6 months who underwent two MRI brain imaging (including DTI and DSC sequences) and two neurocognitive tests, pre- and post- hyperbaric oxygen therapy (HBOT). All patients applied for HBOT of their own volition. Patients with other neurological conditions were excluded from the study's cohort.

Patients were treated in a multiplace hyperbaric chamber (HAUX-Life-Support GmbH) for 60 daily hyperbaric sessions, 5 days a week. Each session consisted of 90 min of exposure to 100% oxygen at 2 ATA. Acceptable compression and decompression rates of 0.8 meter per minute were employed. Oxygen was delivered by tight masks.

The NeuroTrax data were uploaded to the NeuroTrax central server, and outcome parameters were automatically calculated using a software blind to diagnosis or testing site. To account for the effects of age and education on cognitive performance, each outcome parameter was normalized and fit to an IQ-like scale (mean = 100, S.D. = 5) according to age and education. The normative data used by NeuroTrax consist of test data from cognitively healthy individuals in controlled research studies at more than 10 sites (Doniger, 2014).

Specifically, the patients received two different versions of the NeuroTrax test battery before and after HBOT so as to produce minimal learning effects upon repeated administration. Test-retest reliability for those versions was found to be high (Schweiger et al., 2003; Melton, 2005). Each cognitive domain score was calculated out of 3–5 different tests. It had 3 different forms of each test - out of which we used one for pre exam and another for the post test. This is a strong feature of these tests as it reduces the “learning effect” with a good test/retest validity. The fact that each index is referred to more than one test-score ensures that the index is associated with a cognitive domain score rather than with a test-dependent score.

In addition to the MRI analysis described above, continuous data were expressed as means ± standard errors. The normal distribution for all variables was tested by means of the Kolmogorov-Smirnov test. The mean differences between cognitive index scores before and after HBOT were analyzed using two-tailed paired t-tests or a Wilcoxon signed-rank test. The alpha level was set to 0.05. Data were statistically analyzed using SPSS software (version 22.0).

Fifteen patients with chronic cognitive impairment due to TBI who were treated at the Sagol Center for Hyperbaric Medicine and Research between September 2013 and December 2015 fulfilled the inclusion criteria. 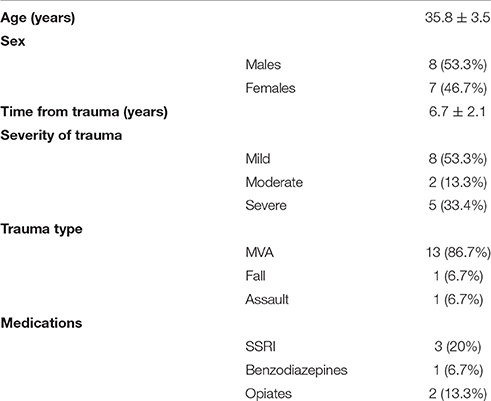 The effect of HBOT on the patients' cognitive functions is summarized in Figure 1 and Table 2. 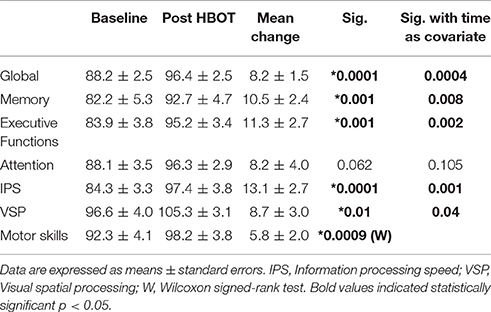 Voxel-based DTI analysis was compared before and after HBOT using paired t-test. FA and MD whole brain maps are depicted in Figures 2, 3, and show the statistically significant increase in FA (yellow in Figure 2) and decrease in MD (blue in Figure 3) average values. 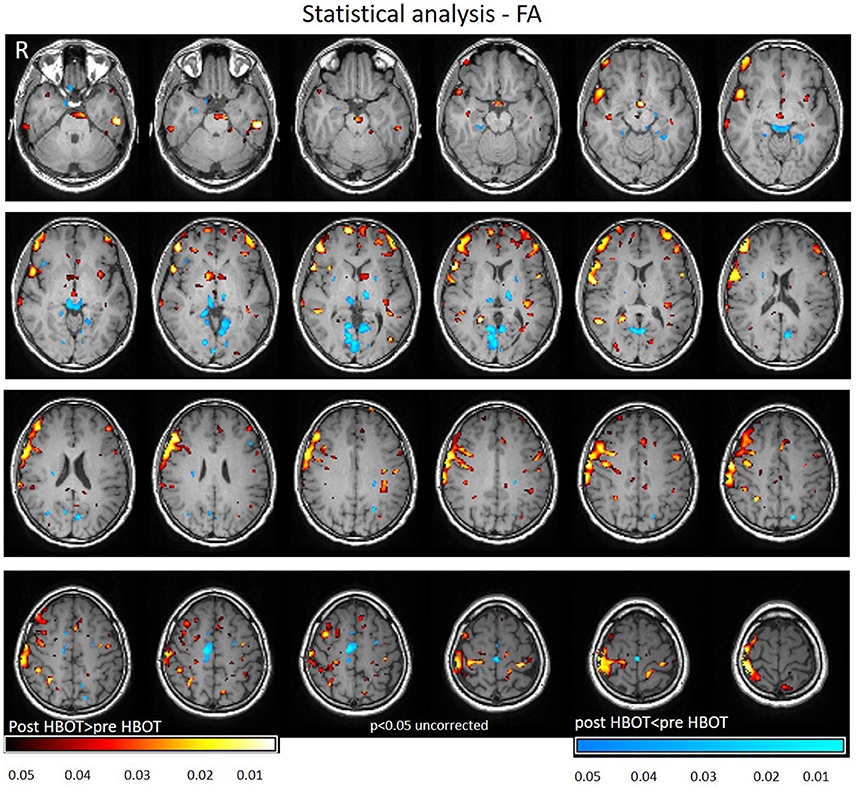 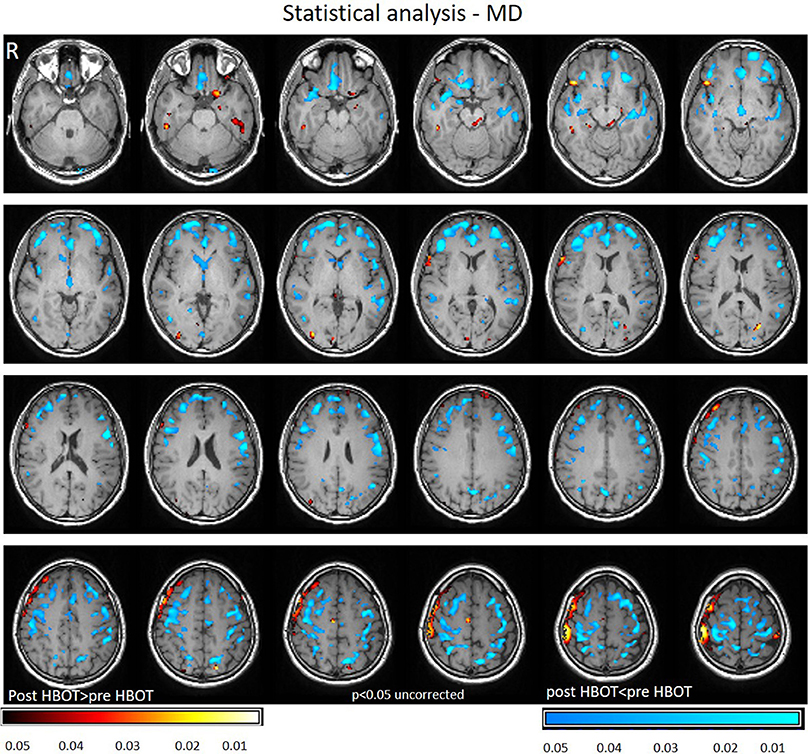 Decrease in FA was found in areas related to the visual system (superior colliculi, calcarine sulcus) and other cognitive areas (thalamus, and posterior cingulate gyrus). Graphs of FA in significant clusters are presented in Figures 4A,B. 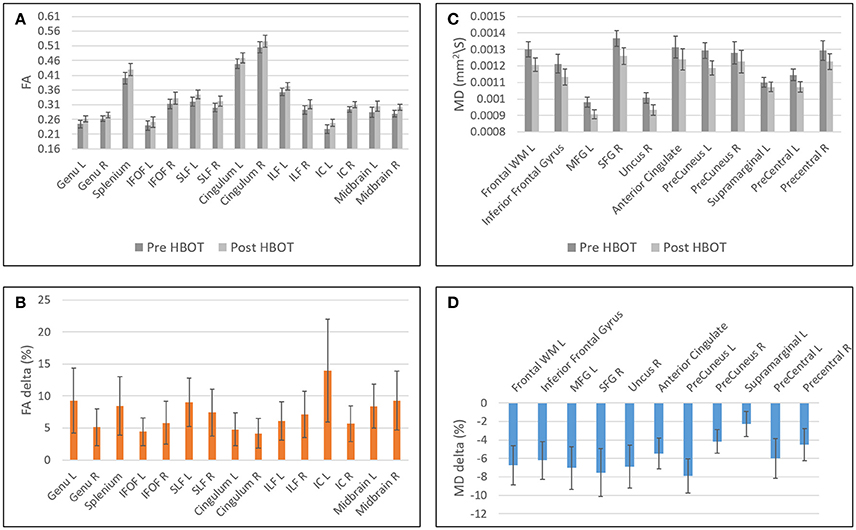 Voxel-based DSC analysis was compared before and after HBOT using paired t-test. Average CBV and CBF and delta whole brain maps are depicted in Figure 5, and show the increase in both CBF and CBV post HBOT. 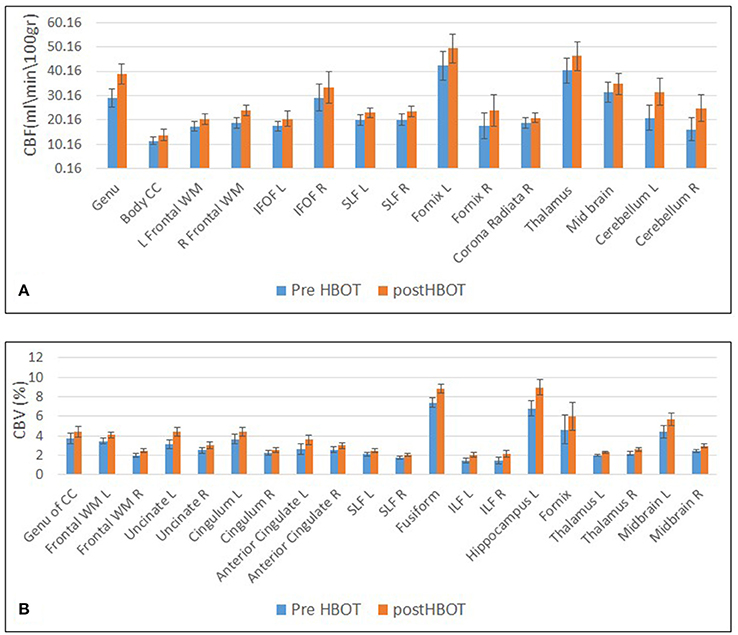 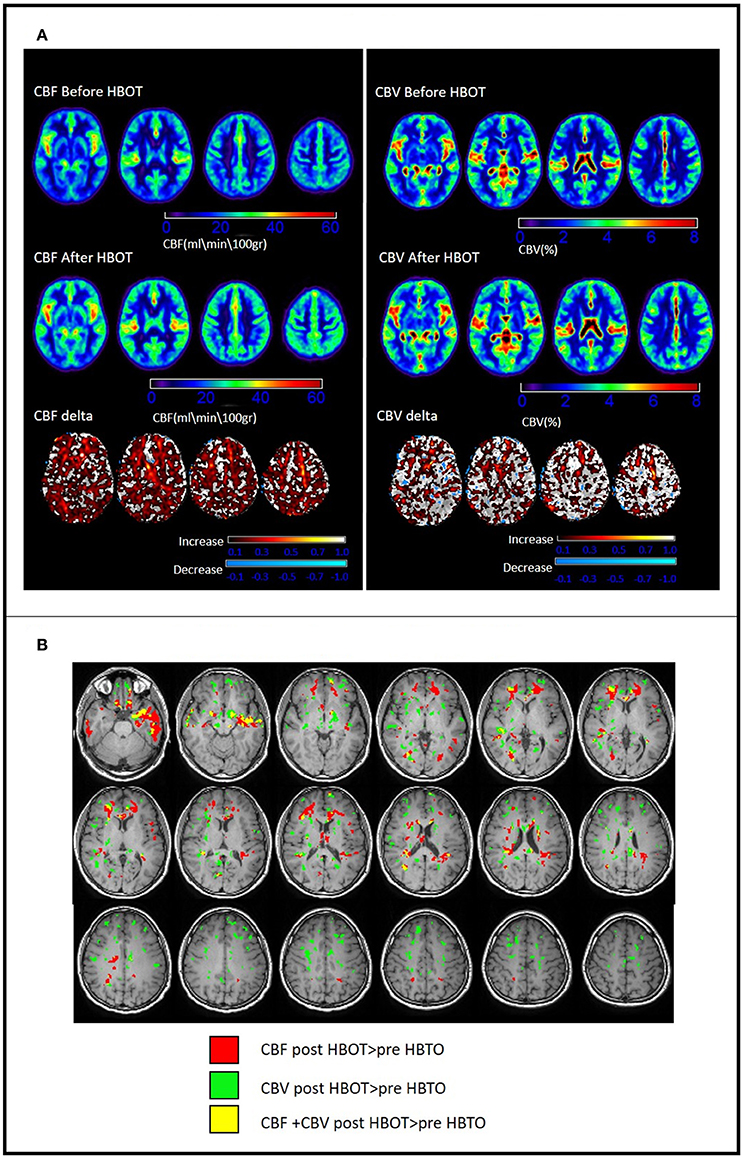 In the current study, for the first time in humans, DTI changes of chronic TBI were evaluated before and after HBOT. The increase in FA and decrease in MD post HBOT, together with cognitive function improvement of patients in the late chronic stage of TBI, suggest that brain microstructure recovery can be induced by HBOT.

DTI values, FA and MD, were found in our study to correlate with the improvements in cognitive functions in concordance with previous studies (Sugiyama et al., 2009; Wada et al., 2012; Arenth et al., 2014; Haberg et al., 2015). Memory, executive function and information processing speed were all significantly improved. In correlation with these cognitive improvements, MD decreased in most of the frontal lobe white matter, such as the prefrontal cortex that enables executive control (Miller and Cohen, 2001) and the anterior cingulate gyrus involved in error detection, especially in a Stroop task (Bush et al., 2000). Also, FA increased in most of the long association fibers critical for proper cognitive function:

• ILF–Connection between the temporal and occipital lobes on the same hemisphere. The ILF is known to play an important role in visual memory (Bauer and Trobe, 1984; Shinoura et al., 2007). In correlation with those changes, there was a significant improvement in the memory index, which includes a visual memory task (i.e., Memory: 10.5 ± 2.4, p < 0.001).

• Cingulum – A cluster of white matter fibers projecting from the cingulate gyrus in the frontal lobe to the entorhinal cortex in the temporal lobe. The cingulum has been tightly associated with memory disorders (Charlton et al., 2006; Sepulcre et al., 2009). The memory correlates also with the changes in the cingulum.

• Genu of the Corpus Callosum-The largest white matter structure in the brain. It connects the left and right cerebral hemispheres and facilitates interhemispheric communication. Integrity of the corpus callosum is linked to information processing speed and episodic memory (Bucur et al., 2008; Lockhart and DeCarli, 2014). The improvement in information processing speed and memory indices may also correlate with the improvement in the genu of the corpus callosum.

Mechanisms of neuroplasticity and cellular repair by HBOT have been suggested in many animal studies (Hadanny and Efrati, 2016). These include enhanced mitochondrial function and cellular metabolism, improved blood brain barrier and inflammatory reactions, reduced apoptosis, alleviation of oxidative stress, increased levels of neurotrophins and nitric oxide, and up-regulation of axonal guidance agents (Efrati et al., 2013; Efrati and Ben-Jacob, 2014). Moreover, the effects of HBOT on neurons may be mediated indirectly by glial cells. HBOT may also promote neurogenesis of endogenous neural stem cells (Efrati et al., 2013; Efrati and Ben-Jacob, 2014). HBOT may enable the metabolic change simply by supplying the missing oxygen/energy needed for these regeneration processes (Efrati et al., 2013; Efrati and Ben-Jacob, 2014). The ability of HBOT to induce angiogenesis was demonstrated in several different pre-clinical studies (Mu et al., 2011; Lin et al., 2012; Lee et al., 2013; Hu et al., 2014). Hu et al. have demonstrated that HBOT-induced neurogenesis is mediated by ROS/HIF-1α/β-catenin pathway (Hu et al., 2014). In the current study, it is demonstrated that HBOT can induce neuroplasticity in humans even years after the acute insult.

Along with the structural changes, HBOT induces angiogenesis, as shown by the increase of CBF and CBV in this study as well as in our previous study (Tal et al., 2015). The injured areas in the brains post TBI experience hypoxia and hypoperfusion, which serve as a rate-limiting factor for any regenerative process (Graham and Adams, 1971; Graham et al., 1978; Stein et al., 2004; Kim et al., 2010; Ostergaard et al., 2014). HBOT-induced angiogenesis has been amply confirmed in pre-clinical models and can be deduced from brain SPECTs of patients post stroke and post TBI even years after the acute insult (Lin et al., 2012; Boussi-Gross et al., 2013; Efrati et al., 2013; Peng et al., 2014; Duan et al., 2015). The generation of new microvessels renders the local environment non-hypoxic, thus able to induce brain plasticity, enhance neurogenesis and synaptogenesis and foster functional recovery (Chen et al., 2003; Jiang et al., 2005). Unsurprisingly, CBV and CBF increased in the long association fiber tracts discussed above, including corpus callosum, association fibers (SLF, IFOF) and cingulum. Angiogenesis and increased perfusion to the malfunctioning tissue, seen in DSC, serve as infrastructure for the regenerative process and the preservation of newly generated metabolic functioning of the axonal microstructure seen in DTI.

HBOT can induce cerebral angiogenesis and recovery of brain microstructure in patients with chronic cognitive impairments due to TBI months to years after the acute injury. The increased integrity of brain fibers correlates with the functional cognitive improvement. The mechanism by which HBOT can induce brain neuroplasticity can be demonstrated by highly sensitive perfusion MRI and DTI. Further studies, using DTI - MRI, are needed in order to gain better understanding of the neuroplasticity effect of HBOT in a larger cohort of patients with different types of brain injuries.

Special thanks to Ms. Michal Ben-Jacob and Mr. Raz Tuval for reviewing and proofing the manuscript.

The Supplementary Material for this article can be found online at: https://www.frontiersin.org/articles/10.3389/.2017.00508/full#supplementary-material

Leemans, A., Jeurissen, B., Sijbers, J., and Jones, D. K. (2009). “ExploreDTI: a graphical toolbox for processing, analyzing, and visualizing diffusion MR data,” in Proceedings of the 17th Annual Meeting of the International Society for Magnetic Resonance in Medicine (Hawaii), 3537. Available online at: http://www.exploredti.com/ref/ExploreDTI_ISMRM_2009.pdf

Copyright © 2017 Tal, Hadanny, Sasson, Suzin and Efrati. This is an open-access article distributed under the terms of the Creative Commons Attribution License (CC BY). The use, distribution or reproduction in other forums is permitted, provided the original author(s) or licensor are credited and that the original publication in this journal is cited, in accordance with accepted academic practice. No use, distribution or reproduction is permitted which does not comply with these terms.