Can Your DNA Influence Your Bet-Placing? The Impact of Cannabinoid Receptor 1 Gene on Gambling Tasks

Are we placing a bet by ourselves or has our DNA already made the decision for us? Previous research has suggested that some genes related to dopamine or serotonin can influence our non-bet-placing decision-making, but little is known about whether cannabinoid-related genes can impact how much people bet. To investigate this issue, we focused on rs1049353, a single-nucleotide polymorphism of the cannabinoid receptor 1 (CNR1), because it is related to addictive behavior and reward processing. In this study (N = 377), we used a modified Cambridge gambling task to test the effect of rs1049353 polymorphism on how much people bet. We found that participants who are homozygous for C allele placed significantly larger bets than C/T carriers [F(1,371) = 7.805, P = 0.005]. We further studied the gene expression map in human brains and found that the CNR1 gene is overexpressed in striatum, amygdala, and hippocampus. These brain structures are known to underpin reward and risk processing. Our findings suggest that, to some extent, high-level social decision-making even like bet-placing could be influenced by a single genetic locus variation in healthy volunteers. In addition, such effects were likely to be mediated by key brain regions in the reward- and risk-processing networks.

Regarding the neurobiological basis of decision-making, the striatum is the terminal region of the dopaminergic mesolimbic system, which is involved in motivational processes (Di et al., 2004; Everitt and Robbins, 2005). In addition, many animal and human studies have identified the ventral striatum playing a crucial role in reward processing (Parkinson et al., 2000; Schultz et al., 2000; Mobbs et al., 2003). During reward processing, increased ventral striatum activity was associated with dopamine release in this brain region (Knutson and Gibbs, 2007; Schott et al., 2008), and the level of striatal dopamine was associated with the function of the ventral hippocampus (Grace, 2016). For instance, stimulating the ventral hippocampus can increase the concentration of dopamine strongly (Blaha et al., 2010).

In genetic studies, it has been shown that rs1049353 polymorphism of the cannabinoid receptor 1 (CNR1) gene affects addictive behaviors such as alcohol, marijuana, and heroin dependence (Hartman et al., 2009; Proudnikov et al., 2010; Agrawal et al., 2012; Yang et al., 2014). Rs1049353 is located in exon4 of the CNR1 gene. The CNR1 gene is located on human chromosome 6 and encodes the cannabinoid receptor 1 (Mackie, 2008; Onaivi, 2009). Specifically, the C/C genotype of rs1049353 was a risk factor for drug dependence (Schmidt et al., 2002; Hartman et al., 2009; Proudnikov et al., 2010; Yang et al., 2014). Drug abuse was usually associated with risky behavior, and disorders associated with substance use have been related to the personality trait of impulsivity (Ehlers et al., 2007). Adults with a history of drug dependence also chose risky options more often (Lane and Cherek, 2000) and increased risky decision-making in the Iowa gambling task (Lane et al., 2005). Based on the above, we hypothesized that rs1049353 polymorphism of the cannabinoid receptor 1 gene would affect risk- and reward-related bet placing in our experiment because subjects with the C/C genotype in rs1049353 are more susceptible to drug dependence, which directly involves risk- and reward- processing.

In this study, we determined the subjects’ genetic information for the CNR1 gene and modified the Cambridge gambling task (Rogers et al., 1999) to measure their risk behavior and reward processing. In addition, we obtained the gene expression map from the Allen Human Brain Atlas (Hawrylycz et al., 2012) to further investigate the neurobiological mechanisms linking the CNR1 genotype with behavior performance in our experiment.

In this study, we modified the Cambridge gambling task (MCGT), as shown in Figure 1A. In each trial, an array of nine red and blue boxes were displayed on the screen. Each subject was asked to guess which color of boxes contained a yellow token. The box in which the token was hidden was randomly allocated with a uniform distribution. The ratio between the numbers of red and blue boxes varied from 1:8 to 8:1 and red boxes were always placed on the left-hand side. The subjects chose a color of boxes by pressing a corresponding key with the middle finger (red) and index finger (blue) of their left hands. The boxes of the chosen color were then marked with pink borders. The subjects then needed to decide how much money to bet on their choice. 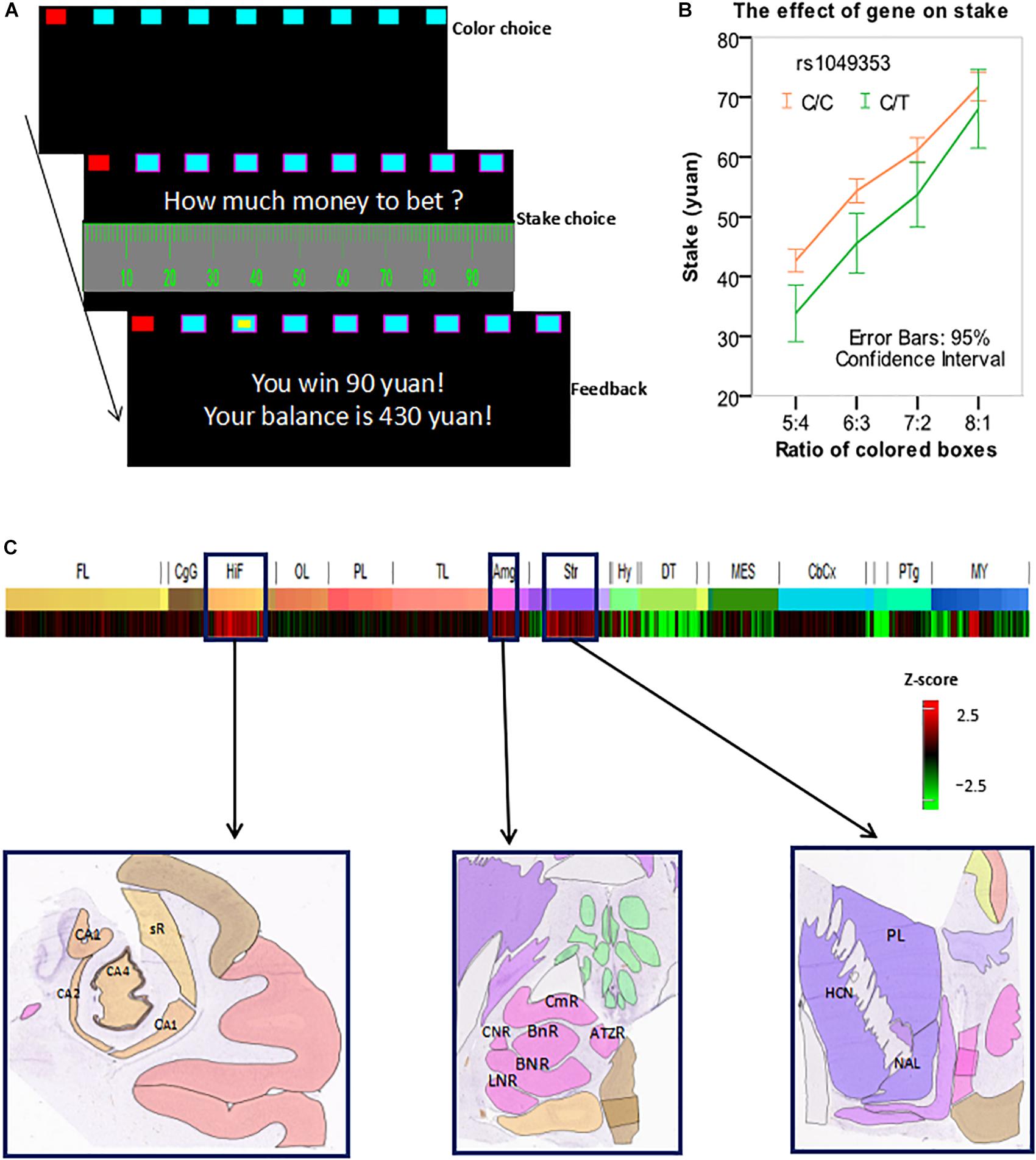 In each trial, a subject could bet from 0 to 100 Chinese yuan (equivalent to about 15 USDs) by clicking a corresponding mark on the scale with the mouse (say X yuan). A yellow token would then randomly appear in one of the nine boxes. If the subject’s chosen color was the same as the color of the box in which the token was hidden, then she won X yuan, which would be added into the total balance; otherwise, she lost X yuan, which would be subtracted from the balance. The goal of the subject was to maximize the total balance. Before the actual tests, there were two exercise trials. The actual experiment contained 72 trials presented in a randomized order. To avoid the order effect on individual differences, all subjects’ experiments had the same order. There was a break halfway through the task.

For rs1049353, the genotypes were determined by the MassARRAY system (Agena iPLEX assay, San Diego, CA, United States). First, we isolated approximately 10–20 ng of genomic DNA from the saliva. The polymerize chain reaction (PCR) primers used in this study were ACGTTGGATGAATGCAGCCAGTGTTCACAG and ACGTTGGATGACAGACATGGTTACCTTGGC. The sample DNA was amplified by a multiplex PCR reaction, and the obtained products were used for locus-specific single-base extension reaction. Unextended primers used in this study were ACCTTGGCAATCTTGAC. At last, the resulting products were desalted and transferred to a 384-element spectral array. The alleles were discriminated by mass spectrometry (Agena, San Diego, CA, United States). The rs1049353 genotype was coded as a categorical variable (C/C, C/T, and T/T) for subsequent analysis.

The gene expression map was obtained from the Allen Human Brain Atlas1 by searching for brain regions that have overexpression of CNR1. Details of gene expression analysis methods can be found on the website.

First, we averaged stakes within the subjects to obtain within-subject mean, based on which we calculated between-377-subject mean and standard error. The resulting mean was 56.42, and the standard error was 0.90. Using a similar calculation for each ratio respectively, we obtained more special descriptive results, as shown in Table 1.

The Effect of rs1049353 Polymorphism on Stake

As previously explained, we used the Allen Human Brain Atlas and found that the CNR1 gene was overexpressed in three brain regions: hippocampus, amygdala, and striatum (see Figure 1C).

In this study, rs1049353 polymorphism was found to significantly influence performance in the MCGT. Subjects homozygous for the C allele placed higher stakes than the C/T carriers in the task. These results were consistent with previous findings that subjects with such genotype were more susceptible to drug addiction and risk-taking behavior. Using the Allen Human Brain Atlas, we found that the CNR1 gene was overexpressed in three brain regions: striatum, hippocampus, and amygdala. These brain regions are important centers in the risk- and reward-processing networks in the brain and have been shown to be critical in decision-making, as previously discussed in Introduction. Therefore, this neural network is likely to play a significant role in mediating the effect of CNR1 on risk- and reward-related bet-placing behavior in our data.

Our findings have implications on understanding neurobiological and genetic factors in high-level and complex social decision-making and clinical conditions related to cannabinoid systems. However, the precise molecular and brain mechanism by which this process occurs awaits future research.

The protocol was approved by the Administrative Committee of Psychological Research at Southwest University. All subjects gave written informed consent in accordance with the Declaration of Helsinki.

All authors conceived and designed the experiments, collected and analyzed the data, and wrote and revised the manuscript.

Copyright © 2018 Qin, Zeng, Chen, Deng and Su. This is an open-access article distributed under the terms of the Creative Commons Attribution License (CC BY). The use, distribution or reproduction in other forums is permitted, provided the original author(s) and the copyright owner(s) are credited and that the original publication in this journal is cited, in accordance with accepted academic practice. No use, distribution or reproduction is permitted which does not comply with these terms.