Clinical Outcomes After Radioiodine Therapy, According to the Method of Preparation by Recombinant TSH vs. Endogenous Hypothyroidism, in Thyroid Cancer Patients at Intermediate-High Risk of Recurrence

Background: To effectively treat differentiated thyroid carcinoma (DTC) with radioiodine therapy (RAI), it is necessary to raise serum thyrotropin levels, either by thyroid hormone withdrawal (THW) or by administration of recombinant human TSH (rhTSH). The use of rh-TSH is controversial in DTC patients at intermediate to high risk of recurrence. Even more controversial is the question of whether is alters progression-free survival rates and overall survival in more aggressive patients.

Objective: The primary objective of this study was comparing clinical outcomes according to the method of preparation of RAI in intermediate to high DTC patients who presented progression of structural disease.

Results: After a median follow-up time of 83 months, there were no statistical differences in the clinical outcomes (status of structural disease at the end of the follow-up, death rate, overall survival curve, and progression-free survival curve).

Conclusions: Preparation for RAI therapy using either rhTSH stimulation or THW was associated with no inferiority in the clinical outcomes in progressive DTC patients at higher risk of recurrence.

In general, differentiated thyroid carcinoma (DTC) presents an indolent course and excellent prognosis, with a 10-year survival rate that exceeds 90–95%. This overall survival rate decreases when distant metastasis is present. As described in the AJCC 8th edition, the mortality rate is 50% in stage IV patients over the first 5 years of follow-up (1, 2).

The management of patients with DTC at intermediate to high risk of recurrence consists of total thyroidectomy with or without lymph node dissection, followed by radioiodine therapy (RAI). RAI adjuvant therapy is routinely recommended after total thyroidectomy for intermediate to high DTC patients because it is associated with increased overall survival and disease-free survival (2).

Two methods of preparation for RAI can be used to achieve the goal TSH of >30 mIU/L. One method is endogenous hypothyroidism after thyroid hormone withdrawal (THW) for a period of 3–4 weeks, the other method is exogenous stimulation with the administration of recombinant human TSH (rhTSH). The use of rhTSH is related to a better quality of life in the short term because it avoids the symptoms of hypothyroidism resulting from THW (2, 3).

In intermediate to high DTC patients, rhTSH preparation for RAI adjuvant treatment is not routinely recommended, especially if distant metastases are known or suspected. According to the current American Thyroid Association (ATA) guidelines, more data from studies with long-term outcomes are needed before preparation with rhTSH can be recommended in this group of patients (2). However, this preparation can be considered in intermediate to high DTC patients with significant comorbidities, such as severe lung disease, congestive heart failure, coronary artery disease, psychiatric disorders, and others. In these situations, endogenous hypothyroidism resulting from THW may be poorly tolerated and lead to serious adverse events (2, 4). The use of rhTSH can also be considered in patients who do not have an increased TSH after TWH, such as in central hypothyroidism and those with a high tumor burden (2, 5).

In recent years, there has been an increase in retrospective studies suggesting that rhTSH-stimulated RAI therapy may be effective in treating ATA high-risk DTC patients and/or RAI avid distant metastasis (3, 4, 6–9), as well as in remnant ablation, in patients with primary T4 tumor (10). However, it is still questionable whether the radiation activity delivered to DTC metastases after rhTSH is lower compared to preparation by THW (11).

Furthermore, no randomized prospective trials have been performed evaluating the RAI preparation in these patients, and there are no data in the literature comparing the method of RAI preparation (rhTSH vs. endogenous hypothyroidism) in ATA high-risk DTC patients with structural disease progression. It is known that around 30–40% of patients with the structural disease may progress during follow-up (2), however, it is not yet studied if the preparation for RAI could impact this outcome.

The preparation of RAI with rhTSH has been performed at the Instituto Nacional de Cancer (INCA) in ATA high-risk DTC patients since 2010. In this institution, the preparation of RAI with rhTSH is not indicated only in patients with known distant metastasis to the spine, skull, central nervous system (CNS), in which the abrupt increase of TSH could cause spinal cord compression or damage to the CNS. In these patients, the RAI preparation is always performed by endogenous hypothyroidism, through THW.

Thus, the aim of this study is to retrospectively compare the clinical outcomes, according to the method of preparation of the RAI, in ATA intermediate to high-risk DTC patients, who presented progression of structural disease.

The study was carried out at the Oncological Endocrinology Sector of INCA, through a retrospective analysis of medical records of patients with DTC at high risk of recurrence, with the progression of structural disease after RAI. To identify the patients, an active search was carried out in the historical records of the Nuclear Medicine and Endocrinology services of INCA, including patients who underwent RAI between 08/01/1997 and 06/05/2019. This study was approved by the local Research Ethics Committees.

A total of 81 patients were included in the study. Inclusion criteria were: age over 18 years, histologically confirmed diagnosis of DTC after total thyroidectomy or near-total thyroidectomy, clinical staging of ATA high risk of recurrence; at least one RAI activity at the INCA, minimum follow-up of 12 months and presence of progression of structural disease after RAI anytime during follow-up.

And finally, variables were evaluated regarding clinical outcomes: dynamic risk stratification at the end of follow-up, according to the ATA guideline 2015; structural disease status at the end of follow-up, through the evaluation of the last Tg and antithyroglobulin and available imaging tests; progression-free survival; overall survival (at death); follow-up time; and death rate.

Two different analyses were performed: Comparing the three proposed groups: THW only, rhTSH only, and a mixed group; and a second analysis comparing only patients prepared exclusively with one modality.

Clinicopathological Characteristics and Clinical Outcomes of the Entire Cohort

Eighty-one patients were included in the study. Clinical characteristics at the time of diagnosis and clinical outcomes at the end of follow-up are described in Tables 1, 2. 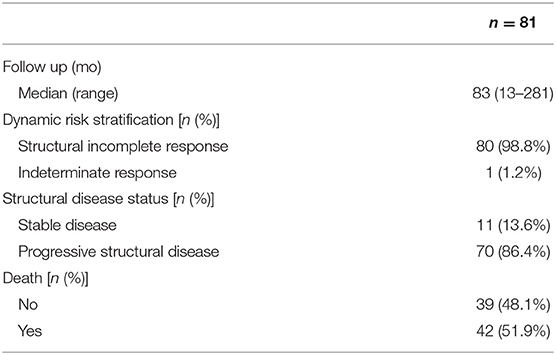 Clinicopathological Features, According to RAI Preparation

As described above, 21 patients (25.9%) were prepared for RAI only with rhTSH (group 1), 11 patients (13.6%) performed more than one RAI and were prepared sometimes with THW and sometimes with rh-TSH (group 2), and 49 patients (60.5%) performed RAI only after THW (group 3). Of the patients in group 2, 10 performed the first RAI after THW, and the others RAIs after rhTSH. Only one patient in group 2 had the first RAI after rhTSH, and the others RAIs after THW.

The clinical characteristics based on the method of preparation for RAI treatment are given in Table 3. When evaluating the clinical characteristics of the three groups according to age, sex, histology, tumor size, TNM staging, diagnosis and distribution of distant metastasis, activity, and RxWBS of the first RAI, there was no statistical difference according to the method of preparation for RAI.

Comparing THW only with rhTSH only, also no differences among the groups were seen (Table 4).

Table 4. Clinicopathological features and according to RAI preparation.

Clinical Outcomes Based on Method of Preparation 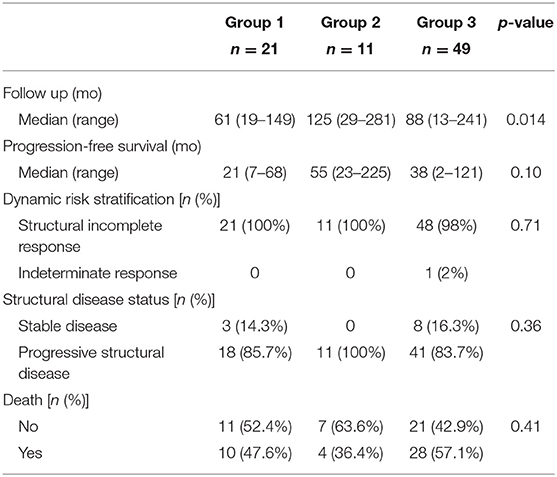 Table 5. Clinical outcomes, according to the RAI preparation. 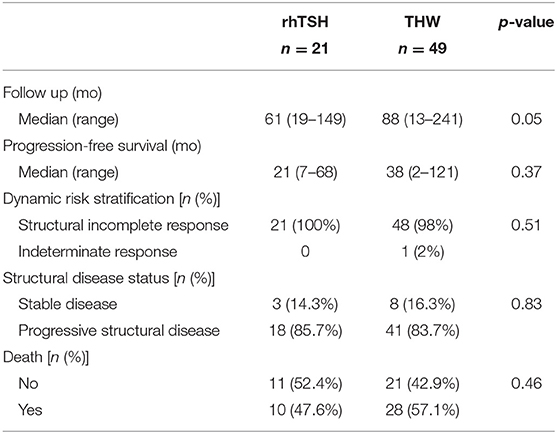 Table 6. Clinical outcomes, according to the RAI preparation.

Comparing groups 1 and 3, those with only one method of preparation, it was also possible to show no difference in outcomes (Table 6).

This study evaluating 81 patients with ATA high-risk DTC and structural disease progression shows non-inferiority in final clinical outcomes, according to the method of RAI preparation with rhTSH or endogenous hypothyroidism, in a population in which the use of rhTSH is still controversial. Even in these more aggressive patients that showed progression during follow-up, preparation for RAI did not interfere. Furthermore, using rhTSH with some caution, no adverse effect was reported.

In our study, there was a statistical difference in the accumulated radioiodine activity between the 3 groups, with group 2 showing the highest accumulated RAI activity, probably because all patients in this group performed more than one RAI. In the study by Tala et al. (6), which also showed no significant difference in outcomes attributed to the difference in preparation for RAI, the accumulated radioiodine activity was also higher in patients who underwent RAI after preparation with THW followed by rhTSH, when compared to the group who underwent preparation with THW only or rhTSH only (median 967 vs. 522 vs. 408 mCi, respectively, p 0.038). The author similarly justifies this fact due to the higher number of radioiodine treatments in the mixed group.

Regarding additional therapies, our study showed no statistical difference between the groups according to RAI preparation. Likewise, Klubo-Gwiezdzinska et al. (4) showed that the frequency of additional treatments, including other modalities applied, such as external beam radiation therapy, surgical excision of metastatic lesions, and treatment of patients with bone metastasis with zolendronic acid was similar between the groups that prepared with rhTSH vs. THW.

As described in the AJCC 8th edition (1), the mortality rate is 50% in stage IV patients over the first 5 years of follow-up. In our study, most patients were above 55 years old and already had distant metastasis at diagnosis. The death rate was high, similar to that described by the AJCC, and there was no statistical difference between the groups according to the RAI preparation. As expected by initial risk stratification, the persistence of structural disease at the end of follow-up also showed high rates, and most patients were classified as having an incomplete structural response and once again, these were not modified by different preparations for RAI.

As with any retrospective study, there are some limitations that must be considered. First and foremost is the potential for a selection bias that may occur when prioritizing RAI after THW, instead of rhTSH, in patients with higher risk disease or metastasis to noble areas. However, this bias also occurs in other retrospective studies, and in our study, we observed no statistical difference in clinicopathological features between patients prepared with rhTSH and THW. Prospective, randomized studies would be necessary to address this potential bias.

In conclusion, in this retrospective study clinical outcomes were similar in the progressive high-risk DTC patients prepared for RAI after rhTSH only, or THW only, or different preparations. Thus, we did not observe inferiority in clinical outcomes according to RAI preparation in our cohort.

The studies involving human participants were reviewed and approved by IRB Inca. Written informed consent for participation was not required for this study in accordance with the national legislation and the institutional requirements.

7. Robbins RJ, Driedger A, Magner J U.S. and Canadian Thyrogen Compassionate Use Program Investigator Group. Recombinant human thyrotropin-assisted radioiodine therapy for patients with metastatic thyroid cancer who could not elevate endogenous thyrotropin or be withdrawn from thyroxine. Thyroid. (2006) 16:1121–30. doi: 10.1089/thy.2006.16.1121

Copyright © 2021 Higuchi, Fernanda, Jurnior, Andrade, Corbo, Vaisman, Vaisman and Bulzico. This is an open-access article distributed under the terms of the Creative Commons Attribution License (CC BY). The use, distribution or reproduction in other forums is permitted, provided the original author(s) and the copyright owner(s) are credited and that the original publication in this journal is cited, in accordance with accepted academic practice. No use, distribution or reproduction is permitted which does not comply with these terms.