Increased consumption of fatty fish, rich in omega-3-polyunsaturated fatty acids (ω3-PUFAs) reduces the severity and number of arrhythmias. Long-term ω3-PUFA-intake modulates the activity of several cardiac ion channels leading to cardiac action potential shortening. Circulating ω3-PUFAs in the bloodstream and incorporated ω3-PUFAs in the cardiac membrane have a different mechanism to shorten the action potential. It is, however, unknown whether circulating ω3-PUFAs in the bloodstream enhance or diminish the effects of incorporated ω3-PUFAs. In the present study, we address this issue. Rabbits were fed a diet rich in fish oil (ω3) or sunflower oil (ω9, as control) for 3 weeks. Ventricular myocytes were isolated by enzymatic dissociation and action potentials were measured using the perforated patch-clamp technique in the absence and presence of acutely administered ω3-PUFAs. Plasma of ω3 fed rabbits contained more free eicosapentaenoic acid (EPA) and isolated myocytes of ω3 fed rabbits contained higher amounts of both EPA and docosahexaenoic acid (DHA) in their sarcolemma compared to control. In the absence of acutely administered fatty acids, ω3 myocytes had a shorter action potential with a more negative plateau than ω9 myocytes. In the ω9 myocytes, but not in the ω3 myocytes, acute administration of a mixture of EPA + DHA shortened the action potential significantly. From these data we conclude that incorporated ω3-PUFAs into the sarcolemma and acutely administered ω3 fatty acids do not have a cumulative effect on action potential duration and morphology. As a consequence, patients with a high cardiac ω3-PUFA status will probably not benefit from short term ω3 supplementation as an antiarrhythmic therapy.

The antiarrhythmic effect of the main circulating ω3-PUFAs (eicosapentaenoic acid, EPA and docosahexaenoic acid, DHA) is generally believed to be related to changes in cardiac cellular electrophysiology (Leaf et al., 2002). Configuration and duration of the cardiac action potential is highly relevant for arrhythmogenesis, regardless whether reentry or triggered activity constitutes the underlying mechanism (Den Ruijter et al. 2007). In general, both acutely administered and incorporated ω3 fatty acids shorten the action potential (Den Ruijter et al., 2006, 2007, 2008; Verkerk et al., 2006; Berecki et al., 2007). However, the ionic currents that are affected by incorporated ω3 fatty acids are different from those affected by acutely administered ω3 fatty acids. This suggests that an additive effect may result when both are present. In this study, we address the issue by measuring cardiac action potentials of isolated ventricular myocytes of rabbits fed a diet rich in fish oil (ω3) or sunflower oil (ω9) for 3 weeks. We superfused these myocytes with a mixture of ω3-PUFAs EPA and DHA. We conclude that acutely administered ω3-PUFAs cannot potentiate the effect of already incorporated ω3-PUFAs. Each leads to similar action potential changes.

The investigation was approved by the local ethics committee and complied with the guiding principles of the Declaration of Helsinki. Male New Zealand White rabbits (4-months old) received a diet supplemented with either 2.5% fish oil or 2.5% high oleic sunflower oil as control, for 3 weeks (Verkerk et al., 2009).

After the feeding period, the animals were anesthetized by a combination of ketamine (intramuscular 100 mg) and xylazine (intramuscular 20 mg), heparinized (Heparine LEO 5000 IU), and killed by an injection of pentobarbital (240 mg). The hearts were quickly excised and left ventricular midmyocardial cells were isolated by enzymatic dissociation as described previously (Den Ruijter et al., 2008). In short, hearts were mounted on a Langendorff perfusion apparatus and retrogradely perfused through the aorta with the following solutions: (1) Tyrode’s solution for 15 min at a constant pressure (50 mm Hg), (2) a Ca2+-free Tyrode’s solution for 15 min (50 mm Hg), and (3) a Ca2+-free Tyrode’s solution to which collagenase type B (0.15 mg/ml, Boehringer Mannheim), collagenase type P (0.05 mg/ml, Boehringer Mannheim), trypsine inhibitor (0.1 mg/ml, Boehringer Mannheim), and 0.15 mg/ml hyaluronidase (Sigma, St. Louis, MO, USA) were added. During this last period, the ventricular free wall was perfused at a constant flow in a recirculating manner. When perfusion pressure dropped from an initial value of 50 to less than 2 mm Hg (usually after about 30 min), the left ventricular wall was cut into small pieces and further fractionated using a standard shaking protocol. All dissociation solutions were saturated with 100% O2 and the temperature was maintained at 37°C.

Small aliquots of cell suspension were put in a recording chamber on the stage of an inverted microscope. Cells were allowed to adhere for 5 min after which superfusion with solution was started. This extracellular solution (36 ± 0.2°C) contained (in mmol/l): NaCl 140, KCl 5.4, CaCl2 1.8, MgCl2 1.0, glucose 5.5, HEPES 5.0, pH 7.4 (NaOH). Quiescent rod-shaped myocytes with cross-striations and smooth surface were selected for measurements.

Action Potentials were measured in the absence and presence of a clinically relevant mixture of fish oil fatty acids EPA (8 μmol/l) and DHA (7 μmol/l) (Den Ruijter et al., 2008) or in the absence and presence of the control fatty acid oleic acid (OA; 15 μmol/l). OA (Sigma), DHA (Sigma), and EPA (Sigma) were prepared as 10 mmol/l stock solutions in dimethyl sulfoxide, stored under nitrogen at –20°C, and diluted appropriately 20 min before use. In order to obtain steady-state conditions, AP recordings were started 5 min after application of the various fatty acids.

Data are presented as mean ± SEM. Group comparisons were made using the (un)paired t-test. ANOVA was used where pertinent. P < 0.05 defines statistical significance. 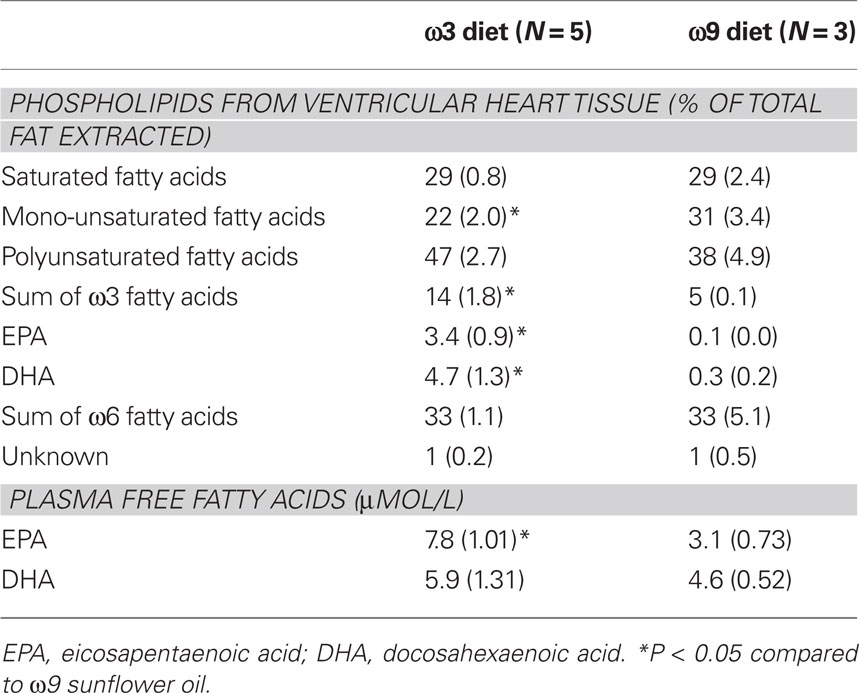 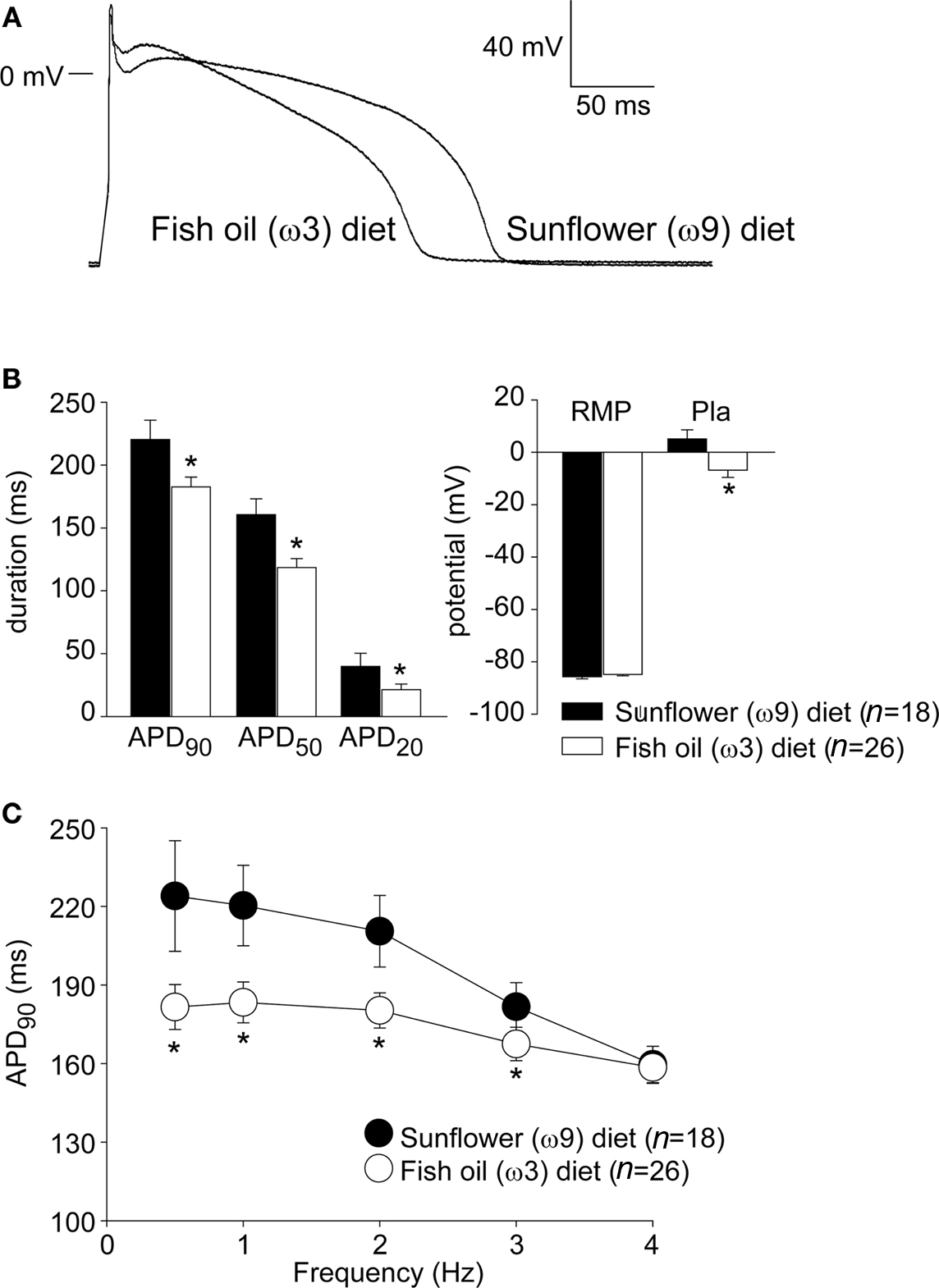 To determine the effect of circulating ω3 fatty acids, we superfused myocytes of both groups with either a mixture of free EPA and DHA (combined 15 μM), or used the control fatty acid OA (15 μM). The concentration of fish oil fatty acids was based on the free fatty acid analysis of the plasma of the rabbits (Table 1). 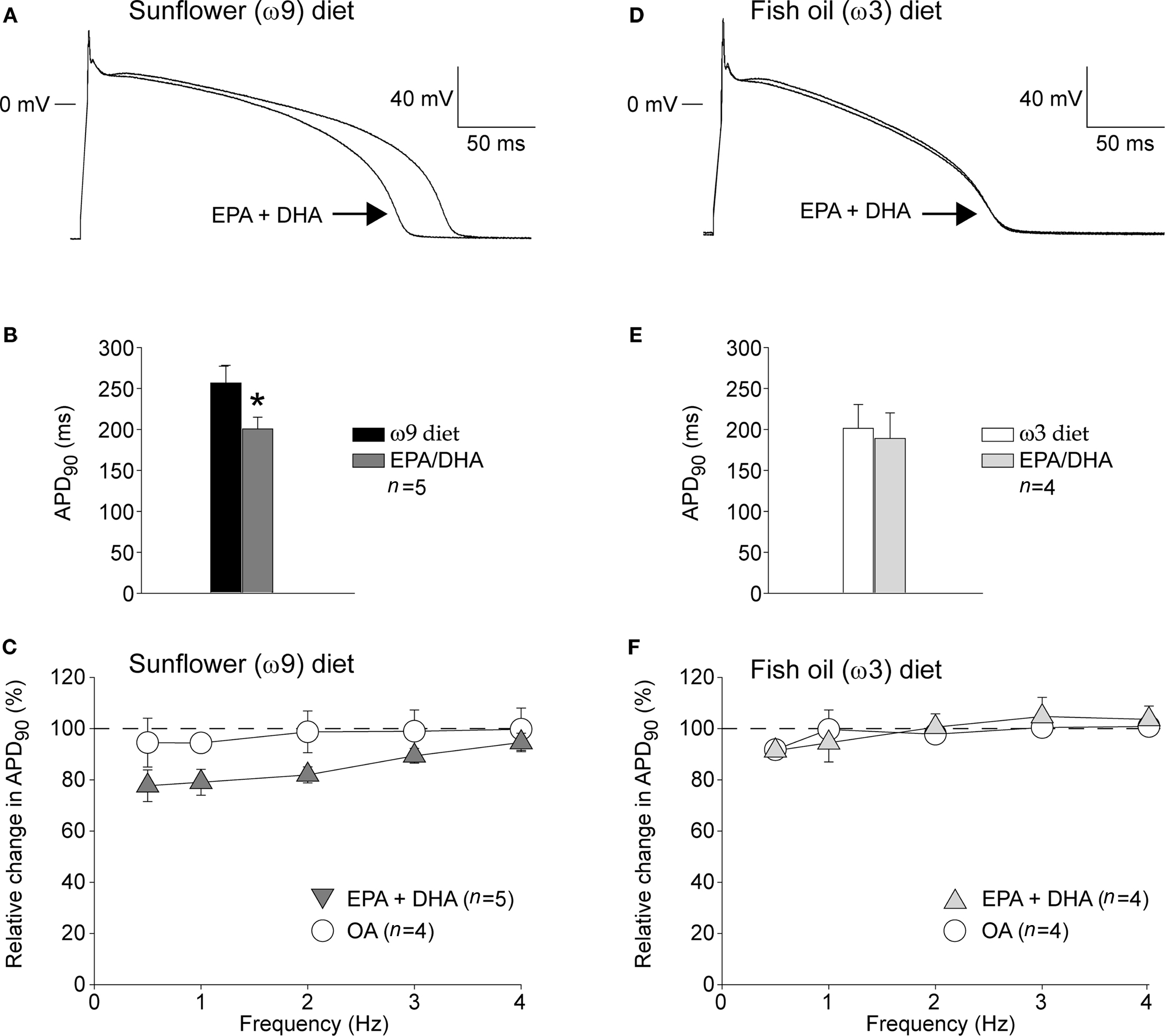 Figure 2. (A,D) Typical example of a action potential recorded from a isolated myocytes of a rabbit fed a ω9 (A) or ω3 (D) diet in the absence and presence of EPA + DHA (15 μM in total). (C,D) Averaged data on APD90 in the ω9 (B) and ω3 (E) group before and after 5 min of superfusion with EPA + DHA. Superfusion with EPA/DHA resulted in a significant shortening of the APD90 in the ω9, but not in the ω3 group. Average data on the relative change induced by the acute superfusion of EPA + DHA and control fatty acid OA in the ω9 (C) and ω3 (F) group.

The action potentials measured in isolated myocytes of the ω3 fed rabbits were approximately 20% shorter compared to the ω9 fed rabbits. Interestingly, the application of a mixture of physiological relevant concentrations of EPA + DHA resulted in a similar shortening of the action potential by approximately 20% in ω9 myocytes. The action potentials recorded from the ω3 fed rabbits were not shortened by acute application of EPA + DHA. These data indicate that it does not matter whether ω3-PUFAs are incorporated in the sarcolemma following a previous diet or are administered acutely with respect to their effects on action potentials. This is surprising because the effects of incorporated or acutely administered ω3-PUFAs on ionic currents are different, despite the similarity of the effects on action potential duration. For example, acute application of ω3-PUFAs in ferret cardiomyocytes does not change IK1 (Xiao et al., 2002), whereas incorporation of ω3-PUFAs following a fish oil diet increases IK1 by approximately 50% in porcine ventricular myocytes (Verkerk et al., 2006).Thus, although the mechanism may be different, both acute and incorporated ω3-PUFAs shorten the cardiac action potential duration of many species (Kang, 1995; Macleod et al., 1998; Ander et al., 2004).

The lack of shortening of EPA + DHA in the ω3 group implies that saturation of the membrane with ω3-PUFAs in the ω3 myocytes prevents further shortening of the cardiac action potential. This suggests that the mechanism for the cardiac action potential shortening in the ω9 group is not the result of a direct ligand-like interaction with the ion channels per se, but rather that it depends on membrane composition. However, Xiao et al. (2001) showed that substitution of a single amino acid in the hH1α unit of the fast sodium current (INa) reduced the inhibitory effect of EPA on the current amplitude, suggesting direct interference between the fatty acid and the ion channel. However, other ligand gated ion channels that lack amino acid homology with voltage gated ion channel are also inhibited by acute administration of ω3-PUFAs (Leaf et al., 2002). Therefore, it has been suggested that fatty acids primarily alter membrane composition close to ion channels rather than that they directly interact with the ion channel protein (Lundbaek and Andersen, 1999). The incorporation of the long acyl chain of the fatty acid may compress the phospholipid bilayer resulting in a mismatch with the hydrophobic length of the transmembrane channel (Girshman et al., 1997). Compression or stretch by the long-chain fatty acids may alter the conformational state and conductance of ion channels (Lundbaek and Andersen, 1999).

The effect of acute free ω3-PUFAs in our study occurs within minutes, an observation that suggests a rapid uptake into the outer leaflet of the membrane in a protein-independent manner. Long-term exposure to ω3-PUFAs may involve membrane fatty acid transporters resulting in esterification into phospholipids (see for review Glatz et al., 2010) and diffusion to specific domains. Here, ω3-PUFAs may indeed alter many basic properties of cardiac membranes (Stillwell and Wassall, 2003). Apparently, the acute and long-term exposures of ω3-PUFAs to the cardiac membrane, likely through different processes, influence each other.

Data on plasma levels of ω3-PUFAs following dietary interventions are limited. Fish oil supplements (2 g EPA and 1.4 g DHA) for 5 weeks in menopausal woman resulted in an increase in plasma EPA and DHA up to 0.5–0.7 mmol/l (Higdon et al., 2000). To which extent these fatty acids are “free” to enter the interstitial space is unknown. Therefore, we measured free fatty acid levels of EPA and DHA in plasma samples of the SOFA trial (Brouwer et al., 2006; Den Ruijter et al., 2008). This trial included patients who were taking fish oil-2g/day for a median of 365 days. Their free ω3-PUFAs were in the range of 5.0–16.4 μmol/l. The rabbits in our study had free EPA and DHA levels comparable to those seen in fish oil supplemented patients (Table 1).

Harris et al. (2004) have reported EPA and DHA levels in human cardiac tissue up to 2.5% of total fatty acids (Harris et al., 2004). Billman et al. (2010) reported a strong dose-dependent effect of fish oil intake (from 1 to 4 g/day) on cardiac omega-3 index (from 4 to 7%) in dogs. Also in humans, the cardiac omega-3 status can be modified. Moreover, several research groups advocate the use of the omega-3 red blood cells (the omega-3 index) as a measure of a person’s cardiac omega-3 status (Harris et al., 2004; von Schacky and Harris, 2007). Although we did not measure effects in vivo, our data suggest that patients with a high cardiac omega-3 status should maintain their status by continuation of their life style. They may not benefit from a high(er) dose of fish oil supplementation as a kind of prophylactic antiarrhythmic therapy.

The authors wish to thank Jan. Zegers and Antoni. C. G. van Ginneken for kindly providing the data acquisition and analysis program, respectively, and Charly N.W. Belterman and Cees Schumacher for biotechnical assistance. This work was supported by the Netherlands Heart Foundation (grant# 2007-B019).

Copyright: © 2010 Den Ruijter, Verkerk and Coronel. This is an open-access article subject to an exclusive license agreement between the authors and the Frontiers Research Foundation, which permits unrestricted use, distribution, and reproduction in any medium, provided the original authors and source are credited.

The Effects of Omega-3 Polyunsaturated Fatty Acids on Cardiac Rhythm: Antiarrhythmic, Proarrhythmic, Both or Neither?