Acinar and ductal cells of the exocrine pancreas form a close functional unit. Although most studies contain data either on acinar or ductal cells, an increasing number of evidence highlights the importance of the pancreatic acinar-ductal functional unit. One of the best examples for this functional unit is the regulation of luminal pH by both cell types. Protons co-released during exocytosis from acini cause significant acidosis, whereas, bicarbonate secreted by ductal cells cause alkalization in the lumen. This suggests that the first and probably one of the most important role of bicarbonate secretion by pancreatic ductal cells is not only to neutralize the acid chyme entering into the duodenum from the stomach, but to neutralize acidic content secreted by acinar cells. To accomplish this role, it is more than likely that ductal cells have physiological sensing mechanisms which would allow them to regulate luminal pH. To date, four different classes of acid-sensing ion channels have been identified in the gastrointestinal tract (transient receptor potential ion channels, two-pore domain potassium channel, ionotropic purinoceptor and acid-sensing ion channel), however, none of these have been studied in pancreatic ductal cells. In this mini-review, we summarize our current knowledge of these channels and urge scientists to characterize ductal acid-sensing mechanisms and also to investigate the challenge of the acinar acid load on ductal cells.

Acinar and ductal cells in the exocrine pancreas form a close functional unit. Under physiological conditions, these cell types work together to maintain the integrity of the pancreas. One of the main roles of pancreatic ducts is to provide a structural framework for acinar and islet cells and to convey digestive enzymes from acinar cells to the duodenum. However, pancreatic ductal cells also secrete an alkaline fluid that may contain up to 140 mM NaHCO3 (Argent, 2006; Lee and Muallem, 2008). This latter function is considered to prevent the aggregation of digestive enzymes in the pancreatic lumen and to neutralize the acid chyme entering the duodenum from the stomach. Recently it has been highlighted that the alkaline fluid secreted by ductal cells affects the function of the acinar cells as well (Freedman et al., 2001). Freedman et al. (2001) showed that impaired ductal electrolyte and fluid secretion in cystic fibrosis transmembrane conductance regulator knock-out mice leads to acinar cell damage and to primary defect in membrane trafficking at the apical plasma membrane of acinar cells. They also showed that correction of the luminal pH reverses this membrane trafficking defect.

However, acinar cells have been shown to stimulate ductal bicarbonate secretion by releasing ATP (Haanes and Novak, 2010) and chloride (Ishiguro et al., 2002) during enzyme secretion. Most recently, Thorn’s workgroup showed that protons co-released during exocytosis cause significant acidosis in the lumen of the acini (Behrendorff et al., 2010). Physiological stimulation of exocytosis causes a decrease in the luminal pH of up to 1 pH unit. On the other hand, pathophysiological stimuli (supramaximal concentration of cerulein) enhanced and prolonged acidification of the lumen. The high proton concentration of the luminal fluid can disrupt intercellular junctional links which may be involved in the initiation or development of pancreatitis. These findings point out that the first and probably one of the most important roles of bicarbonate secretion is to neutralize the acid content secreted by acinar cells. This observation most likely explains the reason why the proximal small intercalated and intralobular ducts, which are the closest to the acini, are the main sites of bicarbonate secretion (Figure 1). 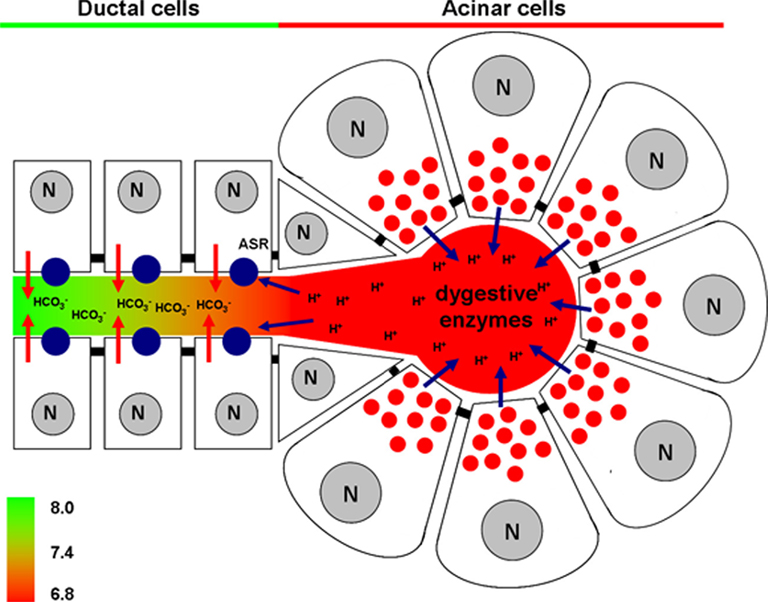 Figure 1. Changes of luminal pH in the exocrine pancreas during secretion. Under physiological conditions acinar cells secrete digestive enzymes and protons, the latter of which acidify the acinar lumen. In contrast, ductal cells secrete bicarbonate which will elevate the intraluminal pH. Our hypothesis is that protons may stimulate the ductal bicarbonate secretion via acid sensing receptors (ASR), which can elevate the pH in the ductal lumen setting the luminal pH to 8.0. (N, nucleus).

How Do Ductal Cells Sense the pH Changes Inside the Lumen?

The luminal proton, secreted by acinar cells may act as an autocrine messenger. The luminal acidification down-regulates the stimulus–secretion responses via decreased exocytic event numbers and accelerates recovery of cytosolic Ca2+ spikes (Behrendorff et al., 2010). However, it is also possible that increased luminal proton concentration acts as a paracrine messenger on pancreatic ductal cells. It is more than likely that the duct cells have a physiological sensing mechanism to regulate luminal pH (Figure 1).

To this date, four different classes of acid sensing ion channels have been identified in the gastrointestinal tract (Holzer, 2007): the transient receptor potential (TRP) ion channels, the two-pore domain potassium channel (KCNK), the ionotropic purinoceptor (P2X), and the acid-sensing ion channel (ASIC). The TRP channels have evolved as an ancient sensory apparatus of the cell, responding to temperature, touch, sound, osmolarity, pH, and various chemical messengers (Holzer, 2007). Among TRP channels, it is known that TRP vanilloid subtypes 1 and 4 (TRPV1 and TRPV4) can respond to acidosis (Clapham, 2003). However, it is unlikely that TRPV1 or 4 are involved in physiological acid sensing, since they are activated only if the extracellular pH is reduced to values below 6 (Holzer, 2004, 2007), which probably happens only under pathophysiological conditions (Behrendorff et al., 2010). The KCNK family members are blocked by very small increases in the extracellular concentration of H+ (Holzer, 2004); therefore, most probably they also do not play a significant role in physiological regulation of the ductal bicarbonate secretion. The ligand-gated P2X are assembled as homo- and heteromultimers of different subunits (P2X1–P2X7; Dunn et al., 2001). The activities of most P2X subunits are modulated by alterations of extracellular pH (Holzer, 2003). Although the potency of ATP to gate homomultimeric P2X1, P2X3, P2X4, P2X5, and P2X7 receptors is reduced by mild acidification, homomultimeric P2X2 receptors are sensitized to ATP (Dunn et al., 2001; North, 2002; Holzer, 2003). Since only P2X2 homomultimers and heteromultimers involving P2X2 (P2X1/2, P2X2/3, and P2X2/6) are sensitized by acid, it is primarily P2X2-containing purinoceptors that can function as indirect acid sensors in the presence of ATP (Holzer, 2003). The most likely candidate in pancreatic ductal acid sensing could be ASIC. This channel type was shown to be present in the HT29 intestinal epithelial cell line (Dong et al., 2011). This type of ion channel has six different subunits, but only five of them are sensitive to protons. The pH sensitivity of each subtype is different, but subtypes 1a and 3 can be stimulated once extracellular pH drops below 7 (Holzer, 2007), which can easily be reached during physiological enzyme secretion (Behrendorff et al., 2010). ASICs are primarily Na+ channels, but the 1a subunit also allows for the passage of Ca2+. Activation of ASIC usually elevates the cytosolic Ca2+ concentration which in turn can lead to bicarbonate secretion by pancreatic ductal cells (Dong et al., 2011). It is almost needless to say that the characterization of the ductal acid sensing mechanisms is crucially important to understanding the acinar-ductal cooperation in the pancreas.

The Importance of Extracellular pH in Pancreatitis

Both clinical and experimental observations suggest that acidosis may increase the risk of developing acute pancreatitis. The incidence of pancreatitis in patients with diabetic ketoacidosis is about 11% (Nair et al., 2000). In organic acidemias, some drugs and mitochondrial tRNA mutations are associated with mitochondrial dysfunction that cause lactic acidosis and are also linked to acute pancreatitis (Kishnani et al., 1996; Patel and Hedayati, 2006). Besides the clinical observations, experimental models also suggested the harmful effect of acidosis in pancreatitis. Reber et al. (1992) found that in cat pancreas, the basal parenchymal pH was about 7.35 and decreased to 7.25 after inducing chronic pancreatitis. In addition, ethanol exposure can decrease pancreatic blood flow by 60% and can cause a drop in pancreatic tissue extracellular pH (pHe) to 7.1. In an animal model of post-endoscopic retrograde cholangiopancreatography pancreatitis, disease development was affected by the pH of the contrast media (Noble et al., 2008). Contrast solution at pH 6.0 or 6.9 injected into the pancreatic ductal system increased pancreatic oedema, serum amylase activity, neutrophil infiltration, and histological damage. Notably, more damage was caused by pH 6.0 vs. pH 6.9, whereas, solutions of pH 7.3 injected at equal pressure caused only mild pancreatic injury. Quite recently Bhoomagoud et al. (2009) showed that lowering the pHe from 7.6 to 6.8 enhanced secretagogue-induced zymogen activation and injury in acinar cells in vitro, however the low pHe by itself had no effect on the acinar cells. They also showed that an acute acid load given in vivo enhanced cerulein-induced trypsinogen activation and pancreatic oedema. These findings also suggest that low pH environments might play an important role in the pathogenesis of acute pancreatitis.

The failure of pancreatic ductal bicarbonate secretion (i.e., the decrease of luminal pH) can increase the risk or lead to pancreatitis (Hegyi and Rakonczay, 2010; Hegyi et al., 2011). The decrease in luminal pH can contribute to the acidification of the extracellular environment. Recent studies suggest that toxic factors, such as bile acids (Venglovecz et al., 2008; Maléth et al., 2011) or ethanol (Yamamoto et al., 2003), can inhibit pancreatic ductal bicarbonate secretion, which acidifies the lumen of the ducts and slows down the washout of the digestive enzymes. This can lead to intraductal digestive enzyme activation and can speed up the development of the inflammation.

In summary, an increasing number of evidence highlights the importance of understanding the acinar–ductal functional unit. Hopefully, this mini review will stimulate researchers to investigate the physiology and pathophysiology of acinar-ductal cooperation more intensively.

Copyright: © 2011 Hegyi, Maléth, Venglovecz and Rakonczay. This is an open-access article subject to a non-exclusive license between the authors and Frontiers Media SA, which permits use, distribution and reproduction in other forums, provided the original authors and source are credited and other Frontiers conditions are complied with.