Glucose and long-chain fatty acids are the most important cardiac substrates. Both substrates are efficiently extracted from the interstitial space by substrate specific sarcolemmal transporters. GLUT4 is well-known to be the main cardiac glucose transporter. It is also well-established that GLUT4 translocation from recycling endosomes to the plasma membrane accounts for stimulation of cardiac glucose uptake upon physiological stimuli, especially increased contractile activity and increased circulating levels of insulin (Sevilla et al., 1997; Glatz et al., 2010). With respect to fatty acid uptake, the heart expresses several distinct fatty acid transporters, most notably CD36 and members of the FATP family (FATP1 and 6) (Doege and Stahl, 2006; Glatz et al., 2010). Similar to GLUT4, in the heart also CD36 translocates from intracellular stores to the sarcolemma upon insulin and contraction stimulation (Glatz et al., 2010). Importantly, in CD36-knockout mice, stimulus-induced fatty acid uptake was completely abrogated, emphasizing a key role of CD36 in the regulation of cardiac fatty acid fluxes (Habets et al., 2007). In contrast, the quantitative importance of the FATPs in cardiac fatty acid uptake is not yet clear.

We used cardiomyocytes from these heart/muscle-specific PKC-λ knockout mice to study (1) whether PKC-λ and PKC-ζ play similar roles in insulin-stimulated glucose and fatty acid uptake into cardiomyocytes from heart/muscle-specific PKC-λ knockout mice, and to study (2) the role of atypical PKCs in AMPK-mediated glucose and fatty acid uptake.

Embryonic stem cells containing a floxed PKC-λ allele (with loxP sites flanking exon 110-233) were used to generate C57Bl/6 mice with germline-transmitted floxed PKC-λ. These mice were crossed with mice harboring a muscle creatine kinase-driven Cre recombinase transgene to generate heterozygous and homozygous heart/muscle-specific PKC-λ knockout mice and various littermates (Farese et al., 2007). The mice were bred in the Muscle Research Centre, University of Copenhagen, according to the guidelines of that institution. After shipment to Maastricht, experiments were performed according to the guidelines of the Experimental Animal Committee of Maastricht University.

Isolation and Pre-Incubation of Mouse Cardiomyocytes

Pellets of stimulated cell suspensions were dissolved in sample buffer, as previously described (Habets et al., 2007), and subjected to SDS-polyacrylamide gel electrophoresis, followed by Western blotting for the detection of GLUT4, CD36, VAMP2 and GAPDH, and of phospho-AS160 (PAS antibody), phospho-ACC (Ser79), phospho-Akt (Ser473) by applying the antibodies according to the manufacturer's instructions.

For palmitate and deoxyglucose uptake, 0.5 ml of a mixture of [1−14C]palmitate/BSA complex and [1−3H]deoxyglucose was added to pre-incubated cell suspensions (final concentrations: palmitate, 100 μmol/l; deoxyglucose, 100 μmol/l; palmitate/BSA ratio 0.3). The rate of uptake of 14C-palmitate and of 3H-deoxyglucose in a 3-min incubation, i.e., within the initial uptake phase, was determined as previously described (Habets et al., 2007). The uptake was terminated by adding of an ice-cold stop solution containing 0.2 mmol/l phloretin, followed by washing the cells twice for 2 min at 45 g and assessing the radioactivity in the pellet.

All data are presented as means ± S.E.M. for the indicated number of cardiomyocyte preparations. Statistical difference between means was analyzed by the paired Student's t-test. P ≤ 0.05 was considered significant.

Figure 1. Expression of PKC-ζ, and expression and phosphorylation of total atypical PKC in hearts from wild-type and muscle-specific PKC-λ-knockout mice. Heart homogenates from wild-type (WT) and PKC-λ-knockout (KO) mice were used for PCR analysis of PKC-ζ (left graph) and Western detection of total atypical PKC expression and phosphorylation (middle and right graph). In case of Western detection, representative blots are displayed above each graph. Data are means ± SEM for six experiments carried out with different heart homogenates. *Significantly different from WT (P < 0.05).

Expression of GLUT4 and CD36 was similar in wild-type and PKC-λ knockout cardiomyocytes (Figure 2). This indicates that the potential capacity for fatty acid and glucose transport in cardiomyocytes is not altered due to heart/muscle-specific knockout of PKC-λ. 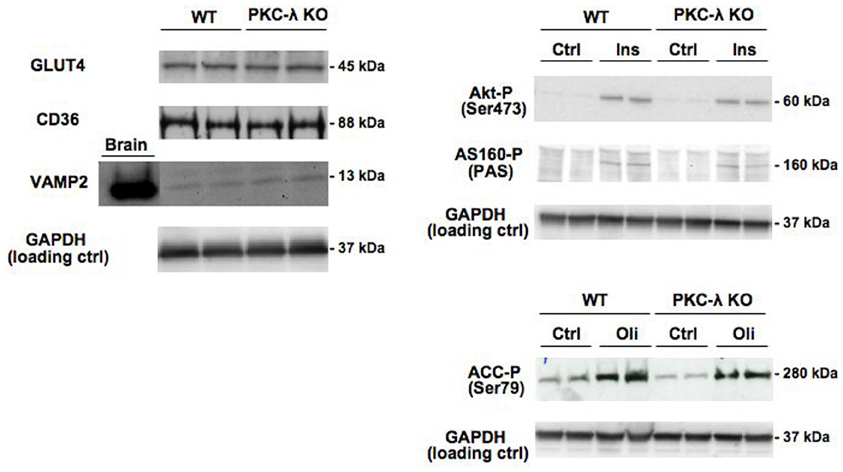 Figure 2. Expression of GLUT4, CD36, and VAMP2 in cardiomyocytes from wild-type and muscle-specific PKC-λ-knockout mice, and the effects of insulin and oligomycin treatment on phosphorylation of Akt, AS160, and ACC. Wild-type (WT) and PKC-λ-knockout (KO) cardiomyocytes were used to determine GLUT4, CD36, VAMP2, and GAPDH (loading control) expression, and after incubation for 20 min in the absence (Ctrl) or presence of 100 nM insulin (Ins) or 1 μM oligomycin (Oli) for assessment of phospho-Akt (Ser473), phospho-ACC (Ser79), and phospho-AS160 by Western blotting. In case of VAMP2, a sample from homogenized rat brain of identical protein content was used as a positive control on the expression of this protein. A representative Western blot is presented out of five experiments with different cardiomyocyte preparations.

VAMP2 has been reported to be a direct substrate of atypical PKCs, as shown in adipocytes (Braiman et al., 2001). Because VAMP2 is functioning as a v-SNARE in GLUT4 translocation in adipocytes (Olson et al., 1997) and muscle (Sevilla et al., 1997), an upregulation in VAMP2 expression could serve as a compensatory mechanism to maintain GLUT4 translocation. However, VAMP2 was not found to be upregulated in PKC-λ knockout cardiomyocytes (Figure 2), excluding the occurrence of this possible compensatory mechanism. Taken together, possible alterations in substrate uptake due to the ablation of PKC-λ in cardiomyocytes cannot be ascribed to compensatory changes in any of the parameters studied.

Effect of PKC-λ Ablation on Glucose and Fatty Acid Uptake 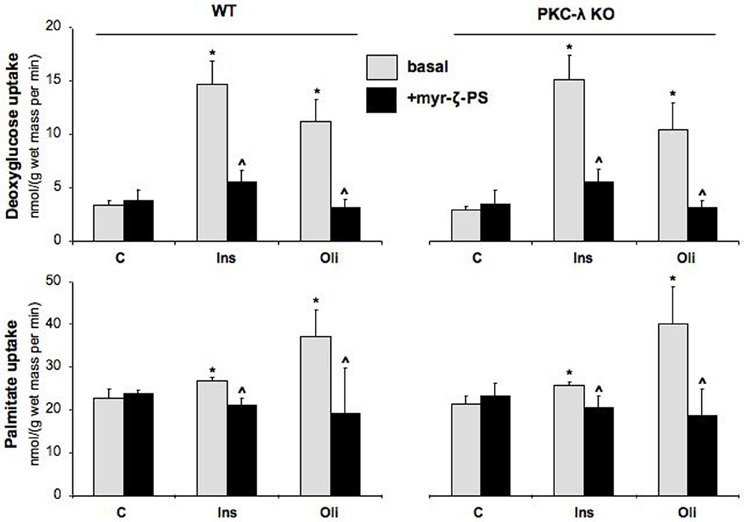 Figure 3. Effects of insulin and oligomycin stimulation on deoxyglucose and palmitate uptake in cardiomyocytes from wild-type and muscle-specific PKC-λ-knockout mice. Wild-type (WT) and PKC-λ-knockout cardiomyocytes were preincubated in the absence (basal) or presence of 50 μM myristoylated PKC-ζ pseudosubstrate (myr-ζ-PS), and subsequently incubated for 20 min in the absence (Ctrl) or presence of 100 nM insulin (Ins) or 1 μM oligomycin (Oli), whereafter uptake rates of 3H-deoxyglucose and 14C-palmitate were measured. Data are means ± SEM for six experiments carried out with different cardiomyocyte preparations. *Significantly different from Ctrl (P < 0.05). ^Significantly different from corresponding basal (P < 0.05).

Less research has been done to employ the myristoylated PKC-ζ pseudosubstrate in AMPK-mediated glucose uptake, and indeed this synthetic peptide revealed the involvement of atypical PKCs in this process, at least in L6 myotubes (Chen et al., 2002; Sajan et al., 2010). Hence, ours is the first study that shows that atypical PKCs are necessary for AMPK-stimulated glucose uptake into a cardiac cellular model system and for AMPK-stimulated fatty acid uptake into any cell type or tissue.

Earlier, we established in rat cardiomyocytes (Luiken et al., 2002) and in mouse cardiomyocytes (Habets et al., 2009) that enhancement of glucose uptake and fatty acid uptake upon insulin or AMPK stimulation is of similar magnitude as the increase in cell surface content of GLUT4 and of CD36, respectively, indicating that translocation of both transporters accounts for the increase in uptake of both substrates. Moreover, in the case of fatty acids, we have shown that the increase in uptake of this substrate in response to insulin stimulation (data not shown) or AMPK stimulation (Habets et al., 2009) is absent in cardiomyocytes from CD36 knockout mice, implicating the involvement of CD36 in insulin-stimulated and in AMPK-mediated fatty acid uptake. In addition, we have shown that inhibition of atypical PKCs by staurosporin completely blocks insulin-stimulated glucose and fatty acid uptake, and also insulin-stimulated GLUT4 and CD36 translocation (Luiken et al., 2009). Hence, it may be concluded that the mechanism of involvement of atypical PKCs in stimulation of glucose and fatty acid uptake encompasses the translocation of GLUT4 and CD36. 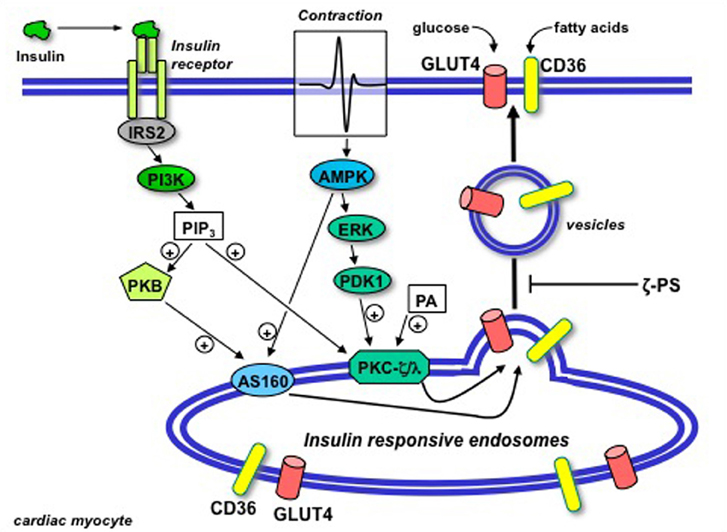 Figure 4. Schematic presentation of the putative permissive role of atypical protein kinase C (isoforms ζ/λ) in GLUT4 and CD36 translocation in the heart. Upon binding to its receptor at the cell surface, insulin sequentially activates insulin-receptor substrate 2 (IRS2) and PI3K, resulting in the production of PIP3. Beyond PI3K, the insulin signal is split into two parallel branches. PIP3 binds to both Akt/PKB and PKC-ζ/λ. In case of Akt/PKB this results in the activation and subsequent phosphorylation of AS160. In case of PKC-ζ/λ this does not result in further activation because the basally high levels of phosphatidic acid (PA) in the heart impose PKC-ζ/λ to be already bound to endosomal membranes in the absence of insulin treatment. Hence, PKC-ζ/λ maintains the endosomal membranes in a pre-active state, waiting for the insulin signal through activation of Akt/PKB and AS160 to complete the final stages in the budding of GLUT4- and CD36-containing vesicles for translocation to the sarcolemma. Upon contraction-induced activation of AMP-activated protein kinase (AMPK), a signaling cascade also involving ERK and PDK1, similarly will activate AS160 but not further activate PKC-ζ/λ. In agreement with the dependence of insulin-stimulated GLUT4- and CD36 translocation of PKC-ζ/λ, these processes will be subjected to inhibition by myristoylated PKC-ζ pseudosubstrate (ζ-PS). (Modified from Luiken et al., 2009).

Finally, in the healthy heart there is an optimal balance between glucose and fatty acid uptake in order to sustain proper mechanical function. In various cardiac diseases this substrate balance is disturbed, which could result in impaired functioning. Therapies aimed at normalization of cardiac substrate metabolism through selective translocation of either GLUT4 or CD36 have been proposed to protect the diseased heart against loss of function (Glatz et al., 2006). Therefore, it became of interest to search for signaling and trafficking proteins specifically dedicated to either GLUT4 or CD36 translocation, because these proteins would offer attractive targets to modulate substrate preference. However, atypical PKCs would not provide such target. First, atypical PKCs are similarly involved in the regulation of glucose uptake and fatty acid uptake by the heart, and therefore these PKC isoforms lack the ability to discriminate between both processes. Second, since PKCs do not present a rate-limiting step, a potential pharmacological activation or partial inhibition should have little, if any, effect on cardiac glucose and fatty acid fluxes.

This study was supported by the Netherlands Organisation for Health Research and Development (ZonMw grant 912-04-075), the European Community (Integrated Project LSHM-CT-2004-005272, Exgenesis), the Danish Medical Research Council, the Lundbeck Foundation, the Danish Ministry of Food, the Heart and Stroke Foundation of Ontario and the Natural Siences and Engineering Research Council of Canada (NSERC). Arend Bonen is the Canada Research Chair in Metabolism and Health.

Copyright © 2012 Habets, Luiken, Ouwens, Coumans, Vergouwe, Maarbjerg, Leitges, Bonen, Richter and Glatz. This is an open-access article distributed under the terms of the Creative Commons Attribution License, which permits use, distribution and reproduction in other forums, provided the original authors and source are credited and subject to any copyright notices concerning any third-party graphics etc.