Objectives and Background: Serum biomarkers have been proposed to reflect fibrosis of several human tissues, but their specific role in the detection of myocardial fibrosis has not been well-established. We studied the association between N-terminal propeptide of type I and III procollagen (PINP, PIIINP, respectively), galectin-3 (gal-3), soluble ST2 (ST2), and myocardial fibrosis measured by late gadolinium enhanced cardiac magnetic resonance imaging (LGE CMR) and their relation to left ventricular diastolic filling properties measured by tissue Doppler echocardiography (E/e') in patients with stable coronary artery disease (CAD).

Conclusions: Elevated serum levels of gal-3 reflect the degree of myocardial fibrosis assessed by LGE CMR. Gal-3, ST2, and PIIINP are also elevated in patients with impaired LV diastolic function, suggesting that these biomarkers are useful surrogates of structural and functional abnormality of the myocardium.

The aim of this study was to determine the association of fibrosis biomarkers and myocardial interstitial fibrosis measured by LGE CMR and their relation to left ventricular diastolic filling measured by tissue Doppler echocardiography in patients with stable coronary artery disease (CAD).

The concentrations of gal-3 and ST2 were determined from serum samples. Serum was prepared by allowing the blood to clot for 30 min followed by centrifugation at 2000 ×g for 10 min. The serum was stored at -20°C until analyzed. ST2 levels were analyzed using a sandwich, enzyme-linked immunosorbent assay (ELISA) (Human ST2/IL-1 R4 Quantikine ELISA, R&D Systems Inc., Minneapolis, MN) with a sensitivity of 5.1 pg/mL. Gal-3 levels in serum were determined by an enzyme-linked immunosorbent assay (ELISA) from BG Medicine (Waltham, MA, USA). The limit of detection (LoD) for the assay was 1.13 ng/mL (Christenson et al., 2010).

All continuous data are presented as mean ± standard deviation. IBM® SPSS® Statistics v. 21 (IBM Corp., Armonk, NY) was used to analyze all statistics. Because of the skewed distribution of the variables, no correlation co-efficient were analyzed. For the same reason and due to the small study population we tested differences between tertiles divided according to LGE T1 relaxation time and E/é. Oneway analysis of variance was used followed by post hoc Bonferroni test in comparisons between the tertiles. All results with p < 0.05 were considered statistically significant.

Table 1. Characteristics of patients divided according to the amount of fibrosis measured by magnetic resonance imaging. 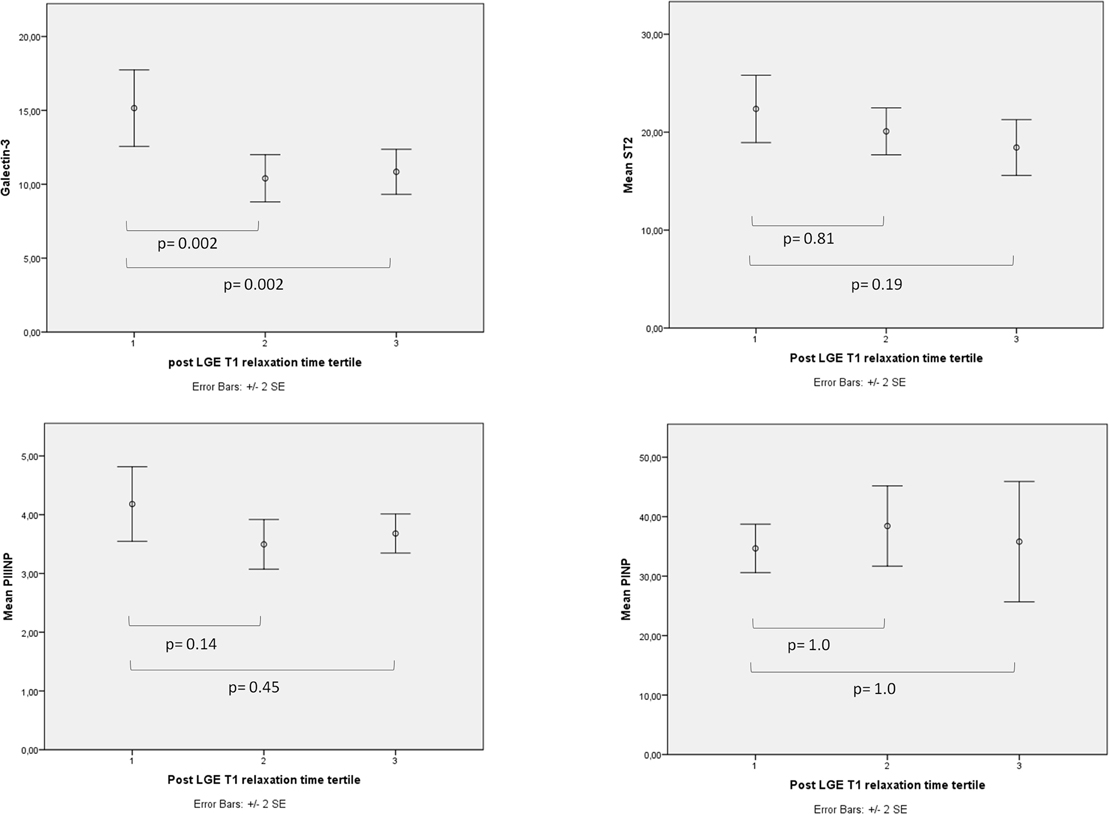 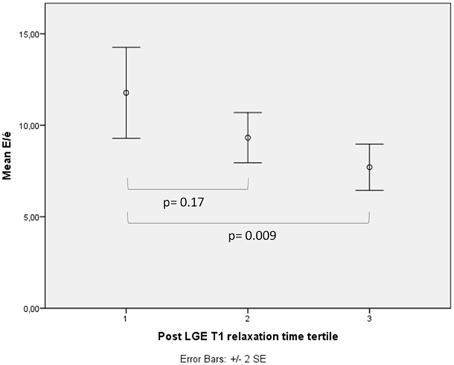 Gal-3 was the only serum biomarker that had a significant correlation to diffuse myocardial fibrosis estimated by LGE CMR T1 mapping in patients with stable CAD. Elevated levels of other biomarkers, such as ST2 and PIIINP, had no significant association to fibrosis, but these biomarkers were associated with impaired left ventricular filling assessed by tissue Doppler echocardiography. Furthermore, LGE T1 relaxation time was closely associated with E/é showing that diffuse myocardial fibrosis is an important determinant of cardiac diastolic function in patients with uncomplicated stable CAD. Myocardial fibrosis had no significant relationship with any demographic variable, left ventricular systolic function, severity of CAD (Syntax score), or any metabolic risk variable.

CMR has emerged as a non-invasive imaging method for focal fibrosis but it also allows the assessment of diffuse interstitial fibrosis. Isolated post-contrast T1 relaxation time has been shown to have a strong correlation with histologically confirmed myocardial fibrosis in small studies involving patients with heart failure (Iles et al., 2008; Miller et al., 2013). T1 relaxation time has also some correlation with echocardiographic markers of impaired diastolic function such as septal E' and E/é in patients with diabetes but no underlying CAD as a marker of so-called diabetic cardiomyopathy (Jellis et al., 2011; Ng et al., 2012). One study including patients with ischemic cardiomyopathy also showed a correlation between E/é and visually estimated LGE (Raman et al., 2009). Isolated post-contrast T1 relaxation time was also the only variable that correlated with invasively measured LV stiffness after multivariate analysis in cardiac transplant recipients (Ellims et al., 2014).

Previous studies using T1 relaxation time analysis to estimate the amount of fibrosis have excluded patients with stable uncomplicated CAD. In our study we were able to show that also in patients with CAD, isolated post-contrast T1 relaxation time correlates with diastolic filling properties, even when areas of visible LGE where excluded from analysis. In post hoc analysis we could show that the patients in the tertile with the highest amount of interstitial fibrosis in CMR had significantly higher E/é-values than the tertile with least fibrosis.

Myocardial collagen tissue consists mostly of collagen type I and III. Procollagen N-terminal peptides, which can be measured from blood samples, have been used as surrogates of myocardial fibrosis. Nevertheless there has been some controversial evidence of PINP and PIIINP as biomarkers of collagen biosynthesis and as predictors of outcome of heart failure patients. Gal-3 and ST2 are more novel biomarkers of fibrosis. Gal-3 is an important mediator that induces fibroblasts to proliferate and deposit collagen, which contributes to myocardial fibrosis and remodeling. ST2 is a member of the interleukin receptor family and the gene expression of ST2 is upregulated in fibroblasts and cardiomyocytes subjected to mechanical stress. ST2 also prevents the IL-33 effects in reducing fibrosis and hypertrophy. GAL-3 (Lok et al., 2010, 2013; De Boer et al., 2011; Ho et al., 2012; Lopez-Andrés et al., 2012) and ST2 (Pascual-Figal et al., 2009; Manzano-Fernandez et al., 2011) have been shown to have predictive value for adverse cardiac events and mortality especially in patients with heart failure and ST2 also in patients after acute coronary syndrome (Eggers et al., 2010).

In this study we found a correlation between the LGE T1 relaxation time and GAL-3, but the other biomarkers of fibrosis did not have a significant correlation to myocardial fibrosis measured by LGE CMR. One of the reasons for these observations might be that ST2 concentrations are thought to raise as a result of increased myocardial strain whereas gal-3 can be seen as an initiator of collagen deposition and therefore as a better surrogate of incipient or existing interstitial fibrosis even without systolic or diastolic impairment.

In the tertile analysis divided according to diastolic function i.e., E/é-values, we were able to show significant differences in the biomarker levels of Gal-3, ST2, and PIIINP between the most marked diastolic impairment tertile compared to the other two tertiles. These data provide evidence of the utility of these serum biomarkers in the rapid diagnosis of cardiac diastolic dysfunction, but these findings need confirmation in larger patient samples.

The relatively small sample size of the study prevents definite conclusions regarding the lack of correlation between some of the biomarkers, such ST2 and PIIINP, and myocardial fibrosis measured by CMR. Measurement of relaxation time T1 by the LGE method may also have some limitations in terms of reliable quantification of diffuse myocardial fibrosis. Despite these limitations, we feel that the present findings provide some useful information about the value of serum biomarkers as predictors of both myocardial fibrosis and cardiac diastolic properties.

In patients with uncomplicated CAD, serum biomarkers, especially gal-3, are associated with diffuse interstitial fibrosis imaged with cardiac MRI. Additionally, these biomarkers are associated with echocardiographically measured impaired LV diastolic filling properties. These results suggest that LV interstitial fibrosis plays an important role in impaired diastolic function among CAD patients and the level of cardiac diastolic dysfunction can be assessed with serum biomarkers of fibrosis.

Copyright © 2015 Lepojärvi, Piira, Pääkkö, Lammentausta, Risteli, Miettinen, Perkiömäki, Huikuri and Junttila. This is an open-access article distributed under the terms of the Creative Commons Attribution License (CC BY). The use, distribution or reproduction in other forums is permitted, provided the original author(s) or licensor are credited and that the original publication in this journal is cited, in accordance with accepted academic practice. No use, distribution or reproduction is permitted which does not comply with these terms.