Aging can increase both blood pressure (BP) and arterial stiffness, both of which are major risk factors for cardiovascular disease (Blacher et al., 1999; O'Rourke, 1999). Central BP, including aortic or carotid pressures, reportedly has a greater influence on cardiovascular disease than dose peripheral BP (Roman et al., 2007). In addition, the pulsatile component of central arterial pressure (e.g., pulse pressure) is strongly correlated with cardiovascular events and outcome than is systolic pressure (Benetos et al., 1998; Safar et al., 2002; Roman et al., 2007). Central aortic pulse pressure can be subdivided into amplitude of the first systolic peak and augmentation pressure. The augmentation pressure is influenced by aging, body height, and arterial stiffness (Nichols and Edwards, 2001; Nichols and O'Rourke, 2005). In women, the increase in arterial stiffness with age accelerates around menopause (Tomiyama et al., 2003). In addition, the increase in central pulse pressure in women is much greater than that in men (McEniery et al., 2005). Therefore, the management of central BP, especially pulse pressure and argumentation pressure, may be of great pathophysiological importance in postmenopausal women.

Nine sedentary postmenopausal women (52-66 years old) participated in the study. The subjects were nonsmokers, non-obese, and free of cardiovascular disease, as assessed by medical history. None of the subjects were taking medications affecting the cardiovascular system or hormone replacement therapy. All potential risks associated with the study were explained to the subjects, and they gave written informed consent for participation in the study. All procedures were reviewed and approved by the ethical committee of the University of Tsukuba.

All 9 subjects completed an aerobic exercise training regimen. Before and after aerobic exercise training, each subject performed an acute exercise test that consisted of a 30-min aerobic cycling exercise at the intensity of the individual's ventilatory threshould (VT). All participants were at least 3 h postprandial, and did not consume caffeine and alcohol for 12-h and strenuous exercise for 24 h. We measured brachial BP, central BP and heart rate (HR) before and 30 and 60 min after the single bout of exercise. At least 2 days before the acute exercise test, VT and blood chemistries were measured after overnight fast. All measurements were performed at a constant room temperature (24-26°C).

VT was measured during the incremental cycle ergometer exercise by using online computer-assisted circuit spirometry (AE300S; Minato Medical Science, Osaka, Japan). All subjects performed a symptom-limited cycling exercise test (after a 2 min warm-up at 20 W, followed by 10 W increases every min) until they felt exhaustion or reached their age predicted maximal HR. The peak oxygen consumption (VO2peak) was defined at the highest value recorded during the test. Each individual VT was calculated by using regression analysis of the slopes of carbon dioxide production, oxygen uptake and the minute ventilation plot.

The subjects underwent aerobic exercise training 4-6 days per week (three supervised sessions and additional home-based sessions) for a total 12 weeks (Akazawa et al., 2012). Initially, the subjects performed cycling and walking sessions for 30 min/day at a relatively low intensity (60% of their individually determined maximal HR). As their exercise tolerance improved, the intensity and duration of aerobic exercise was increased to 40–60 min/day at an intensity of 70-80% of the maximal HR.

Before and after the exercise training program, the subjects performed a steady-state exercise test at their individual VT for 30 min using an electrically braked cycle ergometer (75XLIII; Combi Welness, Tokyo, Japan). An investigator monitored the subject's working load, oxygen uptake, heart rare, and rating of perceived exertion (RPE) during exercise and supervised each subject to perform the cycling exercise around the target intensities at 60 rpm.

Data are expressed as mean ± SE. Student's t-test for paired data was used to evaluate the difference in the body mass, blood chemistry, VT, and VO2peak at test and oxygen uptake, heart rate, and RPE during a single bout of exercise before and after exercise training. A two-way analysis of variance with repeated measures was performed to identify an interaction or main effect. A Dunnet post hoc test was used, when indicated for a significant main effect or interaction. Univariable correlation analyses were used to determine the relations between variables of interest. Statistical significance was set a priori at P < 0.05 for all comparisons.

There were no significant differences in measurement of body mass, triglyceride and blood glucose between before and after the 12-week exercise training regimen (Table 1). However, after the regimen, total cholesterol was significantly decreased and individual VT and VO2peak were significantly increased (Table 1). 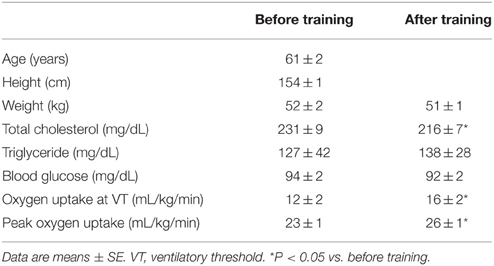 Table 1. Subjects characteristics before and after exercise training. 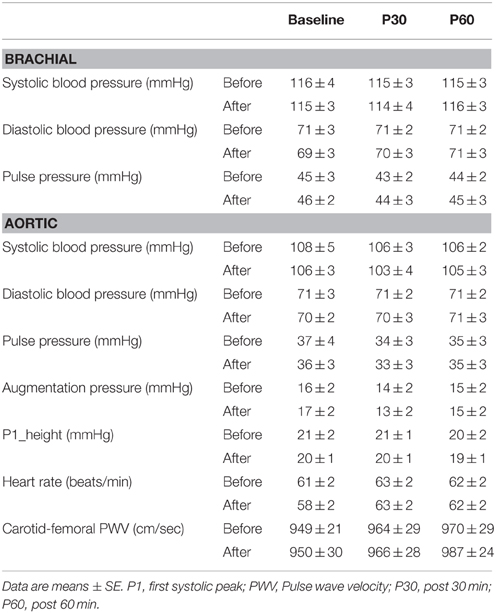 Table 3. Hemodynamics responses to a single bout exercise before and after training. 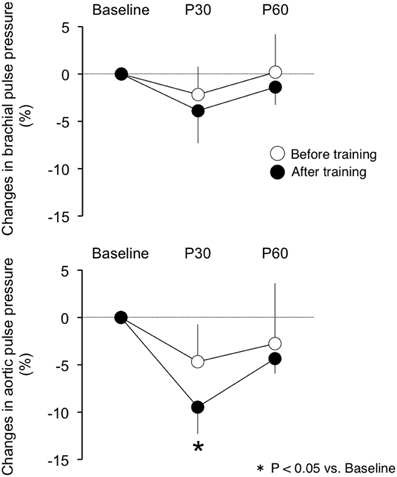 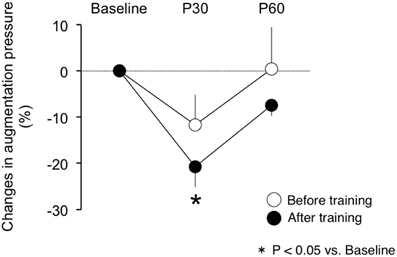 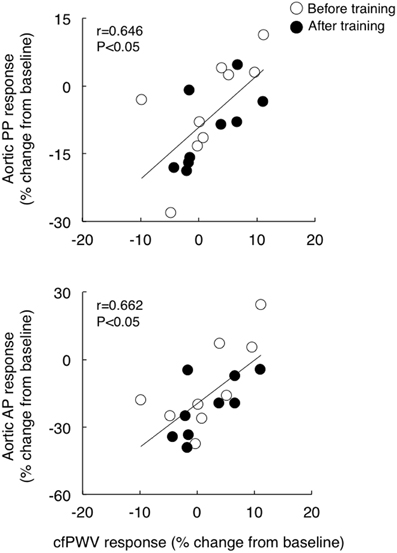 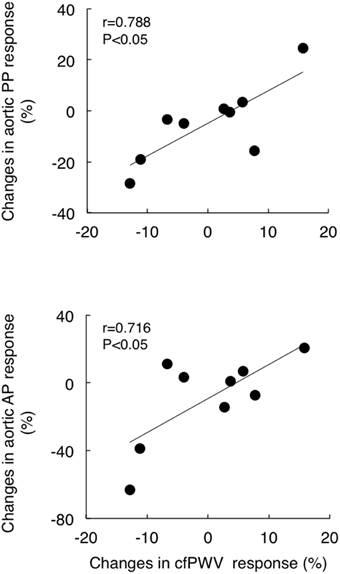 Figure 4. The relations between training-induced change (from pre- to post-training) in post-exercise response (from the baseline to post 30 min) of carotid-femoral pulse wave velocity (cfPWV) and corresponding changes in aortic pulse pressure (PP, top) and augmentation pressure (AP, bottom) response.

A transient reduction in brachial BP after acute aerobic exercise is reportedly observed in normotensive and hypertensive individuals (Halliwill, 2001; MacDonald, 2002). However, little is known about the central BP response to acute aerobic exercise. We recently reported a study that showed that the aortic pulse pressure decreased with moderate intensity exercise in a group of young healthy men (Sugawara et al., 2015). In the present study, we identified that postmenopausal women exhibited a reduction of aortic pulse pressure following a single bout of aerobic exercise without lowering brachial pulse pressure only after a 12-week training regimen. The present study develops this notion for the aging population. In the present study, the exercise work rate, oxygen consumption, and heart rate during a single bout exercise was increased after exercise training regimen. But, the increases in exercise intensity were not correlated with the central blood pressure response to acute exercise. Thus, it seems that the decrease in aortic blood pressure following acute exercise may be contributed to other than increase in exercise work volume and/or intensity.

We could speculate several possibilities regarding the mechanism responsible for decreased augmentation pressure in postmenopausal women. Regular endurance training improves endothelial function and capacity of dilation in trained vascular beds in the aging individual (Taddei et al., 2000). Based on the traditional concept that central arterial pressure is comprised of the incident wave (generated by left ventricle) and the reflected wave (emanated from points of impedance mismatch in the lower body) (Nichols and O'Rourke, 2005), the improved vasodilatory function in legs could buffer the incident wave effectively and attenuate the reflected wave. Alternatively, recent studies propose that aortic pressure is affected by, not only the aforementioned components, but also by the reservoir pressure (Wang et al., 2003; Davies et al., 2010). The arterial reservoir pressure is associated with the volume of blood stored in the aorta; it depends on the buffering capacity of the aorta, especially the proximal region (i.e., the ascending aorta and aortic arch). If this emerging idea is true, the ameliorated reservoir function of proximal aorta might be associated with the diminished aortic pressure augmentation. In this study, although cfPWV was not improved by the exercise training, cfPWV mainly reflects pulse wave velocity along the descending aorta and does not cover the ascending aorta and aortic arch.

In the present study, exercise training was found to slightly decrease brachial and central BP at baseline; however, an overall decrease in BP did not reach statistical significance. A meta-analysis had reported that exercise training decreases brachial systolic and diastolic BP by about 3-4 mmHg and 2-3 mmHg, respectively (Kelley and Sharpe Kelley, 2001). On the other hand, the effects of exercise training on central BP are not yet consistent. Laskey et al. (2013) reported that a 20-week exercise rehabilitation program decreased central aortic systolic pressure and pulse pressure at rest in patients with coronary heart disease. However, we and other investigators have shown that aerobic exercise training did not change central aortic hemodynamics in middle-aged and older populations (Tanaka et al., 2002; Sugawara et al., 2006, 2012). These inconsistent results may, in part, be due to the differences in exercise training protocols or subject characteristics among studies. Further studies are needed to clarify the effects of exercise training on central arterial BP at rest.

A number of studies have showed that aerobic exercise training decreases arterial stiffness (Montero et al., 2014). On the other hand, in the present study, we cannot observe the significant change in pulse wave velocity after 12-week training. It should be noted that several studies demonstrated that exercise training did not affect cfPWV in healthy postmenopausal women (Seals et al., 2001; Sugawara et al., 2012). It is likely that elderly women show less response of training effects. Interestingly, Hayashi et al. (2008) suggested that habitual exercise activity decreases arterial stiffness in individual with TC or CC genotype of estrogen receptor-α, there is no significant effect of exercise on arterial stiffness in individual with TT genotype. These results suggest that training efficiency on arterial stiffness might be affected gene polymorphism. However, we could not clarify the precise mechanisms because this was not mechanistic study. The lack of the control group was also a limitation of the study. Randomized controlled trial study is warranted in future study.

In conclusion, we demonstrated that a single 30-min bout of moderate-intensity cycling did not induce a significant change in central aortic pressure in postmenopausal women; but, after a 12-week period of consistent aerobic training, a cycling exercise at relatively similar intensity evoked a significant reduction of aortic augmentation pressure and pulse pressure. These findings suggest that regular aerobic exercise training may improve the blunted central hemodynamic response to an acute aerobic exercise bout in postmenopausal women.

This study was supported by Grants-in-Aid for Scientific Research from the Ministry of Education, Culture, Sports, Science, and Technology of Japan (24590654).

Copyright © 2015 Akazawa, Ra, Sugawara and Maeda. This is an open-access article distributed under the terms of the Creative Commons Attribution License (CC BY). The use, distribution or reproduction in other forums is permitted, provided the original author(s) or licensor are credited and that the original publication in this journal is cited, in accordance with accepted academic practice. No use, distribution or reproduction is permitted which does not comply with these terms.