Methods: In 11 subjects before and after 6 days at 4350 m, we performed multiparametric magnetic resonance investigations including anatomical, apparent diffusion coefficient and arterial spin labeling sequences.

Conclusions: These data demonstrate white matter alterations after several days at high altitude when subjects are asymptomatic that may represent the normal brain response to prolonged high altitude exposure.

In the present study, we aimed to assess changes in brain volume, ADC, and ONSD following several days of high altitude exposure, when symptoms of AMS have disappeared (as opposed to previous studies having investigated cerebral subedema and changes in brain volume within the first 24 h) but when increased cerebral blood flow is still present (Villien et al., 2013). We hypothesized that WM volume would be increased together with increased ADC and reduced fractional anisotropy but unchanged ONSD (since we expected intracranial pressure and AMS symptoms to be normalized after 6 days at altitude), which would characterize the normal brain response to prolonged hypobaric hypoxic exposure.

Eleven healthy male subjects (28 ± 8 years old) were recruited to participate to this study and provided written informed consent. Participants were recreational climbers, taking no medication, and having no history of cardiovascular, cerebrovascular and respiratory diseases. Their altitude of residence was < 1000 m (200–900 m), they were not acclimatized to high altitude (no night above 1500 m or sojourn above 2500 m of altitude over the past 3 months) and received no treatment to prevent acute mountain sickness. The study was approved by the local ethics committee and performed according to the Declaration of Helsinki (registration number: RCB2011-A00071-40, ClinicalTrials.gov ID: NCT01565603).

Magnetic resonance imaging examinations including volumetric, DWI, and arterial spin labeling sequences were performed in Grenoble (212 m) before and within 6 h after returning from 6 days at 4350 m of altitude (Observatoire Vallot, Mont Blanc, Chamonix, France). Subjects underwent helicopter transport lasting for 10 min between the valley and high altitude (4350 m). They remained for 6 days in the Observatoire Vallot, without further ascent, and without performing any climbing or prolonged physical activities. They kept their usual diet and slept for at least 7 h per night. Because 11 subjects could not be evaluated simultaneously during and immediately after the altitude stay, the experiment was performed over 2 weeks, a subgroup of 5 (or 6) subjects being exposed to high altitude and investigated according to the same protocol during each week. Data regarding arterial spin labeling have been previously reported (Villien et al., 2013).

Before and after the altitude stay, magnetic resonance images were acquired using a whole body scanner at 3 Tesla (Philips Achieva 3.0T TX, Best, Netherlands) equipped with a 32-channel head receive array. The following sequences were applied:

ADC and fractional anisotropy maps were computed from the eigenvalues of the diffusion tensor as estimated by FSL, after correction for eddy currents and affine motion (FSL's “eddy_correct” tool) and masking (mask extracted from b = 0 image using FSL's “bet” tool). These maps were then coregistered with the corresponding T1 images. WM and GM masks obtained from segmentation of T1 images were used to compute individual WM or GM ADC and fractional anisotropy maps.

ONSD was assessed according to Geeraerts et al. (2008). Briefly, T1-weighted magnetic resonance imaging was used to measure ONSD in an axis perpendicular to the optic nerve, 3 mm behind the globe using an electronic caliper (Figure 1). Three consecutive measurements were done bilaterally by the same experimenter (PC) blinded for experimental conditions (before-after altitude). ONSD was not available in three subjects due to excessive head motion and technical issue. 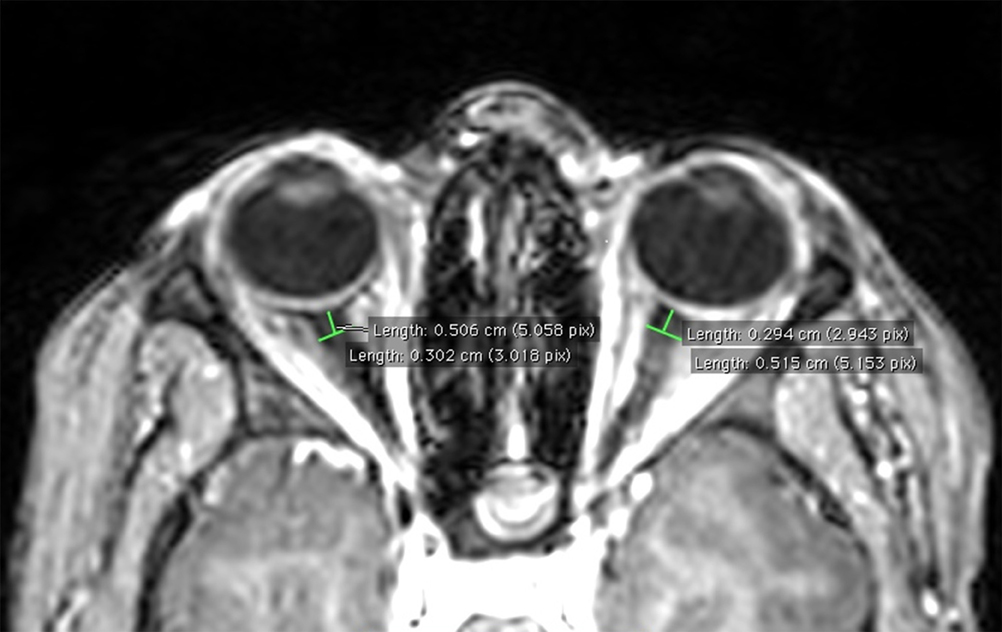 All statistical procedures were completed on Statistica version 10 (Statsoft, Tulsa, OK, USA). The Wilcoxon test was used to compare values before and after altitude exposure. Relationships between magnetic resonance imaging parameters were evaluated by Spearman correlation coefficient (rho). An alpha level of 0.05 was used as the cut-off for significance. All data are presented as mean values ± SD.

Figure 2. Gray and white matter and cerebrospinal fluid (CSF) volumes before and after 6 days at 4350 m [(A), absolute values; (B), before-after changes]. Data points are means ± SD, boxes are 95% confidence intervals. *Significant difference between before and after (p < 0.01). 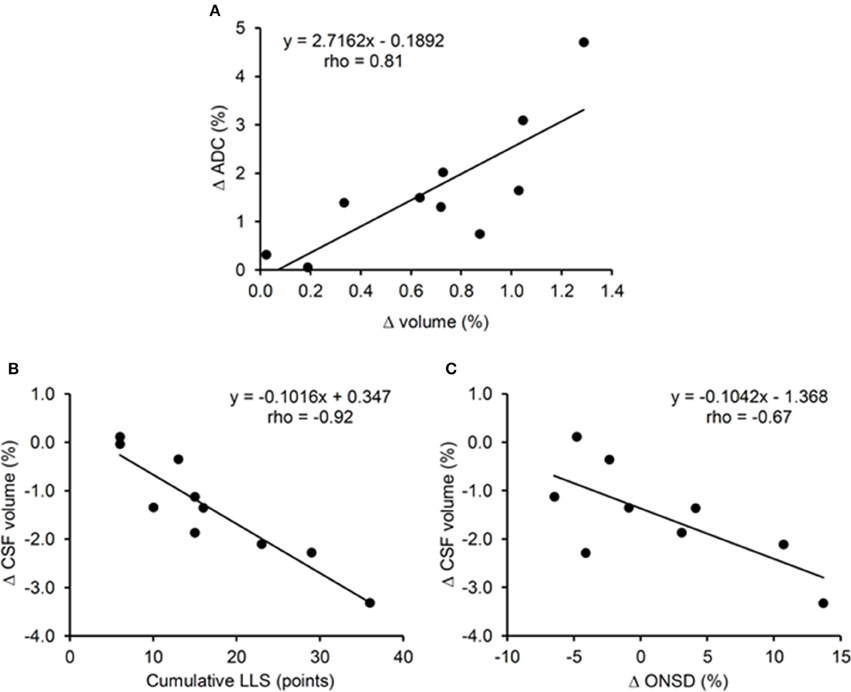 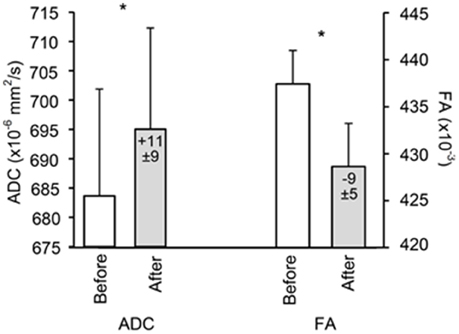 Figure 4. White matter apparent diffusion coefficient (ADC) and fractional anisotropy (FA) before and after 6 days at 4350 m. Values in the bars indicate difference compared to before altitude. Data points are means ± SD. *Significant difference between before and after (p < 0.01). 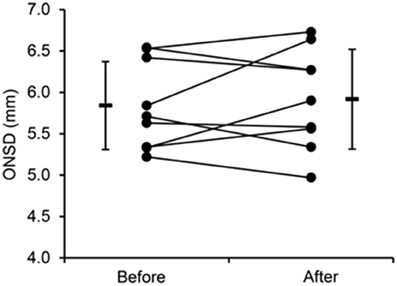 Figure 5. Individual and mean values of optic nerve sheath diameter (ONSD) before and after 6 days at 4350 m.

The present results suggest that prolonged high altitude exposure induces brain parenchyma changes specifically in WM characterized by significant increases in volume and ADC, fractional anisotropy reduction, while cerebral blood flow was enhanced in both WM and GM. Concomitantly, CSF volume was significantly reduced while unchanged ONSD did not support a significant increase in intracranial pressure at the group level. These data demonstrate for the first time that cerebral morphometric changes previously reported after few hours of hypoxia are still present after a prolonged altitude exposure when subjects become acclimatized and do no report AMS symptoms anymore.

The significant increase in WM volume observed in all subjects of the present study is in accordance with previous results from our laboratory following shorter (11 h) hypoxic exposure as well as with previous results from the literature (Hackett et al., 1998; Schoonman et al., 2008; Zhang et al., 2012). Conversely, other results report changes in volume or diffusion in the GM only (Morocz et al., 2001; Lawley et al., 2014). The reason for these discrepancies is unclear but WM may be more sensitive to vasogenic edema because of smaller density and therefore less resistance to invasion by fluid (Fishman, 1975; Klatzo, 1987; Hackett et al., 1998). The concomitant increase in WM volume and ADC and the correlation between both changes (Figure 3A) suggest that an increase in WM extracellular water may be associated with the increased WM volume. The reduction in WM fractional anisotropy further supports increased WM extracellular water after altitude exposure.

An important specificity of the present study is that magnetic resonance imaging measurements were performed after 6 days at high altitude when symptoms of AMS disappeared as opposed to previous studies of cerebral changes within the first 24 h of hypoxic exposure. The persistence of increased WM volume and ADC and reduced fractional anisotropy indicates these cerebral changes are independent of AMS and may represent normal responses to high altitude as previously observed in asymptomatic subjects (Kallenberg et al., 2007; Hunt et al., 2013). Alternatively, it may be suggested that these WM volume and diffusion changes represent mechanisms responsible for symptoms during the first hours at high altitude which persist but have been compensated after several days at high altitude. Hence, since no significant change in total brain volume was observed, it can be suggested that the increase in WM volume was buffered by the reduction in CSF volume (Figure 2). The correlation between changes in CSF volume and cumulative Lake Louise score (Figure 3B) may suggest that the later mechanism was particularly required in subjects with the greatest symptoms. As a consequence, intracranial pressure might be unchanged after 6 days of high altitude exposure, explaining the absence of AMS symptoms including headache, as opposed to the first hours at altitude where increased parenchyma volume may be associated with increased intracranial pressure and symptoms (Lawley et al., 2014).

By investigating cerebral changes with multiparametric magnetic resonance imaging after several days of high altitude exposure, the present study demonstrated significant cerebral morphometric changes in subjects not reporting AMS symptoms anymore. Hence, increased WM volume and diffusion (indicating vasogenic subedema) as well as reduced CSF volume and unchanged ONSD (suggesting no intracranial hypertension) may represent the normal brain response to high-altitude hypoxia. AMS symptoms reported over the first hours at high altitude may nevertheless be induced by some of these mechanisms which might be compensated later on with acclimatization. Further multiparametric magnetic resonance imaging investigations are required to clarify the kinetic of brain structural alterations and interindividual differences regarding symptoms during acute and prolonged high altitude exposure.

We thank all the subjects for participating to this study, David Gay and Meryck Jean for technical assistance, the iRMaGe platform and the Rhône-Alpes Region for financial support.

Copyright © 2016 Verges, Rupp, Villien, Lamalle, Troprés, Poquet, Warnking, Estève, Bouzat and Krainik. This is an open-access article distributed under the terms of the Creative Commons Attribution License (CC BY). The use, distribution or reproduction in other forums is permitted, provided the original author(s) or licensor are credited and that the original publication in this journal is cited, in accordance with accepted academic practice. No use, distribution or reproduction is permitted which does not comply with these terms.