Forty patients with CAD and a similar number with CSX were recruited to the study from Cardiac Catheterization Center in El-Shaab hospital, Khartoum, Sudan. Diagnoses of CAD and CSX were based on results of coronary angiograms. Patients with stenosis/stenoses in half (or more) of the caliber of one (or more) major coronary artery/arteries were diagnosed as CAD (Mohareb et al., 2015). Alternatively, subjects with typical chest pain, positive cardiac stress test and normal coronary angiography were considered as CSX (Lee et al., 2015). All patients underwent routine echocardiography before coronary angiography. Patients with cardiomyopathy, congenital or valvular heart diseases were excluded from both groups of the study.

QT was measured from the start of the QRS complex to the end of T wave (if termination of T wave was clearly identified) or the nadir between the U and T-waves (if U wave was obvious). Using BETR software, the maximum (Max QT), minimum (Min QT), and average QT intervals of all leads were measured in milliseconds (ms).

QTc is QT interval adjusted for the possible influences of heart rate. QTc was measured using Bazett's formula (). Same like QT intervals, the maximum (Max QTc), minimum (Min QTc), and average QTc intervals of all leads were measured in ms.

QTd was estimated by the formula: QTd = Max QT − Min QT in any of the ECG leads. Using BETR software, maximum (Max QTd), and average QTd were measured from all leads.

QTcd was estimated by the formula: QTcd = Max QTc − Min QTc in any of the ECG leads. Same like QTd, maximum (Max QTcd), and average QTc dispersion were measured from all leads.

QTdR was estimated by the formula: QTdR = QTd×100/RR, where RR is the period between two successive R waves. QTdR was expressed as percentage.

JTd was estimated by the formula: JTd = Max JT − Min JT, where Max JT and Min JT were the maximum and minimum JT interval respectively. JT interval was measured from the J-point (i.e., the end of QRS) and the end of T wave (if T wave had clearly identified termination) or the nadir between the U and T-waves (if U wave was obvious).

The ethical clearance of this study was approved by the ethics review committee at Faculty of Medicine, Khartoum University, Sudan. All studied subjects signed a written consent before being enrolled in the study.

The basic characteristics of the studied groups are given in Table 1. 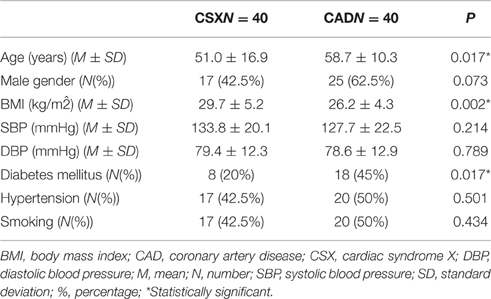 Table 1. Characteristics of the studied CSX and CAD patients.

Table 3. Comparisons of QT derived values of CSX and CAD patients with the cutoff reference values.

The present results revealed four main findings: firstly, QT and QTc values were comparable in CAD and CSX patients and confined to the normal physiological range in either group. Secondly, QTd, QTcd, and AdQTd values were not statistically different between CAD and CSX patients; however, these measurements exceeded the upper limit of normal ranges in either group. Thirdly, JTd was higher in CSX subjects compared with CAD patients but failed to achieve similar result when correcting JT for variations in heart rate (JTcd). Lastly, JTd and JTcd were both significantly above reference values in CSX but not CAD patients.

The present findings are comparable with earlier reports (Higham et al., 1995; Bogun et al., 1996; Cin et al., 1997; Tomkiewicz-Pajak et al., 2001; Yilmaz et al., 2006; Alici et al., 2011; Lee et al., 2015; Mohareb et al., 2015), although QT-derived parameters evaluated in previous studies are generally less comprehensive compared to our study. Alici et al. (2011) compared components of QT and QTd of 66 patients with CSX with a control group of 39 patients with typical angina, normal coronary angiographies but negative exercise treadmill testing (ETT). Results revealed comparable Max QT, Min QT and QTd in CSX and the control group at rest. However, these measurements were significantly higher in CSX subjects than in the control group during exercise. In addition, ST segments were significantly more depressed in CSX patients with QTd = 60 ms than those with QTd < 60 ms. In another study, QTc and QTcd were measured in 20 women with CAD, 19 women with CSX and 14 healthy control women at rest and during exercise (Tomkiewicz-Pajak et al., 2001). There were no significant differences in QTd between different studied groups at rest. In contrast, QTcd was significantly greater in CAD and CSX than in healthy control group, both at rest and during exercise. The study suggested that QTd and QTcd are not effective tools to differentiate between women with CAD from those with CAD. In a comparable study, Lee and his colleagues assessed effects of postural changes on QTd in patients with CAD and CSX (Lee et al., 2015). According to Lee et al, there were significant differences in QTd or QTcd between CAD and CSX on upright standing, but not at baseline or exercise. Lee et al concluded that CSX patients had a higher QTcd in response to standing from the supine position probably due to enhanced sympathetic activity. Based on the results of the three studies stated above, it is evident the values of QTd and QTcd tend to be comparable, but equally higher in either CAD or CSX patients compared with the healthy controls. Our results give further support for this hypothesis because comparable QTd and QTcd were demonstrated in CAD or CSX patients, yet both measurements were above the upper limit of normal.

Studies assessing other components of ventricular repolarization like AdQTd, QTdR, JTd, and JTcd are scarce and mostly targeted CAD rather than CSX patients. To our knowledge, the present study is the first to explore these parameters in CSX patients. Our results demonstrate comparable AdQTd, QTdR, and JTcd in CSX and CAD patients; however, JTd was greater in the first group. The present data also demonstrated higher JTd and JTcd in CSX compared to expected reference values; nonetheless, the studied CAD patients failed to show the same trend. These findings do agree with many previous studies (Furniss and Campbell, 1995; Macfarlane et al., 1998; Christensen et al., 2000; Duraković et al., 2001; Nussinovitch et al., 2012); but not others (Zita et al., 2004). The conclusion drawn by Bogun et al. (1996) that CAD patients with high QT dispersion are at higher risk of VA was partly based on evaluation of AdQTd in the studied groups. In a comparable study, AdQTd was used by Ostovan et al. (2008) to evaluate the susceptibility of patients with acute myocardial infarction (AMI) to VA. Ostovan data suggested that AdQTd ≥ 45 ms on the second day following AMI is a good indicator of the likelihood to develop VA. In cases with chronic cardiac ischemia, QTdR seems to increase proportional to severity of coronary atherosclerosis in CAD patients (Yilmaz et al., 2006). This fact is supported by a recent study that confirmed the tendency of QTdR values to upsurge significantly from single vessel toward three vessels CAD (Çağlar et al., 2014). According to some reports, QTdR is superior to QTd and QTcd in assessing risk of ventricular fibrillation (Higham et al., 1995) and probably other types of VA (Cin et al., 1997) in CAD patients. A study designed to evaluate ventricular repolarization in CAD showed no difference in JTd when women without coronary artery stenoses were compared with one or two vessel CAD at rest (Zita et al., 2004). However, JTd > 33 ms at the peak of exercise achieved the best diagnostic value compared to JT and ST products. In another study, measurements of ventricular repolarization were assessed in 17 patients who died because of arrhythmia induced by CAD and 51 matched survivors (Zareba et al., 1994). Results of multivariate analyses strongly suggested prolonged JTd and JTcd as independent risk factors of arrhythmic cardiac death.

The comparable QT-derived values in CSX and CAD patients suggest comparable effects of these diseases on the ventricular recovery times (Malik and Batchvarov, 2000). Coronary microvascular dysfunction is common in CSX patients and may be part of a more generalized vascular disorder involving other organs in the body (Cannon, 1995; Masci et al., 2005). This hypothesis is augmented by abnormal levels in nitric oxide and endothelin-1 (Piatti et al., 2003) and higher prevalence of migraine (Nakamura et al., 2000) in CSX patients. Coronary macro- and micro-vascular dysfunction induces myocardial ischemia in CAD and CSX respectively, which in turn prolong ventricular recovery time (VRT). The disturbed VRT explains why most measurements of dispersions are comparably increased in CAD and CSX compared with normal reference values. Actually, all measurements of dispersions evaluated in the present study were higher in CSX compared to CAD patients; however, only JTd achieved statistical significance. This interesting finding should motivate researchers to investigate if CSX subjects are at higher risk to develop VA compared to CAD patients.

Limitations of this study include absence of a healthy control group. Precise exclusion of CAD and CSX in the control group may necessitate performance of coronary angiography and cardiac stress tests. Ethically, both procedures are difficult to perform for patients without complaints, especially elder individuals. Consequently, measurements of ventricular repolarization were interpreted by making a comparison with cutoff reference values. Noteworthy, values of various types of QT and JT dispersions showed wide overlap between healthy subjects and diseased patients (Davey et al., 1994; Shah et al., 1998; Duraković et al., 2001; Nussinovitch et al., 2012). The previously reported variations in the normal physiological range of different types of QT and JT dispersions are possibly due to influences of gender (Macfarlane et al., 1998), age (Macfarlane et al., 1998; Tran et al., 2001), and BMI (Mangoni et al., 2003) in these measurements. In the present study, the results were interpreted according to the AHA/ACCF/HRS recommendations for the standardization and interpretation of the electrocardiogram: part IV (Rautaharju et al., 2009) and other comparable reports (Macfarlane et al., 1998; Christensen et al., 2000; Duraković et al., 2001; Nussinovitch et al., 2012). Although adjustment for gender, age and BMI were also considered when comparing measurements of ventricular repolarization between CSX and CAD patients, the present study did not adjust for possible influences of medical therapy offered to patients and external atmospheric effects, which could also have effects on repolarization.

The present data clearly demonstrate comparable measures of ventricular repolarization in CAD and CSX patients. However, all QT-derived measurements of dispersion exceeded the upper limit of normal ranges in either group. Interestingly, both JTd and JTcd were significantly above reference values in CSX but not CAD patients. These findings suggest that the ventricular recovery time and consequently the risk of VA in CSX is comparable or even more than CAD. Further studies that also consider other electrophysiological parameters like duration of QRS and T waves, transmural repolarization gradients, ventricular late potential and follow-up for potential cardiac events are desirable to support the present findings.

Rautaharju, P. M., Surawicz, B., Gettes, L. S., Bailey, J. J., Childers, R., Deal, B. J., et al. (2009). AHA/ACCF/HRS recommendations for the standardization and interpretation of the electrocardiogram: part IV: the ST segment, T and U waves, and the QT interval: a scientific statement from the American Heart Association Electrocardiography and Arrhythmias Committee, Council on Clinical Cardiology; the American College of Cardiology Foundation; and the Heart Rhythm Society: endorsed by the International Society for Computerized Electrocardiology. Circulation 119, e241–e250. doi: 10.1161/CIRCULATIONAHA.108.191096

Copyright © 2016 Lutfi. This is an open-access article distributed under the terms of the Creative Commons Attribution License (CC BY). The use, distribution or reproduction in other forums is permitted, provided the original author(s) or licensor are credited and that the original publication in this journal is cited, in accordance with accepted academic practice. No use, distribution or reproduction is permitted which does not comply with these terms.