Commentary: Improvements in Cycling Time Trial Performance Are Not Sustained Following the Acute Provision of Challenging and Deceptive Feedback

We read with interest the recent study by Jones et al. (2016) who found performance gains elicited by deceptive feedback were not sustained in a subsequent ride-alone time trial (TT). Although they employed a design somewhat similar to a study from our laboratory (Shei et al., 2016), we feel the discrepancies between their findings and ours are the result of several methodological differences.

First, the final trial of our study followed a deceptive feedback trial, and it is possible the inclusion of an avatar on the computer screen contributed in part to the enhanced performance observed in this trial by an implicit competition effect. The presence of an avatar could be perceived as either competition or support (e.g., domestiques in mass-start cycling competitions or pacers in running races). To date, studies investigating the performance influence of a second athlete have been equivocal (Bath et al., 2012; Corbett et al., 2012). Presently, little is known regarding how cyclists perceive an avatar, warranting further investigation to advance our understanding of how competition is perceived. In our study the performance improvement (i.e., completion time) of 2.1% with- and following deceptive feedback was similar to the 1.7% improvement found by Stone et al. (2012) using deceptive feedback (individual responses given in Figure 1). Stone et al. (2012) also reported the presence of an accurate (no deception) avatar elicited only a 1.0% performance improvement, significantly (P < 0.05) less than the improvement observed with deceptive feedback. Hence, we propose the presence of an avatar alone is only partially responsible for the magnitude of the performance improvement observed in our study. 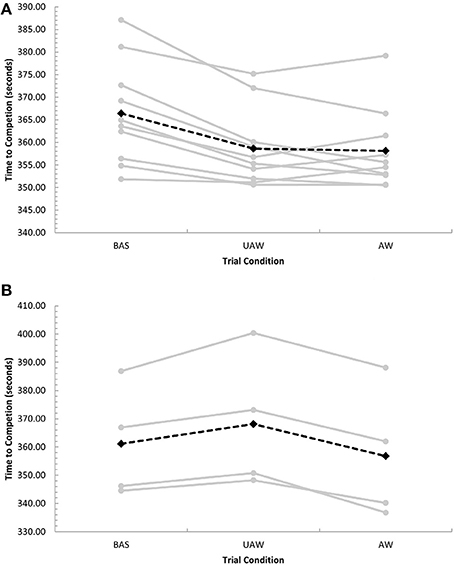 Finally, overall performance time or mean power output does not imply the use of identical pacing strategies across trials. Indeed, subjects can achieve identical mean power outputs despite purposefully different pacing strategies, which can impact fatigue development and performance (Atkinson and Brunskill, 2000). While Jones et al. (2016) did not observe differences in mean power output or performance time in the subsequent trial compared to baseline, their data appear to indicate an increased rate of the rise in power output during the last 4 km of the subsequent trial in both the deceived and accurate feedback groups (Figure 3, Jones et al., 2016) despite similar mean power outputs at 12 and 16 km. The participants may have been able to voluntarily increase their power output at some point over the last 4 km compared to their baseline trial, and analysis of the serial distribution of power output could clarify whether changes in pacing occurred between trials.

Changes in the serial distribution of power output could be due to the “end-spurt” phenomenon, an increase in power output and anaerobic energy contribution in the later stages of an event. The end-spurt has been found to occur reliably in the last 10% (or 400 m) of a 4 km time trial (Stone et al., 2011, 2012), and was observed in our study during all trials. In addition, end-spurts have been observed in TTs over 20 km and 30 mins (Thomas et al., 2012; Abbiss et al., 2016), so it is likely an end-spurt would occur during the last 10% (1600 m) of a 16.1 km time trial, although the onset and duration of an end-spurt likely differs based on distance, adopted pacing strategy, and other factors (Abbiss and Laursen, 2008). Importantly, even small increases in the end-spurt, can result in a meaningful increase in overall performance, despite not being reflected in mean power output over the last 4 km (Atkinson and Brunskill, 2000). We feel it remains plausible the “end-spurt” can be enhanced to a meaningful extent through an appropriate level of negative-deception feedback (via an ~2% change in mean power output in 4 km cycling TTs) by eliciting a greater contribution from previously inaccessible anaerobic energy reserves (Hettinga et al., 2006; Stone et al., 2011, 2012).

In summary, differentiating between the gain in performance from competition alone, and the additive gain from deception is important. Differences in cycling speed, pacing strategy, and time trial distance can each influence energy reserves, the magnitude of the “end-spurt,” and overall performance, ultimately determining an individual's response to deception. The variable of deception remains a useful tool in pacing research and it may ultimately become a viable training tool for improving cycling performance.

R-JS, EA, JR, KT, and TM all contributed substantially to the conception or design of the work, the drafting the work and revising it critically for important intellectual content, and the final approval of the version to be published. All authors agree to be accountable for all aspects of the work in ensuring that questions related to the accuracy or integrity of any part of the work are appropriately investigated and resolved.

We would like to acknowledge Dr. Hollie Jones and colleagues for their recent work which sparked this discussion, and for their ongoing contributions in pacing research.

Copyright © 2017 Shei, Adamic, Raglin, Thompson and Mickleborough. This is an open-access article distributed under the terms of the Creative Commons Attribution License (CC BY). The use, distribution or reproduction in other forums is permitted, provided the original author(s) or licensor are credited and that the original publication in this journal is cited, in accordance with accepted academic practice. No use, distribution or reproduction is permitted which does not comply with these terms.