Amelogenesis imperfecta is a group of rare inherited disorders that affect tooth enamel formation, quantitatively and/or qualitatively. The aim of this study was to identify the genetic etiologies of two families presenting with hypomaturation amelogenesis imperfecta. DNA was isolated from peripheral blood samples obtained from participating family members. Whole exome sequencing was performed using DNA samples from the two probands. Sequencing data was aligned to the NCBI human reference genome (NCBI build 37.2, hg19) and sequence variations were annotated with the dbSNP build 138. Mutations in MMP20 were identified in both probands. A homozygous missense mutation (c.678T>A; p.His226Gln) was identified in the consanguineous Family 1. Compound heterozygous MMP20 mutations (c.540T>A, p.Tyr180* and c.389C>T, p.Thr130Ile) were identified in the non-consanguineous Family 2. Affected persons in Family 1 showed hypomaturation AI with dark brown discoloration, which is similar to the clinical phenotype in a previous report with the same mutation. However, the dentition of the Family 2 proband exhibited slight yellowish discoloration with reduced transparency. Functional analysis showed that the p.Thr130Ile mutant protein had reduced activity of MMP20, while there was no functional MMP20 in the Family 1 proband. These results expand the mutational spectrum of the MMP20 and broaden our understanding of genotype-phenotype correlations in amelogenesis imperfecta.

Non-syndromic amelogenesis imperfecta (AI), hereditary enamel defects, can be divided into 3 major categories based on the quantity and quality of the enamel (Witkop, 1988). In hypoplastic AI, the enamel is thin with interdental spacing and the affected individuals are often sensitive to thermal changes and possess an increased tendency of anterior open bite (Ravassipour et al., 2005). In hypocalcification AI, the affected enamel is extremely soft with normal thickness prior to tooth eruption, which may be lost rapidly after eruption leaving the remaining enamel rough, discolored, and thin. Hypomaturation AI is caused by failures during the maturation stage of amelogenesis. The resulting phenotype is characteristically (dark) brown or yellowish discolored less mineralized enamel with normal thickness. But because the enamel is not matured well, prolonged attrition can result in excessive enamel wear facets or localized enamel fractures (Wright et al., 2011). However, definitive characterization of the phenotype may be challenging in some cases. Therefore, a broader classification scheme with two categories has been used: hypoplastic AI and hypomineralized AI. The hypomineralized AI includes hypocalcification AI and hypomaturation AI (Prasad et al., 2016).

Here we report the identification of MMP20 mutations in two Turkish families with hypomaturation AI by whole exome sequencing and the mutational effect on the protein secretion and proteolytic activity.

Identification and Enrollment of AI Families

Clinical and radiographic examinations of the probands and their available family members were performed, and blood samples were collected with the understanding and written consent of each participant according to the Declaration of Helsinki. Affected individuals were healthy, except hypomaturation enamel defects. The study protocol was independently reviewed and approved by the Institution Review Board at the Seoul National University Dental Hospital, the University of Istanbul and the University of Michigan.

Genomic DNA was isolated from peripheral whole blood. The purity and concentration of the DNA were quantified by spectrophotometry measurement and the OD260/OD280 ratio obtained. Whole-exome sequencing was performed with the DNA sample of the probands using Illumina HiSeq 2000 platform. The NimbleGen (Roche Diagnostics, Indianapolis, IL, USA) exome capture reagent was used for exome capturing.

The sequence variations in the MMP20 gene and segregation within each family was confirmed by Sanger sequencing with primers and conditions described previously (Kim et al., 2005). PCR amplifications were done with the HiPi DNA polymerase premix (Elpis Biotech, Daejeon, Korea), and DNA sequencing was performed at a DNA sequencing center (Macrogen, Seoul, Korea).

Cloning and Mutagenesis of the MMP20 cDNA

HEK293T cells were grown and maintained in DMEM supplemented with 10% FBS and antibiotics in a 5% CO2 atmosphere at 37°C. Cells at ~2 × 105 quantity were seeded in each well of the 6-well culture dish. Each plasmid construct at 2 ug quantity was transiently transfected into HEK293T cells with Genjet in vitro DNA transfection reagent (SigmaGen Laboratories, Ijamsville, MD, USA). The culture medium of each well was harvested after 30 h of incubation and concentrated using Amicon ultra-4 centrifugal filter units (Millipore, Bedford, MA, USA).

Four ml of conditioned medium from the culture was collected and concentrated to 50 ul. The concentrated media of 20 ul was mixed with 4 ul of 5x non-reducing buffer, then loaded onto the 11% SDS-polyacrylamide gel with β-casein (Sigma-Aldrich, St. Louis, MO, USA) as a substrate. The zymogram was developed, stained with Coomassie brilliant blue R-250 staining solution (Bio-rad, Hercules, CA, USA) for 20 min, and visualized after incubation in a destaining solution (10% MeOH, 10% acetic acid) for 3 h.

Concentrated media and cell lysates were run on the 11% SDS-polyacrylamide gel and subjected to Western blotting. Specifically, 50 ug cell lysate from each sample and 10 ul of concentrated media were used. After gel transfer to the PVDF membrane and blocking, MMP20 was detected by incubating the membrane with primary antibody overnight at 4°C and with secondary antibody for 2 h at room temperature. The primary antibodies used were a rabbit polyclonal anti-MMP20 antibody (ab39038, abcam plc., Cambridge, UK) and a mouse monoclonal anti-ACTB antibody (A2228, Sigma-Aldrich, St. Louis, MO, USA); both of which were diluted in 1:10,000.

The proband of Family 1 (IV:4) was an 11-year-old girl from a consanguineous marriage of first cousins (Figure 1A). Her prenatal and perinatal history was uneventful and her parents reported no other medical problem. Her teeth exhibited generalized brown discoloration with exogenous black pigmentation mainly on occlusal surface of the posterior teeth (Figures 1B–D). Maxillary left central incisor was lost due to trauma. The radiopacity of enamel did not contrast well with dentin in the panoramic radiograph, consistent with hypomineralization (Figure 1E). Her 24-year-old brother (IV:3) was also affected and almost all of his teeth have been reconstructed with full-coverage prosthodontics. His remaining natural teeth exhibited dark brown discoloration with exogenous pigmentation (Figure S1). 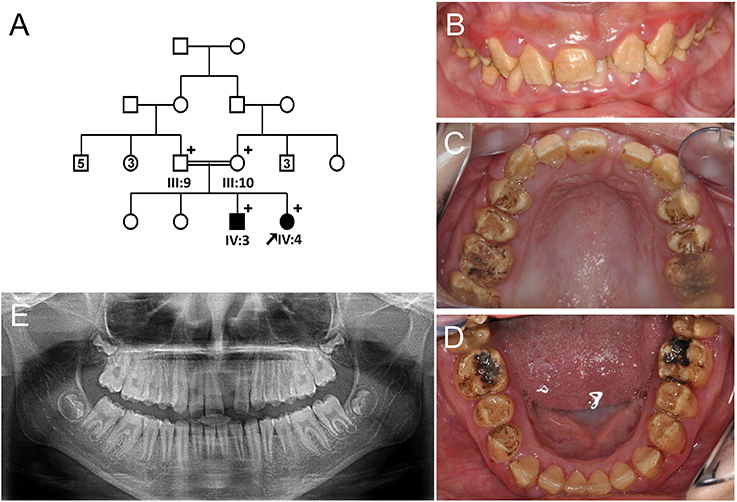 The proband of the family 2 (III:1) was a 10-year-old girl from a non-consanguineous family (Figure 2A). Her past medical history was unremarkable. Her anterior permanent teeth were not severely discolored, but slightly yellow and less transparent than normal teeth (Figures 2B,C). Her right second premolar was congenitally absent based on the panoramic radiograph (Figure 2D). 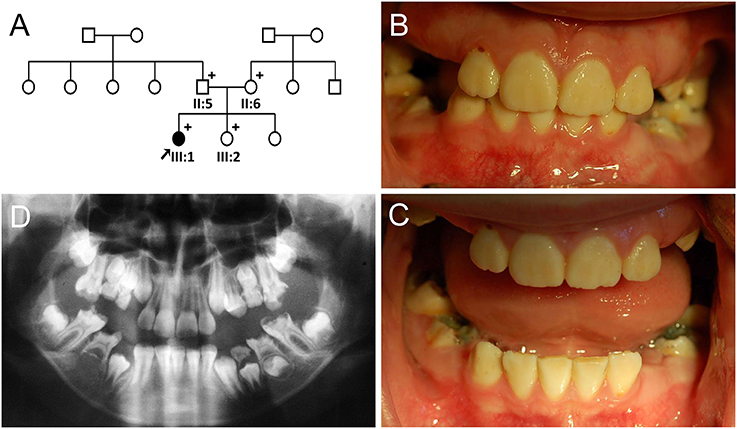 Sequencing reads were aligned to the UCSC human reference genome (hg19) with Burrow-Wheeler Aligner, and the sequence variations were annotated by referencing dbSNP build 138, which preceded variant calling with SAMtools and GATK (Table S1). Annotated variants were filtered with the criteria of minor allele frequency of 0.01.

Whole exome sequencing of the Family 2 proband revealed compound heterozygous MMP20 mutations (c.389C>T and c.540T>A). There was no other variation in the known AI-causing genes. A cytosine to thymine transition in exon 3 changed threonine to isoleucine at amino acid position 130 (p.Thr130Ile). This variation was listed in the Exome Aggregation Consortium (ExAC) database (rs61730849) with an allele frequency of 0.00165 (200/121176). But the frequency was relatively high (0.0294) in a certain subset of small population (ss86247256, AGI_ASP_population; Coriell Apparently Healthy Collection). In addition, it was previously reported as a disease-causing mutation (Gasse et al., 2013). The other variation, a transversion of thymine to adenine in exon 4, would introduce a premature stop codon (p.Tyr180*) and the mutant transcript would be degraded by the nonsense-mediated decay system. This variant was not listed in any database. 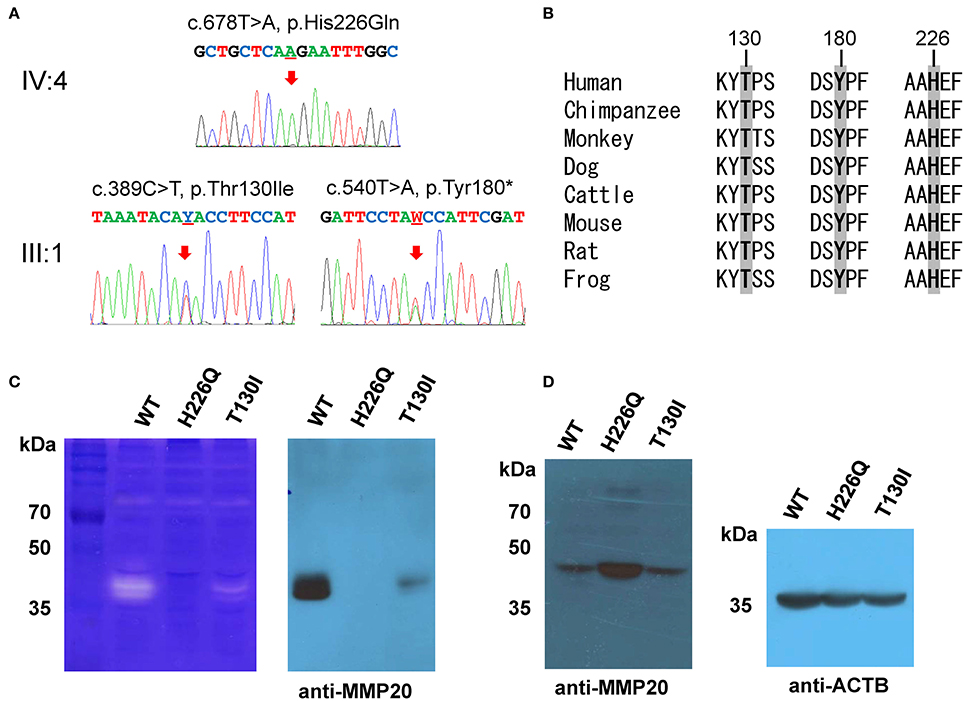 MMP20 is one of 23 human matrix metalloproteinases. It processes structural enamel matrix proteins into functional fragments in the secretory stage and facilitates the removal of those proteins during the maturation stage. MMP20 gene is located in a cluster with 7 other MMPs on chromosomal location 11q22.3. MMP20 encodes a 483-amino-acid protein, which has a signal peptide (Met1 to Ala22), a prodomain (Ala23 to Asn107), a catalytic domain (Tyr108 to Gly271), a linker (Pro272 to Leu295) and a hemopexin domain (Cys296 to Cys483) (Llano et al., 1997).

The homozygous missense mutation (c.678T>A, p.His226Gln) identified in Family 1 was previously reported (Ozdemir et al., 2005; Wright et al., 2011). His226 is one of the three histidine residues involved in the coordination of zinc ion at the active site (Llano et al., 1997). This study showed that the p.His226Gln mutant protein cannot be secreted into the developing extracellular matrix, probably due to a structural change in the core area of the protein.

The Family 2 proband had a paternal nonsense mutation (c.540T>A, p.Tyr180*) and a maternal missense mutation (c.389C>T, p.Thr130Ile) (Gasse et al., 2013). This novel nonsense mutation would introduce a premature stop codon in exon 4, so the mutant mRNA transcript would be degraded by the nonsense-mediated decay system. This study showed that the p.Thr130Ile mutant protein could be secreted into the developing enamel matrix and retained proteolytic function.

The functional analysis suggested that the Family 2 proband would have reduced MMP20 activity, while there's no functional MMP20 in the Family 1 proband. This reduced functional activity of MMP20 potentially explains the difference in clinical phenotype between the probands of these two families. Among nine mutations in MMP20 gene reported to date (Kim et al., 2005; Ozdemir et al., 2005; Papagerakis et al., 2008; Lee et al., 2010; Wright et al., 2011; Gasse et al., 2013; Wang et al., 2013; Seymen et al., 2015), mutations presumed to have retained functional activity would likely present less severe discoloration compared to nullifying mutations (Table 1). The degree of discoloration could be an indicator of the enamel porosity and reflects an altered level of maturation. Therefore, such clinical feature reflecting enamel quality should be considered by clinicians when devising a treatment plan for the patient.

As mutations of the MMP20 gene are characterized, their functional impact investigated, and clinical features of the affected individuals documented, it will enhance our ability to establish genotype and phenotype correlation and provide the needed evidence to improve clinical diagnosis and management of patients with AI.

This work was supported by grants from the National Research Foundation of Korea (NRF) grant funded by the Korea government (2014R1A2A1A11049931) and the National Institute for Dental and Craniofacial Research (DE015846).

The authors sincerely thank all the family members for their participation in this study.

The Supplementary Material for this article can be found online at: https://www.frontiersin.org/article/10.3389/fphys.2017.00229/full#supplementary-material

Copyright © 2017 Kim, Kang, Seymen, Koruyucu, Gencay, Shin, Hyun, Lee, Hu, Simmer and Kim. This is an open-access article distributed under the terms of the Creative Commons Attribution License (CC BY). The use, distribution or reproduction in other forums is permitted, provided the original author(s) or licensor are credited and that the original publication in this journal is cited, in accordance with accepted academic practice. No use, distribution or reproduction is permitted which does not comply with these terms.