The transient receptor potential vanilloid 1 (TRPV1) channel is highly expressed in a subset of sensory neurons in the dorsal root ganglia (DRG) and trigeminal ganglia of experimental animals, responsible for nociception. Many researches have revealed that some TRPV1-positive neurons co-express the transient receptor potential ankyrin 1 (TRPA1) channel whose activities are closely modulated by TRPV1 channel. However, it is less investigated whether the activities of TRPV1 channel are modulated by the presence of TRPA1 channel in primary sensory neurons. This study clarified the difference in electrophysiological responses induced by TRPV1 channel activation between TRPA1-positive and TRPA1-negative DRG. TRPV1 and TRPA1 channel activations were evoked by capsaicin (1 μM), a TRPV1 agonist, and allyl isothiocyanate (AITC; 500 μM), a TRPA1 agonist, respectively. Capsaicin perfusion for 15 s caused a large inward current without a desensitization phase at a membrane potential of −70 mV in AITC-insensitive DRG (current density; 29.6 ± 5.6 pA/pF, time constant of decay; 12.8 ± 1.8 s). The capsaicin-induced currents in AITC-sensitive DRG had a small current density (12.7 ± 2.9 pA/pF) with a large time constant of decay (24.3 ± 5.4 s). In calcium imaging with Fura-2, the peak response by capsaicin was small and duration reaching the peak response was long in AITC-sensitive neurons. These electrophysiological differences were completely eliminated by HC-030031, a TRPA1 antagonist, in an extracellular solution or 10 mM EGTA, a Ca2+ chelator, in an internal solution. Capsaicin perfusion for 120 s desensitized the inward currents after a transient peak. The decay during capsaicin perfusion was notably slow in AITC-sensitive DRG; ratio of capsaicin-induced current 60 s after the treatment per the peak current in AITC-sensitive neurons (78 ± 9%) was larger than that in AITC-insensitive neurons (48 ± 5%). The capsaicin-induced current in the desensitization phase was attenuated by HC-030031 in AITC-insensitive DRG. These results indicate that (1) TRPV1-mediated currents in TRPA1-positive neurons characterize small current densities with slow decay, which is caused by TRPA1 channel activities and intracellular Ca2+ mobilization and (2) desensitization of TRPV1-mediated current in TRPA1-positive neurons is apparently slow, due to appending TRPA1-mediated current.

Changes in intracellular calcium were measured with a fluorescent calcium indicator, as described previously (Masuoka et al., 2015, 2016). For microscopic fluorometric measurement, cultured DRG neuronal cells were washed twice with ACSF and incubated for 45 min in the CO2 incubator (37 ± 2°C) in a solution of 3 μM of Fura-2-acetoxymethyl ester (Fura-2 AM; Dojindo Laboratories, Kumamoto, Japan) and 0.005% Cremophor EL (Sigma). After incubation, cells were washed in ACSF for 30 min and culture dishes were placed on the stage of an inverted microscope (ECLIPSE TE 300, Nikon, Tokyo, Japan) equipped with a 20 × S-fluor objective. Fluorescence images were recorded and analyzed using a video image analysis system (ARGUS/HiSCA, Hamamatsu Photonics, Hamamatsu, Japan). Experimental agents were dissolved in ACSF and delivered by continuous perfusion in the recording chamber (2 mL/min) with a peristaltic pump. Capsaicin (1 mμM), AITC (500 μM) and KCl (50 mM) were respectively perfused for 15, 30, and 30 s in this order. Image pairs were captured at 5 s (beginning 5 min) or 10 s intervals. Fura-2 fluorescence was recorded at an emission wavelength of 510 nm by exciting Fura-2 at 340 and 380 nm. The 340–380 nm fluorescence ratio (F340/F380) was used as a parameter of intracellular calcium concentration.

Capsaicin and allyl isothiocyanate (AITC) were obtained from Sigma-Aldrich (St. Louis, MO, USA); 2-(1,3-dimethyl-2,6-dioxo-1,2,3,6-tetrahydro-7H-purin-7-yl)-N-(4-isopropylphenyl)acetamide (HC-030031) was obtained from Abcam (Cambridge, United Kingdom). The stock solution of capsaicin and AITC were dissolved in ethanol at the concentration of 10 mM and 2 M, respectively. HC-030031 was dissolved in DMSO at 100 mM. The stock solutions were diluted with ACSF just before the experiment. The working solutions were made not exceeding 0.03% ethanol, because 0.1–3% ethanol facilitates TRPV1 channels activity induced by capsaicin (Trevisani et al., 2002). 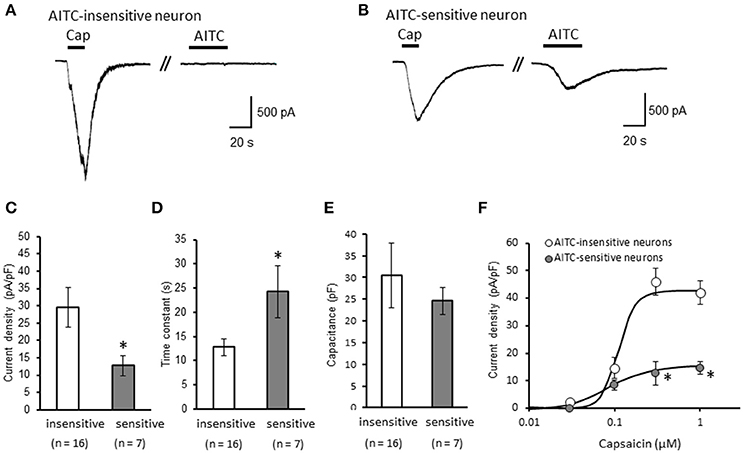 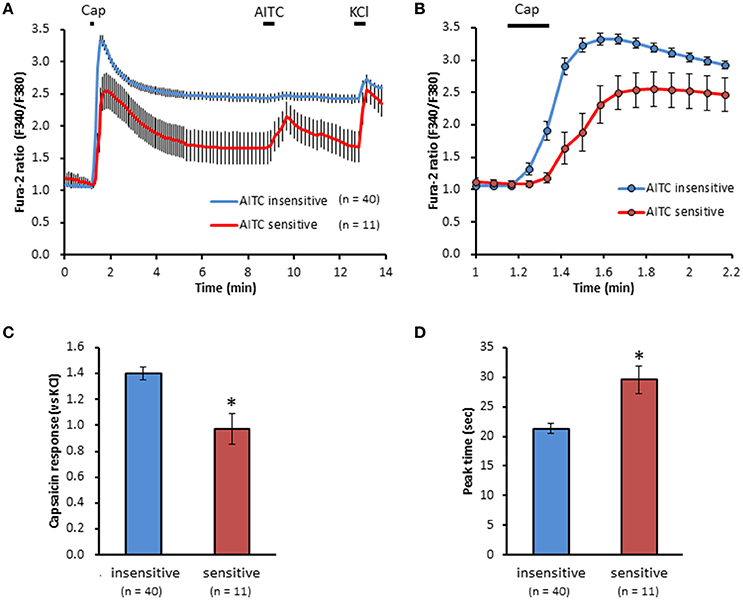 Figure 2. Differences in capsaicin-induced intracellular calcium elevation between AITC-insensitive and AITC-sensitive DRG neurons. (A) Time course of F340/F380 ratio before and after the perfusion of capsaicin (cap, 1 μM) AITC (500 μM) and KCl (50 mM) using Fura-2 AM dye. Horizontal bars represent periods of capsaicin, AITC and KCl perfusion. (B) Changes in F340/F380 ratio with a widespread expression of x axis between time 1 and 2.2 min of (A). The difference in peak response (C) and time reaching peak response (D) on capsaicin-induced elevation of intracellular calcium in DRG neurons. Data presented as mean ± SEM. *P < 0.05 against AITC-sensitive group. 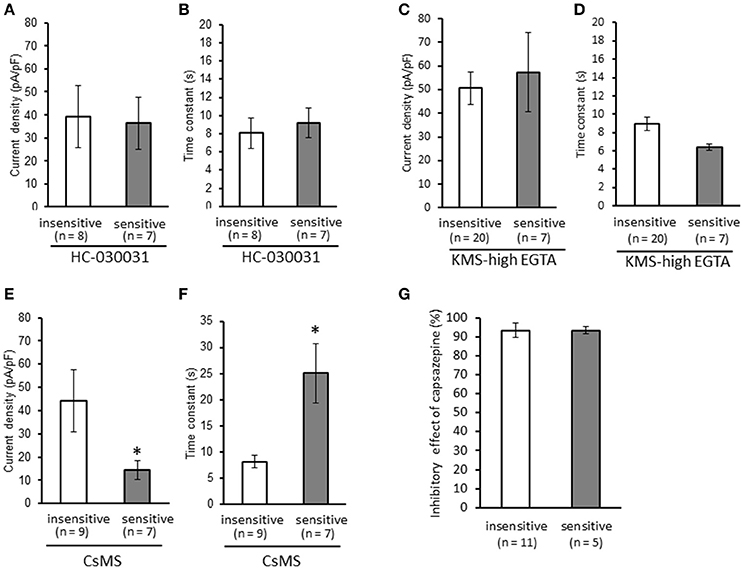 Figure 3. Contributions of TRPA1 channels, intracellular Ca2+ concentration, and potassium channels to the differences in kinetics of capsaicin-induced currents between AITC-insensitive and AITC-sensitive DRG neurons. Capsaicin-induced currents were recorded (A,B) in the presence of HC-030031 (5 μM, a TRPA1 antagonist), (C,D) with intracellular solutions containing a high EGTA concentration (10 mM, a Ca2+ chelator), and (E,F) with intracellular solutions containing cesium methanesulfonate (CsMS) instead of potassium methanesulfonate (KMS) to block potassium channels. The differences in the current density (A,C,E) and time constant of decay (B,D,F) are shown in each recording condition. (G) Effect of capsazepine on capsaicin-induced current in AITC-sensitive and AITC-insensitive neurons. Each column and vertical bar represent the mean ± SEM. *P < 0.05 by unpaired t-test.

Figure 4. The differences in desensitization of currents induced by persistent perfusion of capsaicin. (A) Representative traces of current response induced by 1 μM capsaicin (cap) perfusion for 120 s in AITC-insensitive (left) and AITC-sensitive (right) DRG neurons. (B) The difference in the decay of capsaicin-induced current 60 s after initiating the perfusion between AITC-insensitive DRG neurons (open column) and AITC-sensitive DRG neurons (gray column). Each column and vertical bar represent the mean ± SEM. *P < 0.05 by unpaired t-test.

TM designed and performed the research, analyzed the data, and wrote the paper. MK and YY performed research and analyzed data. JY, NI, IM, MN, and TI wrote and revised the paper.

The authors would like to thank Enago (www.enago.jp) for the English language review. We thank Ms. Yasuko Shinzawa for her secretarial assistance.

Copyright © 2017 Masuoka, Kudo, Yamashita, Yoshida, Imaizumi, Muramatsu, Nishio and Ishibashi. This is an open-access article distributed under the terms of the Creative Commons Attribution License (CC BY). The use, distribution or reproduction in other forums is permitted, provided the original author(s) or licensor are credited and that the original publication in this journal is cited, in accordance with accepted academic practice. No use, distribution or reproduction is permitted which does not comply with these terms.

Involvements of TRP Channels and Oxidative Stress in Pain