Ultrasound Imaging of Mouse Fetal Intracranial Hemorrhage Due to Ischemia/Reperfusion

Currently, the exact mechanisms by which intrapartum hypoxic-ischemic events lead to acute antenatal ischemic stroke have not been fully elucidated due to the need for time-dependent observation. In this study, we adapted our intrauterine growth restriction mouse model for exposure to ischemia/reperfusion injury to evaluate the presence and timing of fetal intracranial hemorrhage. The ischemia/reperfusion cycles were generated for a mouse fetus by occluding and opening the uterine and ovarian arteries in the mother. Before and during the treatments, time-lapse ultrasound imaging of the fetal brain was performed. In addition, hemorrhage in the fetal brain was determined by histological observation. Our results indicate that protein-restricted diet increases the risk of fetal intracranial hemorrhage caused by ischemia/reperfusion, due to a breakdown in cerebrovascular autoregulation, showing the hemorrhage likely occurs after the second ischemic period.

This study was carried out in accordance with the recommendations of Regulations for Animal Experiments and Related Activities at Tohoku University, Center for Laboratory Animal Research, Tohoku University. The protocol was approved by the Center for Laboratory Animal Research, Tohoku University. Virgin female C57BL/6N mice (CLEA Japan, Inc., Tokyo, Japan) about 5 weeks old were maintained under controlled lighting (12-h light cycle) and temperature (24°C). These were divided into two diet groups: Normal (N) and Low Protein (LP) by feeding them AIN-93G and modified AIN-93G (Oriental Yeast Co., Ltd., Tokyo, Japan), respectively. They were allowed free access to food and water ad libitum. The LP diet consisted of only 48% of the protein and 94% of the calorie contents of the N diet as suggested in previous studies (Reeves et al., 1993; Ito et al., 2011a,b). After a 2-week acclimatization period, the female mice were time mated and inspected for vaginal plugs the following morning. Plug-positive females were then transferred to single cages and fed ad libitum. Food consumption and body weight were recorded every day. There was a total of 25 pregnant mice per diet group.

Figure 1. Time-sequence of the experiment. Ischemia (I) and reperfusion (R) conditions were created by occluding (C) and opening (O) maternal uterine and ovarian arteries every 5 min. Each circle indicates a timing at which ultrasound B-mode imaging or 3D power Doppler imaging was performed.

Using a Vevo 2100 high-frequency, high-resolution ultrasound device equipped with a linear array transducer MS-550D (VisualSonics, Inc., Toronto, Canada), ultrasound B-mode imaging of a cross section of a fetus brain was performed before and all throughout ischemia/reperfusion intervals (Figure 1). The central frequency of the ultrasound was 40 MHz resulting in the axial resolution of about 40 μm. The field of view was 7 mm in width by 10 mm in depth, and three different focal depths, 4, 6, and 8 mm, were set, simultaneously. One hundred B-mode images were stored at 50 frame/s, wherein each captured cineloop duration was 2 s. Moreover, before and after the ischemia/reperfusion treatment, three-dimensional (3D) ultrasound power Doppler imaging was performed to visualize concomitant blood flow in the area. The scanning length for the 3D imaging was set as 4.98 mm at the interval of 0.102 mm.

Changes of blood flow in fetal brains were quantified based on image intensity of ultrasound B-mode images. First, in order to suppress noise in the B-mode images, 100 images obtained at each measurement time point (see Figure 1) were averaged, with adjusting for image shifting due to maternal breathing and heartbeat as well as fetal movement. A customized image analysis program calculated the cross-correlation function between the first image and each subsequent image in the measurement period. Each image was shifted so as to maximize the function, and the time-averaged B-mode image at each time point was then created by averaging image intensities at each pixel. Subsequently, the summation of image intensity, I, in a circular region of interest (ROI) with 15-pixel diameters of 0.35 mm was obtained with a separate image-processor (ImageJ, NIH, Bethesda, MD, USA). The ROIs were set at four different locations: cingulate cortex, area 2 (Cg2), basal forebrain (BF), and bilateral caudate putamen (Cpu). Finally, for each ROI, the summation of image intensities, I, was normalized with that before the treatment, I0, and the variation of the relative value of I/I0 was evaluated. A total of five N fetal brains without hemorrhage and five LP fetal brains with hemorrhage, all previously confirmed by above-mentioned histology, were analyzed.

The number of hemorrhage-positive fetuses on histology for each diet treatment group were counted, and the difference between the two groups were evaluated by Fisher's exact test. The differences in intensity of ultrasound B-mode images between the groups were analyzed using a t-test. Statistical significance for each analysis was set at p < 0.05. 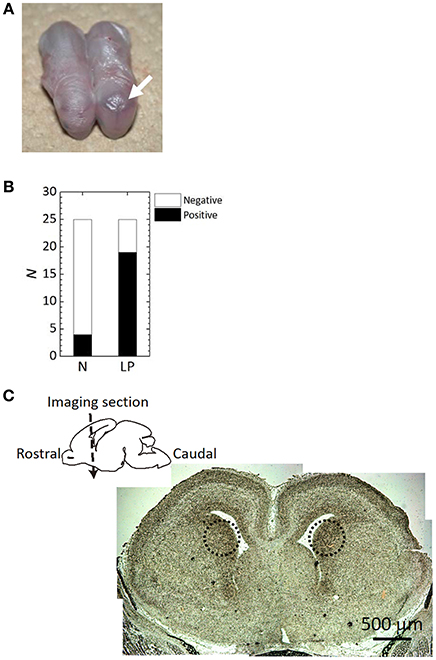 Figure 2. Histological analysis results after the ischemia/reperfusion treatments. (A) A snapshot of fetuses with or without intracranial hemorrhage (see an arrow) after the delivery. (B) The frequency of hemorrhage occurrence determined by craniotomy of the fetuses in Normal (N) and Low Protein (LP) diet groups. There was a significant difference between the groups (p < 0.05). (C) Microscopic imaging section of an LP fetal brain on a imaging section. Dotted circles in the microscope image indicate the hemorrhage sites.

Sequential ultrasound B-mode images of the same cross section in Figure 2C were successfully obtained during the ischemia/reperfusion treatments as shown in Figure 3A. This achievement enabled us to quantify changes in blood flow by intensity analysis of the sequential images described later with Figures 3B–D. At the Cpu beside the lateral ventricles where intracranial hemorrhage observed in the microscopic image, increases of the intensity were recognized in the sequential ultrasound B-mode image. 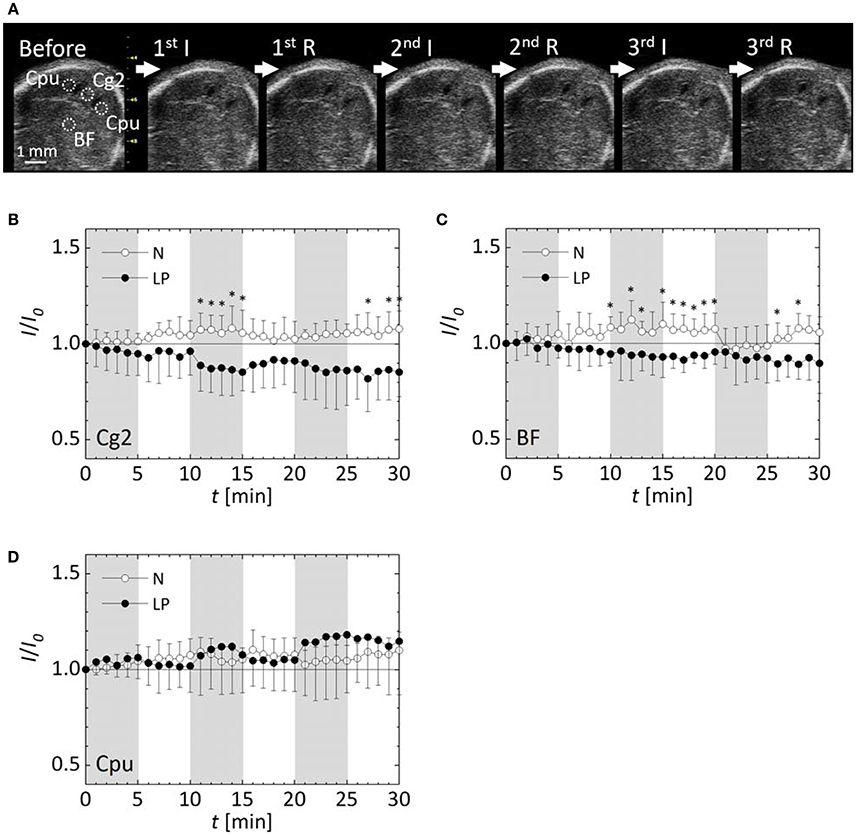 Figure 3. Observation results by ultrasound B-mode imaging. (A) A sequential ultrasound B-mode image of a cross section of an LP fetal brain at each phase of the ischemia (I) and reperfusion (R). Dotted circles represent ROIs for quantification of the image intensity. Variations of relative intensities in ROIs in normal (N) and low protein (LP) fetuses: (B) the cingulate cortex, area 2 (Cg2), (C) the basal forebrain (BF), and (D) the bilateral caudate putamen (Cpu). Five fetuses were analyzed for each case. Shaded time intervals are ischemic period, and the other ones are reperfusion period. Error-bars represent standard deviation. *p < 0.05. 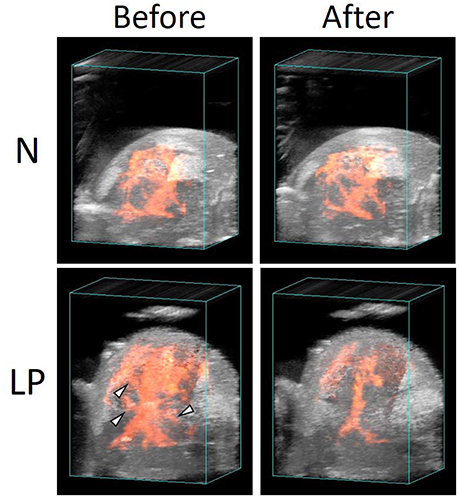 The present study provides further evidence that ischemia/reperfusion events lead to the evolution of antenatal stroke. Moreover, it supports the assertion that the frequency of fetal cerebral hemorrhage increases in conditions of maternal-fetal undernutrition. It is known that fetal undernutrition causes diseases or disorders after birth or in adulthood (Woodall et al., 1996). The maternal/fetal low-protein condition also contributes to fetal cerebral hemorrhage, showing that the frequency of fetal cerebral hemorrhage was statistically increased as shown in Figure 2B. Most bleeding-prone areas were the outer peripheral potion of the lateral ventricles of Cpu as displayed in Figure 2C. This tendency of fetal intracranial hemorrhage corresponds to the reference (Volpe, 2001), which reviewed an increased likelihood of periventricular leukomalacia in the presence of intraventricular hemorrhage.

Hypoxic condition was created by occluding the uterine and ovarian arteries and holding blood at the placenta. It is reported that brain cells can endure 15-min oxygen deficiency, and the present method of three times 5-min occlusion of the maternal arteries corresponds to the circumstance. Former studies utilized an animal model of rabbit for cerebral hemorrhage by repeatedly occluding and opening the carotid artery. In the animal model, blood supply to the brain was physically interrupted, and was impractical to apply to investigation of fetal intracranial hemorrhage. The present method enables us to noninvasively induce cerebral hemorrhage in a fetus through maternal arterial occlusion and directly observe the physiologic phenomenon of fetal brain sparing though real-time ultrasonography.

The variations of the relative intensity of ultrasound B-mode images represented different tendencies between the ROIs and nutrient conditions. In all ROIs, the blood flow in the N fetus retained or rather slightly increased during ischemia period. This implies that the N fetus has cerebrovascular autoregulation to maintain a constant blood supply to the fetal brain during the ischemia/reperfusion. In contrast, in both Cg2 and BF ROIs, cerebral blood flow in the LP fetuses decreased in the ischemia period and slightly returned in the following reperfusion period (Figures 3B,C). Whereas, the blood flow in Cpu of LP fetuses increased and became unstable with a relatively large deviation after the second ischemic period (Figure 3D). Interestingly, fluctuations of relative intensity in the Cpu ROI were opposite between N and LP fetuses. In 3D ultrasound power Doppler imaging of an LP fetal brain (Figure 4), decreased blood flow in a large tributary of the anterior cerebral artery was clearly recognized (Dorr et al., 2007). From all these observations, it may be concluded that the LP fetal brain fails to maintain blood flow during conditions of ischemia/reperfusion due to autoregulatory malfunction.

This study revealed “where” and “when” the intracranial hemorrhage occurs. However, “why” it occurs should be further investigated regarding mechanical weakness of a fetal intracranial vasculature and cell death. Decrease of blood flow in LP fetus observed in this study can be caused by lessened heart rate and decreased cardiac output. Further investigation would be performed by monitoring both maternal and fetal heart conditions with electrocardiography. Prevention method for fetal intracranial hemorrhage is also future work.

The presence and timing of fetal intracranial hemorrhage caused by ischemia/reperfusion injury were evaluated using an intrauterine growth restriction mouse model. Histological analysis and ultrasound imaging were performed on mouse fetuses undergoing ischemia/reperfusion cycles which were generated by occluding and opening the uterine and ovarian arteries in the mother. Protein-restricted diets increase the risk of fetal intracranial hemorrhage due to a breakdown in cerebrovascular autoregulation.

Part of the work was carried out under the Collaborative Research Project of the Institute of Fluid Science, Tohoku University. YK acknowledges funding from the Ministry of Education, Culture, Sports, Science and Technology (MEXT) Translational Research Network Program.

The authors are grateful to Prof. Toshiyuki Hayase at the Institute of Fluid Science, Tohoku University for providing us with the ultrasound imaging system for the present study.

Copyright © 2017 Funamoto, Ito, Funamoto, Velayo and Kimura. This is an open-access article distributed under the terms of the Creative Commons Attribution License (CC BY). The use, distribution or reproduction in other forums is permitted, provided the original author(s) or licensor are credited and that the original publication in this journal is cited, in accordance with accepted academic practice. No use, distribution or reproduction is permitted which does not comply with these terms.