Peak Velocity as an Alternative Method for Training Prescription in Mice

Fabiana A. Machado1 and

Purpose: To compare the efficiency of an aerobic physical training program prescribed according to either velocity associated with maximum oxygen uptake (vVO2max) or peak running speed obtained during an incremental treadmill test (Vpeak_K) in mice.

Methods: Twenty male Swiss mice, 60 days old, were randomly divided into two groups with 10 animals each: 1. group trained by vVO2max (GVO2), 2. group trained by Vpeak_K (GVP). After the adaptation training period, an incremental test was performed at the beginning of each week to adjust training load and to determine the amount of VO2 and VCO2 fluxes consumed, energy expenditure (EE) and run distance during the incremental test. Mice were submitted to 4 weeks of aerobic exercise training of moderate intensity (velocity referring to 70% of vVO2max and Vpeak_K) in a programmable treadmill. The sessions lasted from 30 to 40 min in the first week, to reach 60 min in the fourth week, in order to provide the mice with a moderate intensity exercise, totaling 20 training sessions.

Conclusions: Vpeak_K, as well as vVO2max, can be adopted as an alternative test to determine the performance and correct prescription of systemized aerobic protocol training to mice.

The most classical training prescription method for aerobic training in humans is based on tests using VO2max (ACSM, 2011), which represents the highest rate at which oxygen is extracted in the lungs, transported, and used by the body during maximal exercise (Bassett and Howley, 2000), however, it cannot considered the best predictor of performance (Noakes et al., 1990). In order to more accurately predict endurance performance, vVO2max has emerged and is defined as the minimum velocity at which VO2max is reached in an incremental exercise protocol (Daniels et al., 1984; Morgan et al., 1989; Billat et al., 1994, 1999; Buchheit et al., 2010; Rodrigues et al., 2017).

Although VO2max and vVO2max are consolidated variables to predict performance and to monitor and prescribe aerobic training, their determination requires the use of gas analyzers and a team of researchers familiarized with such instruments, periodic calibration, and high cost. This is true whether the tests are performed in humans or rodents (Fernando et al., 1993; Wisløff et al., 2001). Therefore, reliable and less costly alternatives have been tested and validated for training prescription, such as peak running speed (Vpeak), defined as the maximum velocity reached during an incremental test (Machado et al., 2013). This parameter is strongly correlated with endurance performance in human runners (di Prampero, 1986; Wisløff et al., 2001; Machado et al., 2007; Marcaletti et al., 2011) and presents a good correlation with VO2max.

Twenty Swiss male mice, 60 days old, acquired from the State University of Maringá (UEM), were maintained in individual polypropylene cages, lined with shavings and cleaned weekly, in an automated room for photoperiod control light-dark cycle 12/12-h at 20 ± 24°C. The mice were allowed to feed (Nuvilab Cr1®) and drink water ad libitum and food intake and body weight were measured weekly and at the end of the experiment. All procedures were previously approved by the Ethics Committee in Animal Research of the State University of Maringá (UEM) (Maringá, Paraná, Brazil) (protocol n° 033/2014).

The same incremental test was used for the determination of VO2max, vVO2max, and Vpeak_K, assessed on a motorized treadmill (Panlab®, Barcelona, Spain), adapted from the protocol proposed by Machado et al. (2013) in humans. The warm-up period lasted 5-min at 10 cm·s−1, with an initial velocity of 19 cm·s−1, followed by an increase of 9 cm·s−1, every 3 min until exhaustion, which was characterized by the animal incapacity to keep running in the final third of the streak for more than 10 s (Kregel et al., 2007), 0° slope. The speed unit used was cm·s−1 (Kurauti et al., 2016) and the training load was adjusted at the beginning of each training week and the group mean used to determine training intensity.

Determination of VO2max and VVO2max

Exercise intensity data and VO2max were recorded every second (METABOLISM software, Pan Lab/Harvard Instruments, Spain) and monitored by an external researcher who visually determined the highest VO2 reached during the test considered the VO2max (McLaughlin et al., 2010), measured at an average of 5-s intervals. Therefore, vVO2max was determined as the minimal velocity at which the highest VO2max occurred (Billat et al., 1994, 1999).

Vpeak was considered the peak running speed obtained during the incremental treadmill test (Machado et al., 2013); if the last stage during the test was not completed, the Vpeak_K was calculated on the part-time achieved using the equation proposed by Kuipers et al. (2003): Vpeak_K = (V + t/T x speed increase), where V is the corresponding velocity of the last completed stage (cm·s−1), t the time (s) of the uncompleted step and, T the completed step (180 s).

Mice were submitted to 4 weeks of aerobic exercise training in a programmable treadmill (Inbrasport, Porto Alegre, Brazil) adapted with a support to accommodate 10 mice simultaneously. The training intensity was established at 70% of the maximum speed reached during the incremental test for the determination of the variables, vVO2max and Vpeak_K, for the GVO2 and GVP groups, respectively. The 70% maximum speed of training correspond to a moderate exercise session since it presents a high correlation with VO2max. (Manoel et al., 2017). Training sessions began at 6 a.m. (lights on), consisting of 1 session per day, 5 times a week (Monday to Friday). The sessions lasted from 30 to 40 min in the first week, from 35 to 50 min in the second week, and 50 to 60 min in the third week, reaching 60 min in the fourth week, in order to submit mice to a moderate intensity exercise, totaling 20 training sessions; the weekly test was considered a training session.

The sample size was calculated using the G-power software (v.3.1.9.2) (Faul et al., 2007), which demonstrated the necessity of a sample of 11 mice per group for the main variable Vpeak_K; the average effect size was set at 0.25, P < 0.05 and 80% power for ANOVA analysis with effect and interaction. All statistical analyses were performed using the Statistica software (v.10, StatSoft Inc., Tulsa, OK, USA). Data are presented as mean ± standard deviation (SD). Shapiro-Wilk test was performed to verify data normality. Comparison of the pre-and post- training was made by mixed ANOVA for repeated measurements. To locate the differences, Tukey post-hoc was applied if significance was observed. The significance level was set at P < 0.05. The effect size was calculated using Cohen equation (d = M1 –M2/SD pooled) comparing post- vs. pre-training period of vVO2max and Vpeak_K. Values of 0.2, 0.5, and 0.8 indicated a small, medium and large average effect, respectively (Cohen, 1988).

In order to expand the data analysis beyond the descriptive statistic, we calculated the effect size comparing post- vs. pre-training period for vVO2max and Vpeak_K to assess the magnitude of findings; Figure 1 shows a large effect in both groups. 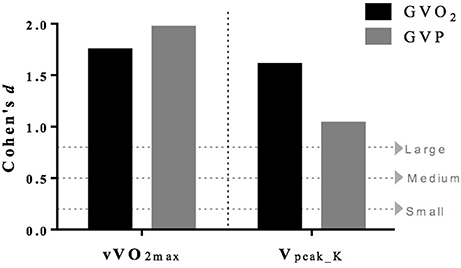 The aim of the present study was to compare the efficiency of an aerobic physical training program prescribed according to either vVO2max and Vpeak_K in mice. Our study demonstrates that both groups, GVO2 or GVP, improved VO2máx, vVO2max., and Vpeak_K after 4 weeks of aerobic training. In addition, Vpeak_K has been proved a reliable method to prescribe and monitor exercise training. Moreover, training improved performance in both groups and increased EE and the run distance. To our knowledge, this is the first study to address the importance of Vpeak_K in animal studies.

In the field of exercise physiology, there is great interest in determining the precise intensity of exercise as various research projects use animal models to study the effects of acute and chronic exercise. In this context, several methods to determine training load have been proposed (Kemi et al., 2002; Lerman et al., 2002; Ferreira et al., 2007).

Non-invasive tests report in the literature that use of VO2max as the variable to predict the performance of mice diverge from incremental tests and training protocols. In this sense, establishing a consensus about the results is not possible due to a wide range of reported values (47–94 ml·kg−1·min−1), according to the slope, magnitude of increase, volume, exhaustion criteria, lineages, age, physical condition, and sex of animals (Dohm et al., 1994; Scott and Houmard, 1994; Lightfoot et al., 2001; Wisløff et al., 2001; Kemi et al., 2002; Ayachi et al., 2016; Kurauti et al., 2016). A few studies have also focused on demonstrating that lineage and sex variations in mice may influence responses in aerobic power (Lightfoot et al., 2010; McLaughlin et al., 2010).

Considering that, it was conceivable that the use of Vpeak_K would help to minimize the observed differences in VO2max once the variable is more sensitive to changes in physical training in humans (Machado et al., 2013; Manoel et al., 2017). In our study, animals trained according to vVO2max or Vpeak_K had similar improvements in VO2max. and performance over time. In fact, GVO2 group presented a higher, although not significant, Vpeak_K. Despite the differences between the two prescription methods it is important to emphasize that the current study demonstrated that animals were able to improve aerobic capacity over time. From a metabolic point of view, other metabolic and structural adaptations may have occurred, hence allowing Vpeak_K-based protocol to be a trustworthy training model for rodents. Therefore, we hypothesize that Vpeak_K can also contribute to the prescription of exercise in different lineages, sex, and age groups of mice, since it has proved as a training-sensitive variable.

The determination of Vpeak_K, considering the equation proposed by Kuipers et al. (2003), allows evaluating aerobic power and monitoring the effects of training more reliable, as the equation takes into account the last stage completed added to the product of the rate of increase and the fraction of the incomplete last stage, abolishing the influence of subjective judgments or overestimations (Machado et al., 2013). Furthermore, Vpeak_K is a low-cost, practical, and reliable parameter, which makes it a fundamental tool for future research in the field of exercise physiology, especially considering the known difficulties of assessing VO2max in small rodents (Fernando et al., 1993; Scott and Houmard, 1994; Ayachi et al., 2016).

Although our research was carefully conducted, limitations and shortcomings are unavoidable. The content of muscle glycogen or correlation with blood levels of lactate were not verified during the training period. Also, the training was performed during the day (lights on), opposable to mice habits, which present a predominantly nocturnal behavior.

Vpeak_K has practical implications for researchers aiming to collect data concerning the effects of training due to its low cost, which is made possible by the fact that it does not require any expensive equipment (i.e., gas analyzer). In summary, Vpeak_K, as well as vVO2max, can be adopted as an alternative test to determine the performance and correct prescription of a systemized aerobic protocol training to mice.

The reviewer RRC and handling Editor declared their shared affiliation.

Copyright © 2018 Picoli, Romero, Gilio, Guariglia, Tófolo, de Moraes, Machado and Peres. This is an open-access article distributed under the terms of the Creative Commons Attribution License (CC BY). The use, distribution or reproduction in other forums is permitted, provided the original author(s) and the copyright owner are credited and that the original publication in this journal is cited, in accordance with accepted academic practice. No use, distribution or reproduction is permitted which does not comply with these terms.