To investigate the influence of short-term vigorous endurance training on aortic blood pressure (BP), pulse wave analysis was performed in 36 highly trained elite collegiate endurance runners before and after a 7-day intense training camp. Subjects participated three training sessions per day, which mainly consisted of long distance running and sprint training to reach the daily target distance of 26 km. After the camp, they were divided into two groups based on whether the target training was achieved. Aortic systolic BP, pulse pressure, and tension-time index (TTI, a surrogate index of the myocardial oxygen demand) were significantly elevated after the camp in the accomplished group but not in the unaccomplished group, whereas the brachial BP remained unchanged in both groups. The average daily training distance was significantly correlated with the changes in aortic systolic BP (r = 0.608, p = 0.0002), pulse pressure (r = 0.415, p = 0.016), and TTI (r = 0.438, p = 0.011). These results suggest that aortic BP is affected by a short-term vigorous training camp even in highly trained elite endurance athletes presumably due to a greater training volume compared to usual.

There is a widely held notion that the central arterial pressure waveform is synthesized by the overlapped reflection waves returning from the periphery (mainly lower body) on the incident wave in phase; therefore, there are disparities between aortic and peripheral BP waveforms (Nichols and McDonald, 2011). Importantly, aortic BP is more strongly related to concentric left ventricular geometry than brachial BP (Roman et al., 2007). Furthermore, systolic BP is strongly related to left ventricular hypertrophy, and pulse pressure is strongly related to vascular stiffening (Roman et al., 2007, 2010). Thus, assessment of aortic BP could be an indicator of cardiac and vascular condition.

We recruited the subjects from national ranked Ekiden relay race team in Japan. We studied a total of 36 well-trained male collegiate endurance runners. The average of their official best times for a 5,000-m race was 14′28″ ± 0′17″ (mean ± SD). All of the subjects were healthy, normotensive (<140/90 mmHg), non-obese (Body mass index, BMI <25 kg/m2), nonsmokers, who were free of medication as well as overt chronic heart and lung disease as assessed by their medical histories. None of the subjects were taking cardiovascular-acting medication. This study was reviewed and approved by the Institutional Review Board (Toyo University: 2012-R-04). Additionally, all procedures conformed to the ethical guidelines of the Helsinki Declaration. All subjects provided informed written consent prior to participation.

The 7-day camp was conducted in August (summer season). Although all subject engaged in regular long distance running, the target training distance during the 7-day camp was longer (26 km/day) than the weekly mandatory training distance. The target running distance the week before the camp was 13 km/day. To accomplish such a long distance, subjects participated in three practice sessions per day; 1st session (5:30–7:30), athletes mainly performed long distance running (group, individual, tempo running); 2nd session (8:30–12:30) consisted of jogging, basic core, and lower body strength training; 3rd session (14:00–18:30) consisted mainly of speed development training such as repetition of 400- and 1,000-m sprints. During the camp, all subjects were required to participate all practice sessions, and their schedules were strictly controlled, especially practice duration, meal times, and sleep.

To determine the effect of the intervention on the hemodynamic parameters, repeated measures analysis of variance was performed. In the case of a significant F-value, a post hoc test (the Bonferroni method) was performed to identify significant differences in the mean values of interest. For simple correlation analysis as well as to identify the effect of training distance on aortic and brachial BP, three subjects who did not engage any running practice during the camp were excluded due to lower leg injuries. These three subjects trained on the same schedule as others and performed stationary bike training instead of running. Data were reported as the mean ± SD. All comparisons were based on a 95% confidence limit with P < 0.05 considered statistically significant.

Table 1. Physical characteristics and hemodynamic variables in unaccomplished and accomplished training group before and after the camp. 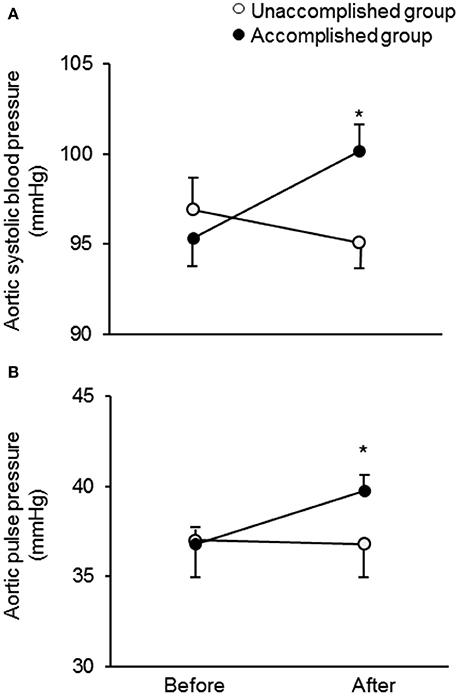 Figure 2. Change in aortic systolic blood pressure (A) and pulse pressure (B) in the unaccomplished and accomplished groups before and after the camp. *P < 0.05 vs. before the camp. 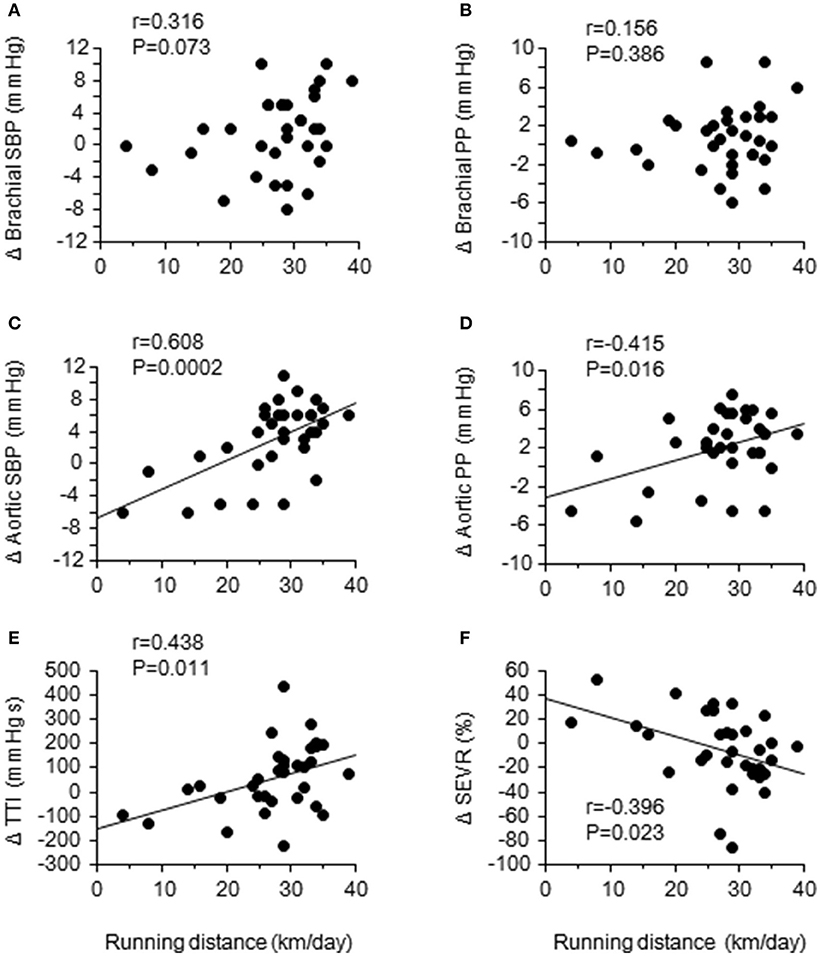 The primary findings from the present study are as flows. First, aortic systolic BP, pulse pressure, and tension-time index (TTI, a surrogate index of the myocardial oxygen demand) were significantly elevated after the camp in the accomplished group but not in the unaccomplished group, whereas the brachial BP remained unchanged in both groups. Secondly, the average daily training distance was significantly correlated with the changes in aortic systolic BP, pulse pressure, and TTI. These results suggest that aortic BP is affected by a short-term vigorous training camp even in highly trained elite endurance athletes partly due to a greater training volume compared to usual.

To the best of our knowledge, this is the first study demonstrating the acute elevation of aortic systolic BP and pulse pressure in elite endurance athletes after short-term endurance training camp characterized by a greater-than-normal training volume. Such changes were associated with a proximally greater than twice longer running distance compared with 1 week before the camp. In addition, individual changes in TTI, a surrogate index of oxygen demand, was positively correlated and SEVR, surrogate indices of myocardial oxygen consumption (Sarnoff et al., 1958) and sub-endocardial perfusion (Buckberg et al., 1972), was correlated negatively with the training distance during the camp. These results suggest that increased training volume with short-term may lead imbalance of myocardial oxygen demand and supply and cause of myocardial fatigue. Our findings could expand the evidence from the cross-sectional investigation that highly trained marathon runners have a higher aortic BP compared with age-matched recreationally active control subjects (Vlachopoulos et al., 2010). More importantly, the training camp did not significantly alter the peripheral BP, and individual changes in peripheral BP were not associated with the training distance during the camp. These results suggest that aortic hemodynamic measures are more sensitive than peripheral BP to acutely increased training volume. To confirm these findings, prospective data linking aortic BP response to chronic overtraining are needed.

The aortic pressure wave may be augmented by overlapping the early return and high amplitude of the reflected wave from the periphery (mainly from lower body) to the proximal aorta on the forward traveling wave generated by the LV ejection in-phase (Nichols and McDonald, 2011). In the present study, TR (a surrogate index of aortic pulse wave velocity) significantly correlated with other aortic hemodynamic measures such as aortic systolic BP and PP. Therefore, increases in aortic systolic BP and PP could not be explained by the early return of the reflected wave from peripheral to the heart. In this context, contrary to the traditional wave theory (Nichols and McDonald, 2011), recent studies suggest that the reflected wave component of arterial hemodynamics does not contribute to augmented central pressure (Schultz et al., 2015; van Mil et al., 2016). Furthermore, it has been also reported that the reflected wave might become diminished until in the proximal aorta, and it no longer possible to identify contributions to central pressure augmentation (Davies et al., 2012). Growing evidence suggests that major determinants of central BP waveform may be the incident waves arising from left ventricular ejection and proximal aortic compliance rather than the wave reflection (Sharman et al., 2009; Davies et al., 2010; Schultz et al., 2014).

The changes in central hemodynamic parameters in this study were potentially impacted by repeated mechanical stress from the heart, inflammatory state from muscle damage, and heart accumulation from prolonged exercise training during summer. First, repeated and particularly excessive stress imposed on the elastic elements of the aortic wall may be a cause of their mechanical fatigue which leads to elevating aortic BP (Nichols and McDonald, 2011). Secondary, aortic BP is affected by inflammatory state common observed in marathon runner after the race (Knez et al., 2006, 2007). It is plausible that the vigorous training-induced muscle damage and systemic inflammation may contribute to elevating aortic BP (Jee et al., 2013). In the present study, the participants of the camp practiced not only on flat track conditions but also on up-and downhill courses; thus, a large amount of exercise stress—especially eccentric contractions during downhill running—was given to the muscle. Furthermore, the 7-day training camp was conducted on summer, thus, the prolonged exercise in the heat causes greater hyperthermia that may yield heat acclimation. Further investigation to clarify the underlying mechanisms for sustained aortic arterial pressure elevation following vigorous intensity exercise training, especially during heat stress, is needed.

Several experimental considerations should be noted. The primary issue is the lack of recorded training intensity, such as heart rate during exercise. For example, by multiplying the duration of a training session by the average heart rate achieved during a session (i.e., training impulse; Macdougall et al., 1982), the training stimulus could be quantified in detail. In addition, we did not evaluate the concomitant changes in biochemical parameters (i.e., inflammation biomarker) and autonomic nervous activity. Measuring these parameters may yield insight on the mechanism of the increased aortic systolic BP after the training camp.

Training programs for highly trained athletes are planned with the repetition in the training cycle composed of intense training periods followed by shorter recovery periods, such as the repetition of over-reaching and super-compensation. The imbalance between training volume/intensity and recovery can lead to an advanced fatigue state (i.e., overtraining syndrome). Therefore, useful (e.g., sensitive) markers to detect fatigue are needed to prevent and manage overtraining for not only athletes but also coaches. Since the strength of this study was a field study with measured hemodynamics parameters in controlled condition among well-trained endurance athletes before and after the camp, the results of this study may provide the consideration of planning short-term summer training camps.

This study was funded by a Grant-in-Aid for Scientific Research from the Japanese Ministry of Education, Science, and Culture (Grant Numbers JP25702045 and JP26670116).

The reviewer NF declared a shared affiliation, with no collaboration, with one of the authors, SM, to the handling Editor.

We thank all subjects of this study and their team staffs.

Copyright © 2018 Tomoto, Sugawara, Hirasawa, Imai, Maeda and Ogoh. This is an open-access article distributed under the terms of the Creative Commons Attribution License (CC BY). The use, distribution or reproduction in other forums is permitted, provided the original author(s) and the copyright owner are credited and that the original publication in this journal is cited, in accordance with accepted academic practice. No use, distribution or reproduction is permitted which does not comply with these terms.