Background: Hypertension is characterized by sympathetic overactivity, which is associated with an enhancement in angiotensin receptor type I (AT1R) in the rostral ventrolateral medulla (RVLM). β-arrestin1, a canonical scaffold protein, has been suggested to show a negative effect on G protein-coupled receptors via its internalization and desensitization and/or the biased signaling pathway. The major objectives of the present study were to observe the effect of β-arrestin1 overexpression in the RVLM on cardiovascular regulation in spontaneously hypertensive rats (SHR), and further determine the effect of β-arrestin1 on AT1R expression in the RVLM.

Methods: The animal model of β-arrestin1 overexpression was induced by bilateral injection of adeno-associated virus containing Arrb1 gene (AAV-Arrb1) into the RVLM of WKY and SHR.

Conclusion: Overexpression of β-arrestin1 in the RVLM reduces BP and sympathetic outflow in hypertension, which may be associated with NFκB-mediated AT1R downregulation.

Accumulating evidences have demonstrated that excessive sympathetic outflow is an important contributor to essential hypertension (Schlaich et al., 2004; Hering et al., 2014). The rostral ventrolateral medulla (RVLM) contains pre-sympathetic neurons whose activity is critical for the generation of vasomotor sympathetic tone. The basal activity of pre-sympathetic neurons in the RVLM is a major mechanism responsible for the generation of resting blood pressure (BP) and sympathetic outflow (Zhang et al., 2008; Kumagai et al., 2012). It has been demonstrated that increased angiotensin II (Ang II) mainly acting on angiotensin receptor 1 (AT1R) in the RVLM contributes to high levels of BP and sympathetic outflow (Dampney et al., 2002). It is reported that Ang II signaling in the RVLM is upregulated under hypertensive condition, and blockade of central AT1R is beneficial to cardiovascular dysfunction in hypertension (Muratani et al., 1993; Ito et al., 2003; Dupont and Brouwers, 2010). Accordingly, AT1R has been regarded as an effective therapeutic target for hypertension.

β-arrestin, the one of visual arrestins (β-arrestin1 and β-arrestin2), has been identified as a scaffold protein that mediates G protein-coupled receptors (GPCRs) desensitization and internalization (Oakley et al., 2000; Satoh and Ready, 2005; Zhang et al., 2005). In additional, β-arrestin also triggers G protein-independent signaling pathway (biased pathway) (Lohse and Hoffmann, 2014), usually provoking totally distinct cellular responses (Jean-Charles et al., 2017). It has been reported that β-arrestin mediated AT1R desensitization and its biased signaling pathway may develop beneficial effects for treatment of heart failure and post-myocardial infarction (Lymperopoulos and Bathgate, 2013). For example, mechanical stretch of AT1R in murine heart leads to β-arrestin2-mediated signaling activation, which increases cardiomyocyte survival (Tang et al., 2014). However, little is known the effect of β-arrestin1 and it biased signaling on AT1R. In central nervous system (CNS), β-arrestin2 has been recently proved suppressor effect for hypertension in the RVLM (Wang et al., 2017). Although β-arrestin1 has been demonstrated to cell-autonomously regulate the morphology of microglia and maintain homeostasis of hippocampal neurogenesis (Tao et al., 2015; Li et al., 2016), the role of β-arrestin1 in the central regulation of cardiovascular activity in physiological or pathophysiological conditions still remains unknown. Hereby, the present study is designed to determine the effects of β-arrestin1 in the RVLM on cardiovascular regulation and AT1R expression in hypertension.

Sixteen-week-old male WKY rats and SHR were purchased from Sino-British SIPPR/BK Laboratory Animal Ltd., (Shanghai China) in these procedures. All experiments were approved by the Animal Care and Use Committee of Second Military Medical University, and were conducted to the principles of the Institutional Animal Care.

Construction and Production of Vector-Arrb1

The virus packaging was supported by Obio Technology company (Shanghai). The serotype 9 adeno associated virus (AAV9) was used as the vector to carry the rat Arrb1 cDNA (Accession No. NM_012910). The control vector (AAV-GFP) contained all sequence elements except the target gene (Arrb1). The final infectious titer was 3.7 × 1012 vector genomes/ml.

Retrograde Labeling of Spinally Projecting Neurons in the RVLM

The rats were anesthetized with chloral hydrate (1.65 ml/kg, ip) and fixed in the stereotaxic instrument. After the dorsal laminectomy, the Fluorogold (FG, 4% in saline, Fluorochrome, LCC, USA) was injected into intermediolateral cell column (IML), as previously described (Stornetta et al., 2001). As previously depicted (Jeske and McKenna, 1992), we chose T2 segment as the optimal locus where FG was injected (50 μm lateral to midline) into IML with 3 sites (800, 900, and 1,000 μm depth to spinal surface) (50 nl/site). After surgery, the rats were treated with lysed penicillin (3,000 units/kg, i.m.) and housed in pathogen-free environment. Three days later, the rats were euthanized and brain stem was harvested for immunofluorescence analysis.

Injection of AAV Into the RVLM

As previously described (Wang Y. K. et al., 2016), rats were anesthetized with continual inhaled isofluorane (3%) and placed in a stereotaxic frame (Shanghai Alcott Biotech). The skull was well exposed and two symmetrical holes (3.0 mm posterior to the lamda point and 2.0 mm lateral to the midline) were drilled upon the dorsal surface of the occipital. AAV particles containing GFP or Arrb1 gene fragment were bilaterally injected (9.5 mm down to the skull surface) into the RVLM by a 32-gauge Hamilton syringe (5 μl). Finally, rats were administrated with lysed penicillin (1,000 units/kg, i.m.) and housed in aseptic conditions. Rats of the experiments were assigned into four groups (WKY+AAV-GFP, WKY+AAV-Arrb1, SHR+AAV-GFP, SHR+AAV-Arrb1).

BP and HR (heart rate) in conscious rats were measured by noninvasive tail-cuff system every 4 days after treatments (ALC-NIBP, Shanghai Alcott Biotech) according to our previous study (Zha et al., 2013). Two weeks after overexpression of β-arrestin1, levels of BP, HR, and RSNA were further detected in anesthetized state. In anesthetized rats (urethane 800 mg/kg and α-chloralose 40 mg/kg ip), the right formal artery was catheterized and left renal sympathetic nerve was isolated for recording of BP, HR, and RSNA using a Powerlab system (AD Instruments). The maximum value of RSNA was calculated after rat was euthanized with an overdose of pentobarbital sodium (200 mg/kg), while the baseline RSNA was expressed as a percentage of maximal RNSA after the background noise was subtracted as previously described (Wang et al., 2007, 2014; Peng et al., 2009).

Acute Microinjection of Ang II Into the RVLM

As depicted previously (Gao et al., 2008b; Wang et al., 2009, 2014), the anesthetized rats were placed in the stereotaxic instrument, and the dorsal surface of the medulla was exposed. Microinjections into the RVLM (2.0–2.5 mm rostral and 2.0–2.2 mm lateral to calamus scriptorius, 3.0–3.2 mm deep to dorsal surface of medulla) were performed by a multiple-barrel micropipette. A pressor response to L-glutamate (2 nmol) injection was employed to chemically identify the RVLM before the administration of Ang II [100 pmol/100 nl in artificial cerebral spinal fluid (aCSF), Sigma-Aldrich] injection. Changes in BP, HR, and RSNA were continuously recorded by Powerlab system.

Based on our previous description (Gao et al., 2008b; Peng et al., 2009; Wang Y. K. et al., 2016), Western Blot analysis and PCR were performed for detecting the protein levels of β-arrestin1, AT1R, p-IκBα/ IκBα, and p-p65/p65 expression. After the rats were killed by an overdose of pentobarbital sodium (200 mg/kg, ip), the brain was removed and RVLM tissue was punched on a freezing microtome (−20°C) in reference to rat atlas. The tissue was lysed in cell lysate for resting for 30 min. After centrifugation of the samples, supernatant was left to measure the protein concentration. Since denatured in 100°C water bath, the protein (35 μg) was run on a 10% SDS-PAGE gel and transferred to PVDF membrane (Milipore). Two lanes on both the left and right containing a molecular weight marker, which provides a visual maker of transfer efficiency and marks band position for target protein. The blocked (5% milk in Tris-buffered saline-Tween) membranes were treated with anti-β-arrestin1 (no.32099, abcam), anti-AT1R (no.1173, Santa Cruz), anti-α-tubulin (no.T6074, Sigma-Aldrich), anti-p-IκBα (no.2859, Cell Signaling), anti-IκBα (no.4812, Cell Signaling), anti- p-p65 (no.3033, Cell Signaling), anti-p65 (no.32536, abcam) antibodies overnight at 4°C. After combination with species-specific secondary antibodies containing Strep-Tactin conjugated to horseradish peroxidase (IBA GmbH), the membranes were stained by chemiluminescent agent (Milipore), at last detecting the binds of protein by Syngene Bio Imaging system (Gene Company). The levels of target proteins were normalized to GAPDH or α-tubulin, which served as a loading control.

As depicted in our previous studies (Wang et al., 2014; Wu et al., 2016), after a lethal administration of overdose of pentobarbital sodium (200 mg/kg, ip), the rats were perfused through the aorta with 0.9% saline and 4% paraformaldehyde. Then the brain was removed and fixed in 4% paraformaldehyde (constituted in PBS) for 24 h at 4°C. Thereafter, 4% paraformaldehyde was replaced by 20% sucrose (constituted in PBS) to dehydrate the brain until it sank to the bottom. After swift frozen, the brain was dissected into sections of 20 μm and floated in PBS. The sections were blocked (10% BSA in PBS) for 2 h before incubated with anti-β-arrestin1 antibody (no:32099, abcam) overnight at 4°C. Then Fluorescein Affinipure goat anti-rabbit IgG (H+L) (no.111095, Jackson) was performed as second antibody to mark the sections with red fluorescence. At last, the sections were mounted on slides detected by a laser confocal microscopy (Leica, TCS-SP5).

Co-immunoprecipitation was performed as previously described (Qin et al., 2014). Protein A/G plus agarose beads (Santa Cruz) first pre-cleared with whole cell lysates, which were then incubated with anti-β-arrestin1 (no: 32097, abcam) under gender agitation overnight at 4°C. Next day the Protein A/G plus was mixed with the lysates and the mixture was incubated for 3 h at 4°C rotating. Following special centrifugation, the precipitation was washed three times with whole cell lysates and boiled in 1x SDS-loading buffer. Finally, the samples were subjected to normal Western Blot procedures. 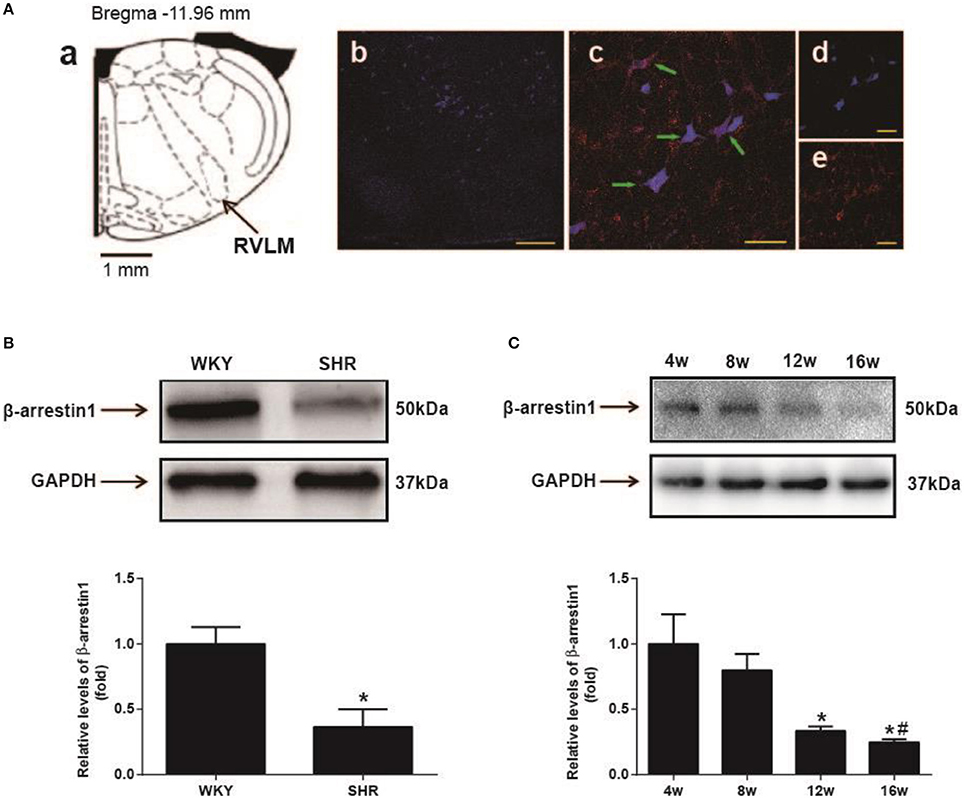 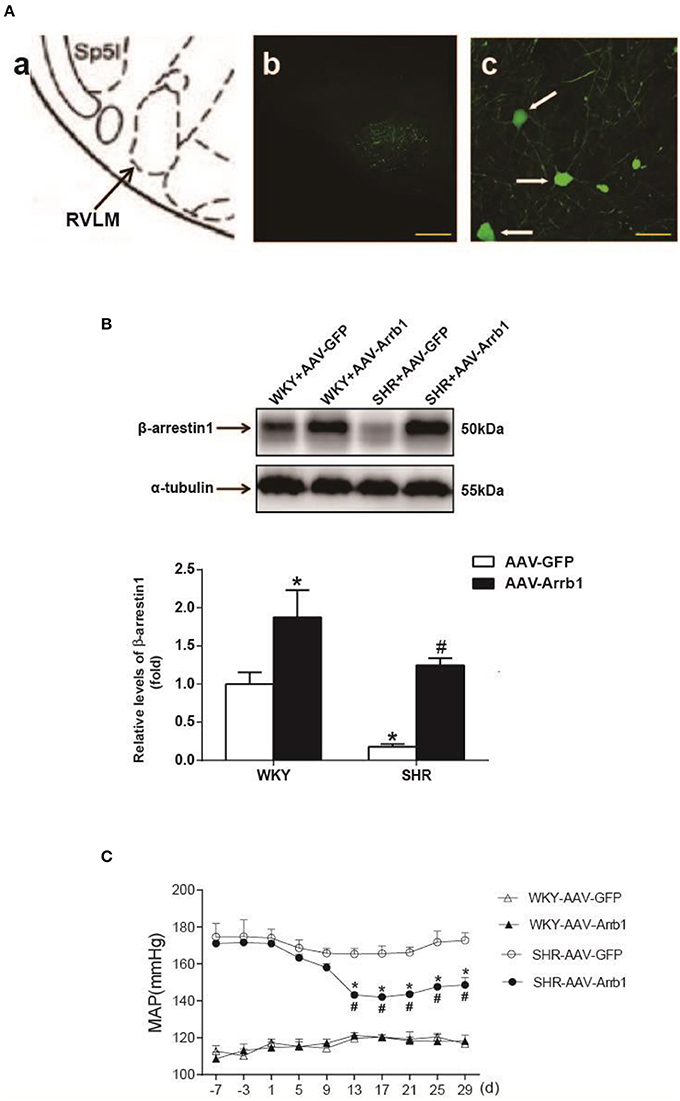 Figure 3. Effects of overexpressed β-arrestin1 on AT1R expression. Relative changes in AT1a/b mRNA (A) and protein level [B, representative gel bands (top) and quantification results (bottom)] in the RVLM in response to administration of AAV-Arrb1 in SHR vs. AAV-GFP group. No difference was detected in AT1b mRNA expression. n = 5 per group. *P < 0.05 vs. WKY-AAV-GFP group; #P < 0.05 vs. SHR-AAV-GFP group. 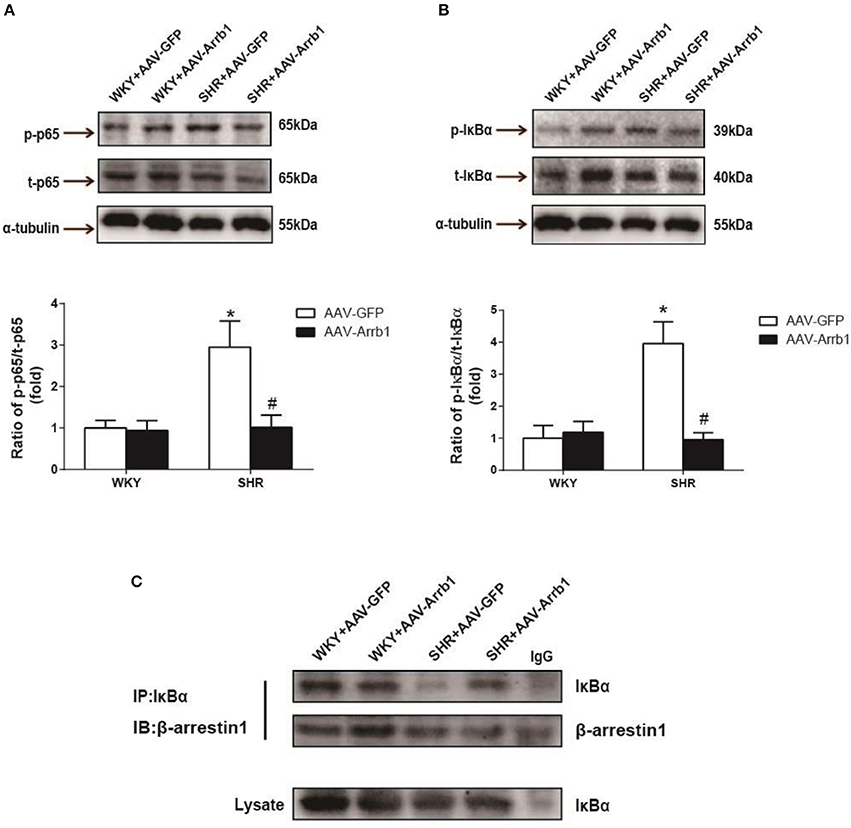 Figure 4. Effects of overexpression of β-arrestin1 on IκBα and NF-κB p65 phosphorylation. Representative gel bands (top) and quantification data (bottom) of phosphorylated NF-κB p65 (A) and IκBα (B) in response to transfection of AAV-Arrb1 or AAV-GFP in the RVLM. n = 5 per group. *P < 0.05 vs. WKY-AAV-GFP group; #P < 0.05 vs. SHR-AAV-GFP group. (C) Tissues in the RVLM of the four groups were lysed and immuneprecipitated (IP) by anti-IκBα antibody. Western Blot analysis was performed by anti-β-arrestin1 antibody. 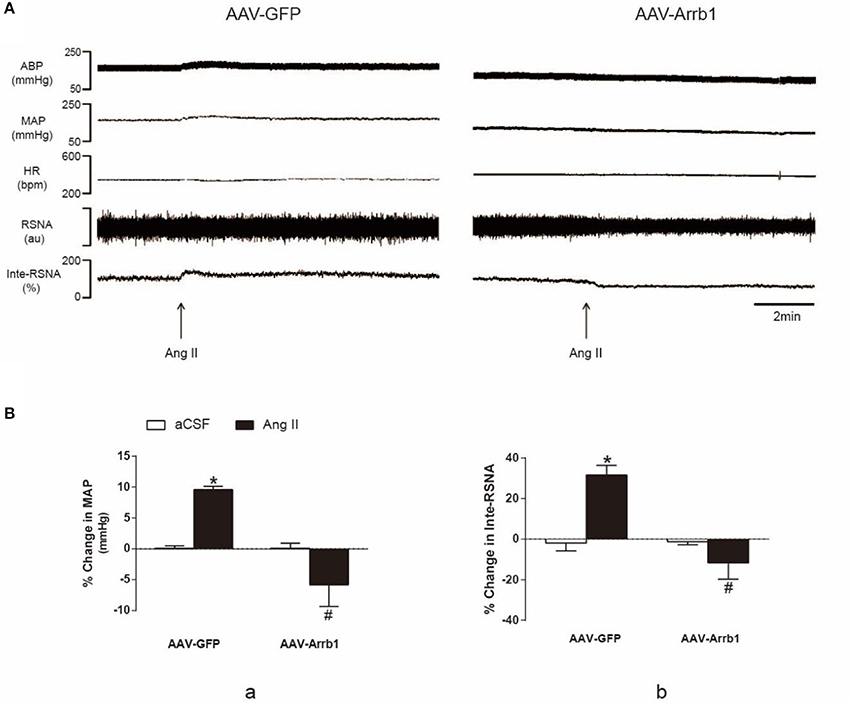 Copyright © 2018 Sun, Liu, Zhang, Jiao, Tan, Wang and Wang. This is an open-access article distributed under the terms of the Creative Commons Attribution License (CC BY). The use, distribution or reproduction in other forums is permitted, provided the original author(s) and the copyright owner are credited and that the original publication in this journal is cited, in accordance with accepted academic practice. No use, distribution or reproduction is permitted which does not comply with these terms.