The purpose of this study was to investigate the effects of β-alanine supplementation on a 10 km running time trial and lactate concentration in physically active adults. Sixteen healthy subjects were divided randomly into two groups: β-alanine (n = 8) and placebo group (n = 8). The experimental group ingested 5 g/day of β-alanine plus 1 g of resistant starch, and control group ingested 6 g of resistant starch, both for 23 days. Time to complete a 10-km running time trial and lactate concentration following the test were assessed at baseline and post 23 days. The running training program was performed three times per week on non-consecutive days (day 1: running 7 km; day 2: six sprints of 500 m at maximum speed with 2 min of recovery; day 3: running 12 km). The time to complete a 10-km running time trial decreased significantly only for the β-alanine group (Pre = 3441 ± 326.7, Post = 3209 ± 270.5 s, p < 0.05). When analyzing the delta (Time post minus Time at baseline value) there was a statistically significant difference between the β-alanine vs placebo group (-168.8 ± 156.6 vs. -53.60 ± 78.81 s, p = 0.007), respectively. In addition, the β-alanine group presented lower blood lactate concentration after the 10-km test (β-alanine: Pre = 8.45 ± 1.94 vs. Post = 6.95 ± 2.44 mmol/L; Placebo: Pre = 8.7 ± 3.0 vs. Post = 10.8 ± 2.5 mmol/L, p = 0.03). In conclusion, β-alanine supplementation improved the 10-km running time trial and reduced lactate concentration in physically active adults.

Beta-alanine (β-alanine) is a non-proteinogenic amino acid that combined with histidine can result in a dipeptide called carnosine, formed through an ATP-dependent reaction inside skeletal muscle mass (Tiedje et al., 2010). Daily doses of 4.8–6.4 g of β-alanine over 23 or 28 days can elevate human muscle carnosine content after supplementation (Harris et al., 2006; Bex et al., 2014). However, equimolar carnosine intake does not elevate muscle carnosine more than β-alanine alone (Derave et al., 2007) and the physiological roles of intramuscular carnosine during exercise suggest β-alanine supplementation as a great tool to enhance exercise performance.

Previous studies have shown that β-alanine increased the intramuscular buffering of hydrogen ions (H+), delaying the acidosis induced during high-intensity exercise (Saunders et al., 2017). Another physiological role of carnosine that may explain these ergogenic effects is to increase calcium sensitivity in muscle fibers and the amount of work performed (Dutka and Lamb, 2004; Dutka et al., 2012). Therefore, the increase in carnosine content could attenuate fatigue not only through its buffering capacities, but also its ability to improve myofibrillar Ca2+ sensitivity (Sale et al., 2010).

Some investigations analyzed the effects of β-alanine supplementation on performance in different exercise types and program structures. Meta analyses studies have demonstrated that the effects of β-alanine supplementation on performance are dependent on exercise duration and intensity. Saunders et al. (2017) observed that exercise lasting from 0.5 to 10 min shows the best results, while brief exercise (<0.5 min) does not present any improvement in performance. Hobson et al. (2012) also demonstrated that β-alanine is most effective during exercise of 60–240 s in duration, suggesting that this is due to the fact that maximum H+ accumulation occurs after approximately 4 min of high-intensity exercise (Osnes and Hermansen, 1972). However, the authors related that few studies have examined long-duration continuous exercises, and the majority of studies used an incremental protocol. In addition, the latest position stand on β-alanine reported that more research is necessary to determine the effects of β-alanine on endurance performance beyond 25 min in duration (Trexler et al., 2015).

Therefore, the aim of this study was to investigate the effects of β-alanine supplementation on a 10 km running time trial and lactate concentration in physically active adults.

Experimental Approach to the Problem

This study used a randomized, double-blind, crossover design (Figure 1). The participants were divided randomly into: β-alanine group and placebo group. All subjects performed the same running training protocol during the study. The subjects completed 10-km running tests and blood lactate concentration was measured after the 10-km tests before and after 23 days of supplementation.

Sixteen healthy men (Table 1) were recruited for this study. As inclusion criteria were defined: (i) at least 6 months of running experience, (ii) personal best time in 10-km between 55 and 65 min; and (iii) performing at least two to three training sessions per week. Subjects were instructed not to use any supplements or ergogenic substance during the experimental protocol. We excluded subjects that were absent in 25% of the training sessions, and/or did not take the supplement as prescribed and/or changed their normal diet. Subjects with pre-existing illnesses that would impair training or those without a medical approval form were also excluded. All experimental procedures were approved by the University Ethical Committee under protocol number CAAE: 38414814.3.0000.0089. Informed consent was obtained from all individual participants included in the study.

TABLE 1. General characteristics of the sample.

All tests were conducted during the weekend on the same day and at the same hour. The 10-km running test was performed at baseline and after 23 days. Subjects performed a 5 min warm up and 5-min stretch and were informed about the running course and procedures. Time in the 10-km running test was measured and registered by a member of the research team who was waiting for the subjects at the end of the course. Subjects were instructed to wear the same kind of clothing (light shorts, light t-shirt, and running shoes) in every test. Tests were executed at the same time of the day, temperature, and humidity conditions, according to the CGE (official local weather forecast information). Blood lactate concentration was measured through the collection of a drop of blood from the fingertip on a reagent strip using a Roche portable lactate analyzer. The analyses were collected immediately after the 10-km running tests.

All groups received a standard training program with duration of 23 days, three running sessions per week on non-consecutive days. On the first day of each week, subjects were instructed to run a moderate volume (7 km). On the second day of training, the participants performed six sprints of 500 m at maximum speed with a 2 min recovery interval between sprints. On the third of training, the volunteers ran a long distance (12 km). To ensure that the running training protocol was appropriate, all routine were supervised by researchers. When the participants ran a long distance, trained monitors were positioned each 1000 m across distance to better control.

A 2 × 2 (group × moment) repeated measures analysis of variance (RMANOVA) with the Bonferroni adjustment for multiple comparisons was used to compare lactate concentration and performance. For all measured variables, the estimated sphericity was verified according to the Mauchly’s W test and the Greenhouse–Geisser correction was used when necessary. The partial eta-squared (η2) was calculated for moment. The confidence intervals (CI-95%) was calculated and effect size for performance and lactate concentration was calculated via Cohen’s d [(treatment mean - placebo mean)/pooled SD] whereby a value of >0.20 was considered small, >0.50 moderate, and >0.80 large. Statistical significance was set at p < 0.05. The data were analyzed using Statistic software (version 10).

Table 1 presents the mean and SD values for age, body weight, and height at baseline in the placebo and beta-alanine groups. There were no statistically significant differences between groups at baseline for any variable investigated.

Figure 2 shows the differences in performance and delta for time between the placebo and β-alanine groups. 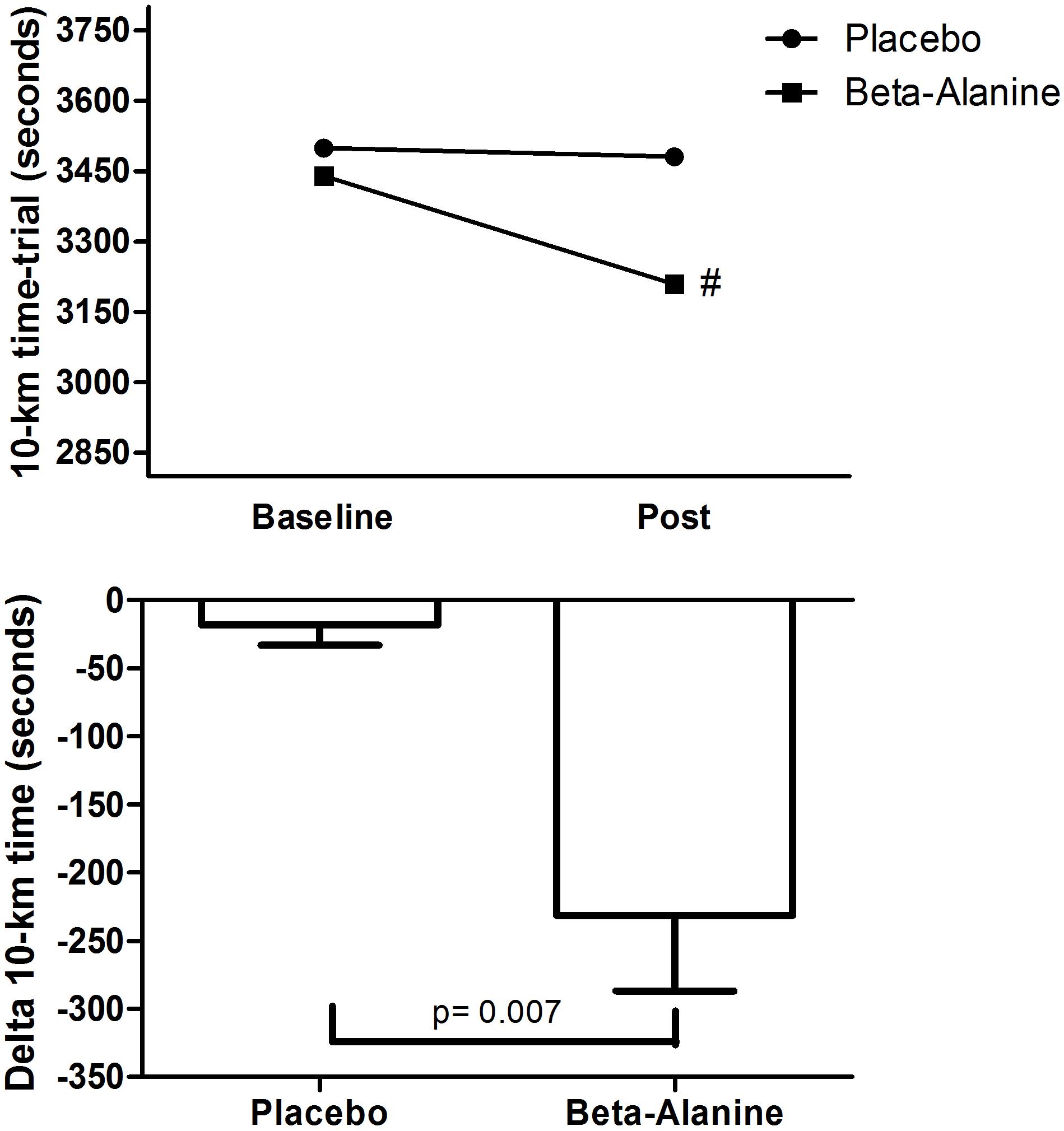 FIGURE 2. Comparison between placebo and beta-alanine group according to 10-km running performance. 1-A = Time to complete the 10-km at baseline and final (seconds); 1-B (Delta, time post-final minus time at the baseline value). #Bonferroni’s test with p < 0.05 compared to baseline.

Figure 3 presents the differences in the lactate concentration between the placebo and β-alanine groups. 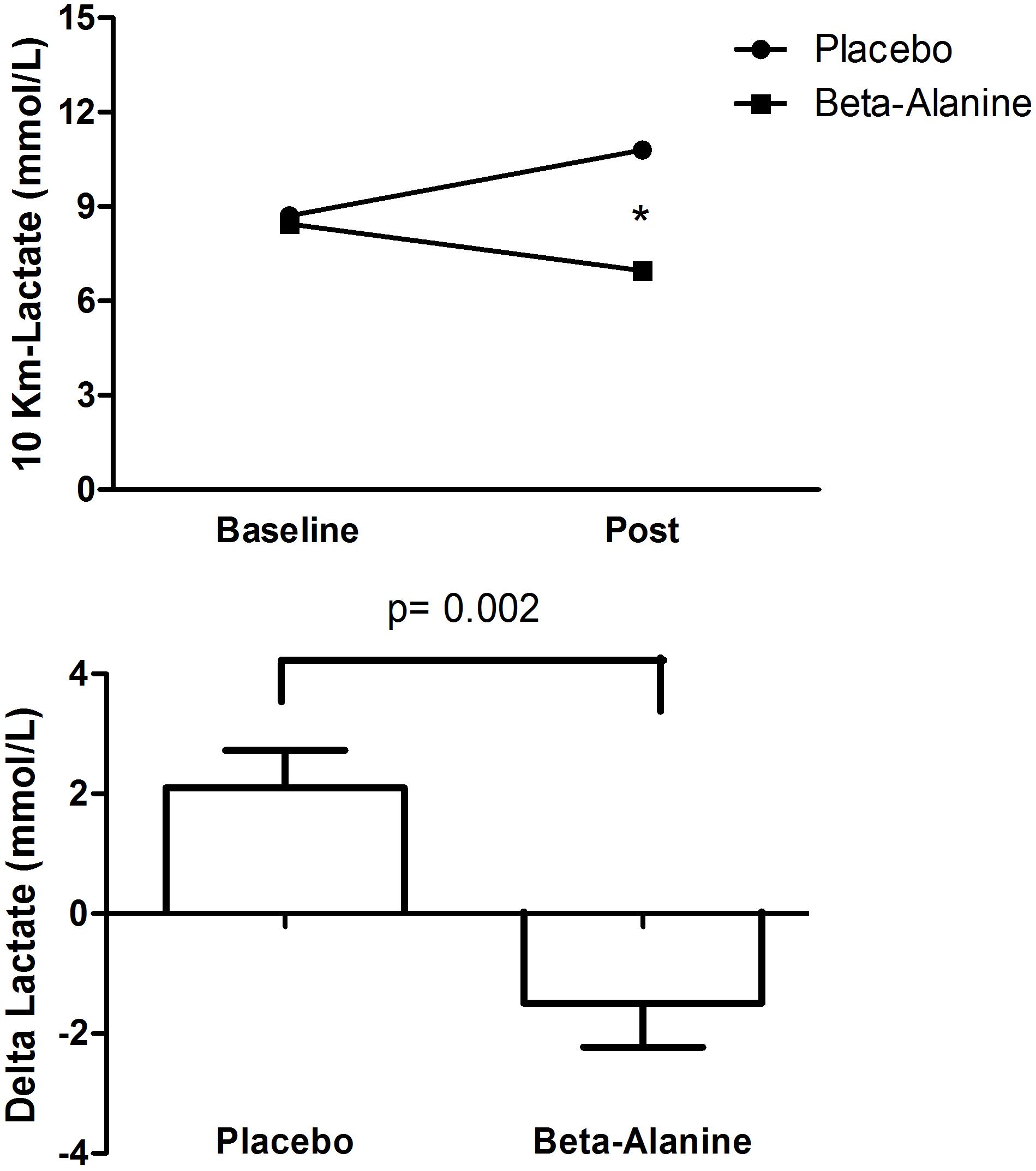 The ergogenic effect of β-alanine supplementation is widely due to the increase in intramuscular carnosine content, which improves skeletal muscle buffering capacity (Culbertson et al., 2010). Although long-distance running relies mainly on aerobic energy metabolism, some studies have demonstrated that mean running speed in prolonged running is dependent on lactate concentration, showing an association between lower lactate accumulations and higher running speed and anaerobic threshold (Sjodin and Jacobs, 1981; Fohrenbach et al., 1987; Tanaka, 1990). Our findings showed that β-alanine supplementation decreased lactate concentration after a 10-km running trial, suggesting that the improvement in performance was due in part to lower blood lactate accumulation.

Previous studies have investigated the influence of β-alanine on lactate accumulation during exercise. Glenn et al. (2015) found that β-alanine supplementation (four doses/day with 800 mg beta-alanine + 8 g dextrose) for 28 days increased by 23% a cycling test to exhaustion (equivalent to 120% maximal oxygen uptake) in female cyclists. In addition, they observed 24% lower lactate concentrations after the supplementation protocol. These findings corroborate with others (Jordan et al., 2010; Ghiasvand et al., 2012), showing that β-alanine can reduce blood lactate concentration during incremental running test. We hypothesize that the increase in 10-km running performance after β-alanine supplementation observed in the present study may be in part due to the increased muscular buffering capacity, mainly through lower demand on anaerobic glycolysis, generating lower lactate accumulation.

Furthermore, long running duration induced physiological and neuromuscular alterations that impair running speed (Davies and Thompson, 1986; Giandolini et al., 2016). There is a reduction in Ca2+ sensitivity and release from sarcoplasmic reticulum during prolonged running (Leppik et al., 2004), resulting in impaired interaction between actin-myosin filaments and lower force output (Homsher et al., 1996; Linari et al., 2015). Lower muscular excitability induced by prolonged running may be associated with the reduction in muscle glycogen and higher production of reactive oxygen species (ROS) (Duhamel et al., 2006; Gomez-Cabrera et al., 2006; Mrakic-Sposta et al., 2015). In this context, the increase in muscle carnosine induced by β-alanine supplementation attenuated fatigue, not only through its buffering capacities, but also its ability to improve myofibrillar Ca2+ release and sensitivity (Sale et al., 2010; Dutka et al., 2012). In addition, carnosine has also been reported to decrease ROS production, with an anti-oxidant activity (Kohen et al., 1988; Calabrese et al., 2005; Hipkiss, 2010). We hypothesize that the improvement in 10-km running performance induced by β-alanine supplementation in this study could also be explained by the effect of carnosine on intramuscular calcium influx and anti-oxidant activity, delaying neuromuscular fatigue. However, more studies are needed to better understand this mechanism.

Despite the importance of this study, some limitations need to be mentioned, such a lack of intramuscular analysis, muscle carnosine concentration, and muscle buffering capacity. Therefore, we suggest further research to analyze the effects of β-alanine supplementation on running time trials over different distances and investigate muscular adaptations in different populations, such as athletes.

Copyright © 2018 Santana, de Freitas, dos Santos, Rossi, Lira, Rosa-Neto and Caperuto. This is an open-access article distributed under the terms of the Creative Commons Attribution License (CC BY). The use, distribution or reproduction in other forums is permitted, provided the original author(s) and the copyright owner(s) are credited and that the original publication in this journal is cited, in accordance with accepted academic practice. No use, distribution or reproduction is permitted which does not comply with these terms.