The editor and reviewers' affiliations are the latest provided on their Loop research profiles and may not reflect their situation at the time of review.

Systemic uncontrolled inflammatory response, also termed as sepsis, is responsible for many mortalities. Bacterial endotoxin, lipopolysaccharide (LPS), is a major cause of sepsis in endothelial cells. Even though a lot of research has been done to define underlying mechanisms of LPS induced sepsis, the role of long non-coding RNAs (lncRNAs), a group of >200 kb RNAs in sepsis is not well-defined. Expression of pro-inflammatory mediators IL6, ICAM1, and VCAM1 (which encodes interleukin-6, intercellular adhesion molecule-1, and vascular cell adhesion molecule-1, respectively) were determined following LPS treatment of human dermal microvascular endothelial cells (HMECs) for 24 h to confirm sepsis induction. RNA immunoprecipitation (RIP) analysis was performed using the chromatin modifying proteins (CMPs), heterogeneous nuclear ribonucleoprotein (hnRNP) K and corepressors of the RE-1 silencing transcription factor (coREST) as individual baits. Quantitative real time polymerase chain reaction (qRT-PCR) was performed on RNA isolated from immunoprecipitated pellets for six different lncRNAs. The effect of the differentially expressed lncRNAs were determined by ectopic overexpression of the lncRNAs before induction of sepsis. Expression of IL6, ICAM1, and VCAM1 were significantly upregulated following treatment of the HMECs with LPS for 24 h confirming induction of sepsis. RIP and qRT-PCR analysis revealed that the lncRNAs HULC, UCA1, and MALAT-1 were significantly enriched with the CMPs after sepsis. RNA interference using siRNAs targeting HULC and UCA1, but not MALAT-1, decreased the expression of IL6, ICAM1, and VCAM1 to endogenous levels. Our results were further validated in an in vivo model of sub-lethal LPS-induced sepsis, whereby siRNA mediated knockdown of UCA1 and HULC lncRNAs prevented induction of VCAM1, ICAM1, and IL6, as assayed by immunohistochemistry. Cumulatively, these results suggest that LPS induced in vitro sepsis in endothelial cells and induction of pre-inflammatory mediators are at least in part due to increased expression of the UCA1 and HULC lncRNAs.

Sepsis is an uncontrolled systemic inflammatory response that can affect multiple organs in the body and is a major cause of worldwide mortality (Dauphinee and Karsan, 2006; Vincent et al., 2011; Randolph and McCulloh, 2014). When lipopolysaccharide (LPS), present within the cell wall of Gram-negative bacteria, encounters endothelial cells, a signaling cascade is induced resulting in sepsis (Dauphinee and Karsan, 2006) in initiated.

It is well documented that abnormal expression of both small (<200 kb) and long (lncRNA; >200 kb) non-coding RNAs (ncRNAs) is associated with different human diseases (Bussemakers et al., 1999; Srikantan et al., 2000; Iacoangeli et al., 2004; Petrovics et al., 2004; Gupta et al., 2010). In fact, lncRNA expression also seems to be involved in normal development processes as is evidenced by impaired neuronal development by knockdown of either Pantr2 (linc-Brn1b) or Evf2 (Bond et al., 2009; Sauvageau et al., 2013). Given the central role of LPS in mediating sepsis and septic shock it is not surprising that the mechanisms regulating the pathophysiology of sepsis has been studied in detail (Beck et al., 2006; Singh et al., 2016; Yu et al., 2017).

However, beyond a few studies (Singh et al., 2016; Chowdhury et al., 2017), including one which showed that the lncRNAs EGO (NONHSAT087634) and HOTAIRM1 (NONHSAT119666) are alternatively spliced and that expression of lnc-IL7R is increased during LPS induced sepsis (Chowdhury et al., 2017), not much is known about how altered lncRNA expression is related to pathophysiology of sepsis. HULC (highly upregulated in liver cancer) is a 16 kb lncRNA at chromosomal location 6p24.3 and is has been shown to be overexpressed in patients with liver cancer (Ruan et al., 2018). LncRNA urothelial carcinoma-associated 1 (UCA1) at chromosomal location 19p13.12 was initially identified in human bladder carcinoma but plays widespread role in inflammation and tumorigenesis (Liu et al., 2019). It has been shown to regulate Hippo signaling pathway as well as miRNA sponge function of miR-96 and miR-135a (Liu et al., 2019). Hence, our goal was to identify putative role of lncRNA in LPS-induced sepsis.

RNA Isolation From Immunoprecipitates and qRT-PCR 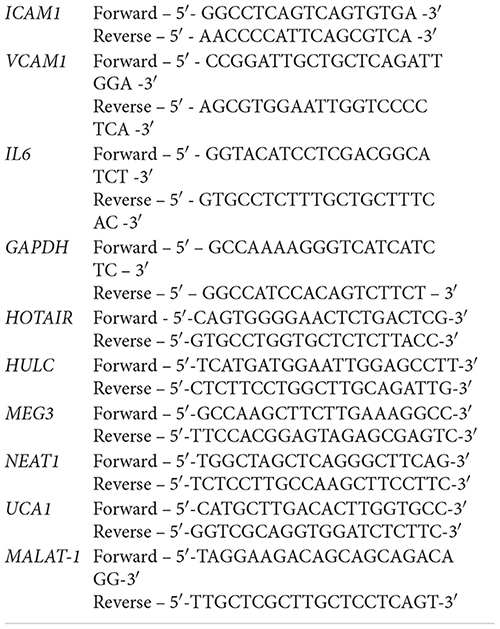 ICAM1, VCAM1, and IL6 expression levels were calculated by the 2-ΔΔCt method. GAPDH was used as an endogenous control for data normalization. The data was also re-analyzed with 18s rRNA and did not show any difference as when GAPDH was used (data not shown). Relative enrichment of lncRNAs in RIP analysis was performed based on normalization to enrichment with just IgG.

Data is represented as mean ± standard deviation (SD). Statistical significance was determined by the two-tailed Student’s t-test. A P < 0.05 was considered as statistically significant.

RNA immunoprecipitation was performed using anti-hnRNP K, anti-coREST, and the corresponding IgG antibodies from lysates obtained from untreated and LPS treated HMEC cells. Immunoprecipitation in each case was confirmed by immunoblotting (Figure 2A). Relative enrichment, compared to IgG, for HOTAIR, HULC, MEG3, NEAT1, UCA1, and MALAT-1 lncRNAs were determined in hnRNP K (Figure 2B) and co-REST (Figure 2C) immunoprecipitates-derived RNA. HULC, UCA1, and MALAT-1 were significantly enriched in both RIP profiles (P < 0.05 in each case compared to RIP from lysates obtained from untreated cells). There was no significant difference in enrichment obtained in the LPS treated lysates with hnRNP K or coREST antibodies, indicating equivalent affinity for the lncRNAs for the CMP components.

We next wanted to determine if there was a correlation between induction of the proinflammatory markers and increase in lncRNA enrichment in the CMP complex, we transiently transfected the HMECs with either a control scramble siRNA or two independent siRNAs targeting either MALAT-1, UCA1, or HULC. Seventy-two hours post-transfection, the HMECs were either left untreated or treated with LPS for an additional 24 h. Quantitative RT-PCR was performed to confirm successful silencing of the lncRNA expression by the respective siRNAs. Compared to the control scramble siRNA, the siRNAs specific to MALAT-1, UCA1, or HULC, respectively, significantly down regulated the expression of MALAT-1, UCA1, and HULC in LPS-treated HMECs (Figure 3).

Figure 4. Downregulation of UCA1 and HULC, but not MALAT-1, using siRNAs inhibits sepsis associated induction of ICAM1, VCAM1, and IL6. Expression of ICAM1, VCAM1, and IL6 mRNAs were determined by qRT-PCR in HMECs, either mock transfected or transfected with siRNAs targeting MALAT-1 (A), UCA1 (B), and HULC (C). Data represent mean ± standard deviation of three independent experiments, post-normalization to GAPDH expression. ∗P < 0.05, compared to LPS treated HMECs with no siRNA transfection.

Figure 5. Downregulation of UCA1 using siRNA inhibits sepsis associated induction of ICAM1, VCAM1, and IL6 in vivo. The aorta was isolated and the expression levels of ICAM1, VCAM1, and IL-6 were detected by immunohistochemical staining with IHC. Shown are representative images obtained at 100× magnification (inset 400× magnification) of aortic tissue in indicated experimental groups stained with antibody against (A) ICAM1, (B) VCAM1, and IL6 (C). (D) Quantification of images obtained from 6 animals of each experimental group. ∗P < 0.05, compared to corresponding specimen in +LPS + siRNA-scramble control group.

Figure 6. Downregulation of HULC using siRNA inhibits sepsis associated induction of ICAM1, VCAM1, and IL6 in vivo. The aorta was isolated and the expression levels of ICAM1, VCAM1, and IL-6 were detected by immunohistochemical staining with IHC. Shown are representative images obtained at 100× magnification (inset 400× magnification) of aortic tissue in indicated experimental groups stained with antibody against (A) ICAM1, (B) VCAM1, and IL6 (C). (D) Quantification of images obtained from 6 animals of each experimental group. ∗P < 0.05, compared to corresponding specimen in +LPS + siRNA-scramble control group.

It has been shown comprehensively that lncRNAs regulate gene expression during development, normal physiological processes and in aberrant disease contexts (Perez et al., 2008; Guttman et al., 2011). Even though lncRNAs do not encode protein products changes in their levels of expression seem to regulate expression of messenger RNA targets in these scenarios.

The results from the current study show that along with lnc-IL17R (Chowdhury et al., 2017), lncRNAs MALAT-1, HULC, and UCA1 are also upregulated during LPS induced sepsis. Among the upregulated lncRNAs, HULC and UCA1 seem to regulate induction in expression of the messenger RNAs for the proinflammatory interleukin-6 (IL-6), intercellular adhesion molecule-1 (ICAM-1), and vascular cell adhesion molecule-1 (VCAM-1). Given our in vivo results it seems that targeted knockdown of HULC and UCA1 might be a viable therapeutic option for sepsis, even though long-term stability and directed organ-specific delivery will be potential problems.

It remains to be determined how, if at all, upregulation of MALAT-1 impinges on LPS induced sepsis. It is highly possible that there are other targets whose expression is also modulated following induction in expression of the HULC, UCA1, and MALAT-1 lncRNAs during sepsis in endothelial cells. This becomes even more important because it has been shown that MALAT-1 actually mediates inflammation in traumatic brain injury. It also remains to be determined if the identity of the lncRNAs and their gene targets remain same across different forms of sepsis, and during LPS induced sepsis in vivo. The CRNDE lncRNA has been shown to trigger inflammation through the TLR3-NF-κB cytokine signaling pathway. Whether CRNDE is involved in sepsis remains to be determined.

The current study does suffer from some technical limitations. Foremost is RIP was performed using two of the four components of the CMP complex. Whether similar enrichment of lncRNAs are observed when RIP is performed using Sin3A and polycomb repressor complex 2 is imperative to determine as affinity of the lncRNAs might not be the same for all four components of the CMP. Additionally, it remains to be determined if other lncRNAs are also involved in the pathogenesis of sepsis.

In addition, RNAseq or lncRNA microarray should be performed on the RIP immunoprecipitates to identify the entire cohort of differentially enriched lncRNAs. Finally, we evaluated lncRNA enrichment in the CMP complex at one dose and one time point post-LPS treatment. It remains to be determined if the lncRNAs’ enrichment within the CMP complex is time and dose dependent following treatment with LPS.

The study was approved by IACUC of The First Hospital of Jilin University.

Copyright © 2019 Chen, Fu, Song and Li. This is an open-access article distributed under the terms of the Creative Commons Attribution License (CC BY). The use, distribution or reproduction in other forums is permitted, provided the original author(s) and the copyright owner(s) are credited and that the original publication in this journal is cited, in accordance with accepted academic practice. No use, distribution or reproduction is permitted which does not comply with these terms.