Lepidoptera is the second largest insect group, including about 150,000 species in the world. Therein, it is common that two and more species share the same geographical location and occurrence time. For these sympatric species, the species-specific sex pheromones in addition to morphological and physiological characteristics, play an important role in the reproductive isolation (Roelofs et al., 2002; Allison and Cardé, 2016). The Lepidoptera sex pheromones have been identified from virgin female moths of more than 660 species, and almost all insects have a multicomponent pheromone system (Ando and Yamakawa, 2011; Ando, 2018). The sex pheromones in different species are mainly diverse in chemical structure and composition of the pheromone components. In addition, some relative species that share same components, the differences in ratio of the components could be largely responsible for reproductive isolation, such as the case of Helicoverpa armigera and H. assulta. These two sibling species share the same two sex pheromone components of Z9-16:Ald and Z11-16:Ald, but in opposite ratios (Piccardi et al., 1977; Nesbitt et al., 1980; Kehat and Dunkelblum, 1990; Sugie et al., 1991; Li et al., 2017).

It worth noting that, in hundreds of identified pheromone components in Lepidoptera, many components are shared by several and even tens of different species (Ando, 2018). Of these species that are sympatric, the species specific components may contribute to the reproductive isolation (Linn et al., 1986; Saveer et al., 2014). Some field trapping studies have suggested that one species can recognize sex pheromone component of other sympatric species. A specific pheromone component of H. virescens, Z9-14:Ald, played an intraspecific role in sexual communication, and also served as behavioral antagonist for H. zea to avoid the cross-attraction (Haile et al., 1973; Roach, 1975; Carpenter et al., 1984; Hansson et al., 1986; Grant et al., 1987; Christensen et al., 1990). As a minor component of the sex pheromone in Chilo suppressalis, Z11-16:OH did not increase the attractiveness of the pheromone for conspecific males in the field, but did increase the sex pheromone specificity (Chen et al., 2018). Similarly, Z3,Z13-18:OAc of Synanthedon scoliaeformis is a behavioral antagonist against S. tipuliformis males, and E3,Z13-18:OAc of S. tipuliformis is an antagonist against S. scoliaeformis males (Mozūraitis and Būda, 2013).

The two Spodoptera species, the beet armyworm (S. exigua Hübner) and the tobacco cutworm (S. litura Fabricius), are both polyphagous agricultural pests worldwide. They share a similar geographic distribution and broadly occurrence time in China and many other countries. Furthermore, the two species have a common sex pheromone component Z9,E12-14:OAc, while each species also uses some specific components. In S. exigua, several pheromone components, Z9,E12-14:OAc, Z9-14:OH, Z11-16:OAc, Z9-14:OAc, and Z9,E12-14:OH, were identified successively in the female pheromone glands of different populations (Persoons et al., 1981; Tumlinson et al., 1981, 1990; Mochizuki et al., 1993; Mitchell and Tumlinson, 1994; Dong and Du, 2002), with the former three components at the ratio of 7:3:1 attracting the most number of males in east Asia (Jung et al., 2003; Zhao et al., 2018). Different from S. exigua, the female S. litura showed highest attraction for males with Z9,E11-14:OAc and Z9,E12-14:OAc in a ratio of 9:1 (Tamaki et al., 1973). It has been well documented that males of the two species are able to recognize and behaviorally attracted by their species-specific sex pheromones without cross-attraction, and therefore, we hypothesize that males of these two species may mutually recognize the species-specific components of its sympatric counterpart, and thus to strengthen the behavioral isolation between the two sibling species.

To verify the above hypothesis, we in the present study, measured the mutual recognition of sex pheromone components between S. litura and S. exigua on both physiological and behavioral levels, providing evidence that males of the two Spodoptera species can recognize the species-specific components of its sympatric counterpart.

Larvae of Spodoptera litura and S. exigua were collected in flowering cabbage fields of Nanjing (Jiangsu province, China; 32.01°N, 118.63°E). The larvae were fed on an artificial diet in the laboratory in 14L:10D at 26 ± 1°C and 65 ± 5% relative humidity (Huang et al., 2002). Pupae were separated by sex and placed in separate cages. After the pupae emerged, the moths were fed with 10% honey solution.

Solutions of the four pheromone components (Z9,E12-14:OAc, Z9-14:OAc, Z11-16:OAc, and Z9,E11-14:OAc) were prepared in distilled hexane at different concentrations (0.01, 0.1, 1.0, 10, and 100 ng/μl). Antennae of virgin males (2 days after eclosion) were cut off at the base, and the terminal distal segment was excised. The antenna was connected by conductive gel (Spectra 360, Fairfield, NJ, United States) to two electrodes. A filter paper strip (2.5 cm × 1.0 cm) containing 10 μl of a test solution was inserted into a Pasteur pipette. The thin end of Pasteur pipette was placed through a hole in a metal tube, which directed a clean airstream over the antenna. By using an air flow controller (CS-55, Syntech Inc., Netherlands), each test compound was expelled into the airstream by a puff of air (4 ml/sec) through the Pasteur pipette. Compounds were tested from low to high dosage, and ach dosage was tested at least five antenna, with a 10 s interval for recovery of the antenna. The antennal signal was amplified tenfold, and converted to a digital signal by DC amplifier interface (IDAC, Syntech Inc., Netherlands). The signals were recorded with EAGPro software (version 2.0, Syntech Inc., Netherlands).

All field trappings were carried out in asparagus fields of Pinghu (Zhejiang, China; 30.65°N, 121.02°E) between August and September in 2017 and 2018. The synthetic pheromone compounds, Z9,E12-14:OAc, Z9-14:OAc, Z11-16:OAc, and Z9,E11-14:OAc were dissolved in distilled hexane (20 mg/ml). Then related solutions were added to rubber septa (black rubber, 12 mm O.D., Pherobio Inc., Beijing, China) that were used as dispensers. Control septa were loaded with hexane (50 μl) only. After all the hexane was volatilized, each group of rubber septa was packed with seal bag (7 cm × 4 cm) and stored at 4°C until use for field trapping. As a lure, every rubber septa was placed at the center of sticky trap (30 cm × 30 cm bottom plate with a roof, Nimord Inc., Changzhou, China), and were hung separately 1.0 m above ground level at intervals of 10 m. Four replicates for each treatment were tested, and the captured males were counted every week.

Data obtained in each field test were analyzed by one-way ANOVA, and pair wise comparisons among traps were performed with Tukey-Kramer Test with p-values adjusted for multiple comparisons. To homogenize the variance, means were transformed using log(x + 0.5) transformation. All statistical analyses were performed with R version 3.3.2 (R Development Core Team, 2016). 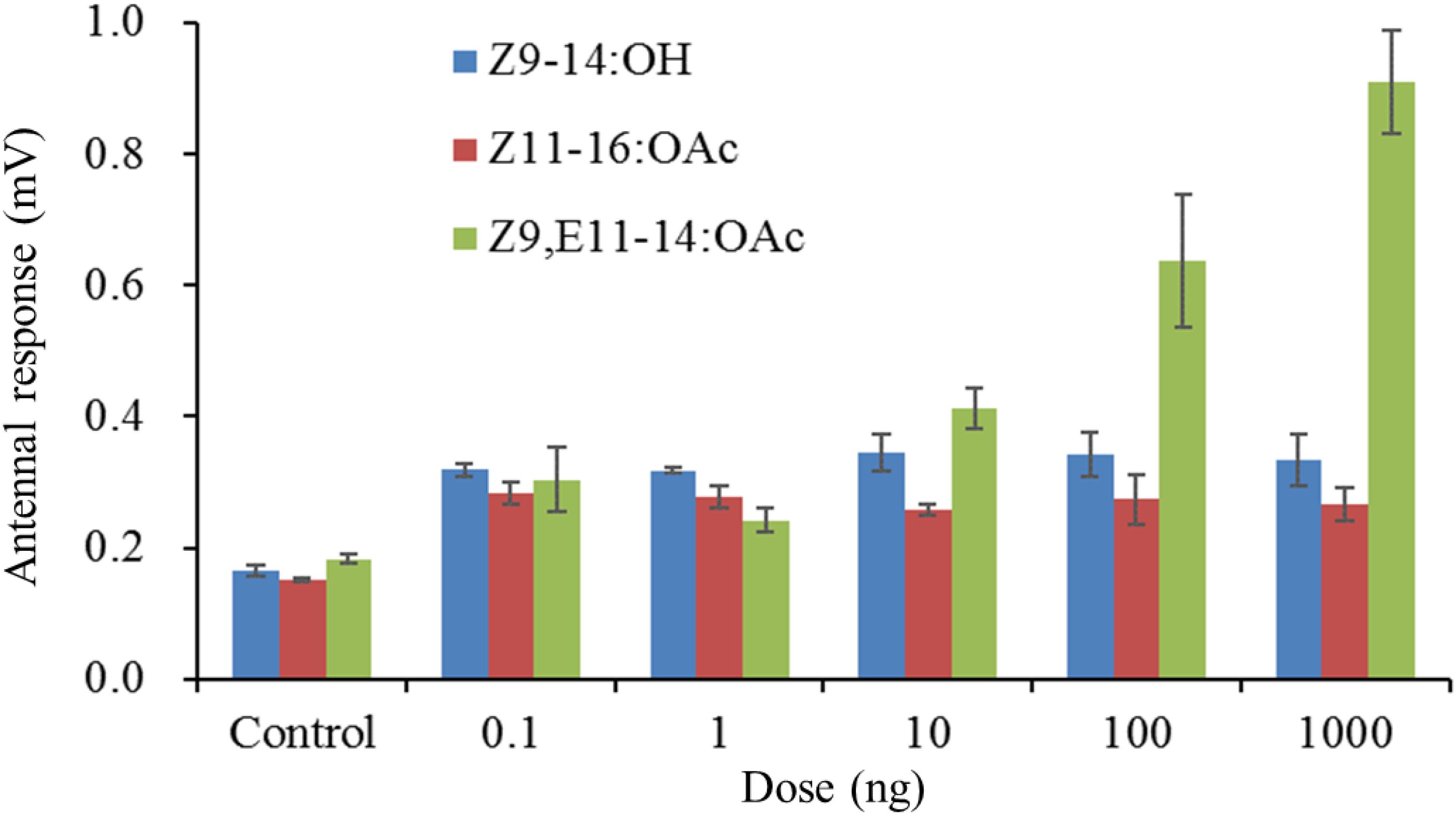 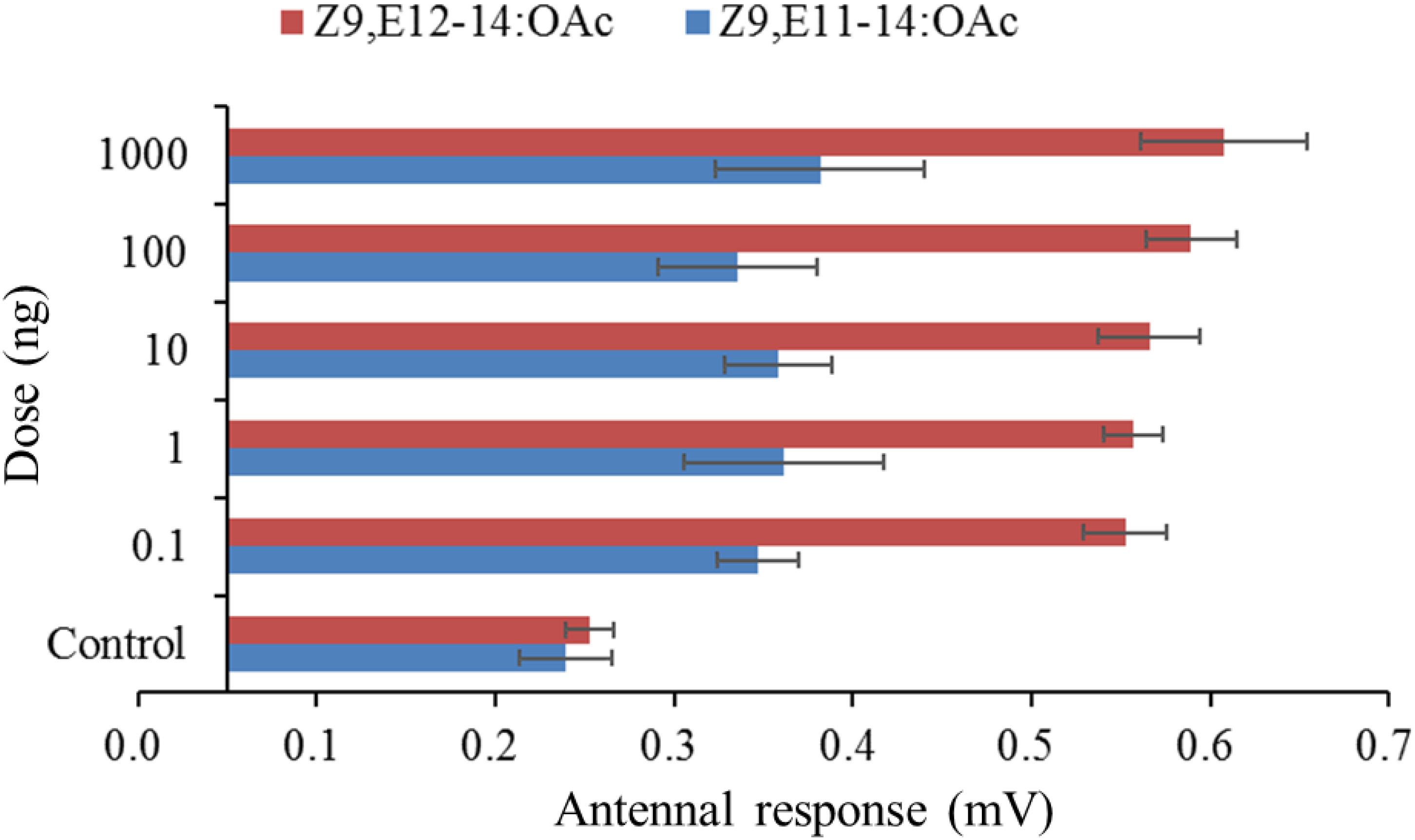 Firstly, it was evaluated regarding the effect of two S. exigua specific components on the attractiveness of S. litura sex pheromone to the conspecific males (Figure 3). The ratio of Z9-14:OH and Z11-16:OAc used in the test was same as that in the pheromone blend of S. exigua. The results were generally consistent over the two test years. Compared to the binary mixture of Z9,E11-14:OAc and Z9,E12-14:OAc (9:1, the sex pheromone of S. litura), the addition of Z9-14:OH into the mixture significantly decreased number of males captured in the trap baited with the pheromone mixture. For the second specific component Z11-16:OAc, inhibition effect was also observed at the high usage of 0.016 mg/septa, while the effect was not significant at the lower usage of 0.003 and 0.03 mg/septa. An exemption was the use usage of 0.003 mg/septa in the 2018 test, where addition of Z11-16:OAc to the binary mixture increased the male catches (Figure 3B). When both Z9-14:OH and Z11-16:OAc mixed with the sex pheromone of S. litura, this inhibition effect was more significant, showing that the numbers of captured males were significantly lower at all doses. 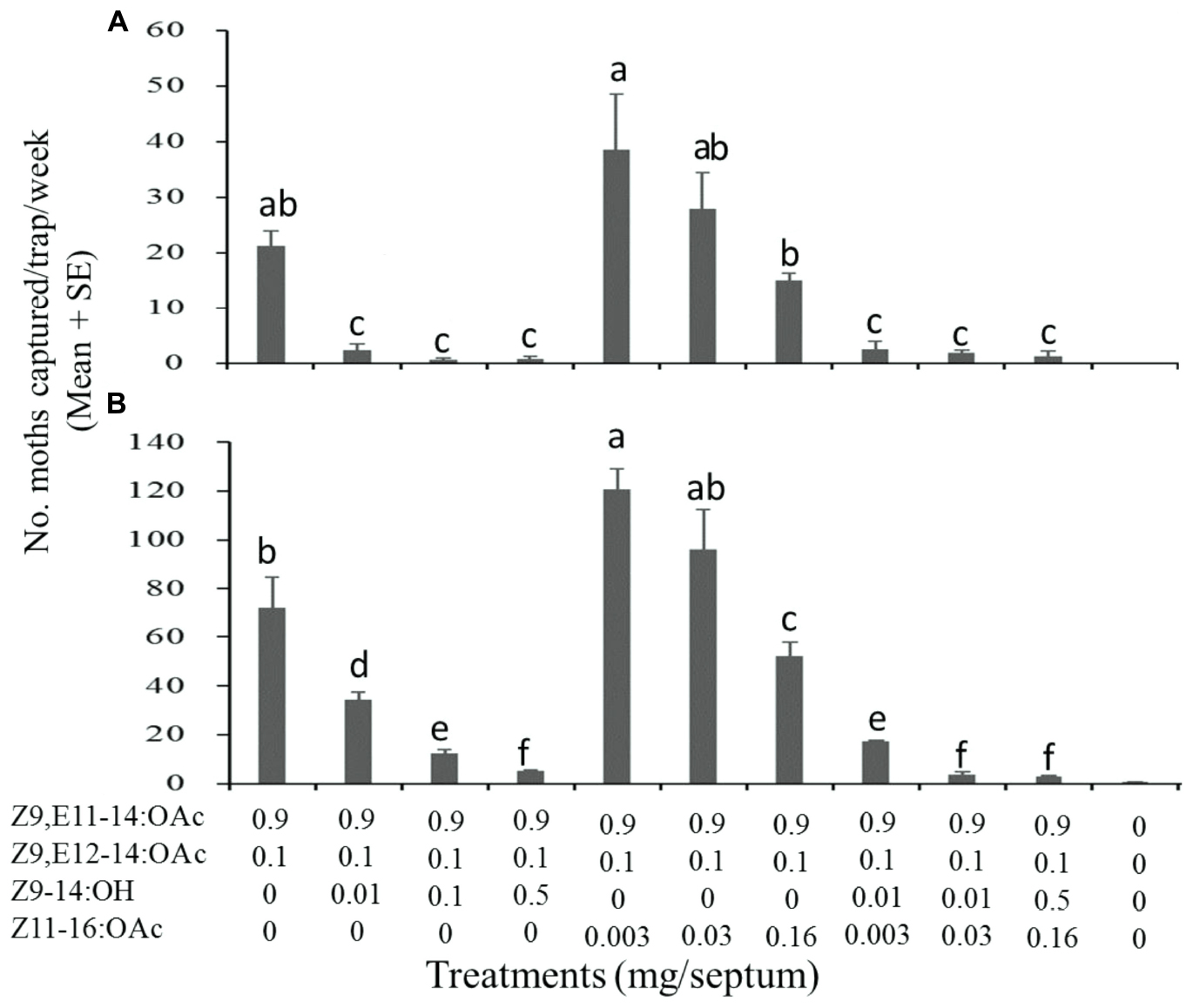 Figure 3. Catches of Spodoptera litura males in asparagus fields in Pinghu city of Zhejiang Province (China) in traps baited with synthetic pheromone components. (A) Test on 16 August-12 September 2017, 4 replicates; (B) Test on 19 August-17 September 2018, 4 replicates. Values within each test followed by different letter are significantly different at P < 0.01 by Tukey-Kramer Test. 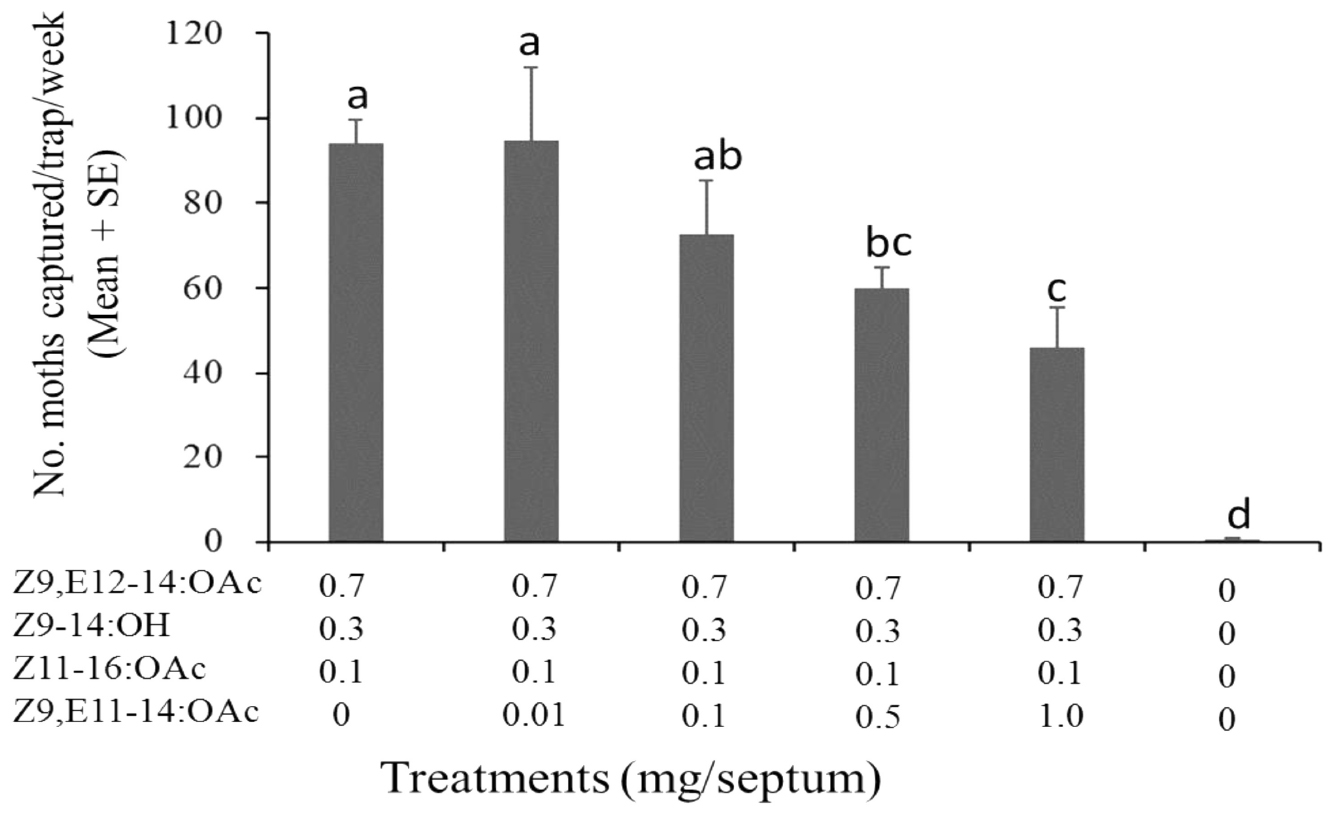 Pheromone signals is an essential component of mate recognition in sexual communication of moths. In some sympatric moth species, filed trapping experiments have shown that specific pheromone components of one species may serve as antagonists for other sympatric species to avoid the cross-attraction (Christensen et al., 1990; Mozūraitis and Būda, 2013; Chen et al., 2018). Our field tests also have shown that there is no cross-attraction between S. exigua and S. litura, when the sex pheromones were employed to attract conspecific males respectively in South China (unpublished data), suggesting that the species specific components play roles in mate recognition. The present study further confirmed at both electro-physiologically and behaviorally that these two sibling species could mutually perceive the specific pheromone components of its sympatric counterpart. Therefore, it is a common phenomenon that sympatric species can distinguish the interspecific pheromone components as behavioral antagonist, in order to avoid the cross-attraction. An interesting example was the sibling species S. littoralis and S. litura, which share four pheromone compounds in pheromone glands, while S. littoralis still has seven more compounds; however, S. litura males did not discriminate between conspecific and heterospecific calling females (Saveer et al., 2014), suggesting that S. litura males could not recognize the specific pheromone components of S. littoralis.

Over the past few decades, the different techniques of insect sex pheromone were used for control of insect pests including Spodoptera spp., in which the mating disruption has been the most successful technique (Cardé and Minks, 1995; Witzgall et al., 2010; Guerrero et al., 2014). However, the utilization of this technique has rarely targeted multiple species simultaneously. Compared to the species-specific sex pheromones of S. exigua or S. litura alone, the combined lure, which mixed two species’ sex pheromones, completely attracted none males of S. litura, and the male catches of S. exigua significantly decreased. This provides us an attractive possibility that mating disruption can be used to target two and more sympatric species by carefully select pheromone component(s) that are recognized by those insect species.

The males of S. litura and S. exigua could perceive pheromone components of its relative counterpart and reduce behavioral response to its own pheromone blend when mixed with component(s) of its relative counterpart. Our present study provides an evidence that two sympatric moth species can mutually recognize the interspecific sex pheromones. This mutual recognition would be of great significance for the reproductive isolation, especially for the phylogenetically closed and sympatric species that are more likely share one or more sex pheromone components and employ behavioral isolation as a key mechanism in the reproductive isolation.

All datasets generated for this study are included in the manuscript/supplementary files.

QY and S-LD conceived and designed the experiments and wrote the manuscript. X-LL and X-QT performed the electroantennogram experiments. J-YD, Y-LW, and Z-JS arranged the field tests and preliminary data analysis. QY, X-LL, and S-LD worked on data analysis. All authors reviewed the final manuscript.

The authors thank the two reviewers for their helpful comments on this manuscript.

Copyright © 2019 Yan, Liu, Wang, Tang, Shen, Dong and Deng. This is an open-access article distributed under the terms of the Creative Commons Attribution License (CC BY). The use, distribution or reproduction in other forums is permitted, provided the original author(s) and the copyright owner(s) are credited and that the original publication in this journal is cited, in accordance with accepted academic practice. No use, distribution or reproduction is permitted which does not comply with these terms.