TFII-I is a ubiquitously expressed transcription factor that positively or negatively regulates gene expression. TFII-I has been implicated in neuronal and immunologic diseases as well as in thymic epithelial cancer. Williams–Beuren Syndrome (WBS) is caused by a large hemizygous deletion on chromosome 7q11.23 which encompasses 26–28 genes, including GTF2I, the human gene encoding TFII-I. A subset of WBS patients has recently been shown to present with macrocytosis, a mild anemia characterized by enlarged erythrocytes. We conditionally deleted the TFII-I/Gtf2i gene in adult mice by tamoxifen induced Cre-recombination. Bone marrow cells revealed defects in erythro-megakaryopoiesis and an increase in expression of the adult β-globin gene. The data show that TFII-I acts as a repressor of β–globin gene transcription and that it is implicated in the differentiation of erythro-megakaryocytic cells.

Previous genomic and proteomic analysis of TFII-I revealed that it interacts downstream of Pol II peaks at several stress response genes in human erythroleukemia K562 cells (Fan et al., 2014). Among stress induced genes bound by TFII-I in erythroid cells are the ATF3 gene and the gene encoding the heme-regulated inhibitor (HRI), an eIF2 α kinase that inhibits translation in response to heme depletion (Chen, 2014). Both ATF3 and HRI have been implicated in the regulation of globin gene expression (Suragani et al., 2012; Hahn and Lowrey, 2013; Grevet et al., 2018). In addition to regulating genes encoding cell cycle modulators or genes responsive to stress, we found that TFII-I interacts with erythroid-specific gene promoters, including that of β-globin and GATA1 (Leach et al., 2003; Fan et al., 2014).

In this study we examined the role of TFII-I during hematopoiesis in mice. We obtained mice that allow conditional (Cre-mediated) ablation of TFII-I gene function (Enkhmandakh et al., 2016) and analyzed bone marrow hematopoiesis after induction of Cre-recombination. The data show that TFII-I deficiency causes an increase in expression of the adult β-globin gene and a mild defect in erythropoiesis. Importantly, we observed an approximately twofold decrease in the formation of megakaryocytes in mice deficient for TFII-I.

We purchased two mouse strains from the Jackson Laboratory. One strain contains two loxP sites surrounding exon 3 of the Gtf2i gene (B6;129S-Gtf2iTM1.1Bdash/J, referred to as Gtf2i-floxed) and another which expresses a Cre-ER fusion protein that translocates to the nucleus in response to tamoxifen [B6.Cg-Tg(CAG-cre/Esr1∗)5Amc/J], referred to as CAGGCre-ERTM. The mice were mated to generate heterozygous KO/Gtf2i-floxed mice that are either positive or negative for the Cre gene. The following DNA primers where used for genotyping: GTF2I US: 5′TGTTAGGGCAGGTGATGA, DS: 5′AGCCACTCCAACAGTTACCG; CAG-Cre US: 5′GCTAACC ATGTTCATGCCTTC, DS: 5′AGGCAAATTTTGGTGTACGG. These mice were subjected to intraperitoneal tamoxifen injection (100 μl of a 20 mg/ml tamoxifen solution in corn oil for 10 days). 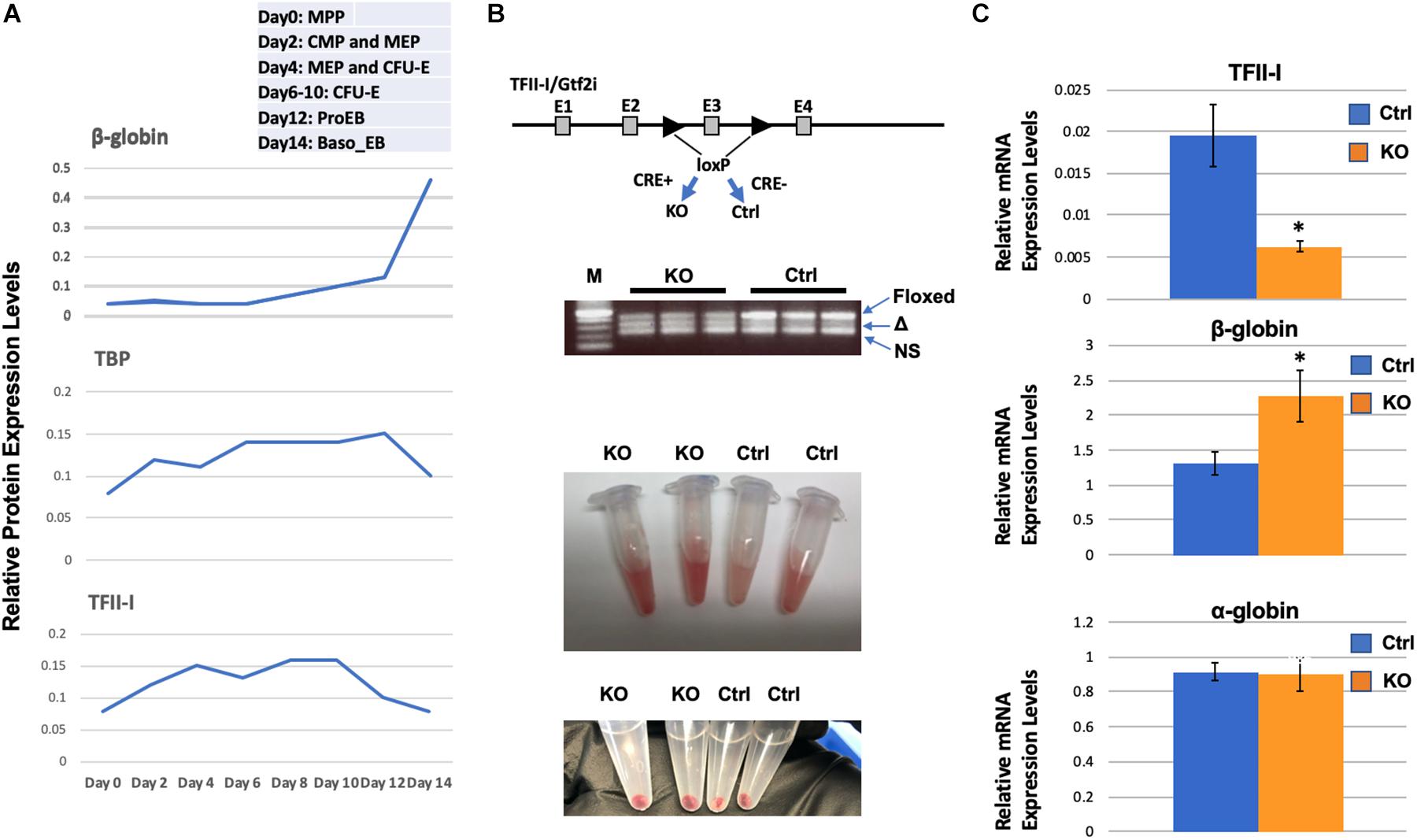 We generated transgenic mice that have exon 3 of the Gtf2i gene flanked with loxP sites and that express the Cre-recombinase in a tamoxifen inducible manner (Figure 1B). In these mice, Cre is fused to the estrogen receptor (ER) and tamoxifen induces nuclear localization. We injected mice positive for Cre and the floxed TFII-I gene locus or as controls, mice that only have the floxed TFII-I gene locus but do not express the inducible Cre. We consistently observed that the bone marrow cells from TFII-I KO mice had a more intense red color compared to cells from control mice (Figure 1B). We subjected cells from bone marrow to RT-qPCR analysis. We found that TFII-I expression was reduced fourfold in the Cre-expressing mice compared to the Cre-negative mice (Figure 1C). Furthermore, TFII-I deficient bone marrow cells exhibited a twofold increase in expression of the adult β-globin gene. However, there was no change in expression of the α-globin genes.

To investigate if the increase in globin gene expression was due to changes in the differentiation profile of the erythroid cells, we examined bone marrow cells by flow cytometry (Figure 2). Previous studies established that CD71, the transferrin receptor, and Ter119 antigens are useful markers for the discrimination of different erythroid maturation stages (Liu et al., 2013). The R1 population (CD71 high, Ter119 low) represents immature erythroid cells, while R2 (CD71 high, Ter119 high), R3 (CD71 intermediate, Ter119 high), and R4 (CD71 low, Ter119 high) represent increasing stages of erythroid maturation. We injected six mice with tamoxifen (three Cre-positive and three Cre-negative mice) for 10 days. Five days after the last injection the mice were sacrificed, and cells were isolated from bone marrow. TFII-I deficient mice revealed a mild but statistically significant change in the differentiation profile of erythroid cells. The R1 population was increased by 50%, the R2 population was increased by 11%, the R3 population was decreased by 34%, and the R4 population was decreased by 35% in TFII-I KO versus control mice. The changes in the R2 and R4 populations were statistically significant with p-values of 0.047 and 0.038, respectively. Moreover, we did observe an about twofold decrease in the number of CD41, integrin alpha chain 2b, positive mature megakaryocytes (47% reduction, p-value of 0.0023). These data show that TFII-I deficient mice exhibit a defect in erythro-megakaryocytic cell differentiation. 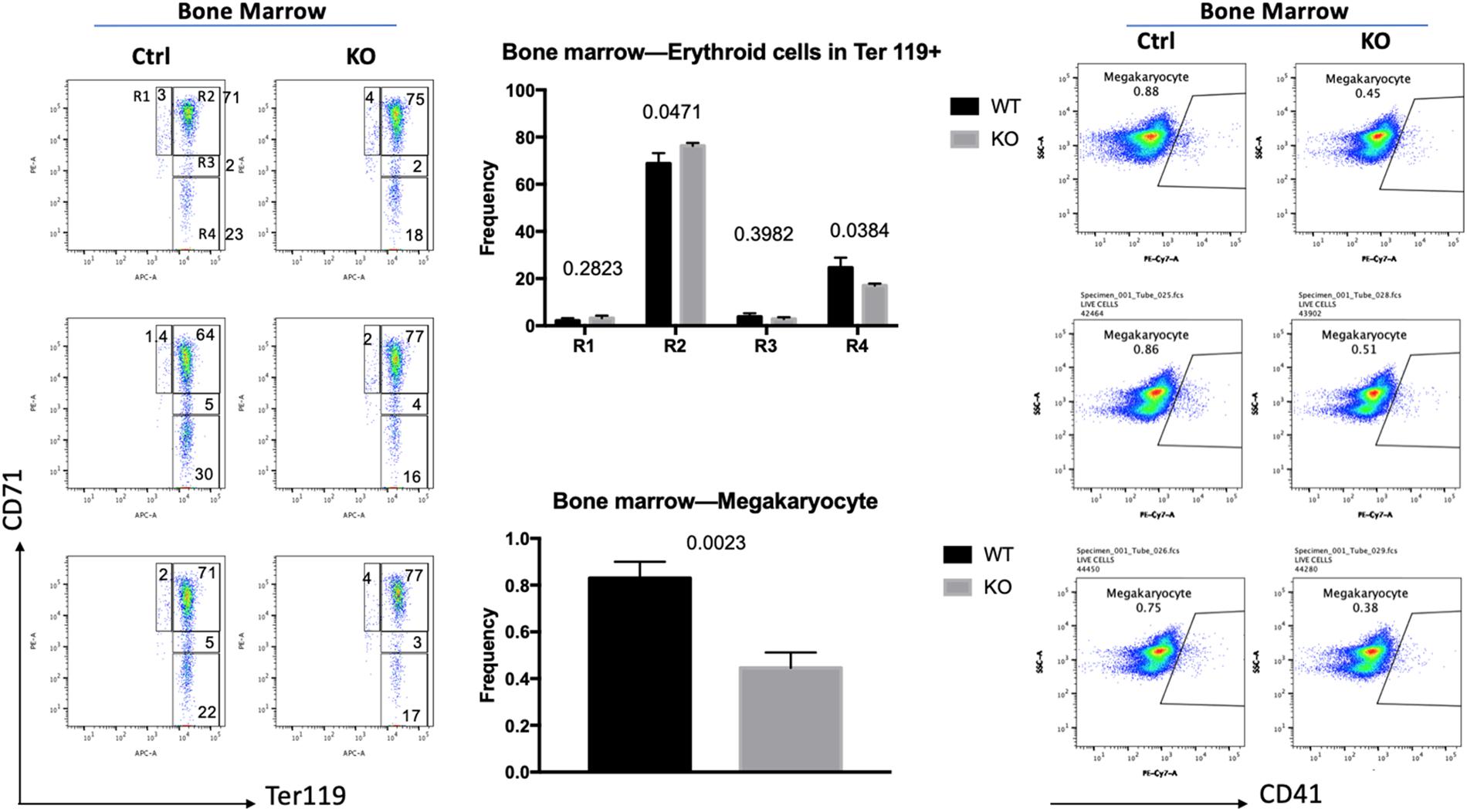 Figure 2. Flow cytometry analysis of TFII-I KO and control bone marrow cells. BM cells isolated from three KO and three control mice (Ctrl) were subjected to flow cytometry analysis using CD71 and Ter119 antibodies (left) or CD41 antibodies (right). The numbers on top of the bars in the middle represent the p-values (error bars derived from three KO and three control mice, n = 3; p-values are shown on top of the graphs in the middle).

We found that TFII-I deficiency also impaired differentiation of erythroid cells. We detected a statistically significant increase in immature erythroid cells and a decrease in the number of mature erythroid cells. It should be noted that ablation of TFII-I expression was not complete. Complete TFII-I deficiency during erythroid differentiation would be predicted to have a stronger effect on the differentiation of erythroid cells. Perhaps related to our results, a recent study demonstrated that at least a subset of Williams Syndrome patients exhibit mild macrocytic anemia, characterized by enlargement of red blood cells (Yu et al., 2020). Megaloblastic macrocytosis is characterized by slow DNA synthesis, which is interesting with respect to previous data implicating TFII-I in the regulation of genes encoding cell cycle modulators (Roy, 2001, 2012).

In summary, our data implicate TFII-I in the regulation of adult β-globin expression and in the specification of erythro-megakaryocytes.

The animal study was reviewed and approved by University of Florida IACUC.

We thank our colleagues in the JB, ZQ, and JS laboratories for stimulating discussions and Wara Rattanaphong for technical support.

Copyright © 2020 Gurumurthy, Wu, Nar, Paulsen, Trumbull, Fishman, Brand, Strouboulis, Qian and Bungert. This is an open-access article distributed under the terms of the Creative Commons Attribution License (CC BY). The use, distribution or reproduction in other forums is permitted, provided the original author(s) and the copyright owner(s) are credited and that the original publication in this journal is cited, in accordance with accepted academic practice. No use, distribution or reproduction is permitted which does not comply with these terms.