Insects are the most prosperous species on earth. Strong reproductive capacity is one of important factors for insect prosperity. Once the environment is suitable, insects produce a huge quantity of offspring, which causes the population to increase rapidly in a short period, finally leading to pest outbreak and considerable loss of crops. Like that of animals, the reproduction of most insects is sexual mating. Therefore, successful mating plays an important role in the process of insect reproduction. Unlike higher animals, insects, especially Lepidopteran moths, usually employ female sex pheromones as chemical signals for long-distance information exchange (Ando et al., 2004), which is the key factor for male moths to locate female moths.

M. separata larvae were collected from maize field in Jiyuan, Henan province, China. Larvae were maintained with an artificial diet at 28°C with 16 h light/8 h dark photoperiod. Pupae were distinguished by gender and stored in separate cages until emergence. Newly emerged adults in the 1st photophase were referred to as 1 day-old adults and were subjected to subsequent feeding experiment.

The Determination of Trehalose, Pyruvic Acid, and Acyl-CoA Concentration in the PGs

Newly emerged females were collected and placed on a new cage with 5% sugar solution (n ≥ 24). The corresponding control females were also placed on other new cage with water alone. PGs were collected at different time points after feeding with sugar (including 48, 72, and 96 h after feeding with sugar). For starving treatments, the n ≥ 20 newly emerged females (for each treatment) were fed only water for 24, 48, and 72 h later, then refed with 5% sugar solution. PGs were collected 24 h (including one photophase and one night phase) after refeeding to keep the adults had enough time to feed sugar, and biosynthesize sex pheromone. The above harvested PGs were subjected to quantitative determination of the concentrations of trehalose, pyruvic acid, and acyl-CoA by using the concentration determination kits (A149-1-1, A076-1-1, and A081 kit from Nanjing Jiancheng Bioengineering Institute, respectively). The detailed steps followed the manufacturer’s suggestions1 and the previous reports (Du et al., 2017; Jiang et al., 2020; Xu et al., 2020).

The Measurement of Sex Pheromone Production by GC/MS

Newly emerged females were collected and placed on 5% sugar solution (n ≥ 20). The corresponding control females were on water alone. Three replicates were adopted. Prior to collecting PGs, 10 pmol of PBAN was injected into PGs, after 1 h waiting time, PGs were collected at different time points after feeding (including 48, 72, and 96 h after feeding). The harvested PGs were dissolved in hexane and then subjected to further GC/MS analysis as described above (Zhao et al., 2018).

For starving treatment, the n ≥ 20 newly emerged females (for each treatment) were fed only water for 24, 48, and 72 h later, then refed with 5% sugar solution for 24 h, PGs were then collected as the above method, and sex pheromone productions were tested by GC/MS.

Females (n = 30) with sugar feeding at different time points (48, 72, and 96 h after feeding) were place a new cage (40 cm × 40 cm × 40 cm) with same number of males for 24 h. Then, the females were dissected, the proportion of successful mating was determined according to the presence of spermatophore in the bursa copulatrix (Zhao et al., 2018). Three biological replicates of each treatment were done.

Newly emerged females (n ≥ 20) were collected and placed on a new cage with same number of males. In addition, 5% sugar solution was placed on cage to meet the female need to sugar. The corresponding control females were on water alone. Egg numbers were recorded after 120 h feeding. Three biological replicates of each treatment were done. 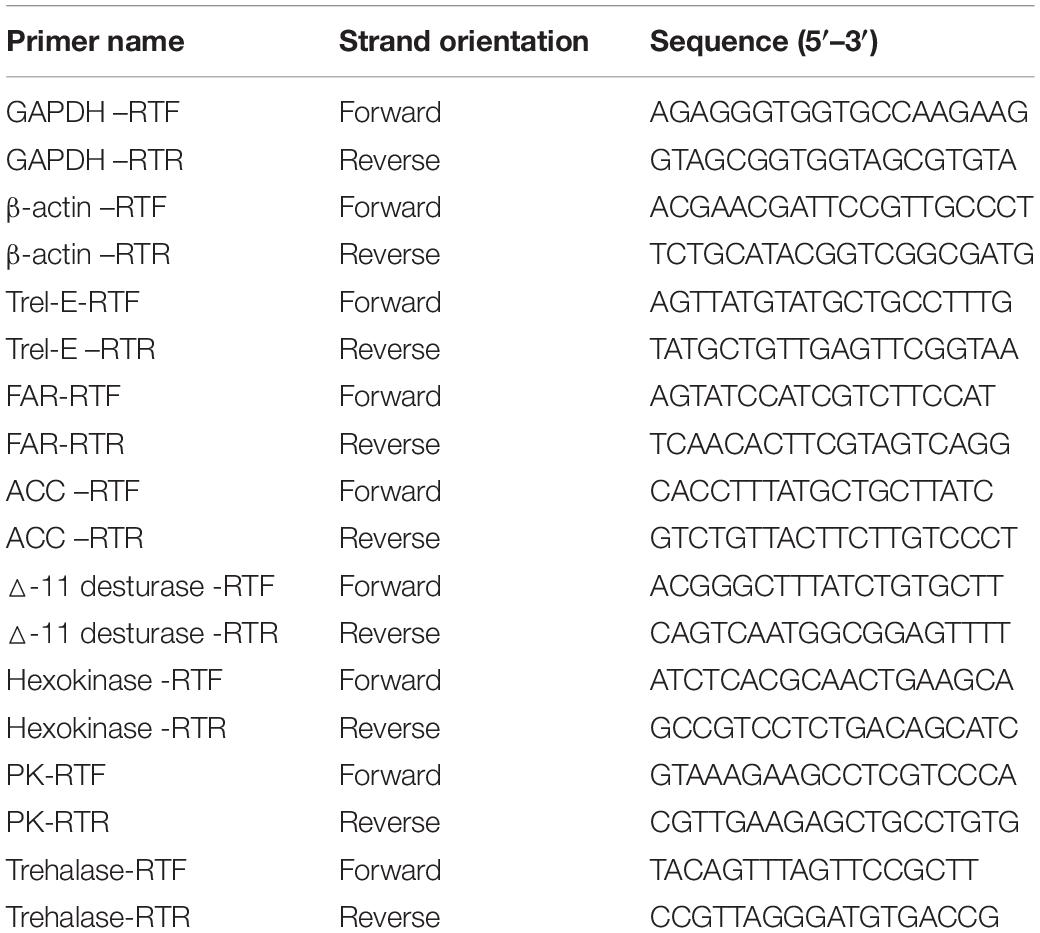 Table 1. Primers used for Real-time PCR in this study.

The Effect of Trehalase Knockdown on Sex Pheromone Biosynthesis and Mating

dsRNA (10 μg) was injected into the intersegment membrane between the 7th and 8th abdominal segments of newly emerged females. 48 h after injection, the PGs were harvested and subject to RT-PCR analysis to test the interference frequency of RNAi. Just as above mentioned, females injected with dsRNA were decapitated to remove endogenous PBAN. 48 h after dsRNA injection, 10 pmol of PBAN was injected into female body. After 1 h waiting time, PGs were collected and dissolved in 100 μL hexane and stored in −80°C followed by GC/MS analysis to measure sex pheromone production. Females injected with 10 μg dsEGFP RNA were used as the controls. Correspondingly, the concernations of trehalose, pyruvate and acetyl-CoA were measured according to above mentioned methods to analysis the effect of trehalose knockdown on the concernations of trehalose, pyruvate and acetyl-CoA.

As the above method, 20 newly emerged females were injected with 15 μg dsRNA (trehalase or EGFP). 72 h after dsRNA injection, Male choosing number were recorded 12 h later. 30 females injected with dsRNA (trehalase or EGFP) were place a new cage with same number of untreated males. After 72 h, the proportion of successful mating was determined according to the presence of spermatophore in the bursa copulatrix (Zhao et al., 2018). Three biological replicates of each treatment were done.

Effect of Sugar Feeding on the Contents of Trehalose, Pyruvic Acid, and Acyl-CoA in PGs 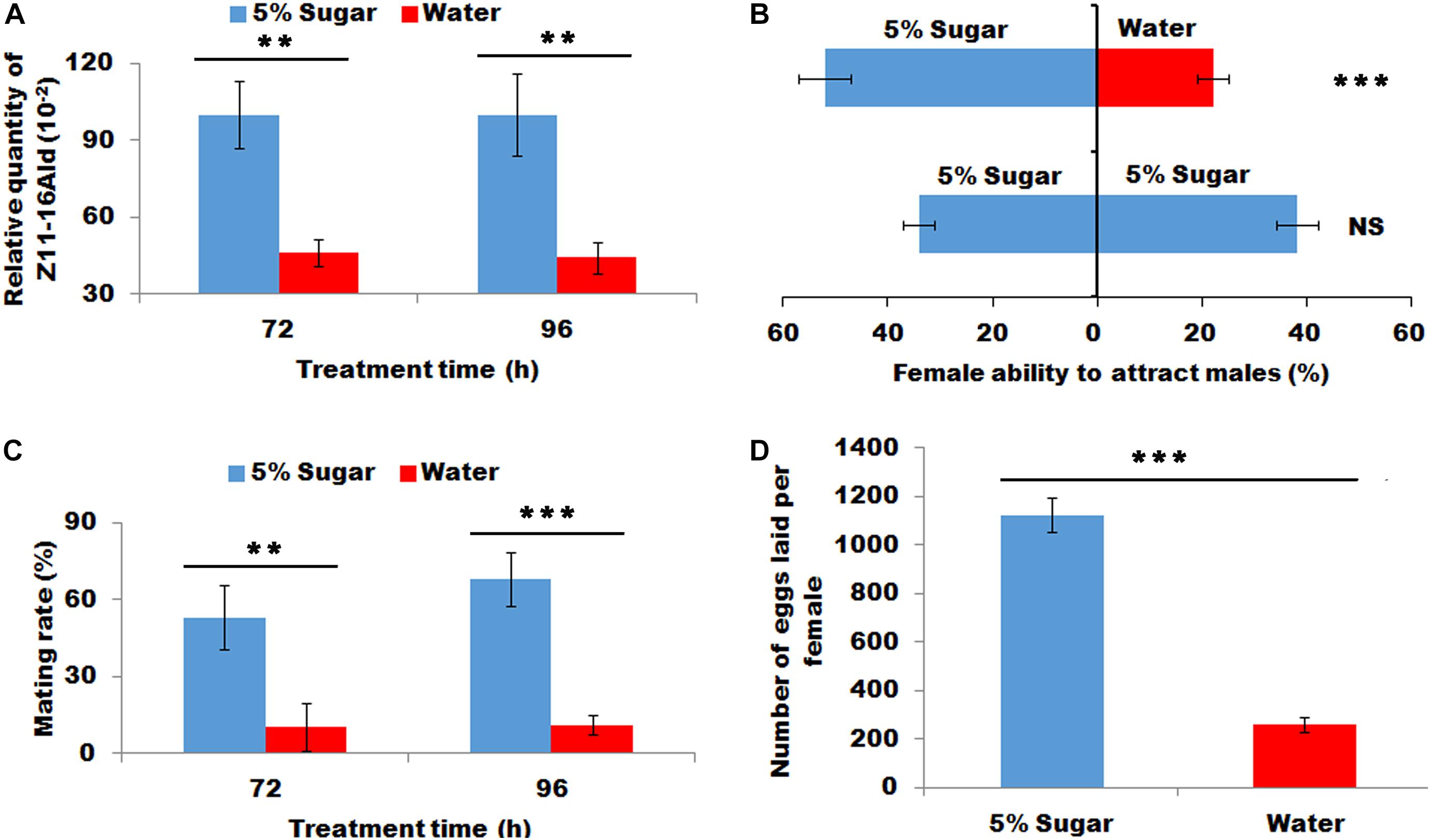 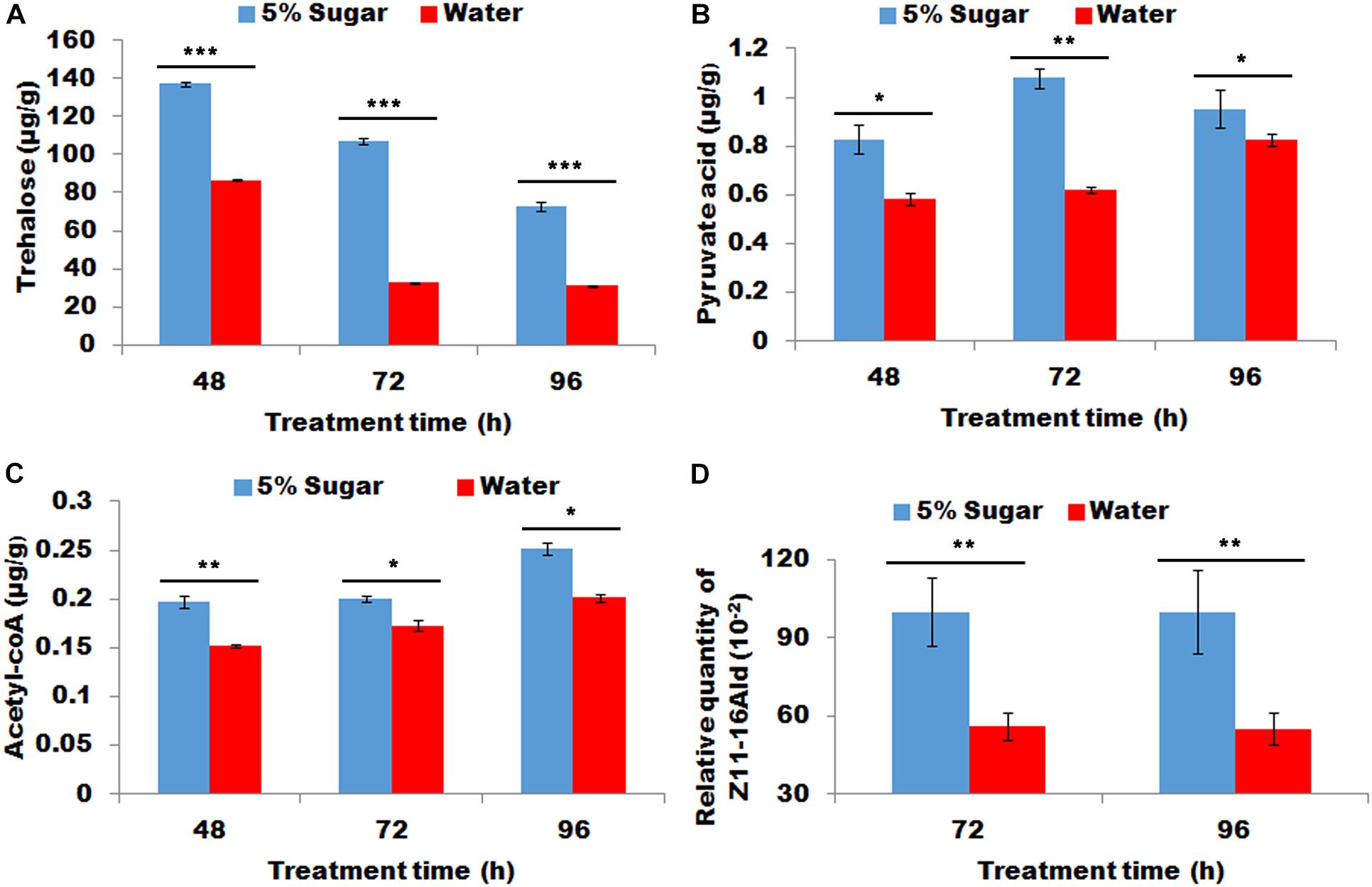 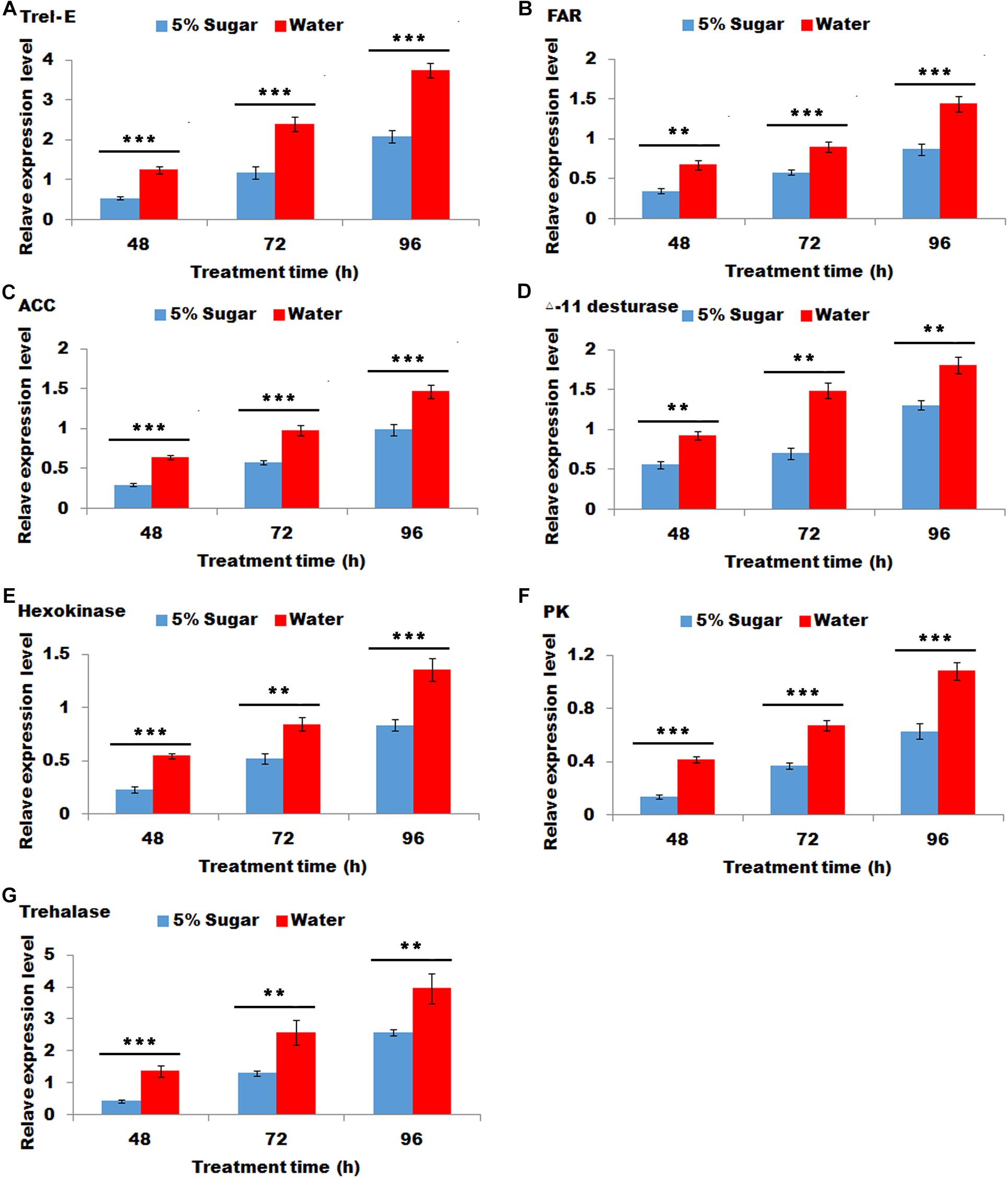 A double-strand RNA of trehalase was injected into newly emerged females. RT-PCR was employed to investigate the interference efficacy at 48 h after injection. The results demonstrated that the injection of trehalase dsRNA led to a significant decrease in the transcript level of trehalase (P < 0.01, Figure 5A). After successful knockdown, the decrease in trehalase transcript caused a significant increase in trehalose in PGs (P < 0.05, Figure 5B). Consistently the RNAi-mediated knockdown of trehalase also resulted in a significant reduction in the contents of pyruvic acid and acytl-CoA (P < 0.05 and P < 0.01, respectively, Figures 5C,D). In addition, the females injected with trehalase dsRNA showed significantly decreased sex pheromone production, female ability to attract males and mating efficacy (P < 0.05, X2 = 9.47, P < 0.001 and P < 0.05, respectively, Figures 5E–G), compared with the control females injected with EGFP dsRNA. 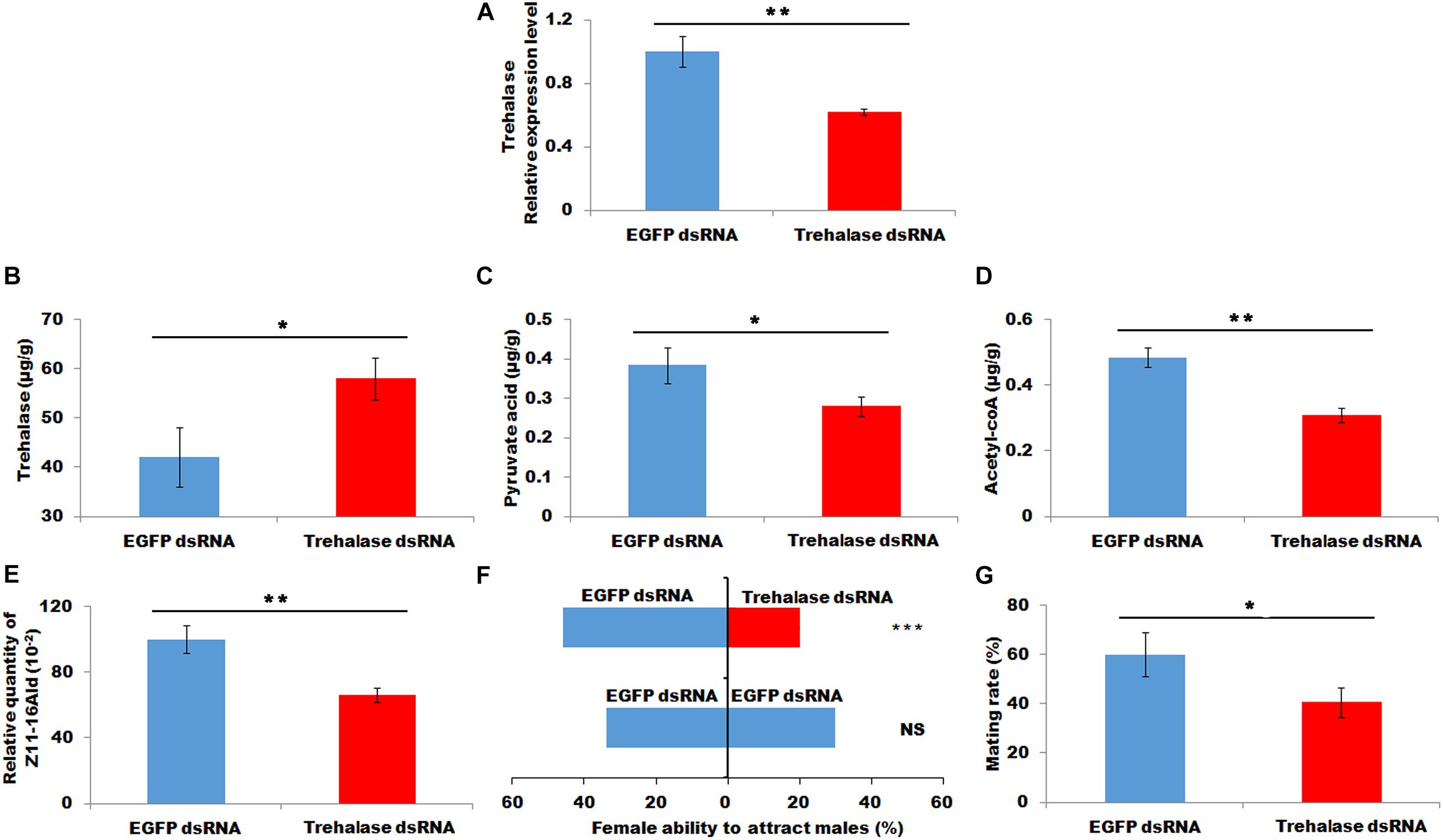 Insect larvae must feed its hosts that provided necessary nutrients to meet the needs of their growth and development (O’Brien et al., 2002). Therefore, feeding in larval stage was considered to be crucial for insect growth and development. As for adults, the food resources for the reproductions of most insects were thought to depend on larval feeding (Bradbury and Vehrencamp, 1998). However, most Lepidopteran species feed nectar that consists of water and sugar in the adult stage. Sugar feeding in the adult stage maximized the capacity of adult reproduction; however, it was generally thought to have a little effect on sex pheromone production (Bradbury and Vehrencamp, 1998). For example, in Heliconius melpomene, the male pheromone composition depends on larval feeding and is not associated with adult diet (Darragh et al., 2019), similarly a number of arctiid moth species produced their pheromones by using materials accumulated from larval feeding (Schulz et al., 1993; Edgar et al., 2007). These studies showed that adult moths seem to not use adult feeding to produce sex pheromone. However, a previous study revealed that the sugar feeding significantly increase sex pheromone production in mated H. virescens (Foster, 2009). A subsequent study also revealed that even in virgin moths of H. virescens, adult feeding significantly increased sex pheromones, indicating that the starved stress in adults (sugar deficiency) led to a significant decrease in sex production on virgin or mated moths (Foster and Johnson, 2010). Most importantly, in H. virescens moths, only a single feeding (glucose) contributed to a maximum of 65% of de novo biosynthesized pheromone production (Foster and Anderson, 2015), indicating that sugar supplement in adult moths played a crucial role in sex pheromone biosynthesis. These results clarified the importance of supplemental sugar in sex pheromone biosynthesis. In the present study, sugar feeding significantly increased sex pheromone production and promoted to more proportion females to mate in M. separata (Figures 1–3). This finding was consistent with the result from H. virescens moths, that was, supplementary sugar played an important role in sex pheromone biosynthesis.

In the present study, sugar feeding promoted the increase in trehalose, pyruvate, and acetyl-CoA production in M. separata (Figures 1, 3); and contributed to the increase in sex pheromone biosynthesis and the subsequent mating proportion of female moth (Figures 2, 3). Trehalase was chosen as a readout of sugar metabolism to further investigate the effect of sugar supplement on sex pheromone biosynthesis. Trehalase is a key enzyme that catalyzes the hydrolysis of trehalose into two glucose molecules (Becker et al., 1996). Trehalase knockdown means although trehalose is sufficient, it does not normally transform to glucose (Figure 5B). In other word, as adults continued to feed, the females were still in the state of starvation. The results of the present study were well agreement with the previous prediction. RNAi-mediated knockdown of trehalase led to a significant accumulation of trehalose in the PGs (Figure 5B), and a significant decrease in pyruvate, acetyl-CoA concentration and sex pheromone production in PGs (Figures 5C–E), finally led to a decrease in the female ability to attract males and female mating frequency (Figures 5F,G). The results showed that M. separata adult adopted same strategies with those of H. virescens to produce sex pheromone (Foster, 2009; Foster and Johnson, 2010). Thus, adult feeding (sugar) contributed to the biosynthesis of pyruvate and acetyl-CoA from trehalose, and increased the sex pheromone biosynthesis and subsequent mating frequency.

In our study, the mating of M. separate can be significantly affected by feeding sugar. As an important migratory agricultural pest, M. separata must obtain supplemental sugar to reach target habitats and lay eggs (Guo et al., 2018). Therefore, reasonable planting and layout of nectar sources along the migratory pathway may help to cut the sugar supply, and finally leading to failure in mating and reproduction of M. separate.

Copyright © 2020 Zhang, Zhang, Yao, Wang, Wei, Du, An and Yin. This is an open-access article distributed under the terms of the Creative Commons Attribution License (CC BY). The use, distribution or reproduction in other forums is permitted, provided the original author(s) and the copyright owner(s) are credited and that the original publication in this journal is cited, in accordance with accepted academic practice. No use, distribution or reproduction is permitted which does not comply with these terms.

The Physiological Regulation of Energy Metabolism in Insects