Considering that baroreflex activation has anti-inflammatory properties, it is reasonable to expect that the Bezold-Jarisch reflex would also have a similar ability since both reflexes share the same central pathway and analogous efferent autonomic response. Therefore, this study aimed to evaluate if the activation of the Bezold-Jarisch reflex can modulate the systemic inflammatory response in unanesthetized endotoxemic rats.

Male Wistar Hannover rats (250–300g) from the Main Animal Facility of the University of São Paulo (Campus of Ribeirão Preto; Ribeirão Preto, SP, Brazil) were used to perform the study. The animals were kept under a constant light-dark cycle (12h) and controlled temperature (23°C) with free access to water and food. The experimental protocol of the present study was evaluated and approved by the Committee of Ethics in Animal Research from the Ribeirão Preto Medical School – University of São Paulo (protocol #161/2016).

A cocktail of ketamine and xylazine (50mg/kg and 10mg/kg, i.p.) was used to anesthetize the animals to perform the surgical procedures of catheterization. The left femoral artery and vein were catheterized with polyethylene tubing (PE-50 soldered to a PE-10 polyethylene tube; Intramedic, Clay Adams, Parsippany, NJ, United States) for arterial pressure recording and PBG or saline (vehicle) administration, respectively. Furthermore, a catheter (PE-50 polyethylene tube; Intramedic, Clay Adams, Parsippany, NJ, United States) was inserted into the abdominal cavity for the administration of (lipopolysaccharide) LPS from Escherichia coli 0111:B4 (Sigma-Aldrich, St. Louis, MO, United States) or saline (vehicle). The catheters were pulled up through a subcutaneous track to the animal’s neck and exteriorized at the nape, and surgical incisions were sutured. Analgesic (tramadol hydrochloride: 2mg/kg, s.c.) was administered to avoid pain.

Forty-eight hours after the surgical procedures, the rats were assigned into four groups:

With the animal unanesthetized, the arterial catheter was connected to a polyethylene tube, filled with saline solution, hanging loosely over the cage. This extension was connected to the pressure transducer attached to the recording system. The venous and peritoneal catheters were connected to other polyethylene tubes in order to allow for drug administration. Although the animals were still connected to extensor tubes, the length of extensions allowed the animals to move freely throughout the recording period. Thus, the experiment was conducted with the animals moving freely in their cages, but carefully supervised by the investigator. Silence was maintained in the room to minimize environmental stress. The experimental protocol consisted of 30min of basal recordings of pulsatile arterial pressure, followed by the administration of PBG (5μg/kg, i.v.; Bezerra et al., 2011) – to promote the activation of the Bezold-Jarisch reflex – or saline (as control). Five minutes later, the LPS (5mg/kg, i.p.; Brognara et al., 2018) was administered – to induce systemic inflammation – or saline (as control) was injected. The arterial pressure was recorded until completing 90min after LPS or saline injection. Next, the arterial pressure recording was suspended, and a blood sample was collected through the catheter from the femoral artery with heparin. Then, the rats were killed by decapitation for quick collection of samples from the spleen, the heart, and the whole hypothalamus, which were immediately frozen in liquid nitrogen. Blood samples were kept on ice until centrifugation at 3500rpm for 15min at 4°C. The plasma was then collected, and all biological material was stored at −80°C.

On the day of the assay, the tissue samples were homogenized in 0.5ml of PBS using a homogenizer (Polytron-PT-3100, Evisa, Kinematica, Luzern, Switzerland) and then centrifuged at 1000rpm for 10min at 4°C. The plasma and tissue supernatant samples were used to measure the cytokine [tumor necrosis factor-alpha (TNF-α), interleukin (IL)-6, IL-1β, and IL-10] levels by the immunoenzymatic method (ELISA) using Duo set kits from R&D Systems (Minneapolis, MN, United States) according to the manufacturer’s instructions.

The analysis of the hemodynamic data was carried out using two-way ANOVA for repeated measures, followed by the Tukey post-hoc test. The analysis of inflammatory mediators was carried out using one-way ANOVA, followed by the same post-hoc test. Differences were considered statistically significant if p<0.05. Statistical analysis was performed using the SigmaPlot 12.0 software (Systat Software, San Jose, CA, United States), and the results are presented as mean ± standard error of the mean.

Comparing all the groups at each moment, no changes in arterial pressure were observed over time at any time evaluated (all p>0.05; Figures 2A,B). That is to say, the injection of LPS or PBG did not promote alterations in arterial pressure over 90min. Nevertheless, comparing all the moments within the same group, there is an increase in arterial pressure in the PBG+LPS group at 90min compared to 30min (108±4 vs. 118±4mmHg; p=0.008; Figure 2B). Saline or PBG administration did not change the heart rate over time (Figure 2C). However, all groups that received LPS had an increase in the heart rate starting 60min after LPS injection which was maintained until the end of the protocol at 90min (Figure 2D). In addition, PBG administration did not prevent the tachycardia induced by LPS over time (Figure 2D).

Figure 2. Time course of hemodynamic response to phenylbiguanide and LPS. Mean arterial pressure [MAP (A) and (B)] and heart rate [HR (C) and (D)] at baseline (time zero), 30, 60, and 90min after the administration of LPS or saline from the different groups. LPS, lipopolysaccharide; PBG, phenylbiguanide; and Sal, saline. *p<0.05 vs. 0min; #p<0.05 vs. 30min. Two-way ANOVA for repeated measures with Tukey’s post-hoc test.

The administration of saline associated, or not, with PBG did not modify the plasma cytokine levels (Figures 3A–D). Instead, the administration of LPS increased all the cytokines evaluated in plasma 90min after its injection (all p<0.05; Figures 3A–D). The activation of the Bezold-Jarisch reflex decreased, by more than 60%, the release of TNF-α in plasma 90min after LPS compared to Sal + LPS (Sal + LPS: 775±209 vs. PBG + LPS: 248±30pg/ml; p=0.044; Figure 3A). However, it did not prevent the increase of the other cytokines induced by LPS (Figures 3B–D). The analysis of tissue cytokines showed that LPS administration augmented most of the cytokines analyzed in the spleen (Figures 3E–H), heart (Figures 3I–L), and hypothalamus (Figures 3N–P). In the spleen, the activation of the Bezold-Jarisch reflex reduced the IL-6 release induced by LPS (Sal + LPS: 39±6 vs. PBG + LPS: 24±4pg/mg of tissue; p=0.037; Figure 3F) but did not decrease the levels of the other cytokines induced by LPS (Figures 3E,G,H). In the heart and hypothalamus, the administration of PBG, associated with LPS, did not reduce the release of any cytokine evaluated in the present study (Figures 3I–P). Undetected levels of TNF-α were observed in the hypothalamus (Figure 3M). 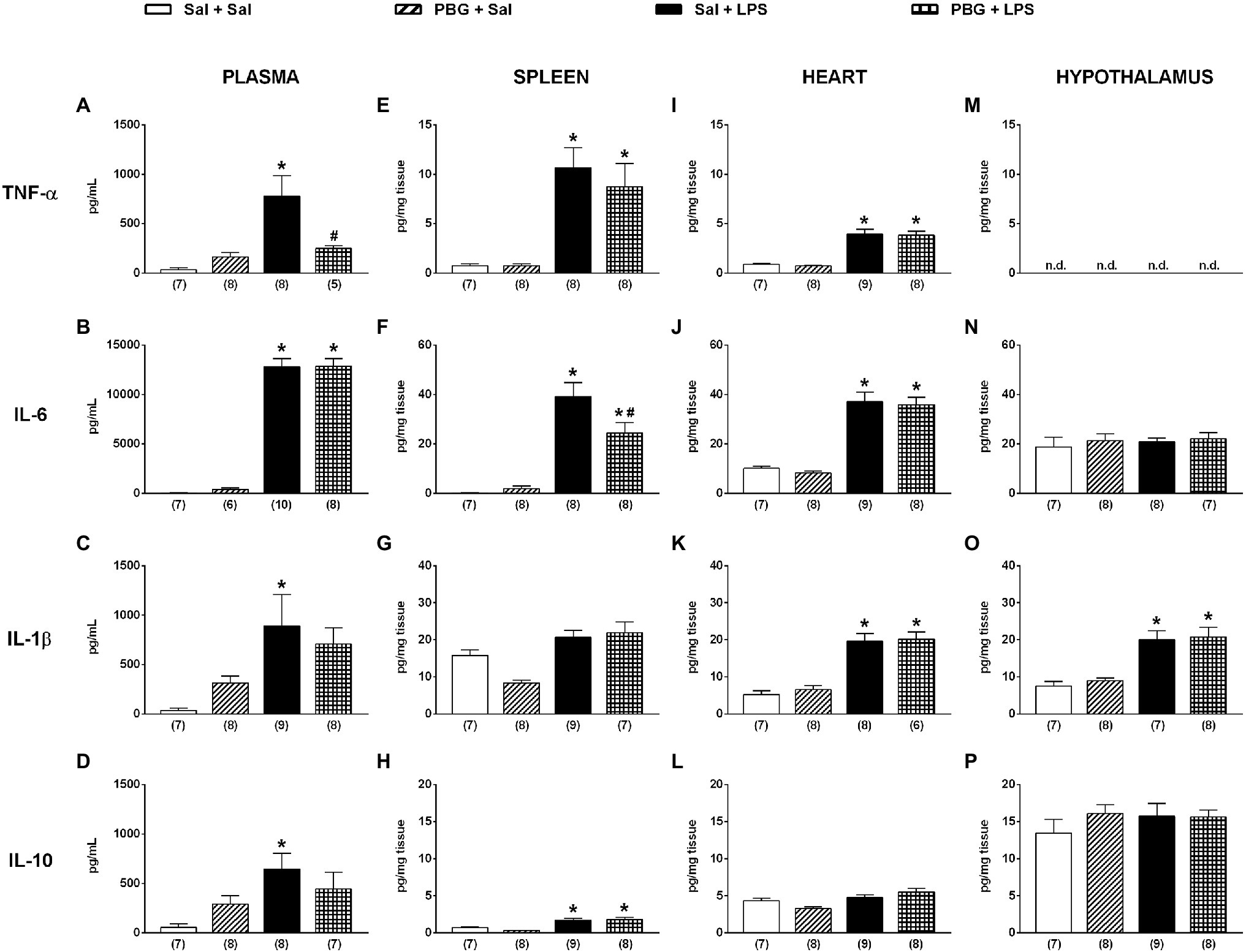 It is noteworthy that the study by Brognara et al. (2018) was also conducted on unanesthetized rats which were subjected to the induction of systemic inflammation through the administration of LPS, as in the present study. However, an essential factor may justify the differences observed in the anti-inflammatory effects promoted by each reflex: The method chosen to activate the parasympathetic and inhibit the sympathetic nervous system. In the experiments from Brognara et al. (2018), the baroreflex was activated through electrical stimulation of the aortic depressor nerve; in other words, a neurostimulation approach was used. In the current study, a pharmacological method was chosen to trigger the Bezold-Jarisch reflex. Thus, although the efferent autonomic response was practically the same for both reflexes, resulting in parasympathetic activation and concomitant sympathetic inhibition, the different afferent approaches used to activate these reflexes appeared to interfere with the effector inflammatory response.

Of note, the influence of the Bezold-Jarisch reflex on the other cytokines in plasma (IL-6, IL-1β, and IL-10) and the spleen (TNF-α, IL-1β, and IL-10) may have a different time course, occurring later, or even earlier. That is to say, the anti-inflammatory effect produced by the parasympathetic activation and sympathetic inhibition due to the activation of the Bezold-Jarisch reflex would require more, or less, than 90min after LPS to be effective. In that regard, the literature has suggested that the anti-inflammatory effects promoted by vagus nerve stimulation are related to how long after vagal activation the injury is induced, suggesting that this anti-inflammatory pathway needs a complex neuroimmune interaction that may not occur immediately (Inoue et al., 2016). Therefore, we comprehend that the data presented here are preliminary and need further studies to deeply understand the role of the Bezold-Jarisch reflex in controlling inflammation. The conceivable studies would involve the evaluation of the cytokine levels in plasma and tissues at different times during the development of the systemic inflammatory response in unanesthetized rats; a longer period for the activation of the Bezold-Jarisch reflex before inducing the systemic inflammation; tests of different doses of LPS and PBG; and also subdiaphragmatic vagotomy to exclude a non-neuronal effect.

In conclusion, this is the first study confirming that the activation of the Bezold-Jarisch reflex induced by PBG administration possesses specific anti-inflammatory effects in rats. In other words, PBG administration to unanesthetized endotoxemic rats elicits the activation of the Bezold-Jarisch reflex and can modulate the release of TNF-α in plasma and IL-6 in the spleen. This novel mechanism of neuromodulation will undoubtedly present new noteworthy questions concerning the investigation of the neural control of inflammation. Further studies should be conducted under different inflammatory conditions to deeply understand the role of cardiovascular reflexes in the inflammatory response, including the mechanisms involved in the activation of the Bezold-Jarisch reflex and the reduction in production and release of cytokines.

The animal study was reviewed and approved by the Committee of Ethics in Animal Research from the Ribeirão Preto Medical School – University of São Paulo (protocol # 161/2016).

FB and HS: conception or design of the work. FB, JC, AR, and NS-J: acquisition or analysis or interpretation of data for the work. FB, JC, AR, NS-J, and HS: drafting the work or revising it critically for important intellectual content. All authors approved the final version of the manuscript and agreed to be accountable for all aspects of the work in ensuring that questions related to the accuracy or integrity of any part of the work are appropriately investigated and resolved.

The São Paulo Research Foundation (FAPESP), the Coordination for the Improvement of Higher Education Personnel (CAPES), the Foundation for the Support of Teaching, Research and Service (FAEPA), and the University of São Paulo (USP) are gratefully acknowledged.

Copyright © 2021 Brognara, Castania, Ribeiro, Santos-Júnior and Salgado. This is an open-access article distributed under the terms of the Creative Commons Attribution License (CC BY). The use, distribution or reproduction in other forums is permitted, provided the original author(s) and the copyright owner(s) are credited and that the original publication in this journal is cited, in accordance with accepted academic practice. No use, distribution or reproduction is permitted which does not comply with these terms.