Sirtuin 6 Protects Against Oxidative Stress and Vascular Dysfunction in Mice

Objective: Sirtuin deacetylases are major regulators of organismal aging, and while depletion of sirtuin 6 (SIRT6) in mice results in a profound progeroid phenotype, the role of SIRT6 in the regulation of vasomotor function is unknown. Thus, our objective was to test the hypothesis that reductions in SIRT6 elicit endothelial dysfunction in young, genetically altered mice.

Results and Approach: We used young (3 month old), littermate-matched, SIRT6 wild-type (WT), and SIRT6 heterozygous (HET) mice. SIRT6 expression (qRT-PCR) was reduced by 50% in HET mice. Carotid vessel responses to acetylcholine, sodium nitroprusside, U46619, and serotonin were examined in isolated organ chamber baths. Relaxation in response to acetylcholine (ACH) was impaired in HET mice compared to littermate-matched WT controls (67 ± 3% versus 76 ± 3%, respectively; p < 0.05), while responses to sodium nitroprusside were unchanged. Short-term incubation of carotid rings with the NAD(P)H oxidase inhibitor, apocynin, significantly improved in vessels from HET mice but not their WT littermates. Peak tension generated in response to either U46619 or serotonin was significantly blunted in HET mice compared to their WT littermates.

Conclusion: These data suggest that SIRT6 is a key regulator of vasomotor function in conduit vessels. More specifically, we propose that SIRT6 serves as a tonic suppressor of NAD(P)H oxidase expression and activation, as inhibition of NAD(P)H oxidase improved endothelial function in SIRT6 haploinsufficient mice. Collectively, SIRT6 activation and/or histone acetyltransferase inhibition may be useful therapeutic approaches to reduce endothelial dysfunction and combat age-associated cardiovascular disease.

A growing body of data suggests that the sirtuin deacetylases (SIRTs) play a major role in protecting against a number of age-related diseases (Herskovits and Guarente, 2013; Hubbard and Sinclair, 2014; Matsushima and Sadoshima, 2015; Chen et al., 2020). With regards to the vasculature, previous reports suggest that reduction of SIRT1 leads to increases in histone acetylation, increases in inflammation, and endothelial dysfunction due in part to nitric oxide synthase hyperacetylation and its subsequent inactivation (Kitada et al., 2016; Zhang et al., 2017). The effects of reducing other SIRT isoforms in the regulation of histone acetylation and vascular function, however, remain poorly understood.

Thus, our working hypothesis in the current study was that reductions in SIRT6 are an independent contributor to increases in histone acetylation and oxidative stress in blood vessels, which could place SIRT6 at the forefront of contributors to age-associated cardiovascular disease. Our specific aims were to determine: (1) whether SIRT6 regulates histone acetylation in arteries, and (2) whether endothelial dysfunction in SIRT6-deficient mice is mediated by increases in NAD(P)H oxidase-derived reactive oxygen species.

For these studies, we studied mice at 3 months of age (i.e., a relatively young age). For establishment of an in-house colony, mice that were heterozygous for SIRT6 (SIRT6+/–) mice were acquired from Jackson Laboratories (stock number: 006050) along with background strain-matched wild-type mice (SIRT6+/+), with SIRT6 being inactivated with a targeting vector containing lacZ and neomycin resistance genes disrupting exons 1–6. SIRT6+/– mice were then bred with SIRT6+/+ to generate all experimental mice used for this study, additionally littermate-matched pairs were used whenever possible. Mice had free access to water and regular chow diet, and maintained on a 12-h light, dark cycle. All experimental protocols were approved by the Mayo Clinic Institutional Animal Care and Use Committee (IACUC) and conformed to guidelines set forth by the National Institutes of Health and the Guide for the Care and Use of Laboratory Animals. Animals were euthanized using intraperitoneal injection of pentobarbital sodium (>100 mg/kg).

Both right and left carotid arteries were carefully removed and cleaned of adventitia, then each carotid was cut into two segments, and threaded onto two stainless steel hooks. In brief, hooks were then suspended in an isolated organ bath chamber which contained warm-oxygenated (95%O2, 5%CO2) Krebs solution. Vessels were equilibrated to a baseline tension of 0.25 grams. Once stabilized, responses to acetylcholine (to assess endothelium-dependent relaxation), sodium nitroprusside (to assess endothelium-independent relaxation and sensitivity to nitric oxide donors), U46619 (a thromboxane receptor agonist to allow assessment of vascular smooth muscle cell contractile function), and serotonin (to assess vascular smooth muscle cell contractile function) were evaluated in all mice, as described previously (Roos et al., 2013). Additionally, responses to acetylcholine were also assessed in the presence of apocynin (100 μM), an inhibitor of NADPH oxidase, or incubated with L-NAME (100 μM), a nitric oxide synthase inhibitor.

Levels of ROS in descending thoracic aorta were measured using lucigenin-enhanced chemiluminescence, as described previously (Miller et al., 2008). In brief, excess adventitial tissue and perivascular fat were removed, and cut into four sections of ∼4 mm in length. Cuvettes containing warm Leibovitz’s L15 medium (a CO2– independent medium) and 5 μM lucigenin (N, N′-Dimethyl-9, 9′-biacridinium dinitrate, Sigma) were placed in a FB12 luminometer (Berthold) and chemiluminescence was measured for 10 min to obtain baseline measurement. Once baseline measurement was taken, the cleaned 4-sections of aorta was carefully added to the cuvette and replace back into luminometer to detect ROS levels of the vessel. Upon measurement completion of vessel alone, 100μM of apocynin was added to the vessel to observe changes in ROS due to NADPH oxidase inhibition. 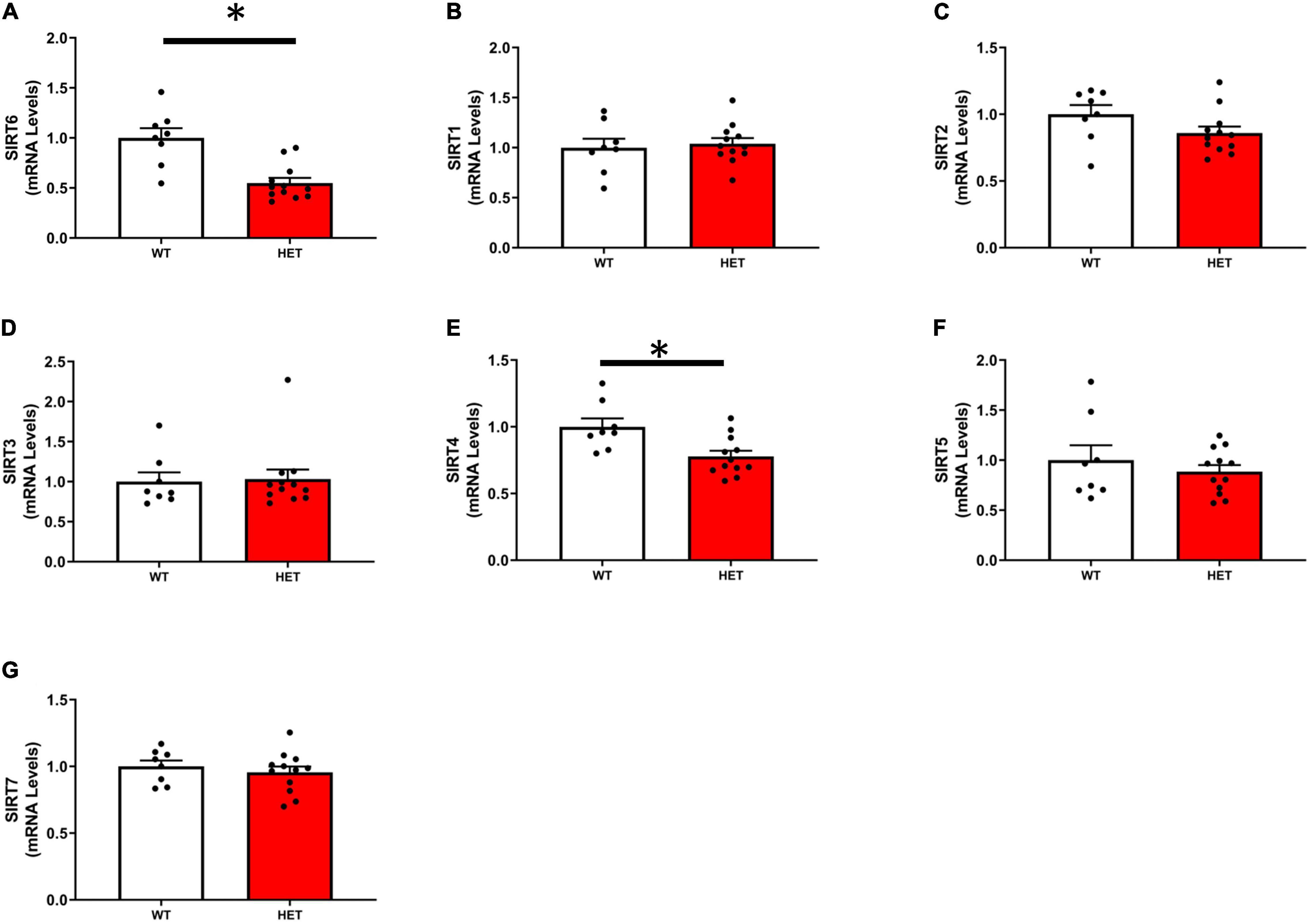 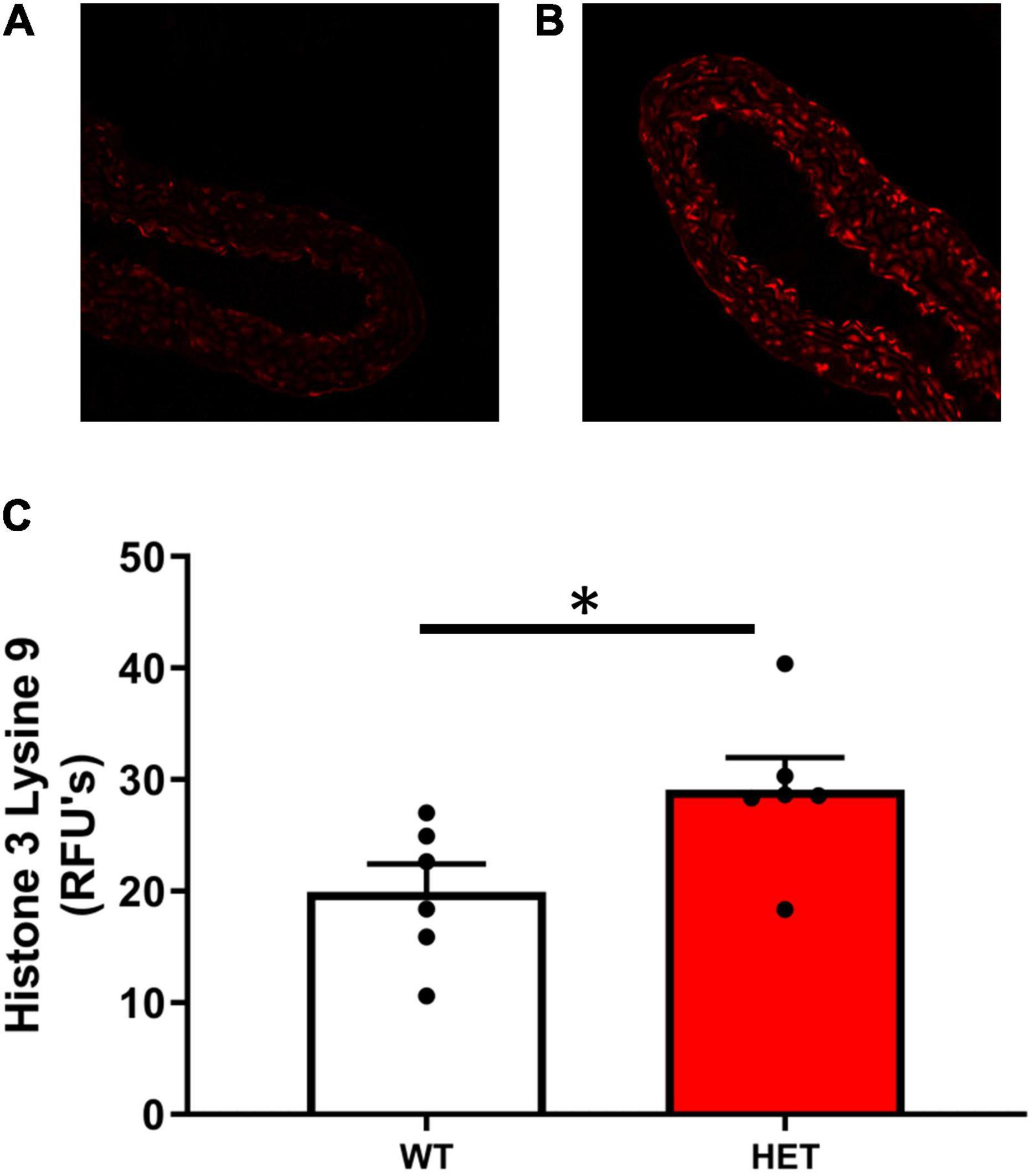 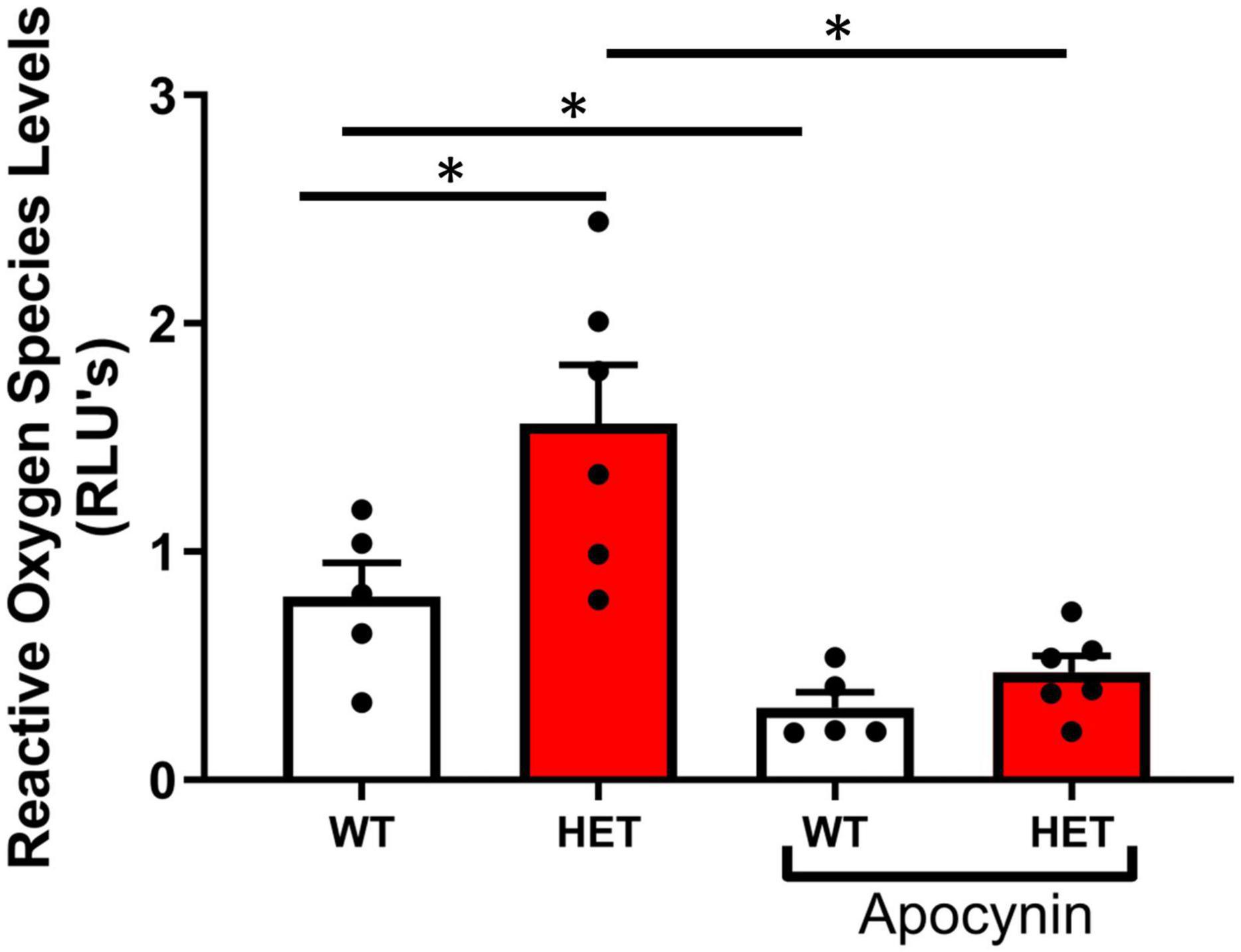 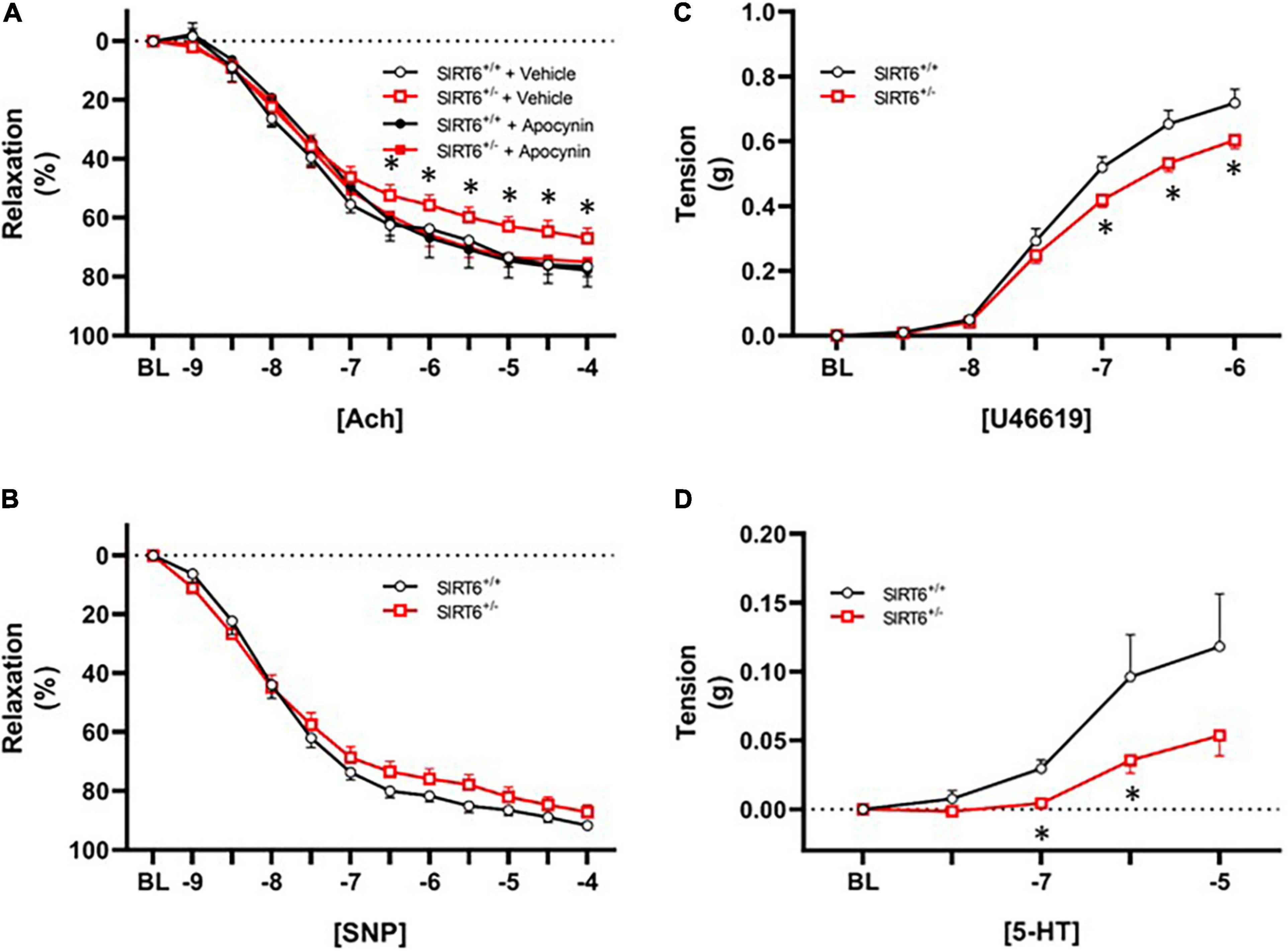 In the present study, we used genetically altered mice to reduce SIRT6 expression by ∼50%, and found that inactivation of one copy of SIRT6 resulted in histone hyperacetylation at H3K9. While previous studies demonstrated that H3K9 and H3K56 are SIRT6 targets in several tissues and cell types in vivo and in vitro (Mostoslavsky et al., 2006; Kawahara et al., 2009; Michishita et al., 2009), to our knowledge, this is the first study to demonstrate that SIRT6 is expressed at physiologically relevant levels and targets these sites in vascular tissue.

Our goal was to reduce SIRT6 without affecting expression of other SIRT isoforms. The observation that SIRT1 expression was unchanged was particularly important given previous reports that SIRT1 is an important determinant of protein/histone acetylation (Donmez and Guarente, 2010), eNOS activity (Mattagajasingh et al., 2007), NFκB signaling (Yeung et al., 2004; Salminen et al., 2008), and gross vascular pathology in aorta (Donato et al., 2011). Despite overlap between SIRT1 and SIRT6 nuclear targets (e.g., H3K56), the data from the current study and others (Mostoslavsky et al., 2006; Salminen et al., 2008; Michishita et al., 2009; Yang et al., 2009) would suggest that there is not a functional or sufficient compensatory increase in overall sirtuin activity when levels of one isoform are reduced.

We did, however, observe reductions in SIRT2 and SIRT4 in aorta from SIRT6-deficient mice. There are three lines of evidence suggesting that these changes are unlikely to explain the functional and molecular changes we observed with reduction of SIRT6. First, changes in expression of SIRT2 and SIRT4, while statistically significant, are relatively small. Second, SIRT2 has been shown to play a deleterious role in the induction of many pathophysiological processes (Narayan et al., 2012). Thus, we would anticipate that reductions in SIRT2 would be protective, and would only serve to mask the true physiological impact of reducing SIRT6. Third, SIRT4 is localized predominantly in mitochondria (Sack and Finkel, 2012), and thus cannot explain the increases in nuclear histone acetylation we observed in the present study.

Our data demonstrate that reduction of SIRT6 significantly increases superoxide levels in aorta. While a net change in superoxide levels is a balance between production and dismutation of superoxide (Csiszar et al., 2007; Alom-Ruiz et al., 2008), endothelial dysfunction in contexts such as hypertension, atherosclerosis, and aging is often due to increases in NAD(P)H oxidase activity (Dworakowski et al., 2006, 2008b; Heistad et al., 2009). Mechanistically, increases in superoxide and/or hydrogen peroxide limit endothelium-dependent vasodilation through conversion of nitric oxide to peroxynitrite, which does not elicit vasodilation and can nitrosylate and inactivate other antioxidant proteins (Miller et al., 2008, 2010). Furthermore, increases in reactive oxygen species can oxidize soluble guanylate cyclase, a major downstream effector involved in NO-dependent vasodilation (Bachschmid et al., 2005; Schildknecht and Ullrich, 2009).

Our final key finding in the current report is that endothelial function in SIRT6+/– mice was normalized by acute incubation of vessels with apocynin, which reduces NAD(P)H oxidase activity through inhibiting assembly of the NADPH oxidase complex (Stolk et al., 1994). Our data showing identical vasomotor responses to acetylcholine in vessels pre-treated with the nitric oxide synthase inhibitor L-NAME suggests that other endothelium-dependent vasodilatory mechanisms are largely unchanged by SIRT6 deficiency, and suggest the changes observed herein are largely due to reductions in nitric oxide bioavailability and signaling (Feletou and Vanhoutte, 2006). Previous studies suggested that SIRT1 tonically suppresses expression of NAD(P)H oxidase subunits, and while this has clear implications for influencing oxidative state and nitric oxide signaling, mechanisms whereby this occurs have not been clearly elucidated. One plausible link between SIRT1/6 activity and NAD(P)H oxidase expression is through modulation of NF-κB signaling (Yeung et al., 2004; Salminen et al., 2008; Li et al., 2009; Edderkaoui et al., 2011; Ungvari et al., 2011), which is tonically suppressed through the maintenance of low histone acetylation levels by SIRT1 and SIRT6 (Michishita et al., 2008; Salminen et al., 2008; Kawahara et al., 2009).

As this is a highly focused brief report, there are several limitations to this work. First, while we have identified activation of NADPH oxidase as a potential mechanism contributing to endothelial dysfunction in this model, we did not identify the specific mechanistic steps whereby SIRT6 induces this phenomenon. This is largely due to the potential for a vast number of molecular changes that can be induced with inactivation of one copy of SIRT6 and subsequent histone hyperactetylation and genomic instability. Furthermore, we only studied haploinsufficient mice herein, as knockout of SIRT6 in our experience results in dramatic blunting of animal growth and high mortality, and removal of aorta from such mice was not successful without significant damaging of the vessel. Nevertheless, prior work suggests that induction of premature senescence is a consequence of SIRT6 inactivation in vitro (Lee et al., 2020), which can subsequently increase Nox2 activity (Huang et al., 2017) (a phenomenon demonstrated in kidney). Ultimately, we feel these are exciting new directions for investigation in the field moving forward.

In summary, this is the first study to demonstrate that global-genetic reductions of SIRT6 are a major determinant of histone acetylation and oxidative stress in the vasculature, and that deficiency of SIRT6 results in significant endothelial dysfunction due to increases in NAD(P)H oxidase-derived reactive oxygen species. Given the large amount of literature implicating endothelial dysfunction in disease contexts ranging from aging to atherosclerosis to hypertension, our data suggest that activators of SIRT6 could represent a novel class of therapeutic compounds with broad clinical utility.

The animal study was reviewed and approved by Mayo Clinic Institutional Animal Care and Use Committee.

Copyright © 2021 Greiten, Zhang, Roos, Hagler, Jahns and Miller. This is an open-access article distributed under the terms of the Creative Commons Attribution License (CC BY). The use, distribution or reproduction in other forums is permitted, provided the original author(s) and the copyright owner(s) are credited and that the original publication in this journal is cited, in accordance with accepted academic practice. No use, distribution or reproduction is permitted which does not comply with these terms.

Sirtuins from Bench to Bedside: How Far Are We?