Purpose: This study aimed to assess the requirement of protein in pre-exercise carbohydrate drinks for optimal endurance performance at high intensity and post-exercise fatigue recovery.

Seven physically active men (age 20.0 ± 0.9 years; height 167.7 ± 4.4 cm; body mass 56.4 ± 4.8 kg; and 2peak 49.3 ± 0.3 L/min) with exercise habit > three times per week were recruited for this study. The participants signed informed consent after a verbal and written briefing on the procedures of this study including possible risks and discomforts involved. Then, they were completed a Physical Activity Readiness Questionnaire (PAR-Q) form prior to this study. Exclusion criteria are vegetarian, smokers, on a weight-reducing diet, consuming medication, or drugs, diagnosed with neurological, metabolic, and/or cardiovascular diseases, having an injury, and presenting high risk for performing maximal intensity exercises. University of Malaya Research Ethics Committee approved this study. The sample size was calculated using G-Power version 3.1.9.2 (Informer Technologies, Inc. United States) on a study by Romano-Ely et al. (2006). The G-Power indicated that a minimum sample of seven produced 95% CI with an effect size of f = 1.10, α = 0.05, and β = 0.80. 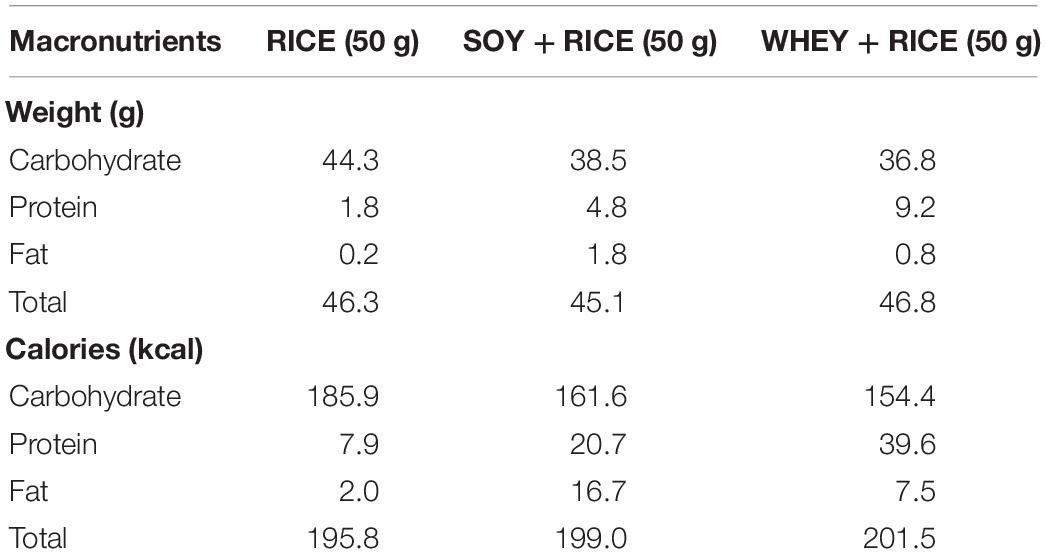 The experimental design to assess the ergogenic effect of pre-exercise supplements (195–200 kcal) on high-intensity endurance performance (cycling time to exhaustion at 85% 2peak and total work exerted) and recovery against the same exercise challenge is shown in Figure 1. Participants were randomized into one of the three beverage supplemented conditions in a counterbalanced order. The participants were fasted for 12 h before consuming 500 ml (1) rice mixed with soybean (SOY + RICE), (2) rice mixed with whey protein (WHEY + RICE), or (3) rice alone (RICE) as the control condition 2 h before the endurance performance test on a cycle ergometer (Day 1). Participants repeated the same experimental protocol with the same beverage on the next day (Day 2) to determine recovery efficacy. The three supplemented conditions were separated by a 1-week washout period. They were informed to refrain from taking any soy-based or whey protein-related supplements 2 days before the first trial and between Day 1 and Day 2 until the completion of all supplemented conditions. The participants were asked to limit themselves to activities of daily living and slow walking or cycling for personal transport 2 days before the trials and between Day 1 and Day 2 for each trial. All cycling trials with different supplements were performed under consistent experimental procedures under the same environmental conditions. A physician was on duty to monitor the safety of challenged participants during all the trials.

The participants were required to visit the laboratory on eight occasions. Each visit comprised of familiarization, sub-maximum cycling, and 2max test, and three back-to-back cycling to exhaustion at 85% 2max sessions with a 1-week period gap between them in a counter-balanced order. For the 2max test, after a 30-min rest from the sub-maximum cycling test, the participant pedaled at 75 W for 1 min with 25 W increment every 1 min until volatile exhaustion. The 2max was determined when the participant met at least two out of the following three criteria: (1) respiratory exchange ratio (RER) above 1.1, (2) VO2 reached a plateau, and (3) 95% predicted maximum heart rate (HRmax). The maximum value of oxygen consumption was recorded as 2peak if no plateau is observed. The aerobic power at 85% 2peak of each participant was obtained using a regression formula between pedaling power and % 2peak.

Participants arrived at the laboratory after a 12-h overnight fast, at approximately 8–9 h (Day 1). They were weighed using bioelectrical impedance analysis (InBody, United States) and a cannula (G-15, Venflon) was inserted in an antecubital vein by a phlebotomist. After a 10-min rest and blood collection, participants consumed one of the isocaloric RICE, SOY + RICE, or WHEY + RICE beverages. The participants were asked to stay within the testing area and remained sedentary (i.e., sitting, reading, and studying) for 2 h before a brief warm-up for 5 min. Then, participants were cycled on a Monark 839 E ergometer (Vansbro, Sweden) at a workload equivalent to 85% 2peak until volitional exhaustion. Heart rate was monitored throughout the test using Polar FT4M (Polar Electro, Finland). Exhaustion is defined as the point at which participants can no longer maintain the cycling load. At this point, the rate of perceived exertion (RPE) was recorded using the Borg scale (Borg, 1982). The workload was recorded in kilopond per minute, and the total duration spent was used to calculate the total work done (kilopond). Blood samples were taken immediately (0 min) and 1 h post-exercise. To assess the magnitude of recovery against the exercise challenge from Day 1, the same protocol was repeated 24 h later (Day 2).

All values are expressed as a difference from baseline (mean ± SE). A one-way ANOVA with repeated measures was used for comparisons between three time points for endurance and plasma variables. A paired t-test with Bonferroni’s correction was used to compare treatment differences between Day 1 and Day 2. The probability of a type I error less than 5% is considered statistically significant and 5–10% is considered moderately significant. Cohen’s d was used to indicate the effect size of intervention on recovery (endurance performance improvement from Day 1 to Day 2). 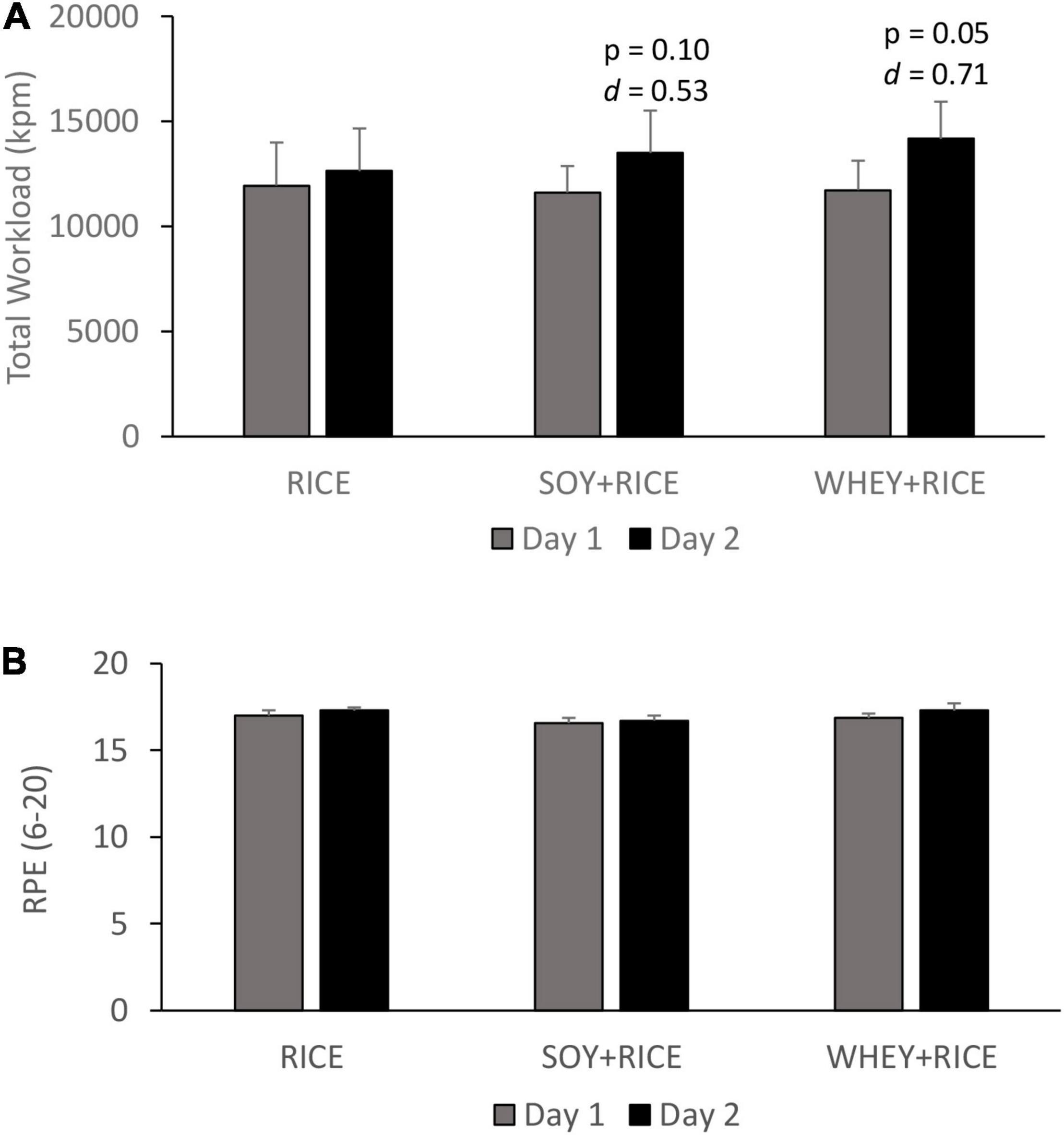 A significant difference between Day 1 and Day 2 indicates the magnitude of recovery from the Day 1 exercise. On Day 2, the total exerted cycling work increased by 5.7, 16.2, and 20.7% above Day 1 for the RICE, SOY-RICE, and WHEY-RICE supplemented conditions, respectively. Significant improvements in cycling time to exhaustion and total work exerted (in kilopond) from Day 1 were observed during the WHEY + RICE trial and to a moderate extent during the SOY + RICE trial. No improvement in cycling time to exhaustion and total workload between Day 1 and Day 2 was observed in the RICE trial. The protein content of SOY + RICE was only half of the WHEY + RICE drink (Table 1). The magnitude of improvements was similar for the SOY + RICE and WHEY + RICE supplemented conditions. 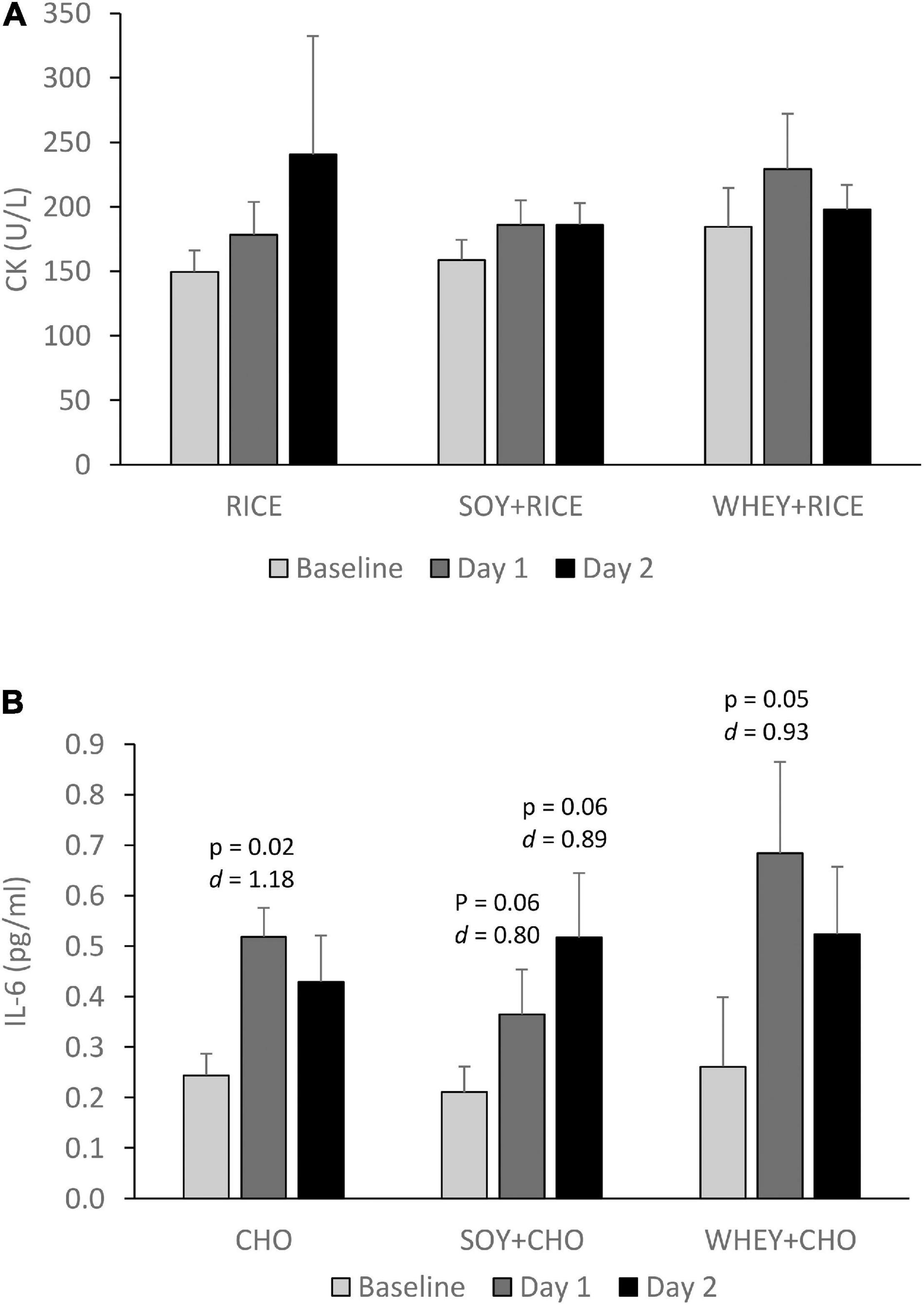 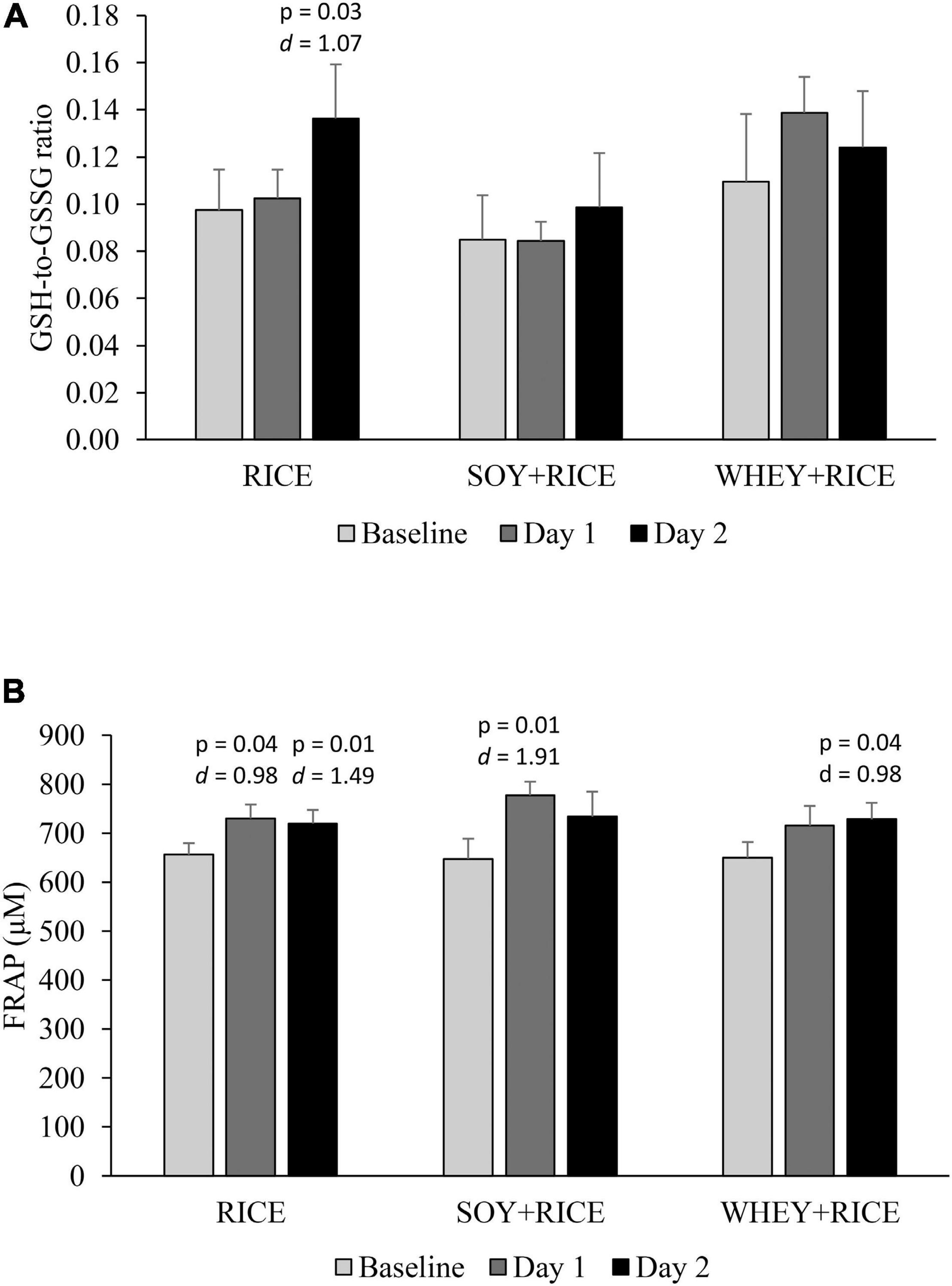 Pre-exercise carbohydrate supplementation (2–3 h prior to exercise) improves a time-to-exhaustion running performance (Chryssanthopoulos et al., 2002). This study asked the question of whether adding a small amount of protein provides immediate benefit for endurance performance and subsequent fatigue recovery on Day 2 against the same exercise challenge, compared with isocaloric carbohydrate alone drink. In this study, no immediate performance enhancement effect of protein addition was observed. However, endurance performance against the same cycling test was significantly improved on Day 2 when protein was included in the pre-exercise carbohydrate drink, without a significant difference between whey protein isolate (20% improvement) and natural soy (16% improvement). Since protein is not the major fuel to sustain high-intensity endurance exercise, the finding of this study implicates a requirement of dietary nitrogen for post-exercise recovery.

The result of this study demonstrates a carry-over effect of pre-exercise protein supplementation for high-intensity endurance performance on the next day. The underlying mechanism for this delayed effect remains unclear. Exercise challenge causes tissue damage and triggers cell regeneration after mobilization of hematopoietic progenitor cells and endothelial progenitor cells into the sites of damage during inflammation (Krüger et al., 2015; Wu et al., 2019a,b; Lee et al., 2021). The cell regeneration process requires nitrogen source and time for DNA synthesis (Hosios et al., 2016), which might explain no immediate ergogenic effect of protein addition into the protein-containing carbohydrate drink, but a far-reaching improvement in high-intensity endurance performance on Day 2. We speculated that supplementing protein short after exercise can also produce a similar benefit. In a short-term training study, significant improvements in running performance with a less subjective feeling of performance capacity loss were observed when protein-containing carbohydrate supplements were orally given after exercise, compared with carbohydrate alone supplements (Hansen et al., 2015). It is generally known that amino acids and proteins exert a psychological effect on the brain under stressed conditions. Milk protein significantly improves mood and cortisol levels after stress among normal participants (Markus et al., 2000). Therefore, we could not preclude the possibility that the observed delayed effect on fatigue recovery is mediated by its dual effects on the brain and muscle.

Interleukin-6 is a pro-inflammatory cytokine produced as part of a signal that triggers healing after challenge. Exercise-induced recovery in endurance performance requires IL-6 (McGinnis et al., 2015; Marasco et al., 2018) and free radical production (Gomez-Cabrera et al., 2008) during inflammation. The inflammation process, involved with the elimination of injured tissue by phagocytosis followed by a protracted cell regeneration, is essential for recovery against physical challenge (Tidball, 2017). Increased leukocyte infiltration, satellite cell replenishment, and increased free radicals are normally observed in challenged muscle after aerobic cycling exercise without observable changes in plasma CK and GSH-to-GSSG ratio (Wu et al., 2019a,b). However, in this study, we do not find the difference in responses of IL-6, GSH-to-GSSG ratio, and FRAP against exercise among the three pre-exercise supplemented conditions, albeit better exercise recovery outcomes after consumption of protein-added rice supplements. This suggests that nutritional nitrogen source is a limiting factor for post-exercise recovery.

Soy supplementation has been shown to lower systemic inflammation (Mangano et al., 2013) and oxidative stress (Tikkanen et al., 1998; Jenkins et al., 2000) for non-exercise individuals. However, in this study, we could not observe the suppressive effect of soy addition on exercise-induced IL-6 elevation as well as the difference in antioxidant markers. The absence of decreased plasma GSH-to-GSSG ratio together with slightly elevated FRAP suggests that the oxidative stress produced during the exercise test is sufficiently accommodated by endogenous antioxidant capacity in these young men. In addition, the previously observed antioxidant effect of soy may not be mediated by the neutralization of free radicals.

It is worthy to note that the SOY-RICE drink used in this study has only 50% of protein of the WHEY-RICE drink. However, the performance improvement on Day 2 was similar for the SOY-RICE and WHEY-RICE drinks. We could not preclude the possibility that other ingredients in natural soy than protein play a role in facilitating the physiological recovery against the exercise challenge.

A major limitation of this study is the low sample size. Furthermore, the potential influence of different fat contents is another inevitable limitation for such type of dietary study. Therefore, the generalization of the knowledge produced from the current work should be interpreted with caution.

The result of this study demonstrated that consuming carbohydrate drinks (50 g) containing either natural soy or whey protein isolate 2 h before exercise provides no immediate benefit in performance enhancement at high intensity compared with isocaloric carbohydrate alone drink. However, fatigue recovery in endurance performance can be improved on Day 2 by including dietary protein into the pre-exercise carbohydrate drink. This study also provides encouraging evidence that natural protein-enriched soy supplementation, with less soy protein (10.6%), could produce a similar benefit in fatigue recovery as whey protein (19.7%).

The studies involving human participants were reviewed and approved by the University of Malaya Research Ethics Committee (UM.TNC2/RC/H&E/UMREC-115), and all participants gave written consent.

The handling editor declared a past co-authorship with one of the author C-HK.

Copyright © 2021 Tan, Hamzah, Huang and Kuo. This is an open-access article distributed under the terms of the Creative Commons Attribution License (CC BY). The use, distribution or reproduction in other forums is permitted, provided the original author(s) and the copyright owner(s) are credited and that the original publication in this journal is cited, in accordance with accepted academic practice. No use, distribution or reproduction is permitted which does not comply with these terms.