Background: Apolipoprotein A5 (ApoA5), an important modulator of plasma and hepatic triglyceride metabolism, has been found to be downregulated by metformin to improve non-alcoholic fatty liver disease. Meanwhile, exercise has been recommended as a therapeutic strategy for non-alcoholic steatohepatitis (NASH). However, no study has yet determined whether exercise affects hepatic ApoA5 expression or the inhibition of ApoA5 to toll-like receptor 4 (TLR4). We herein examined the effects of exercise on hepatic ApoA5 expression and the relevance of ApoA5 and TLR4-mediated pathway in mice with high-fat diet (HFD)-induced NASH.

Methods: Male C57BL/6J mice were built NASH model with high-fat diet for 12 weeks, and following mice were subjected to exercise for 12 weeks on a treadmill. Microscopy and enzyme-linked immunosorbent assay were used to measure histological analysis of liver and hepatic lipids, respectively. Quantitative real-time PCR and western blot were used to determined mRNA and protein levels of ApoA5 and TLR4-mediated nuclear factor kappa B (NF-κB) pathway components, respectively. ApoA5 overexpression plasmids transfected into mice to investigate the relevance of ApoA5 and TLR4.

Conclusion: The results demonstrated that exercise improved HFD-induced NASH by triggering the inhibitory effects of ApoA5 on the TLR4-mediated NF-κB pathway.

Non-alcoholic steatohepatitis (NASH) is a severe manifestation of non-alcoholic fatty liver disease (NAFLD) and has been considered the main cause of liver failure, cirrhosis, and cancer (Todoric et al., 2020). The lipid metabolic disorder is an important pathogenesis factor of NASH (Yu Y. et al., 2019). Reports have shown that more than 20% of patients with NASH will have developed cirrhosis during their lifetime (Younossi et al., 2018). Regrettably, no specific drugs have yet been approved for NASH, making liver transplantation the leading treatment method in recent years (Noureddin et al., 2018). At present, lifestyle modifications, such as exercise, have been primarily recommended for the prevention and treatment of NASH in the United States, Europe, and China (Fan and Farrell, 2009; Chalasani et al., 2012; European Association for the Study of the Liver et al., 2016). However, the mechanisms responsible for the protective effects of exercise against NASH have remained unclear.

Lipopolysaccharide is part of the outer membranes of gram-negative bacteria, with its circulating concentrations significantly increasing in mice with high-fat diet (HFD)-induced NASH (Aron-Wisnewsky et al., 2020). However, LPS was partially reduced after exercise (Yu C. et al., 2019). Moreover, mRNA and protein expression of ApoA5 was remarkably increased in mice with HFD-induced NASH (Ress et al., 2011; Feng et al., 2015; Lin et al., 2017), implying that the inhibitory effects of ApoA5 on TLR4-mediated signaling pathway depended on the reduction of circulating LPS concentrations in mice with HFD-induced NASH. This study therefore established a HFD-induced NASH model to investigate the effects of exercise on hepatic ApoA5 expression and determine the relevant of ApoA5 and TLR4-mediated signaling pathway.

Male C57BL/6J mice aged 6 weeks were purchased from the Experimental Animal Center of Guangdong Province (Guangzhou, China) and acclimated for 1 week. The mice were housed on a 12-h light–dark cycle at 22–24°C and were provided free access to food and water. All animal care and lab experimental procedures were conducted in accordance with the Chinese Guidelines for Animal Welfare and Experimental Protocols and were approved by the Animal Experiment Administration Committee of Guangzhou Sport University (2020DWLL-005). All mice were randomly divided into three groups: low-fat diet control group (LFD, n = 24), a high-fat diet group (HFD, n = 24), and a high-fat diet plus exercise group (HFD + EXE, n = 24). The LFD group received a low-fat diet containing 10% kcal from fat (D12450J, Research Diets Inc.), whereas the HFD and HFD + EXE groups were fed a HFD containing 60% kcal from fat (D12492, Research Diets Inc.) for 24 weeks, and after 12 weeks of HFD feeding, mice in HFD + EXE group were subjected to exercise training for 12 weeks. A day after the final training session, mice were killed under anesthesia (sodium pentobarbital 50 μg/g) for collection of serum and liver.

Fresh liver tissues were fixed with 4% paraformaldehyde solution for 24 h, embedded in paraffin, and sliced into 4-μm sections for hematoxylin-eosin (H&E) staining and Sirius Red staining. The NAFLD activity score (NAS) was calculated according to the guidance provided by the Pathology Committee of the NASH Clinical Research Network (Kleiner et al., 2005): steatosis (<5% = 0, 5–33% = 1, 33–66% = 2, >66% = 3), lobular inflammation (none = 0, <2 foci = 1, 2–4 foci = 2, >4 foci = 3), and hepatocellular ballooning (none = 0, few = 1, prominent = 2). All features were scored in a blinded manner based on six fields of view per sample. Individual scores for each field of view were summed to calculate the NAS for each animal. Histological assessments were performed by a pathologist who was blinded to the treatment.

To analyze the effects of ApoA5 on TLR4-mediated signaling pathway, LFD mice were randomly divided into three groups (n = 4/group) and injected with an ApoA5 overexpression plasmid (pEGF-N1-ApoA5, 10 μg), negative control empty vector (pEGF-N1 vector, 10 μg), and normal saline through the tail vein, respectively. The mice were killed, after which serum and liver samples were harvested and stored for analysis after treatment for 3 days. The ApoA5 overexpression plasmid (pEGF-N1-ApoA5) and negative control empty vector (pEGF-N1 vector) were designed and purchased from Heyuan Biotechnology (OBIO, China).

To investigate the ability of ApoA5 to inhibit TLR4-mediated NF-κB pathway within a certain LPS concentration, HFD + EXE mice were randomly divided into three groups (n = 4/group) that subsequently received intraperitoneal injections of normal saline, 5 μg/kg⋅wt LPS and 10 μg/kg⋅wt LPS, respectively. After the mice were killed, serum and liver samples were harvested and stored for analysis after treatment for 12 h. LPS (Escherichia coli, 0111:B4) was purchased from Sigma (St. Louis, MO).

The primer sequences used herein are detailed in Table 1. Expression levels were normalized to those of the housekeeping gene GAPDH.

All data were expressed as mean ± standard error of the mean. Statistical significance was evaluated using one-way analysis of variance with the Bonferroni test for multiple comparisons. All analyses were performed using GraphPad Prism 5.0, with a P value of ≤0.05 indicating statistical significance. 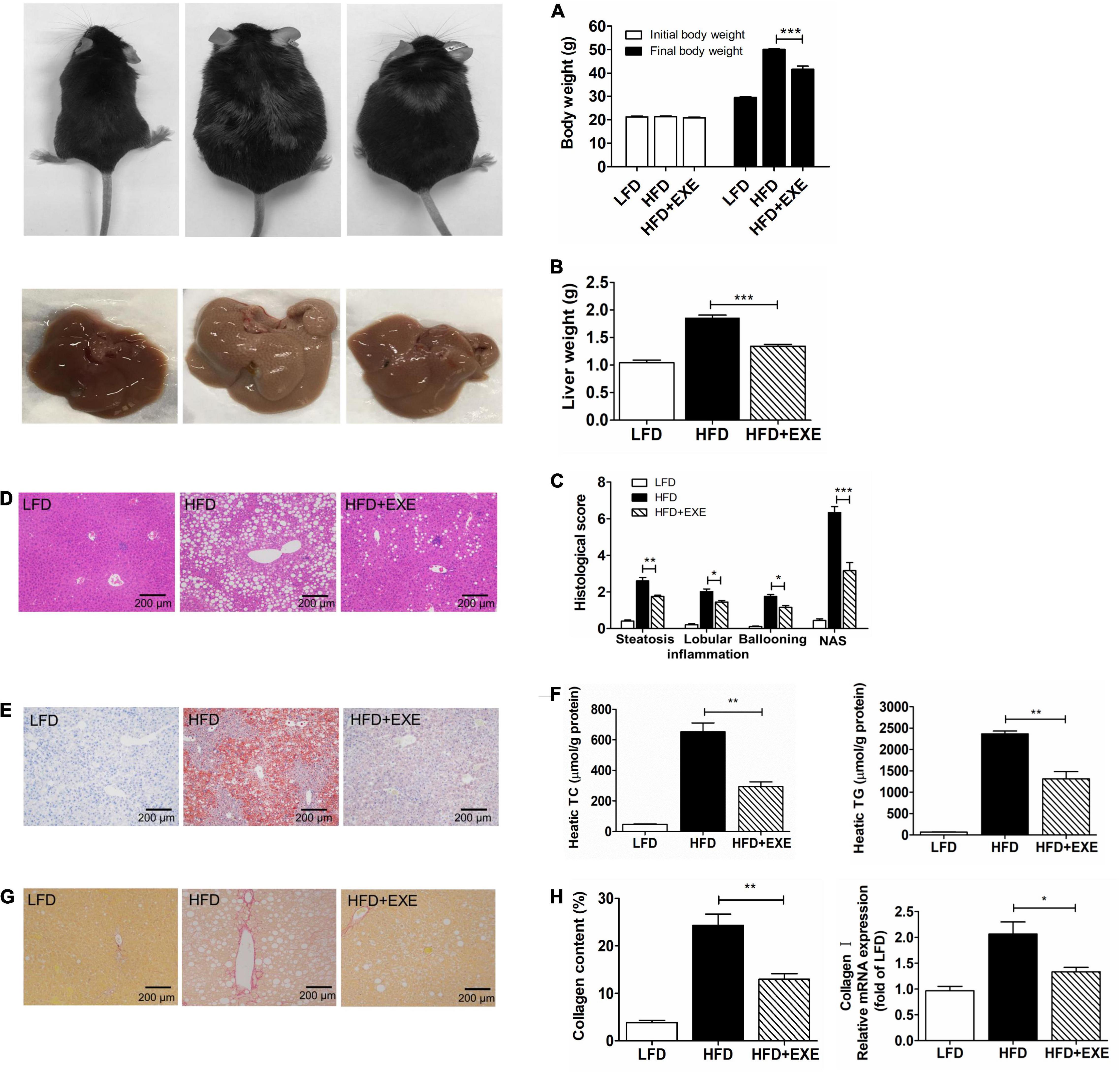 Compared to the LFD group, the HFD group exhibited significantly higher circulating LPS concentrations (609.42 ± 42.21 vs. 71.11 ± 14.15 ng/mL), which sharply declined after exercise (230.88 ± 35.03 vs. 609.42 ± 42.21 ng/mL) (Figure 2A). Although exercise slightly decreased ApoA5 mRNA and protein expression in the liver, no significant difference in hepatic mRNA and protein expression of ApoA5 was observed between the HFD and HFD + EXE groups (Figures 2B,C). Compared to the LFD group, HFD group exhibited higher levels of TLR4 (Figures 2B,D). Exercise reduced both mRNA and protein levels of TLR4 (Figures 2B,D). Moreover, MyD88 and NF-κBp65 mRNA and protein levels were also markedly lowered by exercise (Figures 2E,F). Supporting such findings, one study showed that high expression of ApoA5 can inhibit TLR4 expression (18). The aforementioned results implied that exercise enhanced the ability of ApoA5 to inhibit the TLR4-mediated signaling pathway at certain LPS concentrations. 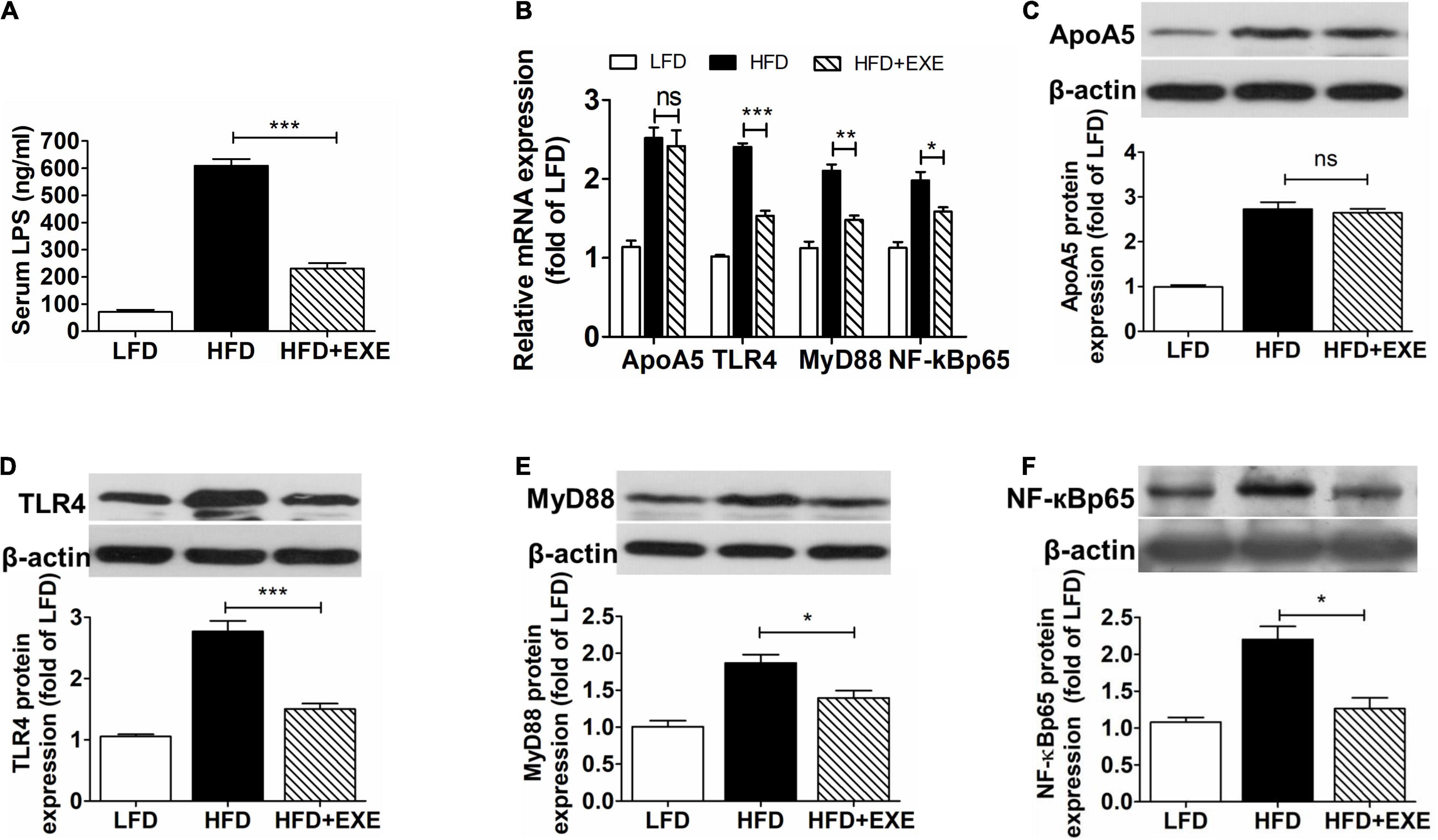 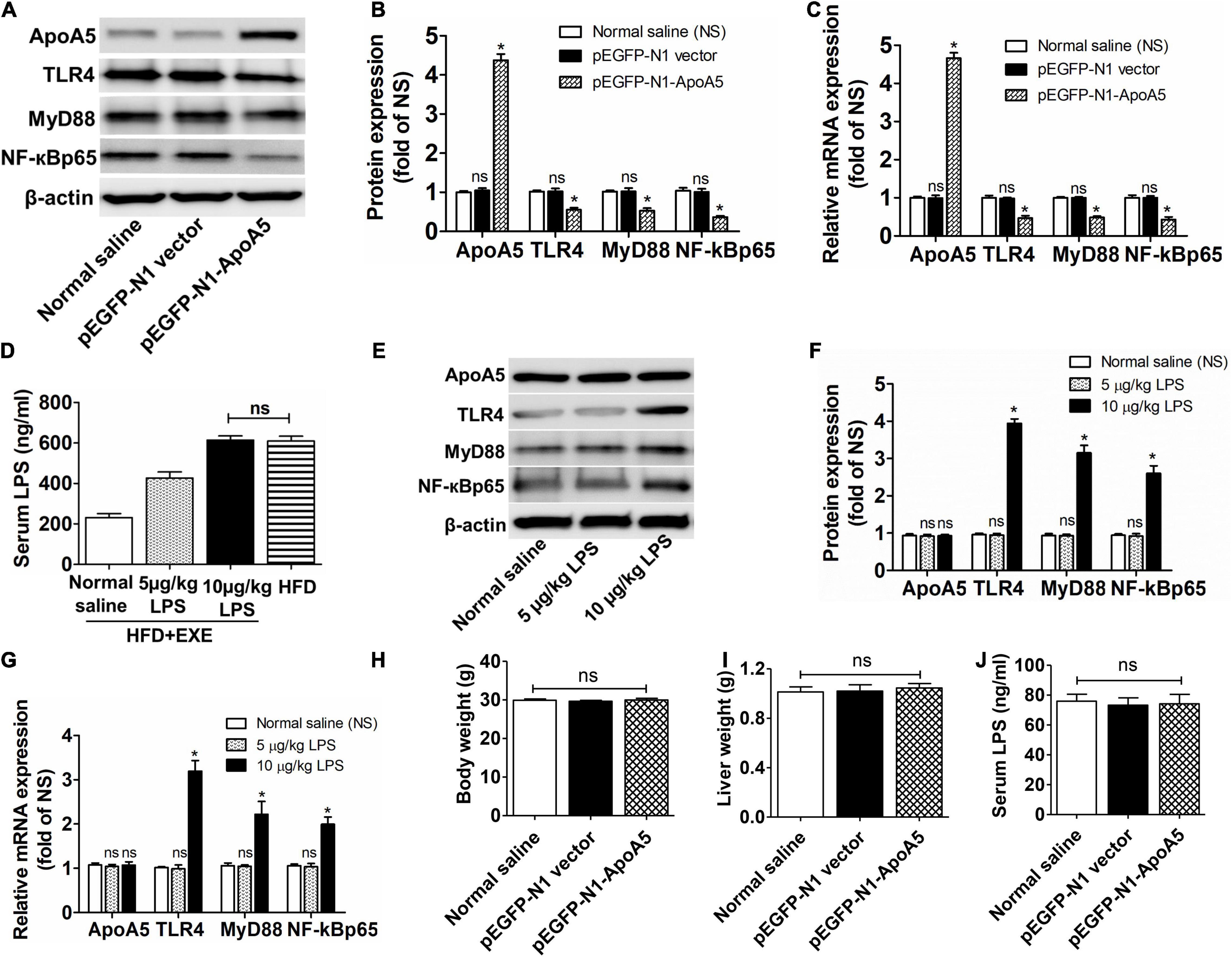 Non-alcoholic steatohepatitis has been associated with hepatic disease progression, development of cirrhosis, and hepatocellular carcinoma (Ibrahim et al., 2018). The ideal therapy for NASH is one that involves effectively reversing liver injury and fibrosis and improving or at least having no negative effects on other metabolic parameters or cardiovascular comorbidities (Sheka et al., 2020). Lifestyle modifications, such as diet control and exercise, have been the primary treatment for NASH (Goncalves et al., 2013; Neuschwander-Tetri, 2020). Exercise is an important strategy for preventing and treating NASH given its ability to decrease hepatic fat content and insulin resistance, as well as modify de novo synthesis of free fatty acids, all of which have an effect on NASH (van der Windt et al., 2018). The present study also confirmed that exercise not only reduced body weight, liver weight, and hepatic lipid accumulation but also attenuated hepatic inflammation and fibrosis in mice with HFD-induced NASH.

Evidence has shown that ApoA5 plays an important role in maintaining plasma TG levels and in the pathogenesis of NAFLD given the association between ApoA5 and storage of TG in intrahepatic lipid droplets (Forte and Ryan, 2015). Similarly, simultaneously increased hepatic TG contents and ApoA5 expression had been detected in our mice with HFD-induced NASH. Studies have observed that patients and mice with NAFLD have elevated levels of hepatic ApoA5 mRNA and protein, which were markedly downregulated after amelioration of hepatosteatosis (Ress et al., 2011; Feng et al., 2015; Lin et al., 2017). Our study also demonstrated that mice with HFD-induced NASH had higher hepatic ApoA5 expression, which remained unchanged after exercise intervention. Interestingly, exercise resulted in a considerable reduction in hepatic TLR4, MyD88, and NF-κBp65 expression and circulating LPS concentrations.

Toll-Like Receptor 4, the main receptor for the recognition of LPS, is upregulated in endotoxin-induced liver injury (Takayashiki et al., 2004). In response to LPS, TLR4 activates the NF-κB pathway to release NF-κBp65 (Medvedev et al., 2000; Byun et al., 2015), which subsequently translocates to the nucleus and stimulates the transcription of inflammatory genes (Li et al., 2014). Therefore, targeting the TLR4-mediated NF-κB pathway may be one method of alleviating hepatic inflammation in NASH. Tao et al. observed that increased ApoA5 expression could attenuate liver injury by inhibiting the TLR4-mediated NF-κB pathway, although the inhibitory effects weakened with increasing LPS concentrations (Tao et al., 2019). Serum LPS levels significantly increased after HFD administration, which were partially reduced after exercise (Yu C. et al., 2019). Based on the results of previous studies and our own, we hypothesized that exercise enhanced the ability of ApoA5 to inhibit the TLR4-mediated NF-κB pathway by lowering LPS concentrations.

To test this hypothesis, we performed the ApoA5 transfection and LPS intervention studies, which showed that increased ApoA5 expression indeed inhibited the expression of TLR4, MyD88, and NF-κBp65—crucial cytokines involved in the TLR4-mediated NF-κB pathway (Figures 2, 3). However, the inhibitory effects of ApoA5 declined when circulating LPS concentrations increased to match those observed in HFD mice (Figure 3D). The current study found that exercise could remarkably reduce serum LPS concentrations while maintaining increased hepatic ApoA5 expression, which triggered the inhibitory effects on the TLR4-mediated NF-κB pathway.

In conclusion, exercise alleviated HFD diet-induced hepatic steatosis, inflammation and fibrosis, all of which were characteristics of NASH. Notably, exercise did not reduce ApoA5 expression but instead increased its ability to suppress TLR4-mediated NF-κB pathway by lowering LPS concentration in mice with HFD-induced NASH. Taken together, our results suggested that exercise may target the ApoA5-TLR4 pathway to improve NASH.

The animal study was reviewed and approved by the Animal Experiment Administration Committee of Guangzhou Sport University (2020DWLL-005).

Copyright © 2021 Yu, Yu, Cheng, Liu, Fang, Liu and Zhu. This is an open-access article distributed under the terms of the Creative Commons Attribution License (CC BY). The use, distribution or reproduction in other forums is permitted, provided the original author(s) and the copyright owner(s) are credited and that the original publication in this journal is cited, in accordance with accepted academic practice. No use, distribution or reproduction is permitted which does not comply with these terms.