College of Energy and Mining Engineering，Shandong Univeristy of Science and Technology,Qingdao,China, China

Reliable estimation of fracture network length and morphology in hydrofracturing is crucial for controlling and optimizing fracturing effects. Hydraulic fracture propagation will be affected by a variety of factors to produce deflection, resulting in different fracture network morphology. To study the spatial deflection behaviours of multiple parallel hydraulic fractures, three-dimensional engineering-scale numerical model for multistage fracturing is established to study the induced shear stress disturbance and unstable spatial propagation behavior of hydraulic fractures under different perforation cluster spacing. In the model, the thermal diffusion, fluid flow and deformation of rock between the rock matrix and fluid in pores and fractures are considered to describe the thermal-hydro-mechanical coupling. In this study, the results show that the thermal effect between fracturing fluid and rock matrix is an important factor affecting fracture propagation, and thermal effects can increase induced shear stress area and promote fracture propagation. The induced shear stress disturbance caused by fracture propagation is superimposed in multiple fractures, resulting in stress shadow effect and spatial deflection of parallel fractures. The stress shadow areas and the spatial deflection of parallel hydraulic fractures will increase with the decrease of multiple perforation cluster spacing.

Reliable estimation of fracture network length and morphology in hydrofracturing is crucial for controlling and optimizing fracturing effects. Hydraulic fracture propagation will be affected by various factors, resulting in different fracture network morphology, including the coupling of multiple physical fields in the formation. Multiple physical fields coupling in formation should be considered to explain the fracture propagation behaviours. The linear thermal-pore-elastic effects and a combination of fine and coarse meshes have been used to model thermal-hydro-mechanical (THM) coupling processes in fractures (Kohl et al., 1995; Ghassemi and Zhou, 2011; Zhao et al., 2015). Based on the mixed finite element-finite volume method, a three-dimensional (3D) hydrofracturing model embedded in the natural fractures was proposed considering thermal effects (Li et al., 2016).

In this study, an engineering-scale 3D numerical model of multistage hydrofracturing of horizontal well is developed for the study of spatial fracture deflection and induced shear stress disturbance considering thermal effects, and the typical perforation cluster spacing are set to study the influences of cluster spacing on spatial fracture deflection and stress shadows.

In this study, the physical fields involved in the fracturing process of reservoir rock include the temperature field, fluid field, and solid field (Wang et al., 2019; Wang, 2020). The matrix deformation governing equation of reservoir rock is as follow:

where L is the differential operator, is the effective stress tensor, is the Biot coefficient, m is the element tensor, is rock mass pore fluid pressure, is saturated bulk density of rock, and g is the gravity vector.

The following Eqs. 2, 3 are the governing equations of rock matrix seepage and fluid flow in fractures, respectively:

where is the inherent permeability of pore structure, is the fluid velocity in the pore, is pore fluid stiffness, is solid skeleton stiffness, is the volumetric strain, is the current moment, is fracture inherent permeability, is fluid velocity in fracture, is fluid pressure in fracture, is fluid density in fracture, is the parameter describing rock compressibility under fluid action, and is the fracture strain rate. Some detailed contents, such as numerical implementation, proppant model, elastic constitutive equation, and fracture criterion based on fracture energy, were omitted to avoid redundancy, which could be found in the related references (Wang et al., 2019; Wang, 2020).

The governing equation of thermal effects between the rock matrix and fluid in pores and fractures is as follows:

The differential governing Eqs. 1–3 of solid deformation of the rock matrix, fluid flow in pores and fractures, and thermal effects are discretized using the conventional finite element method. The form of heat transfer between element nodes is shown in Figure 1, and the temperature and heat flux at the nodes are as follows:

where is the temperature change of the rock element, is the volume change, is the initial volume, and is the linear thermal expansion coefficient of the rock matrix. 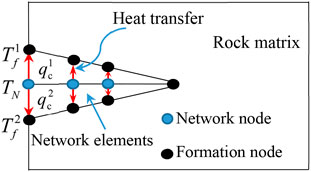 FIGURE 1. Heat transfer between finite element nodes in the formation and network. 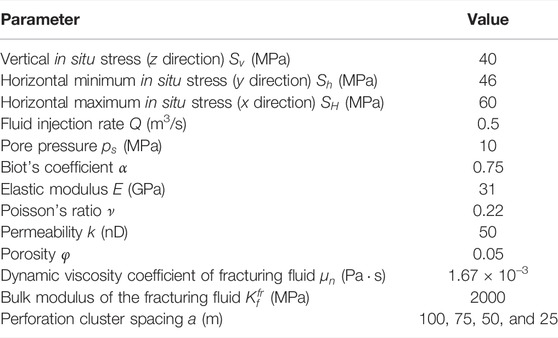 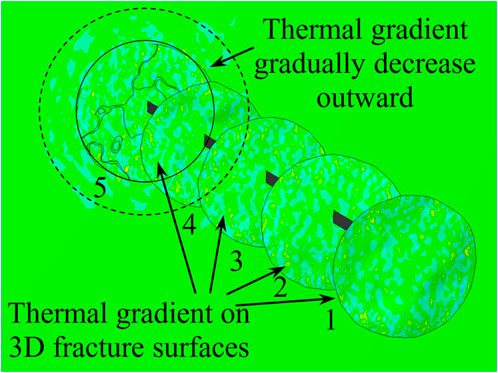 Figure 5 shows the results of fracture propagation at each stage of alternate fracturing. The first fracture propagates in space close to the plane because there is no interference from other fractures. The fracture 3 propagates in space close to the plane due to the spacing between fracture 1 and fracture 3 is 100 m (This is equivalent to increasing the spacing between sequentially activated fractures). The fracture 2 is disturbed by fractures 1 and 3, and the deflection is intensified. Similarly, fracture 4 propagates after fracture 5 has completed fracturing and is deflected by disturbance from fracture 3 and fracture 5. 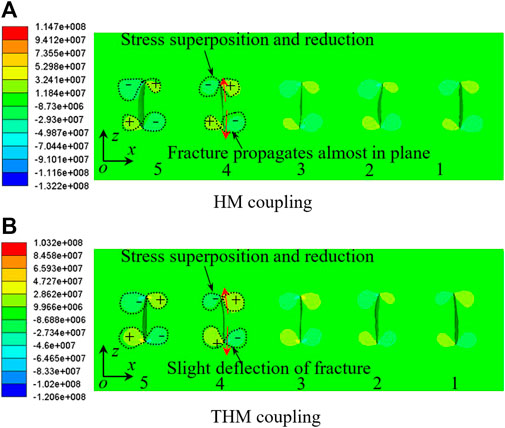 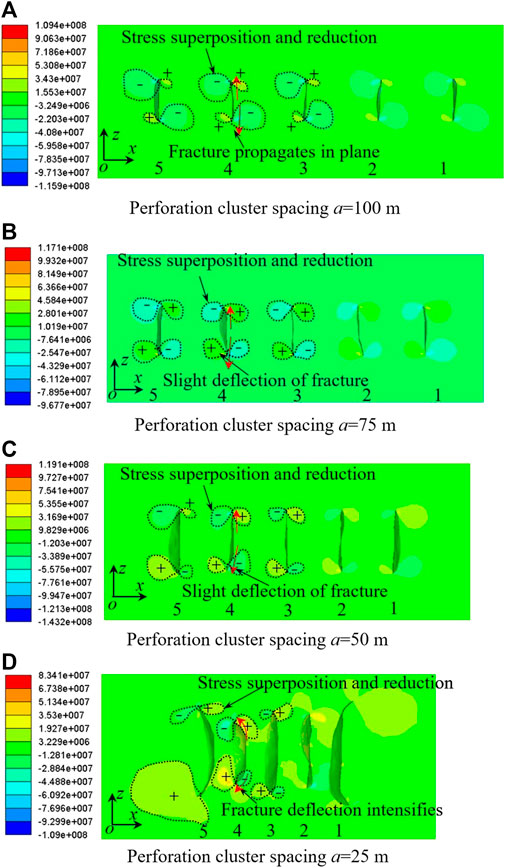 The conclusions of this study can be summarized as follows:

2) As the spacing of perforation clusters decreases, the superposition area of shear stress field will increase, and the shear stress disturbance will become stronger, thus increasing the mutual interference between parallel fractures. In alternate fracturing, as fractures are activated alternately, the superposition and reduction of shear stress fields around fractures occur, decreasing the mutual interference between parallel fractures.

Copyright © 2022 Wang, Liu, Cui and Liu. This is an open-access article distributed under the terms of the Creative Commons Attribution License (CC BY). The use, distribution or reproduction in other forums is permitted, provided the original author(s) and the copyright owner(s) are credited and that the original publication in this journal is cited, in accordance with accepted academic practice. No use, distribution or reproduction is permitted which does not comply with these terms.