The aim of this study was to describe the expression of genes, including ameloblastin (Ambn), amelogenin X chromosome (Amelx), and enamelin (Enam) during early (pre-secretory) tooth development. The expression of these genes has predominantly been studied at post-secretory stages. Deoxyoligonucleotide microarrays were used to study gene expression during development of the murine first molar tooth germ at 24 h intervals, starting at the 11th embryonic day (E11.5), and up to the 7th day after birth (P7). The profile search function of Spotfire software was used to select genes with similar expression profile as the enamel genes (Ambn, Amelx, and Enam). Microarray results where validated using real-time reverse transcription-polymerase chain reaction (real-time RT-PCR), and translated proteins identified by Western-blotting. In situ localization of the Ambn, Amelx, and Enam mRNAs were monitored from E12.5 to E17.5 using deoxyoligonucleotide probes. Bioinformatics analysis was used to associate biological functions with differentially expressed (DE; p ≤ 0.05) genes. Microarray results showed a total of 4362 genes including Ambn, Amelx, and Enam to be significant DE throughout the time-course. The expression of the three enamel genes was low at pre-natal stages (E11.5–P0) increasing after birth (P1–P7). Profile search lead to isolation of 87 genes with significantly similar expression to the three enamel proteins. These mRNAs were expressed in dental epithelium and epithelium derived cells. Although expression of Ambn, Amelx, and Enam were lower during early tooth development compared to secretory stages enamel proteins were detectable by Western-blotting. Bioinformatic analysis associated the 87 genes with multiple biological functions. Around 35 genes were associated with 15 transcription factors.

Interactions between oral epithelium and neural crest derived mesenchyme are considered essential for tooth development. Cells of the epithelium expand and proliferate, invaginating into the condensing mesenchyme, and subsequently forms the tooth germ (Thesleff, 1995; Chai et al., 2000; Sharpe, 2001), this process been modulated by several growth factors (Thesleff and Mikkola, 2002; Zhang et al., 2005). As the invaginating epithelium expands it is surrounded by condensing mesenchyme transforming into a bud and cap, subsequently developing into the bell stage (Tucker and Sharpe, 1999; Fleischmannova et al., 2008). Mesenchymal cells facing the basement membrane differentiate into dentin producing odontoblasts, while the adjacent layer of epithelial cells differentiates into ameloblasts which secrete the organic enamel matrix (Thesleff and Hurmerinta, 1981).

Ameloblastin (encoded by Ambn) is expressed in the mineralizing matrix of bones and teeth. This matrix protein inhibits ameloblast proliferation and is essential for ameloblast adhesion affecting thickness of the enamel layer (Zhang et al., 2011).

Enamelin (encoded by Enam) is a minor constituent of the extracellular matrix but plays a critical role in normal enamel formation. Enamelin is required for the deposition of tooth enamel, but it is also necessary to maintain the ameloblast phenotype, as is the case for ameloblastin (Hu et al., 2011).

The day of the vaginal plug was set to embryonic day E0.5 in pregnant female CD-1 mice (n = 3–5). The embryo/fetus developmental stage was assessed using the Theiler criteria (Kaufman, 1992).

The animal house had 12 h light/dark cycle and was thermostated at 21°C with relative humidity at 55 ± 5%. Water and fodder was provided ad lib. The animals were housed according to the regulations of the Norwegian Gene Technology Act of 1994.

Female mice pregnant at various stages were sacrificed by cervical dislocation and embryos quickly removed from the amnion sac and decapitated.

The first mandibular molar tooth germs was dissected for microarray and real-time RT-PCR analysis from CD-1 embryos at various developmental stages starting at the 11th embryonic day (E11.5) and ending at the 7th day after birth (P7).

Total RNA was extracted from tooth germs as described previously by Osmundsen et al. Murine deoxyoligonucleotide (30 k)-microarrays printed with Operon murine v.3 oligo-set (Qiagen GmbH, Hilden, Germany) were purchased from the NTNU Microarray Core Facility (Norwegian University of Science and Technology, Trondheim, Norway). Spikes from A. thaliana (purchased from Stratagene, La Jolla, CA, USA) were used to normalize the fluorescence within each microarray and to monitor the quality of the hybridization. Complementary DNA synthesis, labeling, and hybridization were carried out as described previously (Osmundsen et al., 2007).

After hybridization and scanning the resulting expression data (48 arrays) was assembled into a single data file. Cy3 and Cy5 channels of each slide were treated as single channel data as if derived from single color arrays to facilitate statistical and bioinformatic analysis. The genes exhibiting a net fluorescence fewer than 200 were excluded. LOESS normalized fluorescence intensities (median values, with background subtracted) from each of the two channels were converted to log2-scale, and the log2-values were subjected to z-score normalization (Cheadle et al., 2003).

The ANOVA facility of the Spotfire program was used to select genes which exhibited statistically significant differences in levels of expression (p < 0.05) between various developmental stages. False discovery rate (FDR; 0.05; Benjamini and Hochberg, 1995; Reiner et al., 2003) was used to correct selection of genes for false positives.

Experimental design and resulting microarray files have been deposited in the MIAME database with reference E-MEXP-3581.

Profile search function of Spotfire software v.9 Decision Site for Microarray analysis software (TIBCO Spotfire, Somerville, MA, USA) was used to select differentially expressed (DE) genes with a similar expression pattern to that of pre-selected genes Ambn, Amelx, and Enam. The mean time-course for Ambn, Amelx, and Enam genes (normalized data) throughout the studied time-course was used as search criteria (master profile). The resulting expression profile was subjected to hierarchical clustering and the result presented as heat map. Unknown genes without an Entrez ID were omitted from this analysis.

In situ hybridization was used to visualize microarray and real-Time RT-PCR results for the genes of the expression profile and was carried out using a protocol essentially as described by Farquharson et al. (1990). ISH was performed in a Discovery XT hybridization instrument (Ventana Medical Systems, AZ, USA) according to the Ventana recommendations.2 The Ambn anti-sense probe, 5′-ggtttcagtcctggctggtgaggctgcaaggatggctgctgggtttca-3′, hybridizes to nucleotides 378–425 located within the coding sequence of NM_009664.

The Amelx probe, 5′-ggacaggggctgcatggagaacagtggaggcagaggtggctgtggtgc-3′, hybridizes to nucleotides 544–591 within the coding sequence of NM_009666. The Enam probe, 5′-tgtggctgtggctcttgtggattggtctggttgggtttggcggtctcc-3′ hybridizes to nucleotides 672–719 located within the coding sequence of NM_017468. The probe concentration was 0. 45 μg μl −1. The hybridization temperature was set to 57°C. Antibodies (diluted 1:2000) purchased from Jacksons Immuno (Jackson Immuno Research Europe, Suffolk, UK) and BlueMap kit (NBT/BCIP; Ventana Medical Systems) was used for detection and visualization. No counter-staining was used following ISH.

The quality of mRNA in the tissue was assessed using digoxigenin (DIG)-labeled poly dT deoxyoligonucleotide probes. The nature of the hybridization signals was ascertained by treating separate tissue sections prior to pre-hybridization with either RNAse (RNAseA, Qiagen, Hilden, Germany) or DNAseI (DNA-free™ Ambion, CA, USA). RNAse was used at a final concentration of 20 μg RNAseA ml−1, the tissue sections being incubated for 30–120 min at 37°C. The DNAse treatment was performed for 15–30 min at 90°C using a final concentration of 5 μg DNAse I μl−1. ISH micrographs were obtained using a Nicon Elipse E400 instrument (Nikon Corporation, Tokyo, Japan). 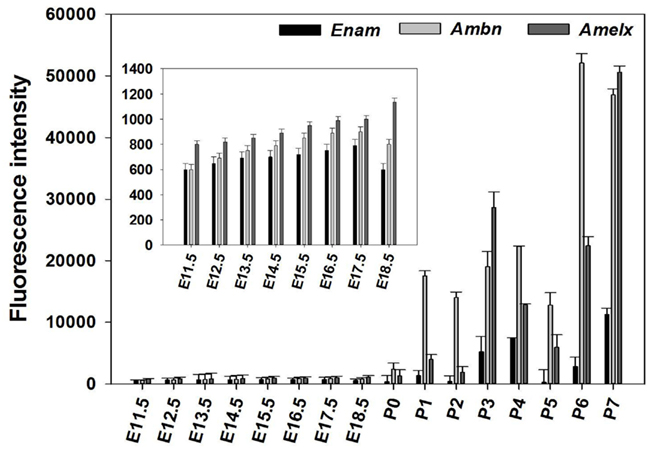 The microarray results showed a total of 4362 genes to be differentially (p ≤ 0.05) expressed at every time point studied (E11.5–P7), 1169 of which being without an Entrez ID and were consequently not used during further analysis. The remaining 2441 genes were used in a profile search using the mean time-course of expression for Ambn, Amelx, and Enam (Figure 2A). From the 2441 genes screened with the profile search function in Spotfire, 87 genes (Figure 2B) exhibited at time-course of expression similar that of Amelx, Ambn, and Enam. 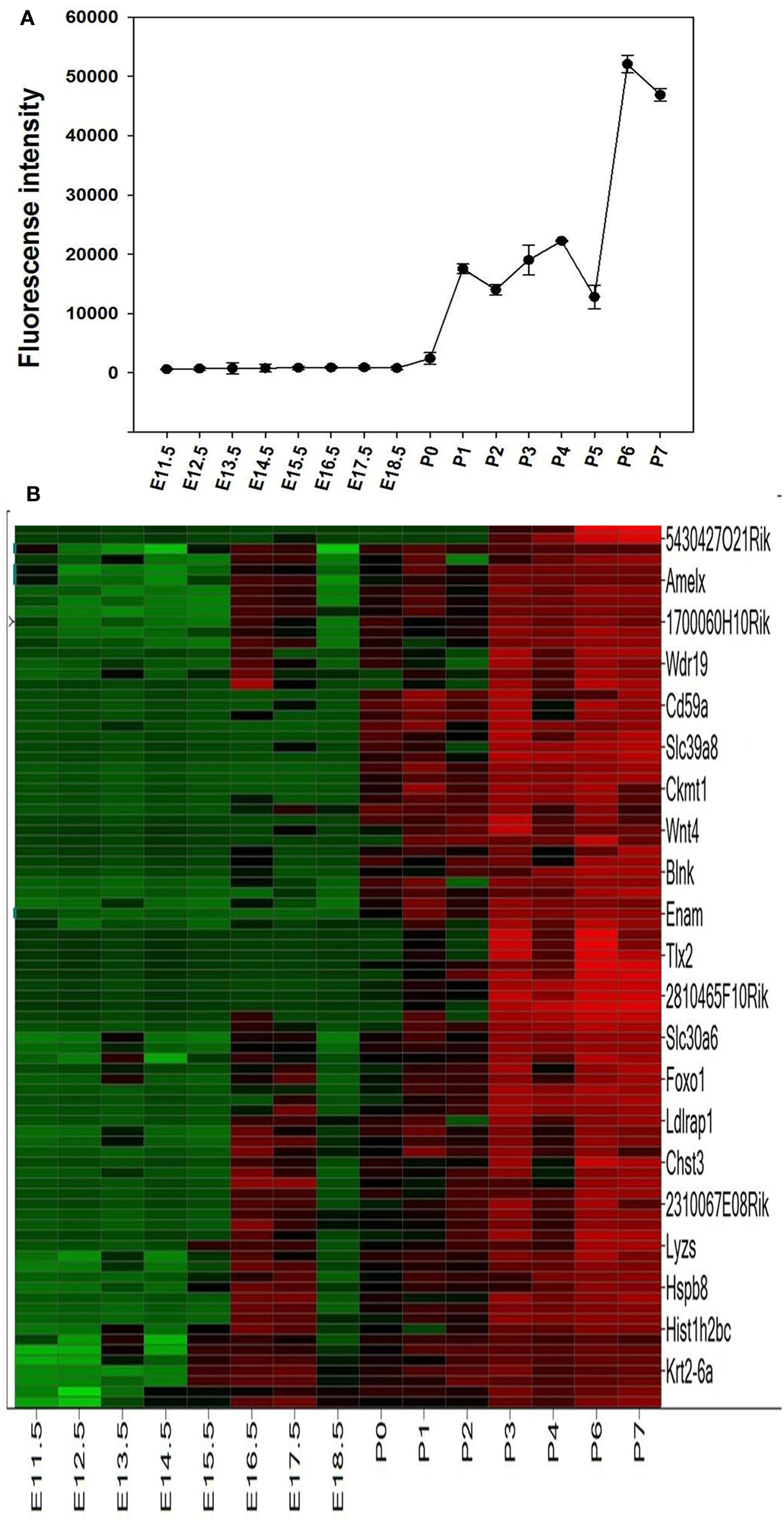 Figure 2. Profile search results. The mean net normalized fluorescence intensities for Ambn, Amelx, and Enam genes (A) at each time point was used as search criteria (master profile) for profile search. The resulting 87 genes were hierarchically clustered using the Euclidean distance and the result is presented as heat map (B). Columns represent different developmental stages and rows represent each gene. Each cell in the matrix represents the expression level of a gene at a certain time point/developmental stage. Green and red in cells reflect low and high expression levels, respectively. 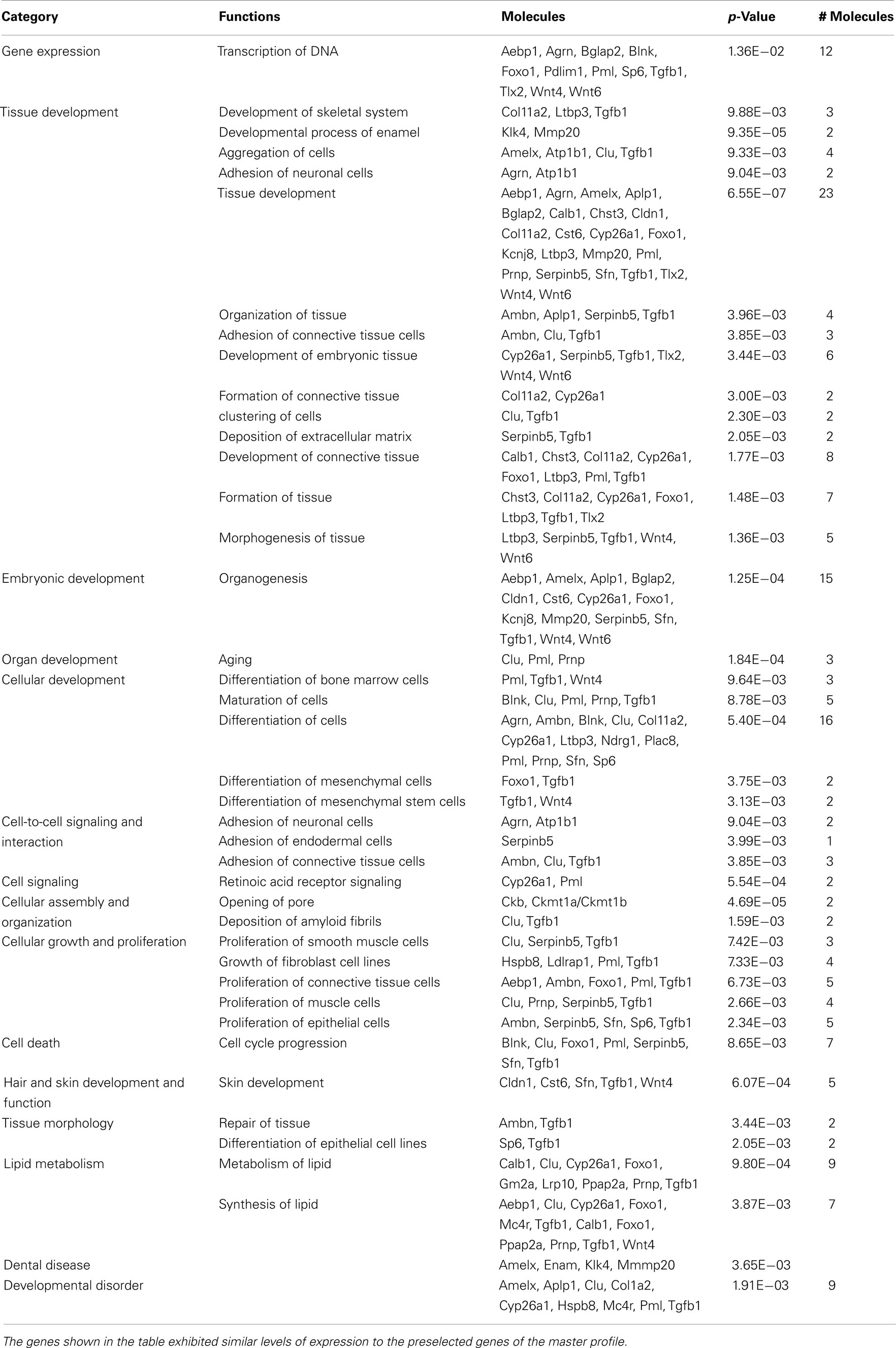 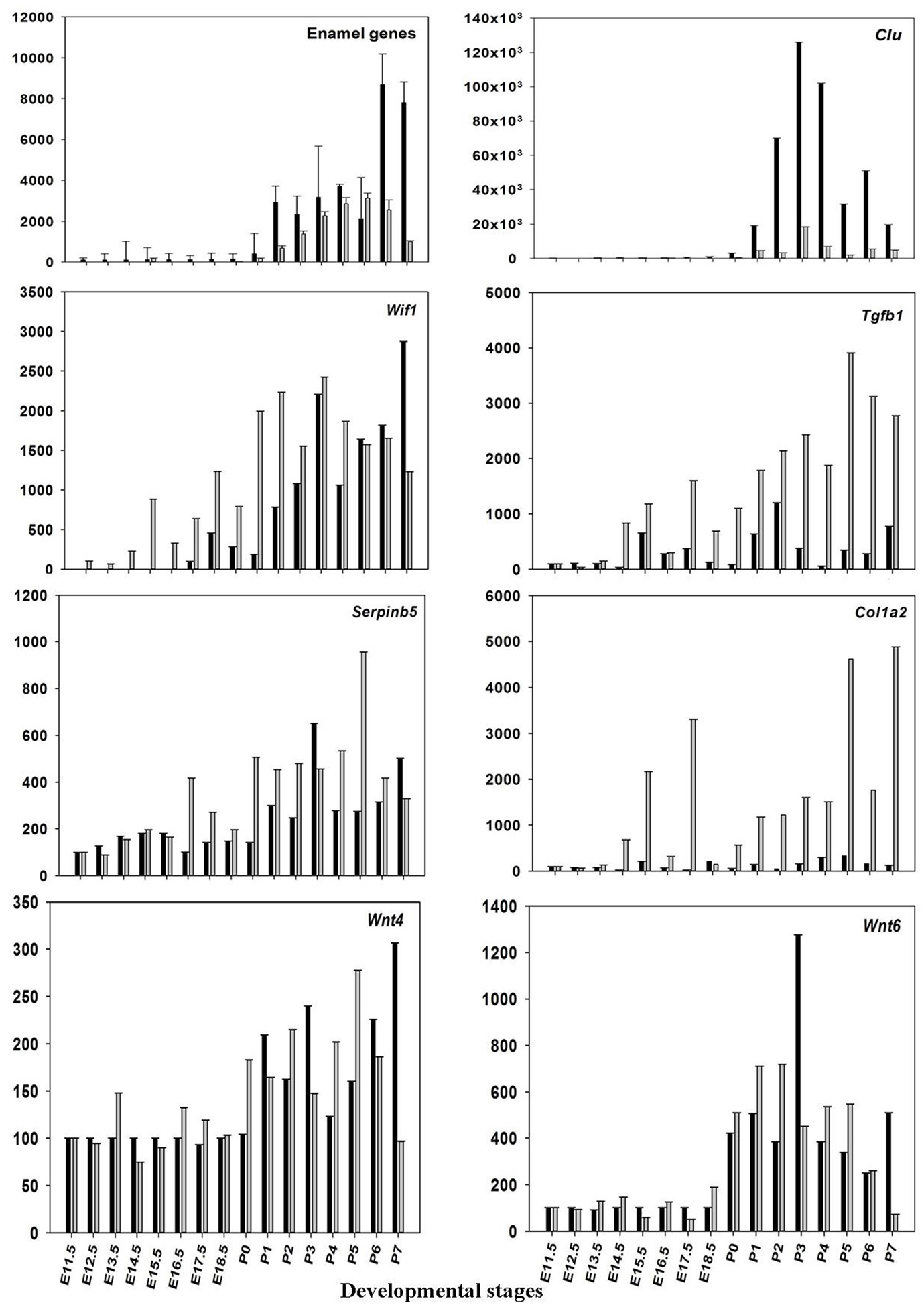 Figure 3. Validation of microarray data. The mean ratios (expression at E11.5 up to P7/expression at E11.5) for some of the differentially expressed (DE) genes (Amelx, Ambn, Enam, Wif1, Clu, Prnp, Mmp20, Col1a1, Tgfb1, Wint6, and Serpinb5) from the microarray data (black) and real-time RT-PCR (gray). Plotted microarray and real-time RT-PCR data are means derived from at least three biological triplicates at each time point and presented with SD.

Figure 4. Bioinformatic analysis. Transcription factor analysis performed using ingenuity (IPA) for the 87 genes exhibited a p-value of overlap <0.01 associating significantly 35 genes with 15 transcription factors. The genes verified by real-time RT-PCR highlighted with colored outlines and lines together with most of the associated genes (shaded gray).

During early odontogenesis Amelx, Ambn, and Enam mRNAs showed similar patterns of localization and were mainly observed in cells derived from dental epithelium (Figure 5). These three mRNAs were, however, also detected in the mesenchyme and mesenchyme-derived tissues. Expression of Enam and Ambn mRNA were also observed in cells known to form facial bone structures (Figure 5 arrows). In general the signal from the Amelx probe appeared stronger than signals from the Ambn or Enam probes. During the cap stage the area of the enamel knot exhibited a hybridization signal with Amelx only (Figure 5, E14.5). Treatment with DNase did not alter the hybridization signal. Hybridization with the sense probes consistently showed absence of positive signals (results not shown). Sections treated with RNAse showed no hybridization signals, suggesting the signal to originate from hybridization with RNA in the tissue (results not shown).

Figure 5. Localization of expression of Ambn, Amelx, and Enam mRNAs during early odontogenesis as detected by in situ hybridization. Detection of Amelx, Enam, and Ambn mRNA was carried out in dissected sections of tooth germs at various stages of development (E12.5–P2). The black arrows indicate mRNA expressed at future facial bone features. The magnifications were ×200 for E12.5–E13.5, ×100 for E14.5 and E15.5–P2.

Amelogenin was identified as a band of approximately 50 kDa detected at all developmental stages investigated, whereas an additional band of amelogenin of molecular weight of about 25 kDa was detected at post-natal stages, being the predominant protein band at P2–4 (Figures 6A,B). 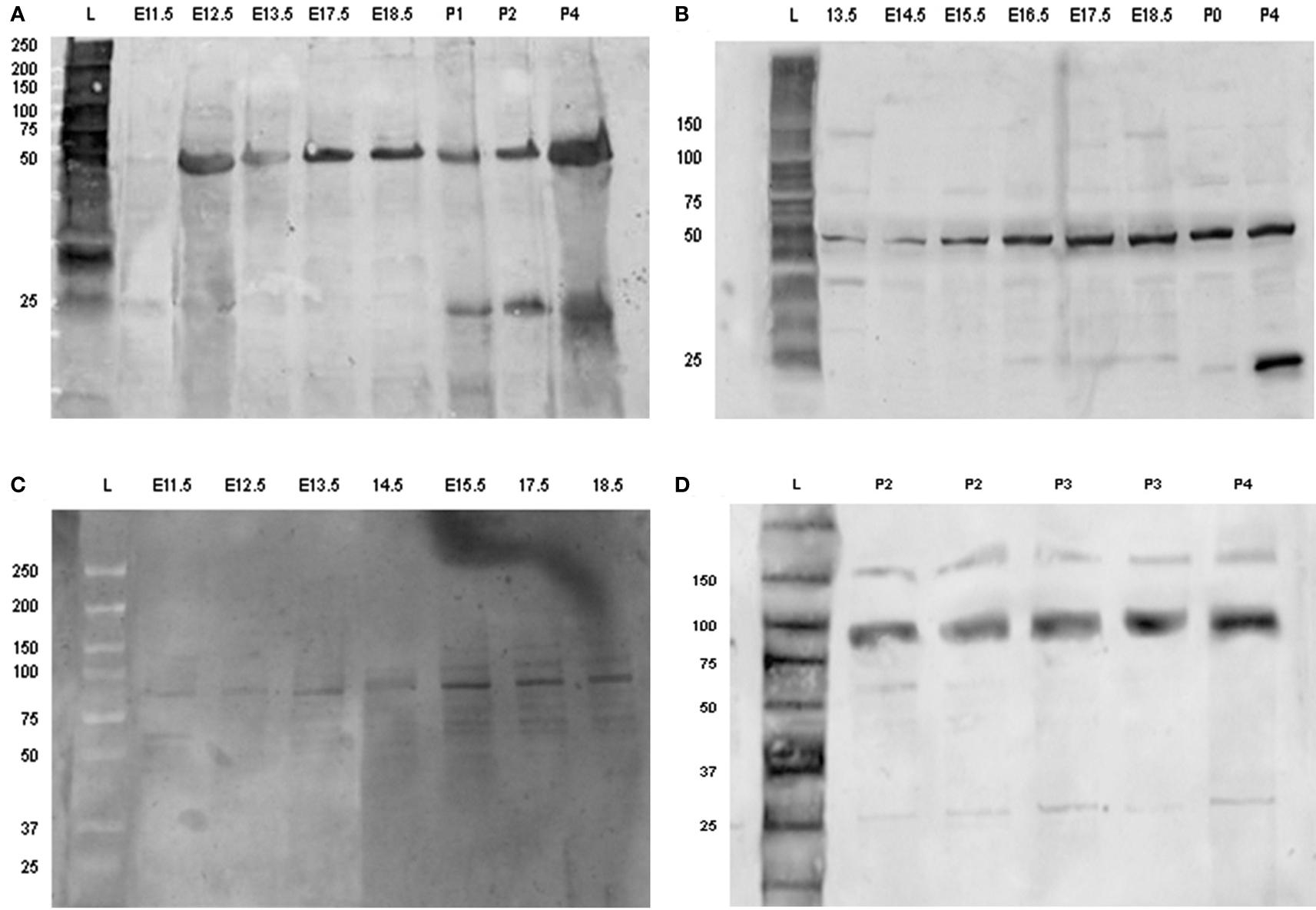 The ameloblastin antibody identified a single band of molecular weight of about 48 kDa at pre-secretory stages. This band was relatively weak at all time points (results not shown).

The combination of several techniques like microarrays, real-time RT-PCR, ISH, and immuno-blotting combined with bioinformatics may serve to provide a more comprehensive view of the cellular consequences of changes in gene expression occurring during murine tooth development. The major challenge is at the level of analysis of microarray data, i.e., isolation of DE genes which are functionally related. The profile search function, used in this study, has shown itself as a useful tool when searching for related genes in large sets of microarray gene expression data. This may also be useful to identify novel genes during murine tooth development.

Karavanova, I., Vainio, S., and Thesleff, I. (1992). Transient and recurrent expression of the Egr-1 gene in epithelial and mesenchymal cells during tooth morphogenesis suggests involvement in tissue interactions and in determination of cell fate. Mech. Dev. 39, 41–50.

Copyright: © 2012 Landin, Shabestari, Babaie, Reseland and Osmundsen. This is an open-access article distributed under the terms of the Creative Commons Attribution License, which permits use, distribution and reproduction in other forums, provided the original authors and source are credited and subject to any copyright notices concerning any third-party graphics etc.