Evolution of transfer RNA and the origin of the translation system

Thaís G. do Rêgo2 and

The origin of the translation system is at the center of discussions about the evolution of biological systems. In this context, molecules of transfer RNA (tRNA) are highlighted due to its ability to convey the information contained in nucleic acids with the functional information contained in the proteins. Despite many characteristics shared among tRNAs in various organisms, suggesting a monophyletic origin for this group of molecules, recent discussions have proposed a polyphyletic origin for this group, thus indicating that the shared features are products of evolutionary convergence (Di Giulio, 2013). The main arguments in favor of the model for polyphyletic origin of tRNAs, is based on the theory of exons and suggests that the introns played an important role uniting mini exons or genes, which enabled that minigenes with independent origins were grouped in a single transcription unit at the start of the biological system (Di Giulio, 2012a). Genes for tRNAs have one of the most conserved introns that we know, which would represent a remnant of the process that gave rise to this molecule, being the anticodon loop initially a minigene that was attached to the other loop or hairpin that gave origin to the modern structure of tRNAs (Di Giulio, 2012b). An evidence of this model was found in Nanoarchaeum equitans, where a single tRNA is encoded by two genes that are united after the transcription (Randau et al., 2005). Podar et al. (2013), analyzed the genome of N. equitans and suggested that the organization of genes in this organism is a derived character, being consequence of a process of genomic reduction that is associated with their lifestyle (Podar et al., 2013). Thus, the tRNAs would be monophyletic, having a single ancestor that gave origin to the diversity known today, as suggested by Lacey and Staves (1990). 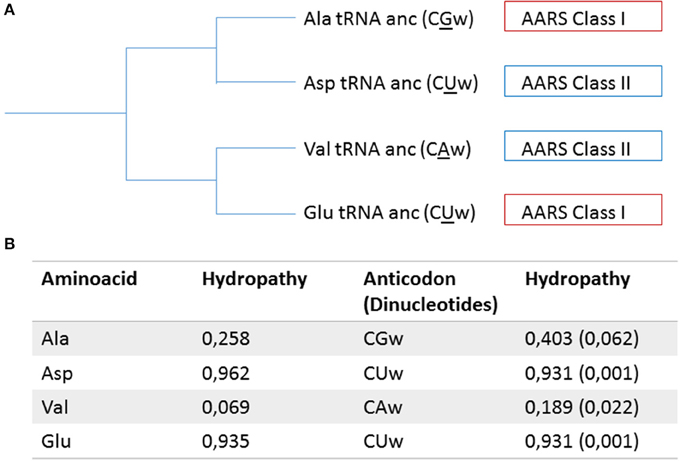 The Role of tRNAs in the Origin of Ribosomes

The origin of ribosomes must have occurred in the early biological evolution and developed for a long period until the structure currently found. Among the various molecules that are part of the ribosome, we can emphasize the 23S subunit, because, in the V region of the 23S ribosomal RNA it is found the site of Peptidyl Transferase Center (PTC), the portion responsible for the ribozyme activity performed by this molecule (Nissen et al., 2000). Studies indicate that the region V was the first to emerge and from this region the ribosome was formed (Davidovich et al., 2009; Fox, 2010). A catalytic portion of the PTC has a structure with organization of the type stem-elbow-stem and experiments have shown that small molecules with this type of organization can polymerize and perform similar function that were observed for the PTC (Davidovich et al., 2009). The same type of structural organization (stem-elbow-stem) is also observed in the structure of tRNAs, thus, Tamura (2011) by topological analysis, suggested that the catalytic site on the 23S rRNA has structural similarities to tRNA molecules and may have originated from the fusion of tRNA molecules. Farias et al. (2014) compared the similarity of the reconstructed ancestral sequences of tRNA with the PTC of Thermus thermophilus, and they obtained a sequence similarity of 50.53% when concatamers were built with the ancestors of tRNAs, to wit, LeutRNA-SertRNA-HistRNA-ProtRNA-TyrtRNA-PhetRNA-GlntRNA-GlytRNA-LystRNA and compared them with the portion of the catalytic of PTC. In this study the information content between the concatamers of ancestral tRNAs and the catalytic regions of PTC of various organisms were also compared, and a positive correlation among all molecules was observed, demonstrating that, despite the long evolutionary time, this molecule has vestiges of its early origin. This conservation must be essential for the maintenance of structural form assumed by the catalytic site in all species. Previous studies performed by Bloch et al. (1984, 1989), suggested the involvement of tRNAs in the formation of ribosomes. These analyzes suggested that the portion 5S Ribosomal presents similarities to tRNAs, and could have given rise to this ribosomal moeity. Evidence of the origin of the ribosomal RNAs from tRNA opens a new field of research, which may indicate a common origin for RNA molecules involved in the translation process. In this case, the translation system can be the oldest in the biologic system and we can indicate under what type of selective pressure the biological system evolved. Another field of research that opens up new perspectives is directly related to the origin and evolution of the coding system (genetic code) which must have arisen at the dawn of the early forms of life.

Molecules of tRNAs play an essential role in modern biological systems. According to the data discussed, these molecules have had this function since the beginning of the formation and organization of biological systems. The evolutionary pattern of diversification of tRNA may indicate how the chemical relationship between these molecules and aminoacyl-tRNA synthesases could have co-evolved to give origin to the system of correlation between anticodons and amino acids. This suggestion can assist in developing models for the structure of the genetic code. The similarity observed between the tRNA molecules and ribosomal RNAs, especially the PTC, suggest the importance of the tRNAs molecules in the assembly of the translation system, which certainly was a key event for the emergence of life on Earth.

Copyright © 2014 de Farias, do Rêgo and José. This is an open-access article distributed under the terms of the Creative Commons Attribution License (CC BY). The use, distribution or reproduction in other forums is permitted, provided the original author(s) or licensor are credited and that the original publication in this journal is cited, in accordance with accepted academic practice. No use, distribution or reproduction is permitted which does not comply with these terms.