An Individual with Both MUTYH-Associated Polyposis and Lynch Syndrome Identified by Multi-Gene Hereditary Cancer Panel Testing: A Case Report

Christopher A. Tan2 and

A 39-year-old male who works as a general manager presented to the Cancer Genetics Risk Assessment program for genetic counseling due to a personal history of rectal cancer at the age of 38. In addition to the rectal cancer, more than 20 adenomatous polyps were found in his colon. He underwent a laparoscopic total proctocolectomy with ileoanal J-pouch anastomosis and diverting loop ileostomy. The tumor was a superficially invasive, moderately differentiated adenocarcinoma, arising within a background of adenoma and multifocal high-grade dysplasia. Immunohistochemistry staining as part of the hospital's universal screening program for Lynch syndrome displayed intact MLH1, MSH2, MSH6, and PMS2 proteins; microsatellite instability (MSI) testing was not performed. The proband's father had a history of basal cell carcinoma at the age of 58 and five colon polyps at the age of 61. Colon cancer was reported in the proband's paternal uncle at the age of 70 and a paternal great-grandmother in her 50s. Finally, the proband reported that his mother had a hysterectomy at a young age due to an unspecified gynecologic cancer.

The proband underwent genetic testing with a 7-gene high-risk hereditary colon cancer panel which screened for variants in the APC, EPCAM, MLH1, MSH2, MSH6, MUTYH, and PMS2 genes. The proband was found to carry a homozygous pathogenic variant, c.1187G>A (p.Gly396Asp) in MUTYH, and a likely pathogenic duplication of exon 7 in MSH2 (Figure 1). The c.1187G>A (p.Gly396Asp) variant is a common cause of MUTYH-associated polyposis in individuals of Northern European ancestry and experimental studies have shown that this missense variant disrupts MUTYH protein function (Aretz et al., 2006; Ali et al., 2008). While the exact position of the exon 7 duplication in MSH2 was not conclusively determined, the most likely explanation is that it occurs in tandem, which would likely result in a frameshift leading to a premature translational stop signal and an absent or disrupted MSH2 protein. A similar duplication of exon 7 in the MSH2 gene has been reported previously in a patient affected with colorectal cancer (Casey et al., 2005). Both MUTYH and MSH2 variants were confirmed by using an appropriate orthogonal method. 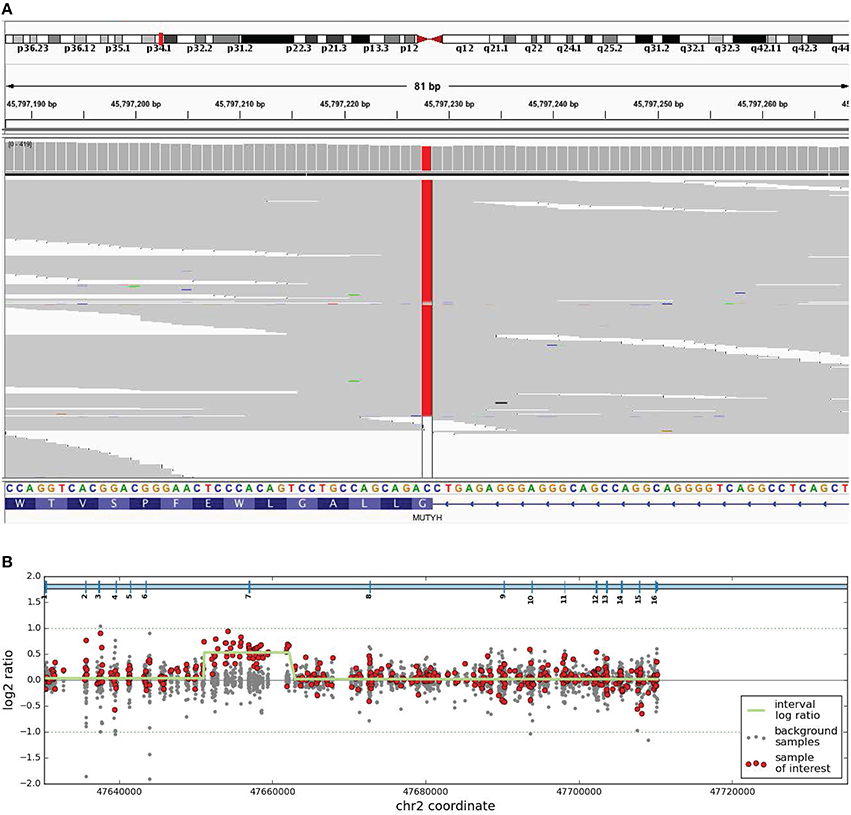 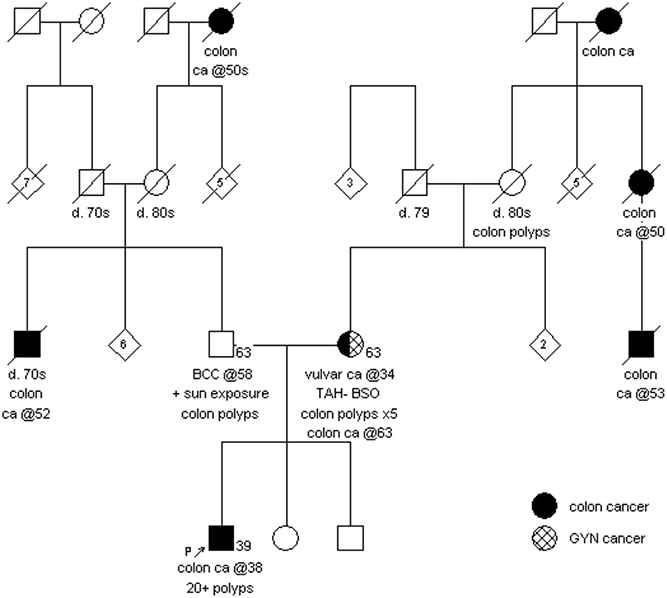 Figure 2. Family history as reported by proband and his mother.

Genetic testing confirmed that each parent was heterozygous for the pathogenic variant c.1187G>A (p.Gly396Asp) in the MUTYH gene. The proband's mother was also found to carry the likely pathogenic duplication in the MSH2 gene.

Lynch syndrome is an autosomal dominant condition caused by a pathogenic variant in one of four mismatch repair (MMR) genes or in EPCAM, a gene involved in epithelial cell adhesion. Lynch syndrome is characterized by an increased risk for colorectal cancer, as well as cancers of the endometrium, ovary, stomach, small intestine, hepatobiliary tract, urinary tract, and brain (Kohlmann and Gruber, 2004/2014; Cohen and Leininger, 2014). The lifetime risk for cancer among individuals with Lynch syndrome ranges widely, depending on the specific mismatch repair gene that is involved. The lifetime risk for colorectal cancer associated with a pathogenic variant in MSH2 approaches 60%, and females with a pathogenic variant in MSH2 have up to a 40% lifetime risk for endometrial cancer.

This case demonstrates several points about genetic testing in the era of next generation sequencing (NGS) panel testing. First, had an immunohistochemistry-guided approach to testing been followed for the proband, the likely pathogenic variant in MSH2 would have been missed. It appears in this case that the proband's rectal cancer was a result of the biallelic pathogenic variants in the MUTYH gene, which would not have resulted in absent MSH2 staining in his tumor. Conversely, his mother's tumor appears to be a result of a MMR pathway defect that did result in absent MSH2/MSH6 staining. A panel was chosen for the proband in this case due to his diagnosis of colon cancer at a very young age, the presence of colon polyps, the presence of colorectal cancer in his father's family and the possible gynecologic (at the time unknown) cancer in his mother. There is some recent evidence that the incidence of pathogenic variants among individuals diagnosed with colon cancer at a very young age is high, with as many as 14–35% of individuals with colon cancer under age 35 found to carry a pathogenic variant in a variety of different genes (Chubb et al., 2015; Mork et al., 2015). Even considering a broader age range with diagnoses of colon cancer up to the age of 50, as many as 15% had an underlying pathogenic variant in a hereditary cancer gene (Pearlman et al., submitted).

The inheritance patterns for these two genetic conditions are different. Lynch syndrome is autosomal dominant and MAP is autosomal recessive. This has significant implications to family members. Had only the biallelic pathogenic variants in the MUTYH gene been identified, the proband's children would have been falsely reassured that they were just carriers of a single MUTYH variant. Surveillance recommendations for individuals who are carriers of a single MUTYH pathogenic variant are not well defined, but typically would include colonoscopy every 5 years, similar to recommendations for individuals with a first-degree relative with colorectal cancer (Stoffel et al., 2014; Provenzale et al., 2015). Surveillance for individuals with a pathogenic variant in MSH2 is very different, with annual colonoscopy recommended beginning at age 25 (Provenzale et al., 2015; Syngal et al., 2015). In addition, surveillance for other cancers may be considered, such as upper endoscopy, due to the risks for other cancers associated with Lynch syndrome. Finally, females are at increased risk for endometrial and ovarian cancers with Lynch syndrome, so hysterectomy after childbearing should be considered. As there is variable expression of MAP and Lynch syndrome in general, the identification of additional patients with combined diagnoses would be necessary to make more definitive conclusions regarding cumulative cancer risks.

SC, CT, and RB contributed to the acquisition of the information for this case report. SC drafted the manuscript, and it was reviewed and approved by all three authors.

CT is an employee of Invitae Corporation, a testing laboratory that furnished the 7-gene panel test results used in this study.

The other authors declare that the research was conducted in the absence of any commercial or financial relationships that could be construed as a potential conflict of interest.

The Authors would like to thank the family, who provided written consent to allow us to report this case. The Authors also acknowledge the following individuals: Marina Rabideau and Federico Monzon for assistance with clinical interpretation of data; Michael Kennemer and Scott Fay for technical assistance with figure images.

Copyright © 2016 Cohen, Tan and Bisson. This is an open-access article distributed under the terms of the Creative Commons Attribution License (CC BY). The use, distribution or reproduction in other forums is permitted, provided the original author(s) or licensor are credited and that the original publication in this journal is cited, in accordance with accepted academic practice. No use, distribution or reproduction is permitted which does not comply with these terms.