Rathke's Cleft Cyst as Origin of a Pediatric Papillary Craniopharyngioma

A 6-year old patient presented with an intra and suprasellar cystic lesion accompanied with impairment of the hypothalamic-pituitary axis and partial hypopituitarism. The most likely cause of sellar lesions in this age group are adamantinomatous craniopharyngioma (adaCP) or Rathke´s cleft cysts (RCCs). AdaCP are characterized by CTNNB1 mutations accompanied with aberrant nuclear beta-catenin expression. RCC show neither nuclear beta-catenin expression nor BRAF mutation. The latter is a hallmark of papillary craniopharyngiomas (papCP) that exhibit remarkable histological similarity with metaplasia of RCC. Diagnosis of the patient was elucidated by CTNNB1 and BRAF mutation screening, utilizing different approaches, as well as histological examination of markers, e.g., beta-catenin, claudin-1, EpCAM and the mutated BRAFV600E protein, which are known to be differentially expressed in sellar lesions. The case presented reveals extraordinary aspects for two reasons. Firstly, the lesion appeared clinically, on MRI, intraoperatively and histologically as RCC with prominent squamous metaplasia, but showing an expression pattern of markers also found in papCP, whilst exhibiting a hitherto undescribed BRAFV600E mutation. This important result documents a supposable transition of RCC metaplasia into a papillary craniopharyngioma (papCP). Secondly, this intriguing case shows unexpectedly that although papCP usually occurs almost exclusively in adults, it can also arise in childhood.

A 6 year old child progressively developed polydipsia and polyuria with a fluid intake of more than 4 l per day since April 2016. Interestingly, the child was hospitalized for several days only 1 month prior in another hospital with abacterial meningitis without any laboratory abnormalities. Laboratory tests revealed a central diabetes insipidus and the MRI displayed an intra and suprasellar, cystic, slightly contrast enhancing mass (Figure 1). Further endocrinological evaluation indicated a slightly elevated prolactin level and a thyroid and somatotrophic insufficiency resulting in short stature (106 cm, 16 kg; both below 3rd percentile). In addition to the MRI, a CT-scan showed no calcifications of the 26 × 18 × 26 mm cystic tumor with light compression of the optic chiasm. 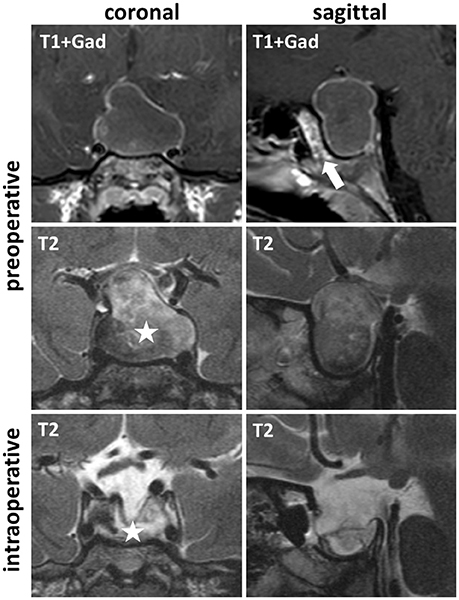 The most common cystic intrasellar lesions with suprasellar extensions in the pediatric population are adamantionomatous craniopharyngiomas (adaCP), accounting for nearly 50% of sellar lesions in childhood, and Rathke´s cleft cysts (RCC) (Schroeder and Vezina, 2011). Cysts of adaCP are filled with a viscous machine oil-like fluid containing cholesterol crystals and cell debris. However, solid components of the lesion are typically comprised of calcifications and wet keratin interspersed between epithelial components (Louis et al., 2016). The latter are characterized by activating mutations in the CTNNB1 gene encoding beta-catenin (Sekine et al., 2002; Buslei et al., 2005). The immunohistochemically evident cytoplasmic and nuclear accumulation of beta-catenin in distinct cells represents a diagnostic hallmark of adaCP, setting them apart from other sellar lesions, e.g., RCC or papillary craniopharyngiomas (papCP) (Buslei et al., 2005).

RCC filled with a protein containing fluid arise from the pars intermedia between the anterior and posterior lobe of the pituitary gland. Although RCC are diagnosed in pediatric patients, this is a generally rare event (Fan et al., 2012; Trifanescu et al., 2012). Up to 87% of the cysts show suprasellar enlargement (Schroeder and Vezina, 2011). The cyst wall is composed of ciliated columnar or cuboidal epithelium containing goblet cells (Schweizer et al., 2015). It is worth noting that in 5–17% of RCC cases, squamous metaplasia is observed (Potts et al., 2011), which exhibits striking histological similarities with the well differentiated non-keratinizing squamous epithelium of papCP (Louis et al., 2016), thereby often rendering histological classification challenging. This second, also benign craniopharyngioma subtype, occurs less frequently than adaCP and is characterized by a BRAF mutation (Brastianos et al., 2014) resulting in an up to 500-fold increased activation of v-raf murine sarcoma viral oncogene homolog B1 (BRAF) (Cantwell-Dorris et al., 2011). BRAF regulates the conserved RAS-RAF-MEK-ERK (MAPK) pathway as an intermediate, controlling important cellular processes, e.g., proliferation, differentiation and survival. Interrupting excessive signaling in recurrent papCP provides a promising therapeutic option (Aylwin et al., 2015; Brastianos and Santagata, 2016; Brastianos et al., 2016). Based on the histological similarity of both entities, studies have been initiated to determine if papCP arise from squamous metaplasia of RCC. However, BRAF mutational analysis was identified as a reliable tool for distinguishing both lesions in recent studies, as RCC with squamous metaplasia show no BRAF mutation (Kim et al., 2015; Marucci et al., 2015; Schweizer et al., 2015). It is worth noting that four cases of previously diagnosed RCC were re-classified as papCP because they were BRAFV600E positive (Marucci et al., 2015; Schweizer et al., 2015). This illustrates the level of difficulty involved in histological evaluation and implies a transformation of RCC into papCP, which emphasizes the importance of mutational analysis for correct grading. In contrast to adaCP which are particularly prevalent (Louis et al., 2016) in children but also in adulthood, “papCP occur almost exclusively in adults …” as stated in the new WHO Classification of Tumors of the Central Nervous System (Louis et al., 2016).

Surgical Treatment and Path to Diagnosis

Since the sphenoid sinus of the 6-year-old child was not pneumatized, a surgical approach and resection was performed with neuronavigation guidance and intraoperative MRI for resection control.

After a microsurgical, sublabial, paraseptal approach, the sphenoid bone was drilled until the basal sellar dura was widely exposed. After incision, a yellowish fluid was drained and the cyst completely collapsed. A thin membrane was identified and subtotally resected, leaving some remnants on the diaphragm sellae. Intraoperative MRI revealed a complete evacuation of the cystic component (Figure 1, asterisk). At the end of the procedure, minor CSF-leakage was detected and sealed with fibrin-glue and some facia lata of the right thigh.

The post-operative course was uneventful and no further endocrinological deficiency was detected. The patient was discharged 9 days post-surgery.

The intraoperative appearance of the cyst content with its viscous consistency, yellowish color and lack of the typical hallmarks of a craniopharyngioma-like cholesterol crystals and a thick, microcalcified membrane, raised the clinical diagnosis of an RCC rather than a craniopharyngioma. 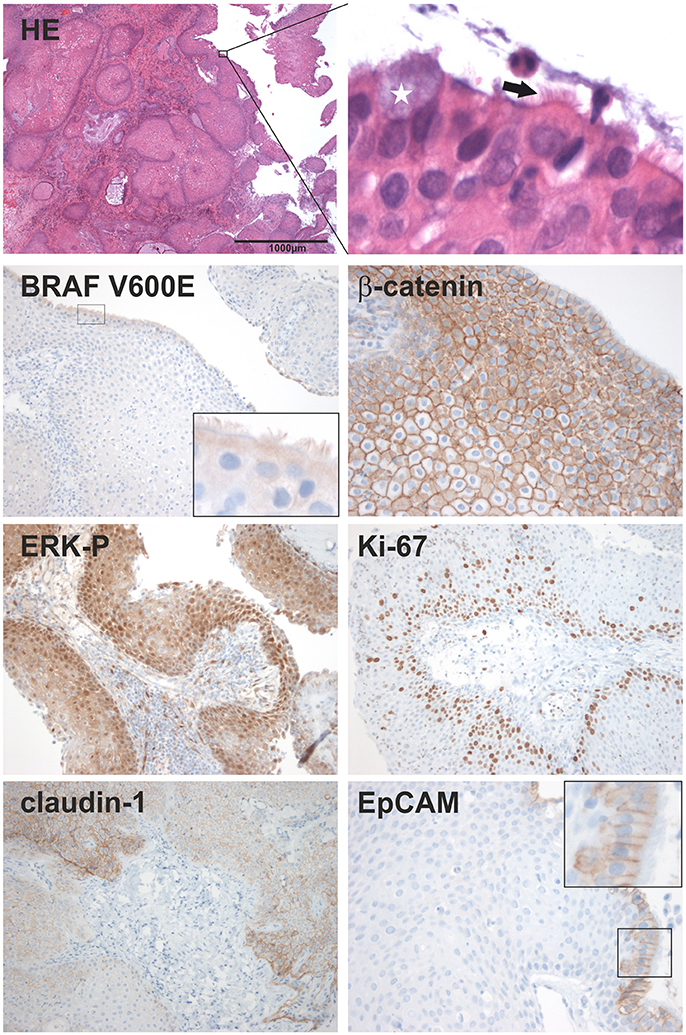 Figure 2. Histological characterization; HE staining shows a lesion of squamous couple stone differentiated epithelium. Magnification revealed a superficial cell layer harboring kinocilia (arrow) and goblet cells (white star). The following immunohistochemical stainings show the evidence and expression pattern of the mutated BRAF V600E protein, beta-catenin; the phosphorylated ERK (ERK-P) and the proliferation marker Ki-67; as well as the distribution of the cell-cell contact proteins, claudin-1 and EpCAM. In a higher resolution, EpCAM is only detectable in ciliated cells of the superficial cell layer. 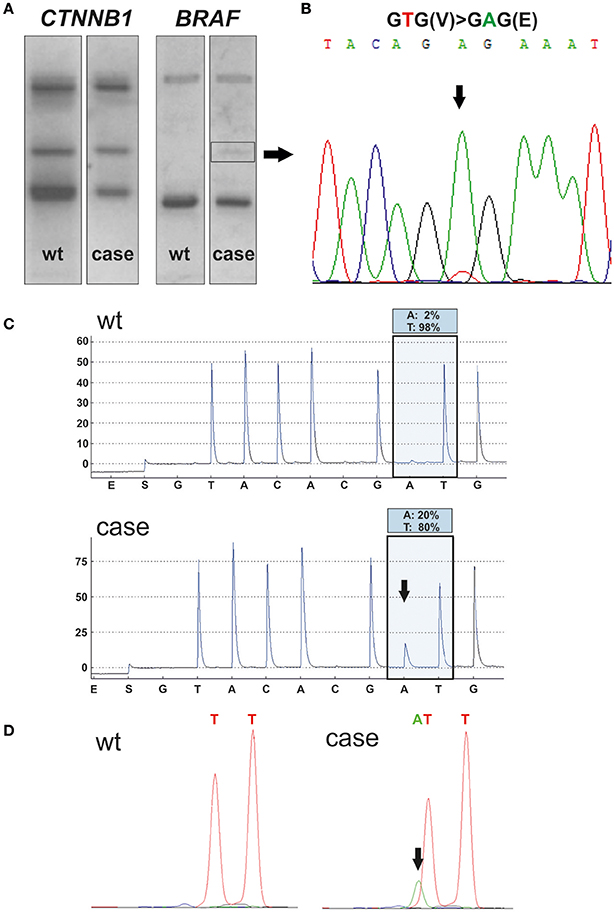 Figure 3. Mutational analysis; SSCP analysis of the hot spot region of CTNNB1 (exon 3) and BRAF (exon 15) was performed using DNA extracted from the formalin fixed, paraffin embedded resected tissue of the child (case line) (A). Wildtype DNA (wt line) was used as a control and to compare mutation induced aberrant bands. Only BRAF showed a shifted band (square), revealing in Sanger sequencing a BRAFV600E mutation with a thymine (T) to adenine (A) transversion (B). Pyrosequencing (C) confirmed BRAFV600E mutation (allele frequency of A: 20%), compared to the wt control (allele frequency of A: 3%). Pyrosequencing was performed twice in the department of neuropathology and department of pathology with comparable results. SNapShot analysis (D) confirms thymine to adenine transversion (arrow) in relation to wt control, which leads to an amino acid exchange of valine to glutamic acid at codon 600 within the BRAF gene.

For the sake of completeness, adaCP diagnosis, which is common in the pediatric age group, was excluded by the histomorphological appearance of the lesion and by beta-catenin analysis. Neither an immunohistochemically nuclear accumulation of beta-catenin (Figure 2; Buslei et al., 2005) nor mutations within exon 3 of the CTNNB1gene using SSCP (Figure 3A) and Sanger sequencing (data not shown) were detectable.

Furthermore, there was no histological evidence for Langerhans cell histiocytosis. This histiocytic tumor was excluded because it occurs mostly in childhood, could also be seen in the hypothalymic-pituitary region, and carries a BRAFV600E mutation in 38–58% of cases (Louis et al., 2016).

This is the first report describing a pediatric patient with a sellar mass lesion that appears clinically and histologically as an RCC with pronounced metaplastic squamous epithelium but harbors a BRAFV600E mutation representing a hallmark of papCP. Therefore, this supports the assumption that papCP could originate from RCC. Additionally, this intriguing case unexpectedly shows that papCP can occur in childhood.

The patients' parents/legal guardians provided written informed consent for research participation as well as for the publication of the child's indirectly identifiable information. All methods used were carried out in accordance with the approved guidelines of the Ethical Committee of the University of Erlangen-Nürnberg and in accordance with the Declaration of Helsinki.

We are indebted to Diana Maron, Tajana Jungbauer, Birte Rings, Verena Popp, Petra Badorf, and Verena Kollera for their expert technical assistance. This study was funded by the German Research Foundation DFG (NP-DFG_BU 2878/2-1) and the Internationale Stiftung Neurobionik. We acknowledge support by Deutsche Forschungsgemeinschaft and Friedrich-Alexander-Universität Erlangen-Nürnberg (FAU) within the funding programme Open Access Publishing.

Copyright © 2018 Schlaffer, Buchfelder, Stoehr, Buslei and Hölsken. This is an open-access article distributed under the terms of the Creative Commons Attribution License (CC BY). The use, distribution or reproduction in other forums is permitted, provided the original author(s) and the copyright owner are credited and that the original publication in this journal is cited, in accordance with accepted academic practice. No use, distribution or reproduction is permitted which does not comply with these terms.