An Autosomal Translocation 73,XY,t(12;20)(q11;q11) in an Infertile Male Llama (Lama glama) With Teratozoospermia

Michelle A. Kutzler3 and

Structural chromosome abnormalities, such as translocations and inversions occasionally occur in all livestock species and are typically associated with reproductive and developmental disorders. Curiously, only a few structural chromosome aberrations have been reported in camelids, and most involved sex chromosomes. This can be attributed to a high diploid number (2n = 74) and complex chromosome morphology, which makes unambiguous identification of camelid chromosomes difficult. Additionally, molecular tools for camelid cytogenetics are sparse and have become available only recently. Here we present a case report about an infertile male llama with teratozoospermia and abnormal chromosome number 2n = 73,XY. This llama carries an autosomal translocation of chromosomes 12 and 20, which is the likely cause of defective spermatogenesis and infertility in this individual. Our analysis underlines the power of molecular cytogenetics methods over conventional banding-based chromosome analysis for explicit identification of normal and aberrant chromosomes in camelid karyotypes. This is the first case of a translocation and the first autosomal aberration reported in any camelid species. It is proof of principle that, like in other mammalian species, structural chromosome abnormalities contribute to reproductive disorders in camelids.

Numerical and structural chromosome abnormalities are well-documented causes of congenital abnormalities and reproductive disorders in all livestock species (reviewed by Villagomez et al., 2009; Raudsepp and Chowdhary, 2016; Szczerbal and Switonski, 2016). Aberrations such as aneuploidies, deletions and duplications result in genetic overdose or haploinsufficiency, and may severely affect viability, development and/or reproduction. Translocations and inversions, on the other hand, are often balanced and do not cause loss or gain of the genetic material. Consequently, phenotypic effects of balanced rearrangements may not be so obvious regarding the viability and appearance of the carrier. However, balanced structural rearrangements affect meiosis and gametogenesis, resulting in reduced fertility or infertility (Villagomez et al., 2009; Ghosh et al., 2016; Raudsepp and Chowdhary, 2016). Regardless, chromosome abnormalities are of concern in all livestock species and cytogenetic analysis is a routine approach for evaluating breeding animals and for testing animals with reproductive or developmental problems (Villagomez et al., 2009; Ducos et al., 2008; Lear and Bailey, 2008; Raudsepp and Chowdhary, 2016; Szczerbal and Switonski, 2016).

Compared to other domesticated species, clinical cytogenetics in alpacas, llamas and other camelids has progressed slowly. The first description of camelid karyotypes 50 years ago showed that all species have the same diploid number (2n = 74) with essentially similar chromosome morphology (Taylor et al., 1968). Since then, only a handful of reports have been published on chromosome aberrations in llamas and alpacas (reviewed by Raudsepp, 2014). These include only sex chromosome aneuploidies: two cases of X-monosomy (Hinrichs et al., 1997; Tibary, 2008), one case of X-trisomy (Tibary, 2008), two cases of XX female-to-male sex reversal (Wilker et al., 1994; Drew et al., 1999), and a dozen cases of XX/XY blood chimerism (Fowler, 1990; Hinrichs et al., 1997, 1999). So far, only two structural abnormalities have been described in camelids. One is the Minute Chromosome Syndrome, which has been found in infertile female alpacas and llamas (Drew et al., 1999; Tibary, 2008; Avila et al., 2014b; Fellows et al., 2014) and involves the smallest autosome, chromosome 36 (Avila et al., 2015). The second is an autosomal translocation in an infertile male llama that has been briefly and incompletely described in a study, whose main goal was the development of molecular cytogenetics tools for camelids (Avila et al., 2014b).

Procurement of blood and tissue samples followed the United States Government Principles for the Utilization and Care of Vertebrate Animals Used in Testing, Research and Training. The protocols were approved by Institutional Animal Care and Use Committee as AUP #2009-115, AUP #2018-0342CA and CRRC#09-47 at Texas A&M University and ACUP #3817 at Oregon State University.

A physically normal male llama born in 2000 was referred for andrological and cytogenetic evaluation due to infertility. At the time of referral, the animal was 3 years old and had never sired a cria, despite multiple breeding attempts to different fertile females.

Scrotum and testes were palpated for consistency to ensure that no gross pathology was present in the external genitalia. Testicular size was measured mechanically with sliding calipers. Testes and accessory glands were imaged with a real-time ultrasound scanner using a 5 MHz probe (Sonovet SV600, Universal Medical Systems Inc.) and testicular blood flow was measured in the marginal (MA) and supratesticular arteries (TA) by Doppler ultrasonography with an L12-5 probe (Kutzler et al., 2011).

Samples for karyotyping included peripheral blood in Na-heparin (Becton Dickinson) as well as an ear clip in sterile Hank’s balanced salt solution containing 1X Antibiotic-Antimycotic solution (Gibco). The ear clip was used to establish primary fibroblast cultures. Metaphase chromosome preparations were obtained from short-term blood lymphocyte cultures or skin fibroblast cultures, according to standard procedures (Raudsepp and Chowdhary, 2008; Avila et al., 2014b). Chromosomes were stained with Giemsa for initial counting. Refined chromosome analysis and karyotyping were carried out by GTG banding (Seabright, 1971). Images for 20 cells were captured for each technique using an Axioplan2 microscope (Carl Zeiss) and IKAROS (MetaSystems GmbH) software. Twenty cells were karyotyped and chromosomes were arranged into karyograms following the nomenclature proposed by Balmus et al. (2007) and adopted for the alpaca by Avila et al. (2014b).

DNA Isolation and Analysis of Sex Chromosomes by PCR

Painting probes generated from flow-sorted alpaca X and Y chromosomes (Avila et al., 2014b) were used to test the presence and integrity of sex chromosomes. The origin of the autosomal translocation was investigated through series of dual-color FISH experiments with chromosome-specific markers (BAC clones from CHORI-246 BAC library1 derived from the alpaca whole genome cytogenetic map (Avila et al., 2014a). BAC DNA isolation, labeling and FISH were performed following standard protocols (Raudsepp and Chowdhary, 2008; Avila et al., 2014b). Images for a minimum of 10 metaphase spreads were captured for each experiment and analyzed with a Zeiss Axioplan2 fluorescence microscope equipped with Isis Version 5.2 (MetaSystems GmbH) software.

On physical examination, no general or reproductive abnormalities were found in the male llama. The testicles were of normal palpable consistency and size (Table 1). Ultrasonographic imaging of the testes and accessory sex glands revealed no abnormalities, with both the prostate and bulbourethral gland showing a typical homogeneous echotexture. Testicular blood flow measurements were within normal range for camelids (Table 2; Kutzler et al., 2011).

However, analysis of semen samples from six consecutive days, revealed that the percentage of morphologically normal sperm (Figure 1A) was low and ranged from 31.3 to 40.5% (Table 3). The most common abnormality observed was an abnormally thickened midpiece (Table 3 and Figure 1B), which occurred in 10.8–20.7% of the sperm evaluated. The occurrence of nuclear vacuolation was also high, ranging from 3.3 to 13.7% (Table 3 and Figure 1B). The semen abnormalities that were observed by light microscopic examination were confirmed and refined by TEM analysis. The latter showed the presence of both acrosomal (Figure 2A) and nuclear vacuolations (Figure 2B) as well as several sperm with abnormal axoneme formation (Figure 2C). Based on these findings, we concluded that the phenotypically normal-looking llama (Figure 3A) has severe teratozoospermia. 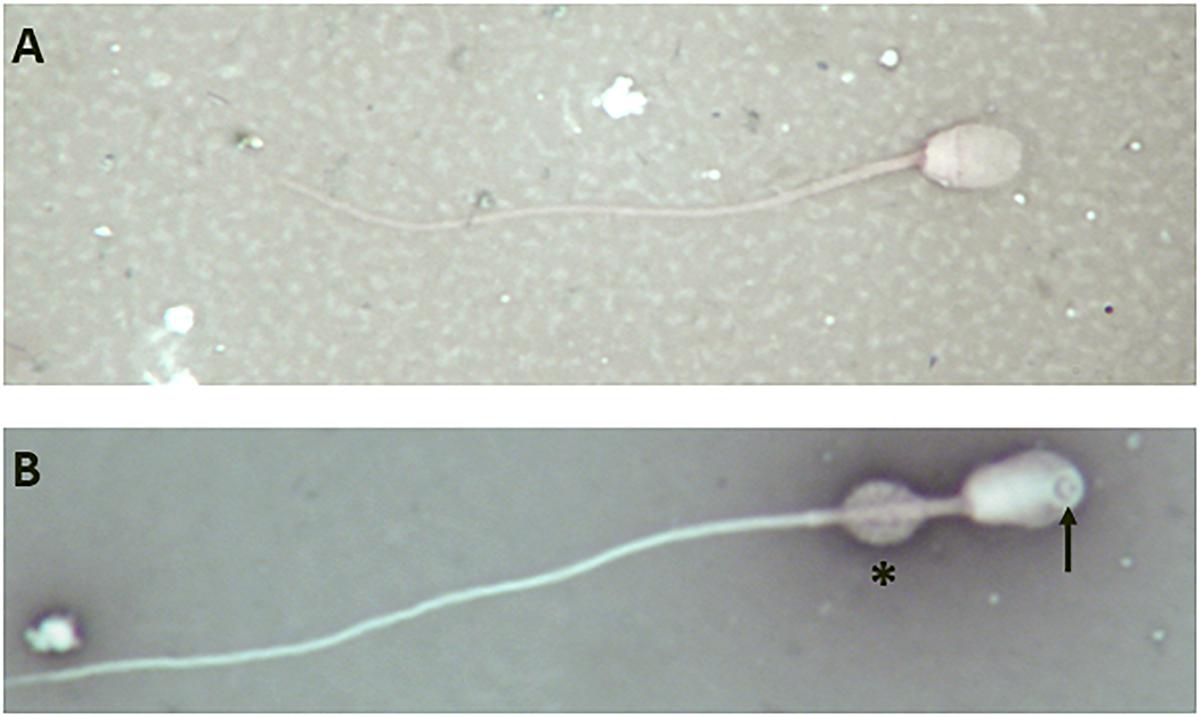 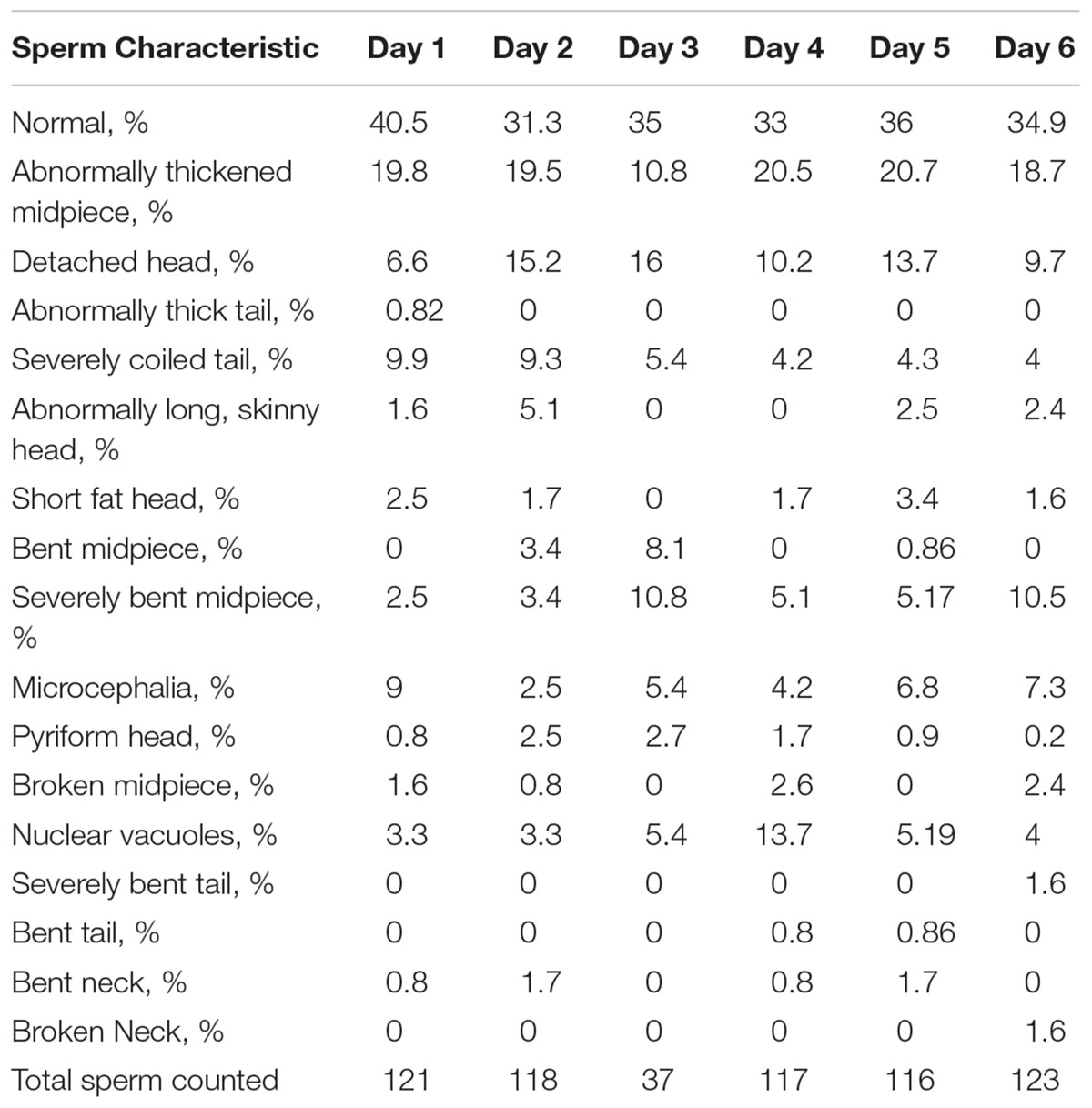 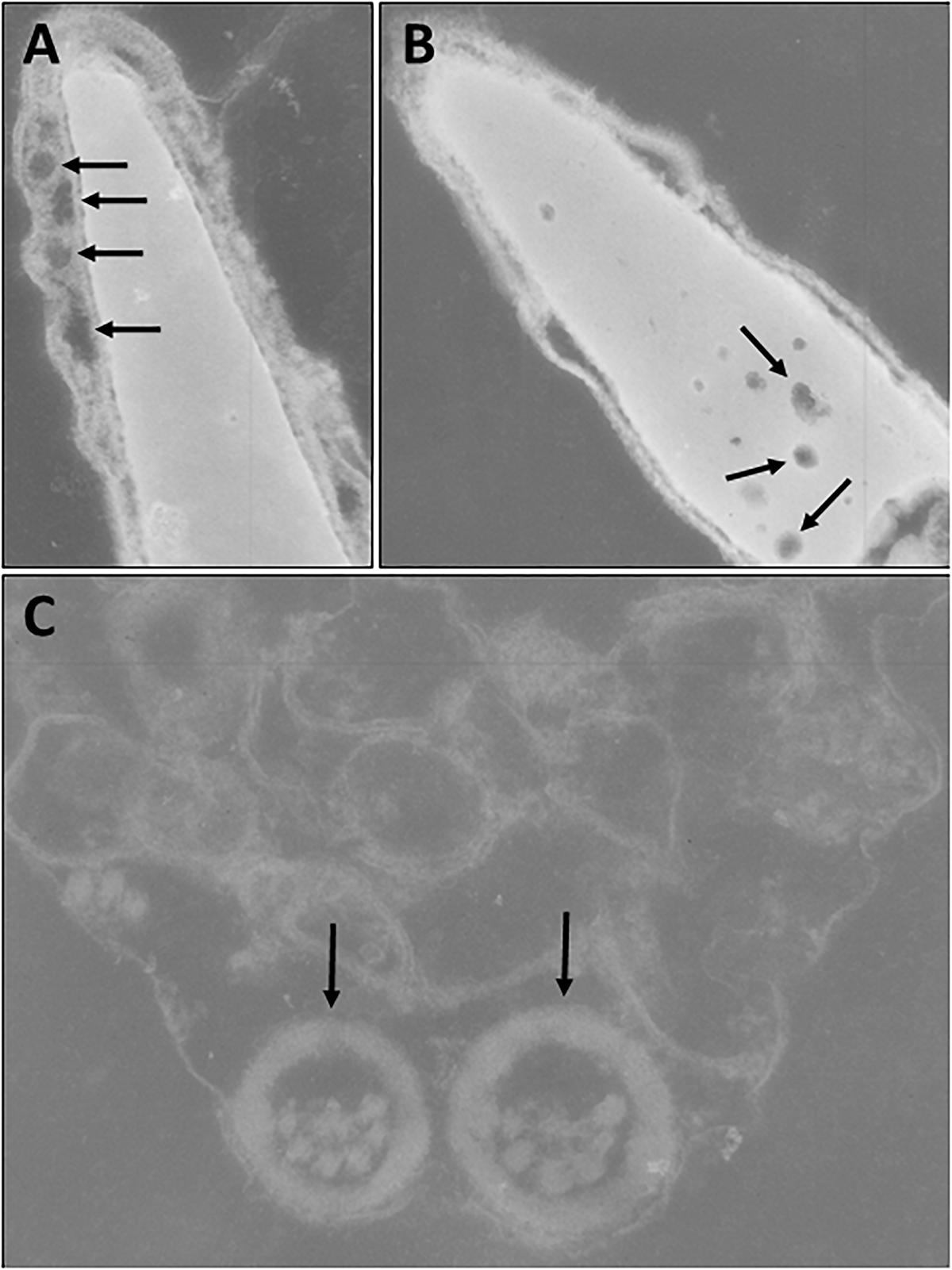 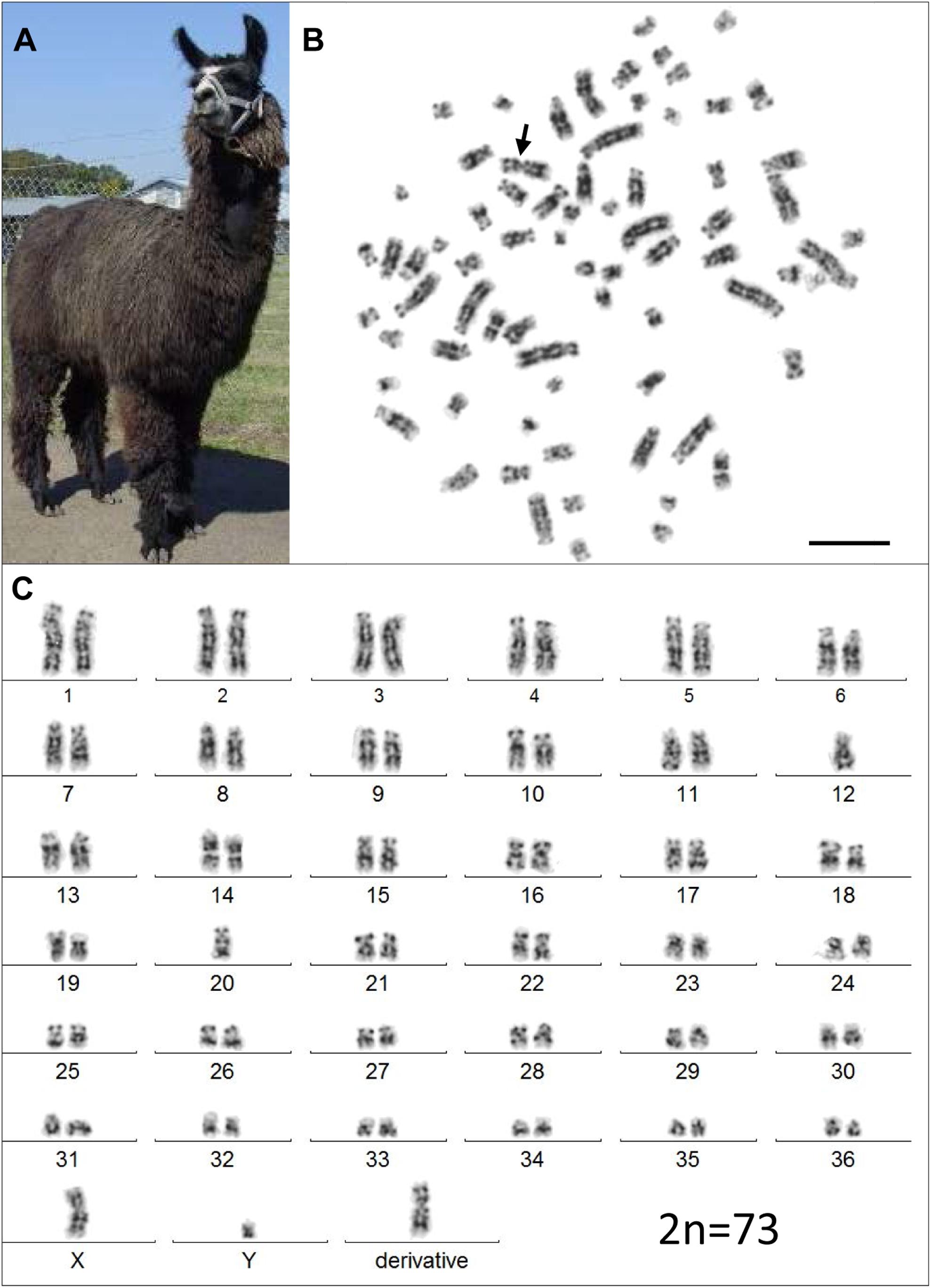 Figure 3. The infertile male llama and his karyotype. (A) The male llama showing overall normal appearance and viability. (B) A GTG-banded metaphase spread with the derivative chromosome (arrow). (C) Its corresponding karyotype (2n = 73). Bar 10 μm.

Analysis of genomic DNA by PCR showed that the llama was positive for both the SRY and the AR genes, the expected profile of normal males. While FISH results demonstrated that the derivative chromosome harbors the long arms (q-arms) of chr12 and chr20 (Figure 5), we could not trace the location of the short arms (p-arms) of these chromosomes because no DNA markers have been, as yet, mapped to these regions (Avila et al., 2014a). On the other hand, if the fusion occurred between chr12p and chr20p (Figure 5C), additional rearrangements had to have taken place to define the centromere of the derivative chromosome. Thus, we consider the fusion of short arms unlikely. It is more plausible that the derivative chromosome resulted from a centric fusion of chr12q and chr20q, with subsequent loss of 12p and 20p. This is in keeping with observations that the short arms of most camelid chromosomes are heterochromatic and vary in size between individuals, as well as between homologs as shown by C-banding (Bianchi et al., 1986; Di Berardino et al., 2006; Balmus et al., 2007; Avila et al., 2014b). The fact that gene sequences have been assigned to the long arms of all 36 alpaca autosomes, but only to short arms of 6 of these (Avila et al., 2014a), further suggests their heterochromatic nature. It must be noted that because C-banding does not allow chromosome identification in camelids, it was not possible to evaluate heterochromatin in chr12p and 20p by this method. Attempts to combine C-banding with FISH for chromosome identification were also unsuccessful. However, heterochromatin at camelid centromeres and chromosome arms is AT-rich and stains bright with DAPI (black with inverted DAPI), which is the case with chr12p and chr20p (Figure 5B). Therefore, we theorize that the translocation did not cause loss of functionally important genetic material in somatic cells and can be considered as a balanced translocation. This is consistent with the overall normal appearance and viability of the carrier llama (Figure 3A).

Balanced translocations typically disturb meiotic pairing and segregation, resulting in the production of both genetically balanced and unbalanced gametes (Ghosh et al., 2016; Raudsepp and Chowdhary, 2016). The latter, if involved in fertilization, will cause embryonic death and, thus, subfertility of the translocation carrier. Such cases have been abundantly described in all livestock species (Ghosh et al., 2016; Raudsepp and Chowdhary, 2016; Szczerbal and Switonski, 2016). The llama in the present study has a more pronounced abnormal reproductive phenotype (teratozoospermia and sterility) than cases previously described in other livestock species, suggesting that the translocation may have disrupted function of genes important for normal spermatogenesis and/or fertilization. For example, camelid chromosome 20 is homologous to human (HSA) chromosome 6p and harbors the major histocompatibility complex (MHC) and a cluster of genes encoding for cysteine rich secretory proteins – the CRISP genes (Avila et al., 2014a). Of these, CRISP3 was cytogenetically mapped very close to the presumed translocation break/fusion point (Figure 5C). CRISP proteins are expressed in the male reproductive tract and have known roles in sperm function, sperm-egg interactions, and overall fertility in many mammalian species, including camelids (Waheed et al., 2015; Gottschalk et al., 2016; Fedorka et al., 2017). The counterpart of the translocation, chr12, is homologous to HSA12q and part of HSA22 (Balmus et al., 2007; Avila et al., 2014a; Figure 5C), but no male fertility genes have been mapped to this camelid chromosome. Therefore, even though the involvement of CRISP3 in the translocation is an appealing target for speculation, the molecular consequences of this rearrangement remain unknown and will be particularly interesting for follow-up.

In summary, we described the first chromosomal translocation in camelids, its likely causative relationship with teratozoospermia and infertility, and demonstrated the power of molecular cytogenetic approaches for the detection of structural aberrations in species with complex karyotypes. Characterization of molecular and functional consequences of such rearrangements, however, requires further research and improved knowledge about camelid genomes.

MK and TR initiated and designed the study. MB, FA, MK, PD, and TR conducted experimental work and data analysis. MB, FA, and TR wrote the manuscript with input from all authors.

Tibary, A. (2008). “Reproductive disorders in alpacas and llamas,” in Proceedings of the 1st International Workshop on Camelid Genetics, (Scottsdale, AZ), 22–24.

Copyright © 2019 Baily, Avila, Das, Kutzler and Raudsepp. This is an open-access article distributed under the terms of the Creative Commons Attribution License (CC BY). The use, distribution or reproduction in other forums is permitted, provided the original author(s) and the copyright owner(s) are credited and that the original publication in this journal is cited, in accordance with accepted academic practice. No use, distribution or reproduction is permitted which does not comply with these terms.

Genomic Advances and Challenges in Old and New World Camelids